Story By: Will Oliver

Photos By: Alex Fleming & Will Oliver

The journey to The King of the Hammers begins months or even years before cars roll up to the starting line. Watching a car leave the line at Hammers is the embodiment of thousands of hours poured out by a dedicated team of individuals, all with a passion for racing. Be it a team of high school buddies or a team of engineers from one of the leading off-road manufacturers, there is a place for everyone to compete in the King of Hammers, and it’s this very thing that draws race teams from all across the country to compete.

The action starts on the lakebed in Johnson Valley a couple of weeks before race day. The teams arrive early to put the car through its final tuning before the big day. Teams take advantage of the resources provided to them by their sponsors on the lakebed to dial in each component of the car.

One of the most crucial is shock tuning. Having suspension dialed in can be the deciding factor between crossing the finish line first or having your car rattled apart in the desert. Teams will set aside hours to do quick passes through the desert, making small adjustments to the valving in their shocks until they are perfect.

Outside of the small tweaks and adjustments, teams will dedicate a couple of days to pre-running the current year’s course. Each year the King of the Hammers course is altered. While many of the trails remain the same between races, the rock canyons of Johnson Valley remain open to the public year-round. They are subject to change, as people attempt the brutal obstacles in their recreational vehicles. The team inside the car needs to have a strong understanding of what they will be up against on race day and find their own lines through the tight canyons.

The next step is developing a race-day pit strategy. The Hammers is a no-chase race. Teams are not allowed to follow their car through the desert or canyons to provide pit support. It is up to the drivers to get their vehicle to the next pit location if they are to fix it. Teams have to plan out how they will divide up their resources across the three different pit locations.

Final checks are done the night before the race. Teams must inspect and mark every bolt on the car. Verifying that everything is tight and is exactly as it should be. One mistake here could mean an early end to the teams’ race day. Once all of the pieces are in place, it is time to race.

Race day starts around 6:00 am, as teams wake up to the cold morning and the sound of cars roaring to life. It’s all hands on deck as tools and fuel are loaded into the pit trucks for the day. The car is escorted to its spot in the starting line-up an hour before the race kicks off.

In the line-up it’s common to see families out, supporting their car and drivers; hugging their kids, and thanking their family for the opportunity. Little children are walking around starstruck by the massive cars and pit teams standing around the car, silently thinking about the long day ahead.

Following the flyover and National Anthem, drivers start their cars and begin rolling to the starting line. The green flag drops and the race day has begun. Spaced 30 seconds apart, cars begin tearing off into the desert. Behind the scenes, pit crews start racing to their own dedicated locations for the day.

There are three pit locations on race day. The first is in the desert and is considered to be a fuel-only pit by many teams. The second is Main Pit, located on the start/finish line of the race. Teams use the second pit to address any critical issues before the cars head out to complete their rock laps. The third is tucked away in the rock canyons and is often a heavy repair pit for teams. The hammers trails are brutal, and this pit is usually the closest place for the teams to get parts on their car.

During the 10+ hours of racing, not only are the drivers giving it all they have, but the pit teams are constantly trying to maintain contact with their car. Communication is difficult both due to the extreme distances, and intense canyons that the cars are climbing through. Teams in the pits are often left watching the live stream or waiting for some small bit of info over the radio.

Teams often hope that their team’s car bypasses the pit entrance altogether, a sign the car is running strong. But in the event they don’t, the team is on standby, ready for anything.

Without a moments notice, a team’s driver could yell over the radio that they are coming in. The team will be forced into action as the car rolls onto their dedicated tarp. The team will then begin fueling a car, swapping a tire, or chasing down some issue the driver has been feeling. When things get serious, it’s commonplace for the guys from the pit next door to come racing over to lend an extra hand or supply a tool a team might have forgotten back home. The teams at the Hammers really are a tight-knit community and believe in helping get everyone across the finish line on race day.

While a few teams will cross the finish line in the afternoon of race day, for many, the race drags on into the night. Teams go into survival mode as they do whatever it takes to get the car across the finish line before the time cut off. It’s around this time that families and teams gather under the Jumbotron of Hammertown and watch patiently for their car to roll across the line.

As each car crosses the line, the crowd cheers, and the media swarms the car. Finishing a race at The King of the Hammers is a massive accomplishment. As the cars roll off the stage, following their brief interview, the teams begin to celebrate. With an attrition rate of over fifty percent, the teams that finish have truly completed The World’s Toughest One-Day Race. 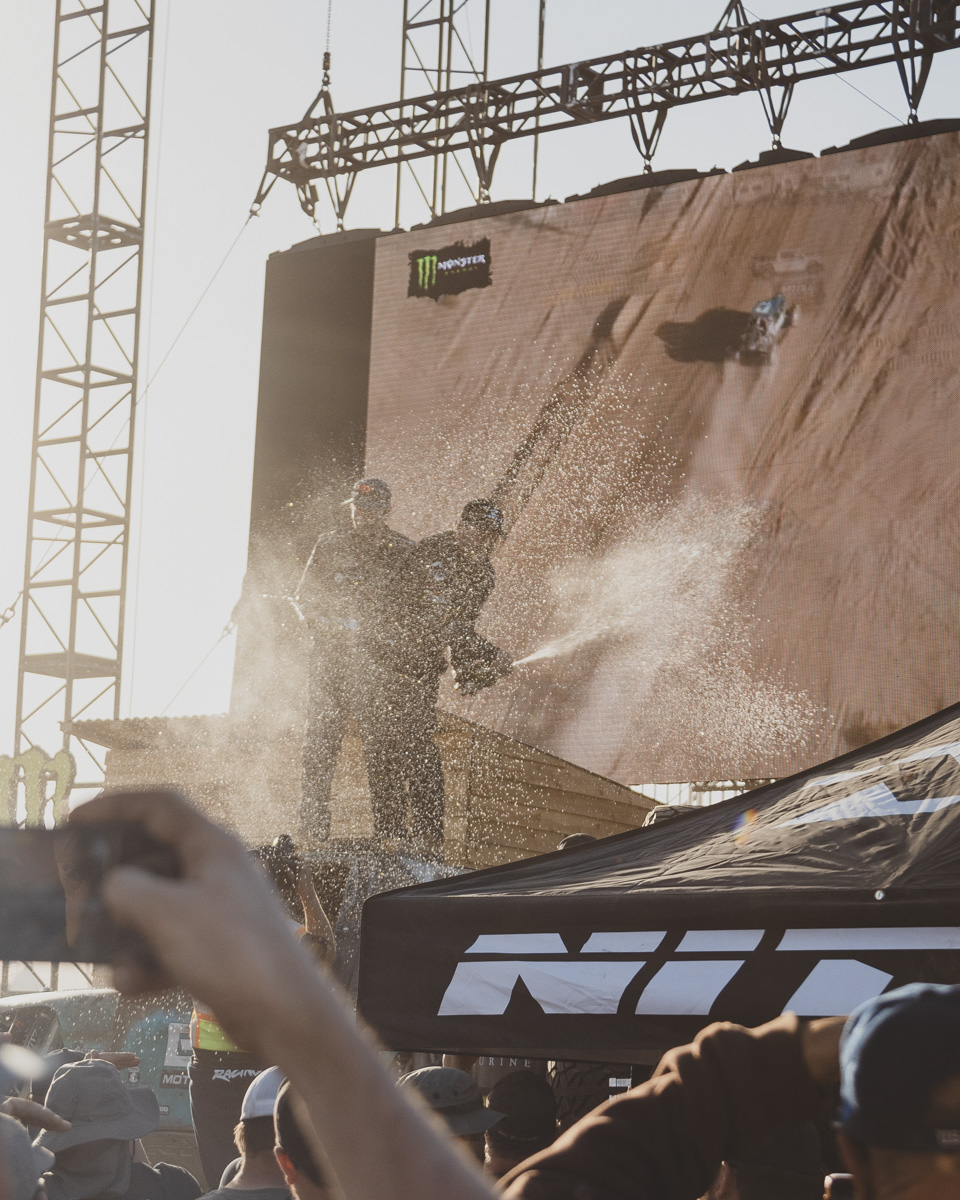 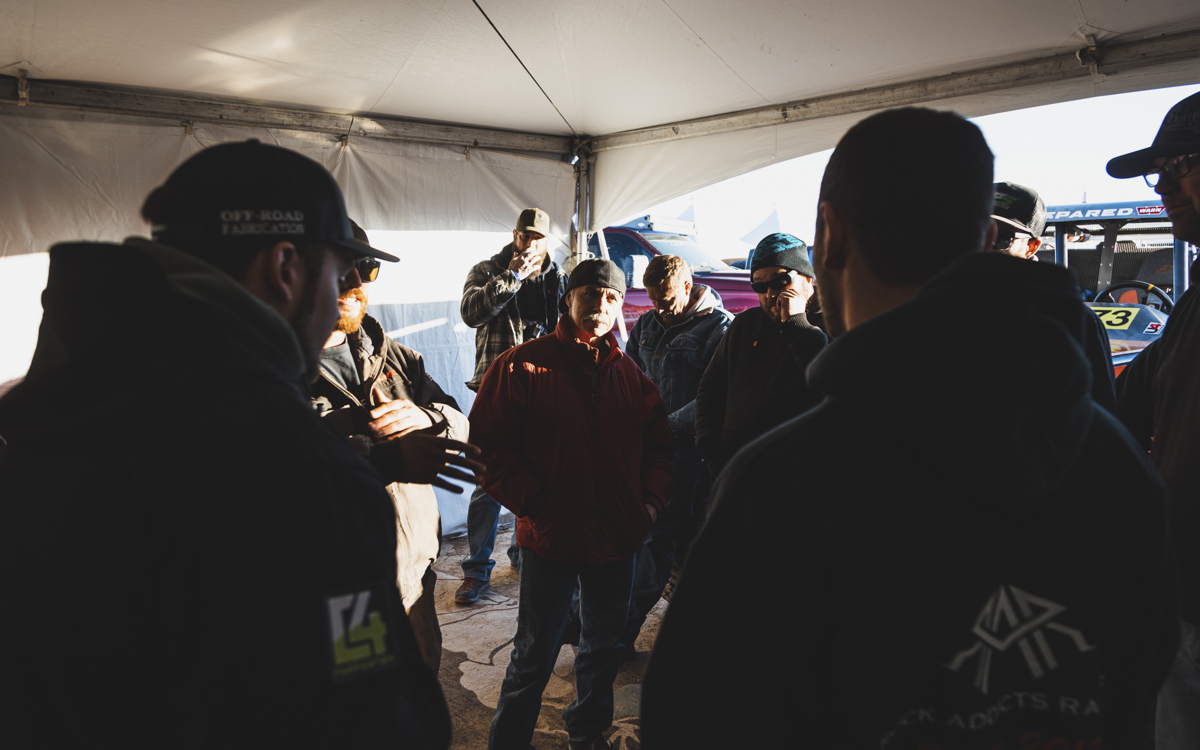 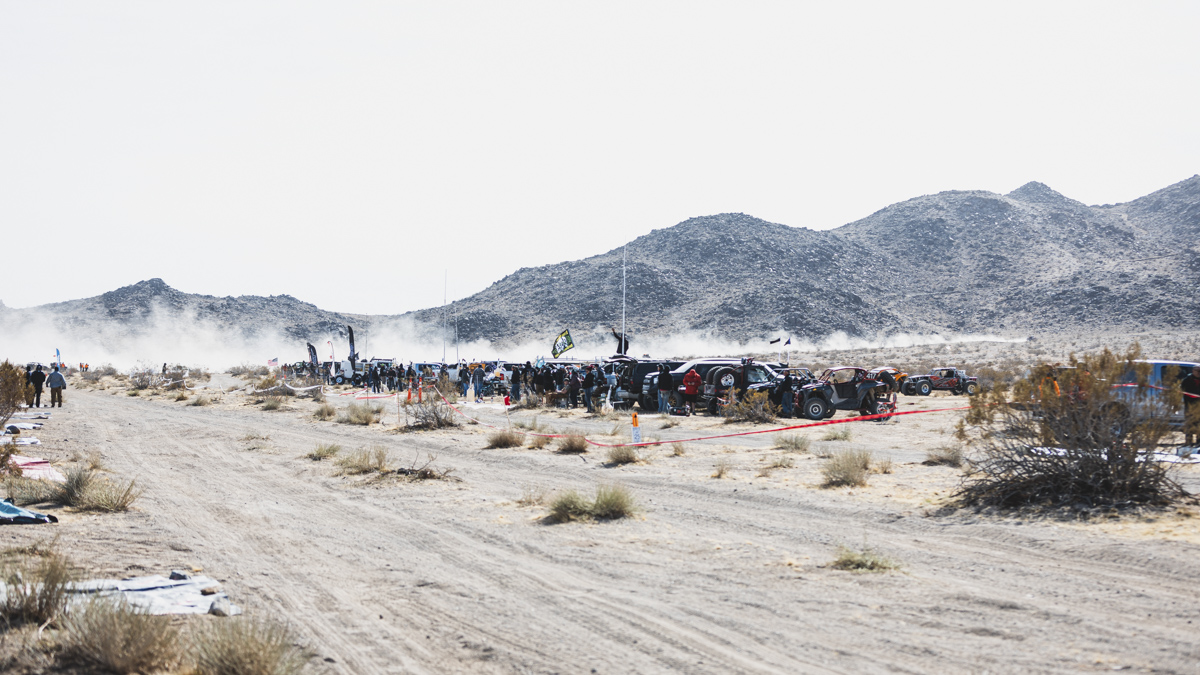 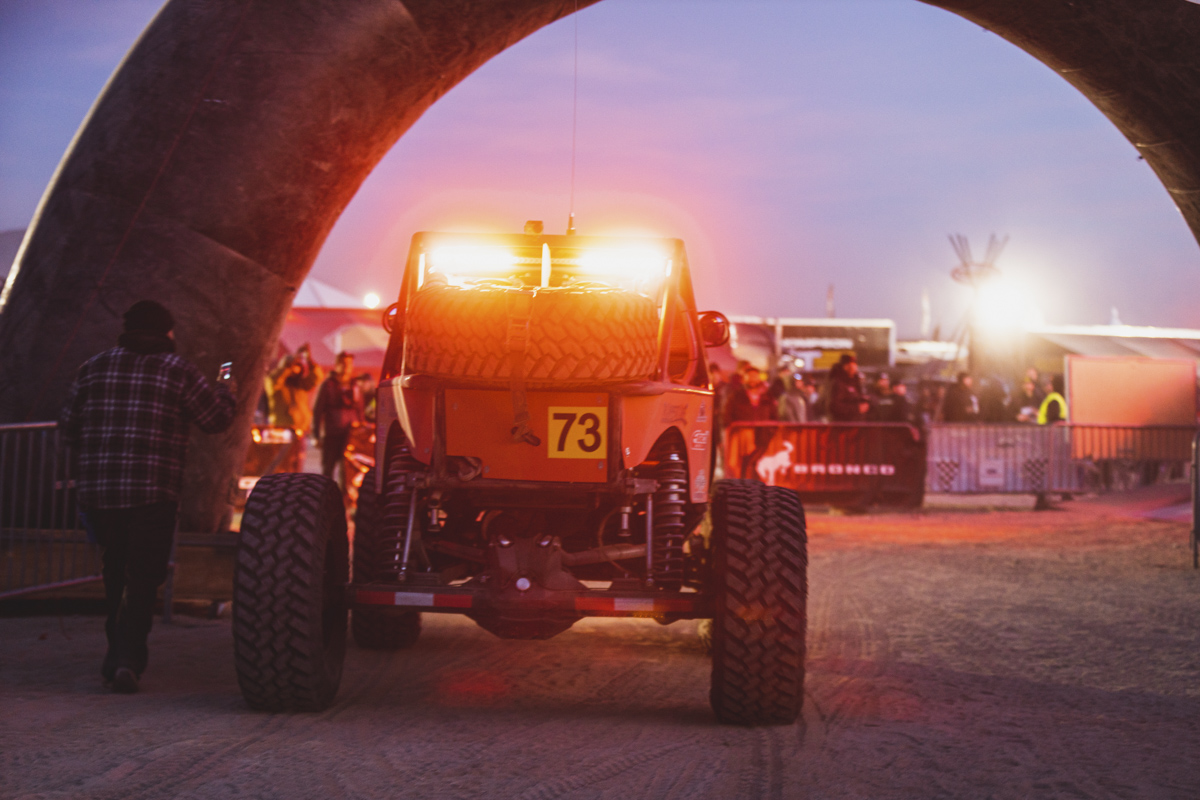 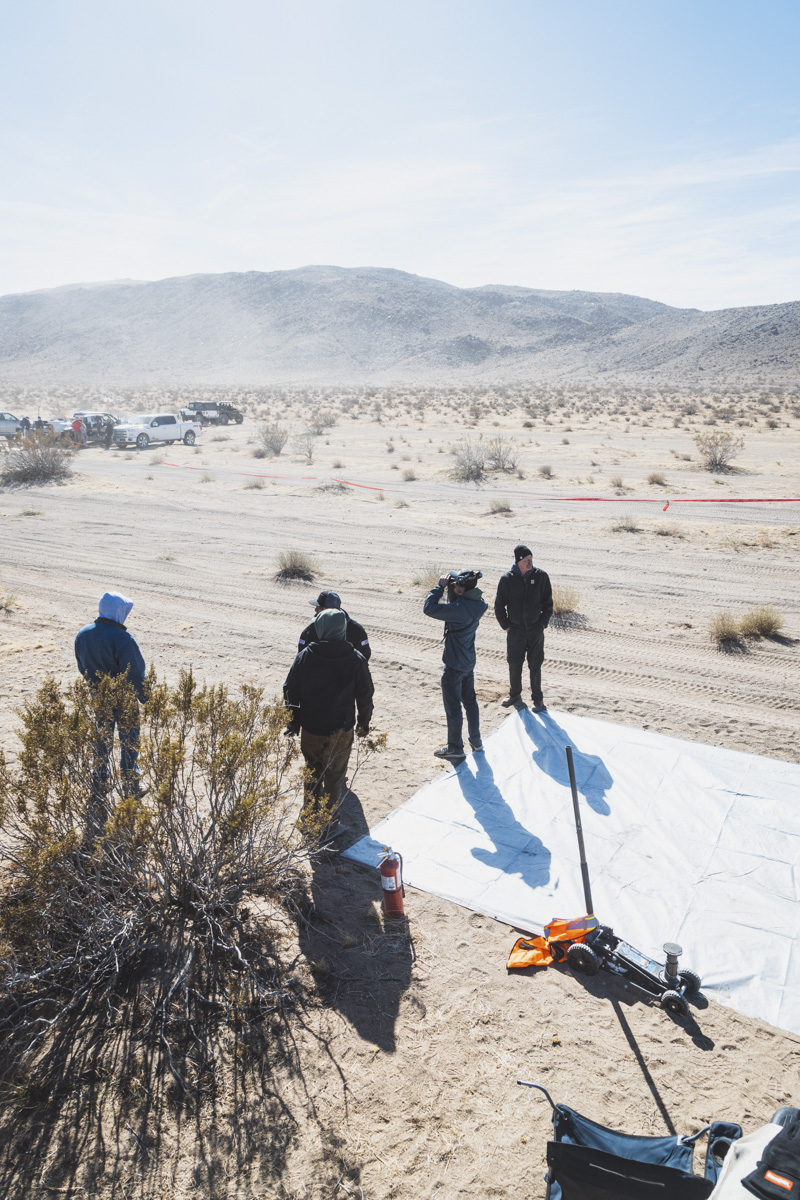 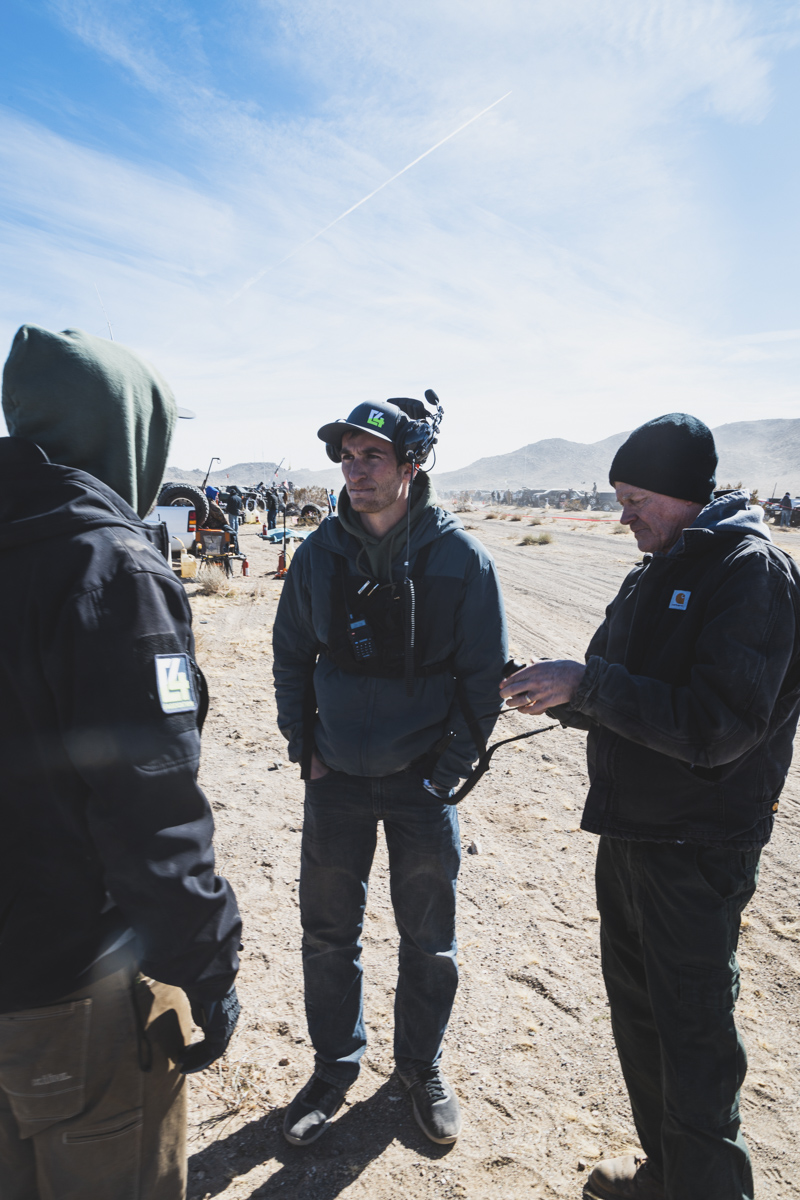 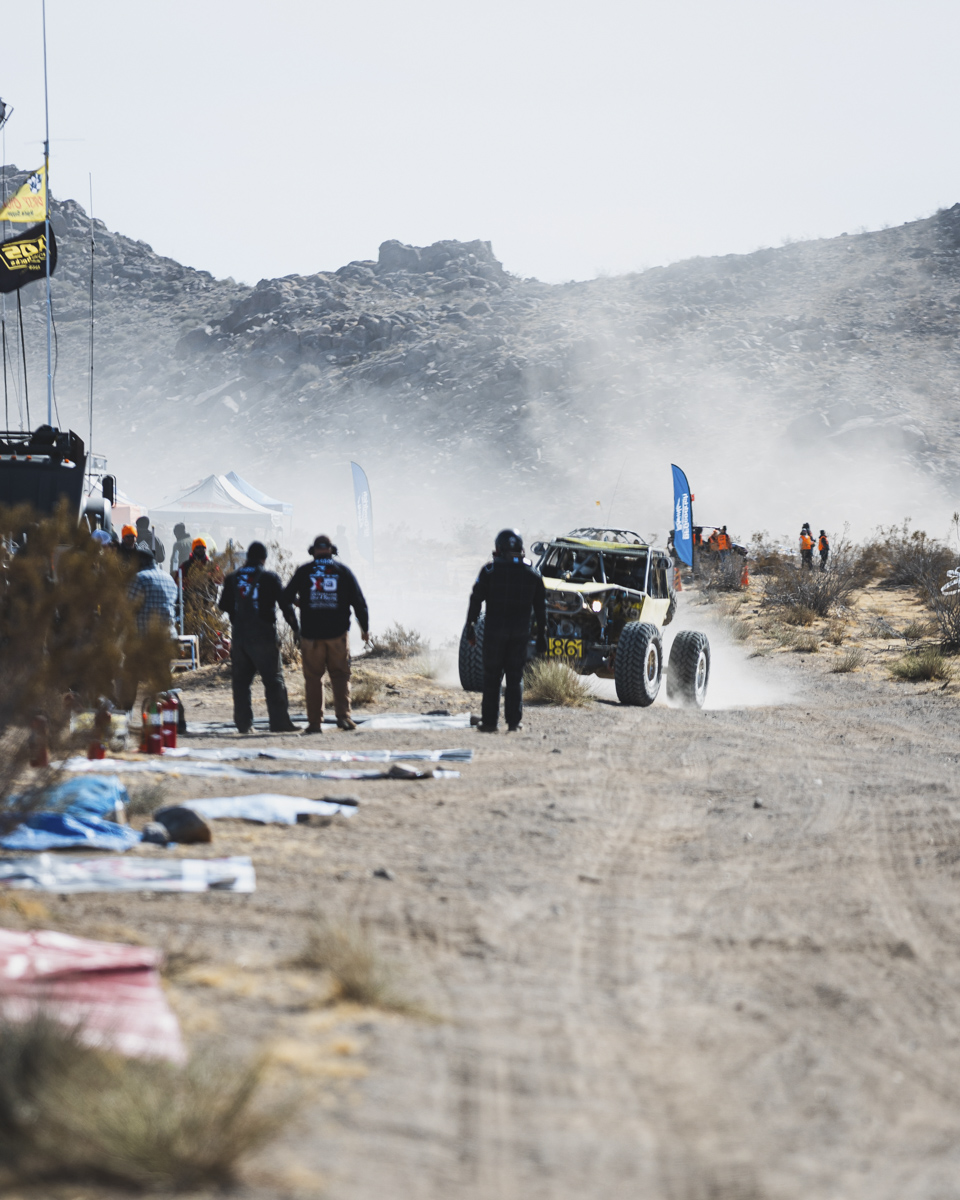 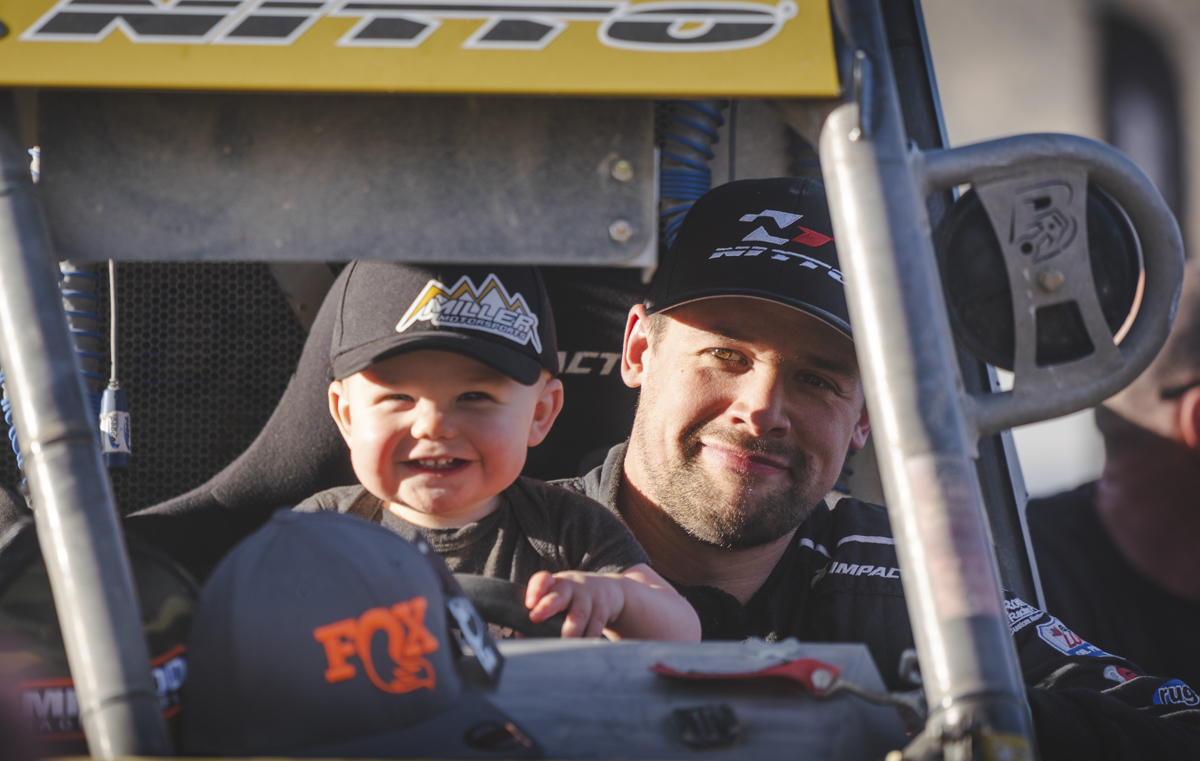