From humble beginnings less than fifteen years ago, the hardest one-day race has blown-up into crazy proportions. Now, even the extra events, outside of the “big” race, are some of the most prestigious, toughest, and biggest. The UTV race had over one hundred thirty entrants.
The fiercely competitive Everyman Challenge had legends and stock classes battling it out. There was a ‘mini’ Baja for the 1000 horsepower desert racing trucks with a cool $100K winners check.
This year’s KOH continued to defy belief with its growth. But, more than its size and brutality, the main race couldn’t have been scripted any better to be any more thrilling.

Qualifying was just a short blast over the hill outside Hammertown and a loop back again… but this being KOH, where the levels of off-roading extremities are unimaginable anywhere else, it served to sort the men from the boys. Allowing the cream to come to the top, pole position ended with a front row of double-king Loren Healy and triple-king Jason Scherer, new names like youngster Jordan Pellegrino and Michael Bou had a chance to shine as well. Despite being only a few seconds slower, some established names ended in the mid-pack with the Campbells and European Ultra4 champion Levi Shirley in the Top 20. Some fared even worse, though. After taking a wrong turn, another double-king Randy Slawson took the start flag from 73rd after rolling, Marcus Gomez began from dead last of the 98 starters.

This year the opening desert loop was a 77-mile affair, but far from a flat-out blast over the Johnson Valley, tracks are heavily rutted, lined by tough, spiky bushes and stones and are full of tire slashing and diff smashing rocks. With cars heading off two at a time, side by side, getting out of the first corner ahead is the first victory, and Scherer got the run on Healy to have clean air over the opening section.

The first corner was as far as Darien Gomez got. Tripping over the sandy embankment, he endured the ignominy of flipping over in the stadium and retiring before most people had even started. The car was undamaged, but Darien had hurt his back in the roll and called it. But those embarrassingly short few yards were further than the UK’s Shabs Piercy managed in his own car, shipped from Europe. After a litany of problems all week, the second engine of the week blew up in the staging area line up. With his own car out of the picture, event organizer, Dave Cole, loaned Piercy one of his Spec Class cars to race in. It wasn’t enough, Piercy was a DNF.

In the hanging dust, the frantic pace proved too much for some, with 3rd placed starter Jason Blanton only getting as far as the first pit, after such a great qualifying run. From the career-high of winning the Dakar UTV class, Casey Currie got just 20 miles before the engine blew, and another big name, Greg Adler, joined him on the sidelines. Last year’s early hero Paul Horschel showed his speed again by jumping up from 30th off the line to run 3rd on corrected time for a bit, but was another early retirement, with a broken transmission. Tom Wayes was also out on that first loop – an off-course detour to the pits to fix a broken wheel earned him a disqualification.

Through the spectacular, but not particularly challenging (for top Ultra4 racers) Cougar Buttes, the course headed back to Hammertown where the first splits were seen. Bou, runner up in last year’s Ultra4 Nationals, was in the former Scherer/Wayes Dragon and was doing well, so was Bryan Croft in a Campbell car that was built in just 31 days before the race. With such a new build, though, Croft had to take an extended pit stop to check the fluids in the not yet broken-in engine, so dropped back a bit.

Scherer also had a longer stop to check a CV boot on the susceptible Independent Front Suspension (IFS), which let Healy get away into the lead. Behind, KOH legend, Shannon Campbell lost all hope of a good finish when his gearbox had to be changed, but son Wayland had recovered from his 14th place start to be running near the front on corrected time. Josh Blyler, in a Miller Pro chassis car, with a solid axle, was also in touch with the leaders, as was Shirley and JP Gomez, both in IFS single-seaters.

Next up were two long laps of the fabled Hammer trails, including some never-before raced ones added to the now legendary Outer Limits, Jack Hammer, Claw Hammer, and others, to make a lengthy 212-mile course. But the apparent predictability of having two drivers with five titles between them vying from the lead didn’t last long, and so began a remarkable series of events. JP Gomez flew through the first proper rock section to catch up with Scherer. Then at Chocolate Thunder, not usually considered a particularly challenging trail, Scherer got hooked up on a big rock on the right side. Not wanting to wait, Gomez just drove straight over the center section to get ahead.

Also starting to do well was Cameron Steele, usually found behind the wheel of a monstrous Trophy Truck, with which he won the 2018 Baja 1000. His Lasernut IFS car also has IRS, as well as a portal axle set up, so it seemed to float over the rocks. Entering an ambitious five different classes, Steele was the only driver attempting to Ironman the whole of the KOH events: from the UTVs, Everyman Challenge, the T1 invitational race, and the Motos, the popular multi-discipline driver found himself battling with Shannon Campbell’s daughter Bailey. After retiring early from every event so far, he was hoping that his luck was going to change.

Of those who got, temporarily, into the lead, Healy was first to falter, with a transmission costing him around 20 minutes. He managed to get going again but was to come back to Hammertown an hour off the lead. Wayland began losing coolant out the top of his radiator, and he wasn’t seen again. From a healthy lead. Scherer stopped in Resolution, another suffering a driveline issue, which let JP Gomez get ahead, but he only lasted a matter of minutes before stopping with engine failure.

Shirley, struggling with an overheating transmission, didn’t make it around for the second time with the leaders, stopping with a snapped driveshaft. Seemingly from nowhere, Bailey Campbell found herself out in the lead. With her came the intriguing possibility of there being the first Queen of the Hammers. A charging Steele was behind with the Big B Racing’s Blyler pushing his Miller Pro hard. A long way back on the course, but right in the mix thanks to corrected time was Slawson, who was just a few minutes off the lead even though he’d overtaken some 70 cars. The endearingly potty-mouthed Marcus Gomez in his UFO single-seater, who had started even further back, was also within striking distance.

But everyone was behind Bailey Campbell, a very popular leader until heart-breakingly, she stopped with a water pump failure. With the live announcers doing some quick mental arithmetic to work out who was where it was assumed that Slawson now held a slim lead… for a few moments until he broke another rear diff. The lead on course was then between Steele and Blyler, who were next to each other, Blyler slipping by with a gutsy pass when Steele got bellied-out on a rock. Blyler had to get four minutes ahead on the road to win, though. But just about level on corrected time was Marcus Gomez making it a three-way fight with just minutes between them.

Back at Chocolate Thunder, for the third time, Blyler, like many others throughout the day, got a little hung up and had to smash his car over. Steele, making the central route look easy, caught right back up with him, but that proved to be his undoing as in Blyler’s dust he blindly slammed into a large rock and broke the steering. Gomez was then ahead on corrected time but had a flat tire. Fortunately, he stopped right next to Steele and his co-driver, who helped him change it with minimal time loss.

Slowed with a misfire and then with a broken limit strap, that helps protect the steering from damaging extensions, Dave Cole’s son Bailey was having to take it easy. Now in a new IFS car, he was showing great maturity. Eric Miller had made his way up to 3rd with Blyler’s father Rusty, also in a Miller Pro chassis car, also doing very well, until a broken front driveshaft made rock-crawling impossible and forced a DNF half-way around the 3rd lap.

And so Blyler was free in clear air, apart from a bit of lap traffic he needed to force his way around. Thanks to Gomez’s delay he had a free pass, and all he had to do to take a famous victory was the last run down Backdoor. The famous, and much-prized scepter was almost in sight, then to cries of astonishment from the assembled crowd, he rolled. Lying on the side at an awkward angle, it seemed to be an agonizingly slow recovery, and the win was surely gone.

With his comm system down, Marcus Gomez couldn’t have known what had happened but pushed on at breakneck speed regardless, until he hit a ditch too hard and broke the steering. Somehow, with the front wheels pointing in different directions, he managed to keep rolling. Finally, at the finish line, Blyler had to endure the longest 22 minutes of his life waiting for Gomez to appear. Teammate Miller came in physically in second place, until the clock ticked out for the popular oldest Gomez brother, and in a cry of relief, a new King was crowned.

After losing a half an hour with an electrical fault in Jack North, Miller finished 2nd physically and 3rd on corrected time. Gomez was 2nd, with a great drive for Cole to get 4th. 5th went to John Webb. Best European finish went to Spain’s Iñaki Lanzagorta Egia, who came home in 40th place, despite breaking a transfer box on his qualifying run. Three spots behind was Italy’s Fabio Manno, with just one official finisher behind him of Scooby Feagins.

Special mention must also go to some of the stars of the less covered classes, KOH newbie Hunter Miller won the Can-Am UTV race. Stephen Rogers for the insane Holley EFi Shootout for the massive rockcrawlers. Brad Lovell for once again taking the honors in the Legends class as well as overall in the EMC. Jessie Haines won the Stock class in his self-built Roxor modified in just nine days. And Bryce Menzies in the Toyo Tires Desert Invitational in his 4×4 T1 truck. 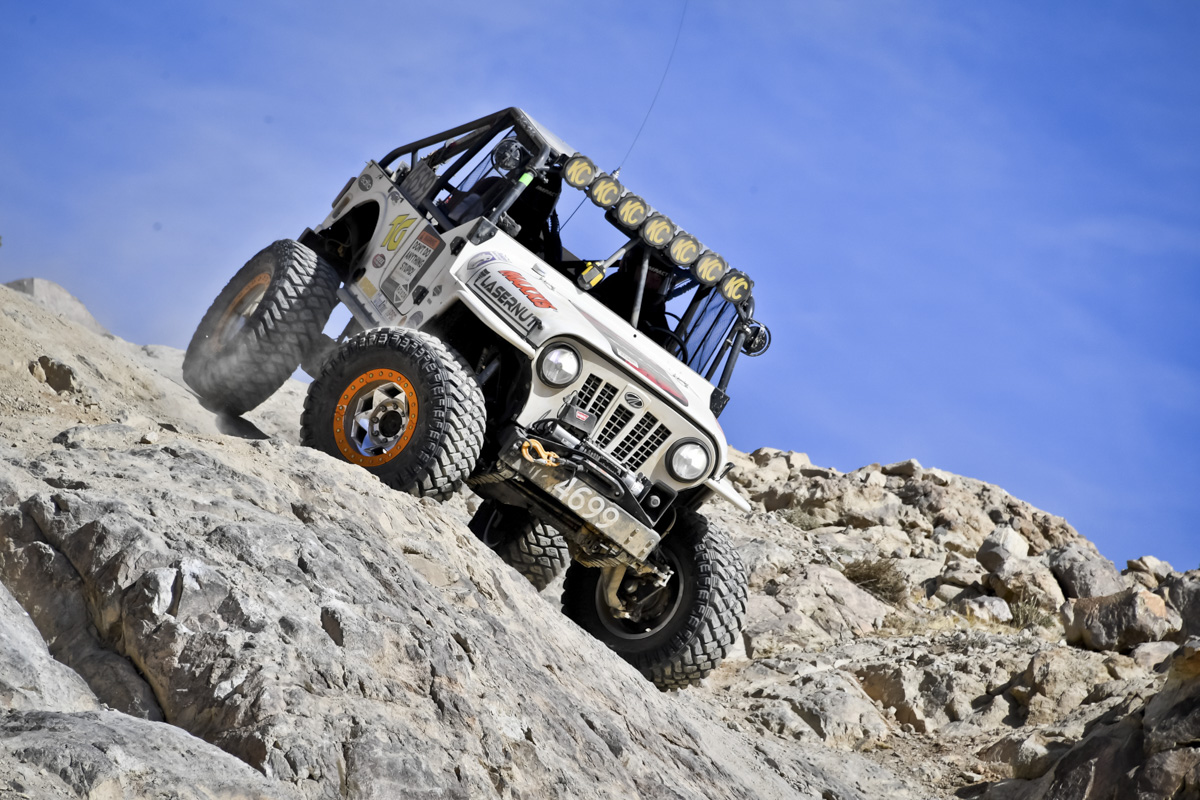 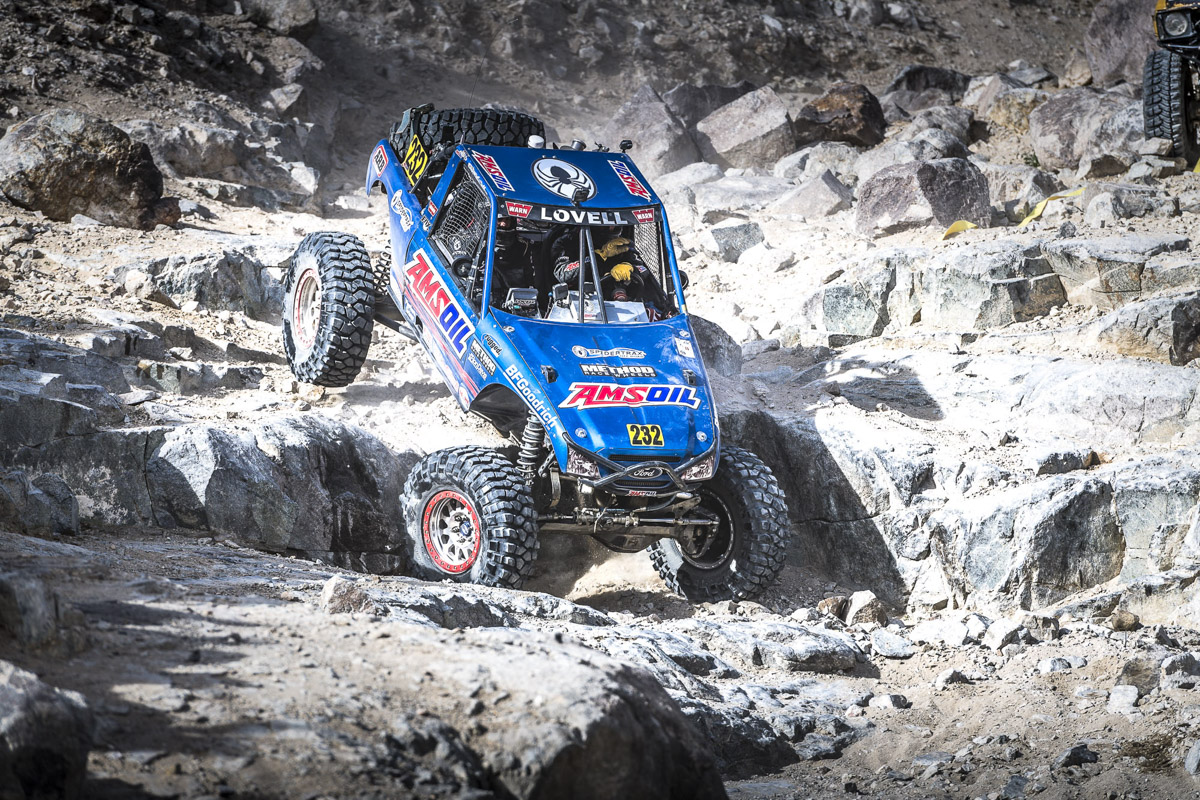 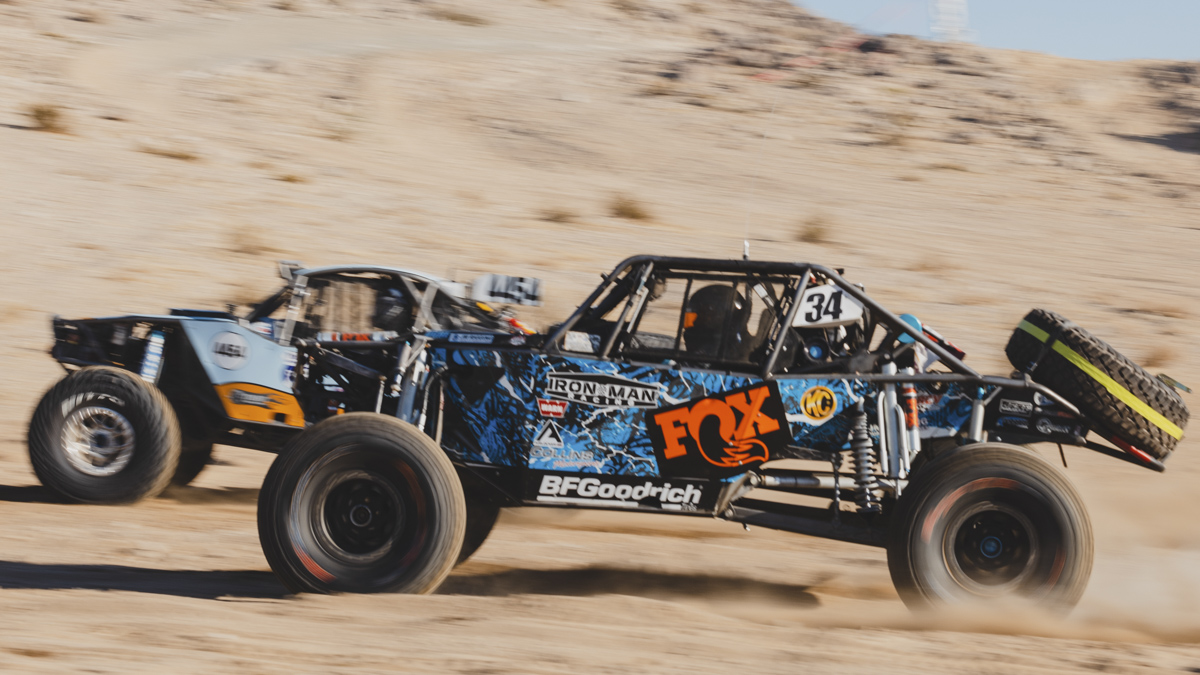 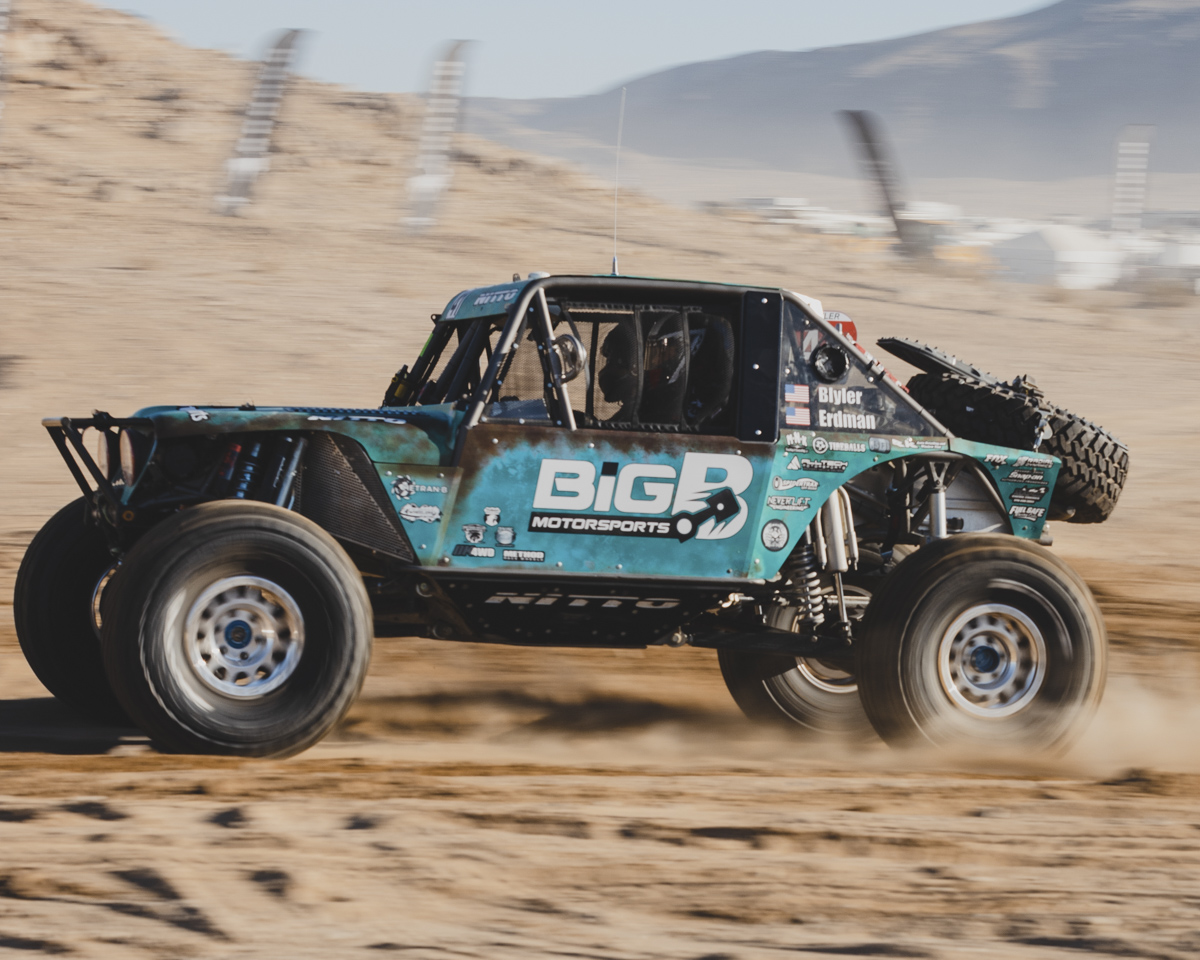 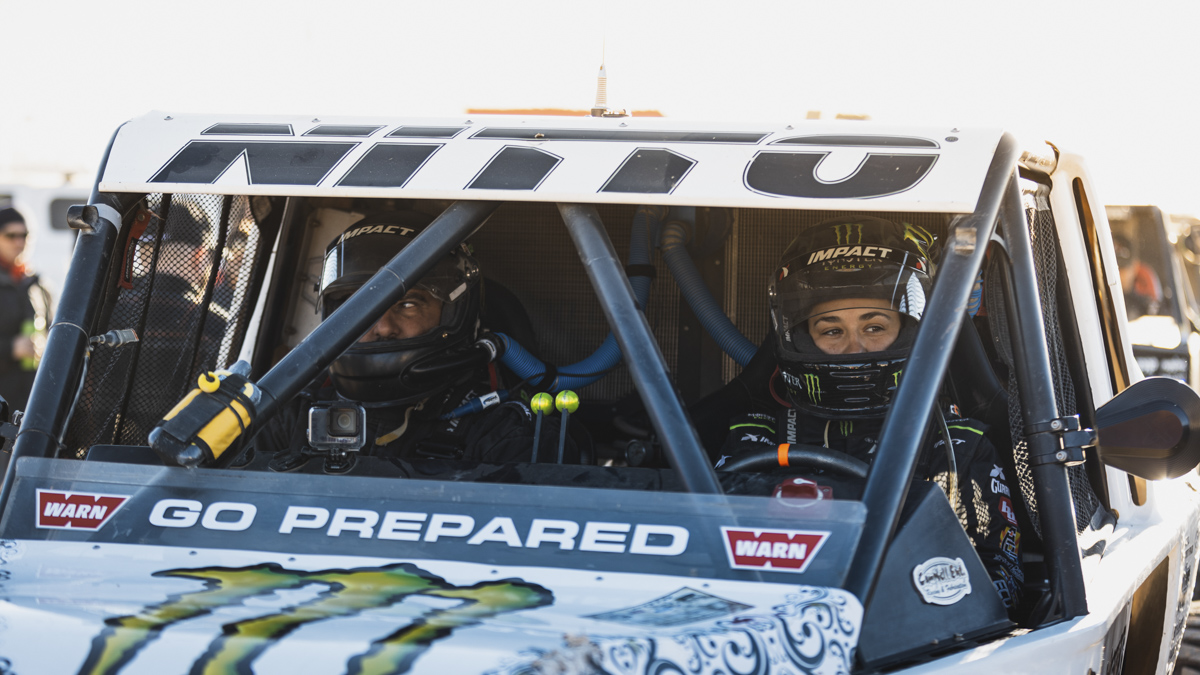 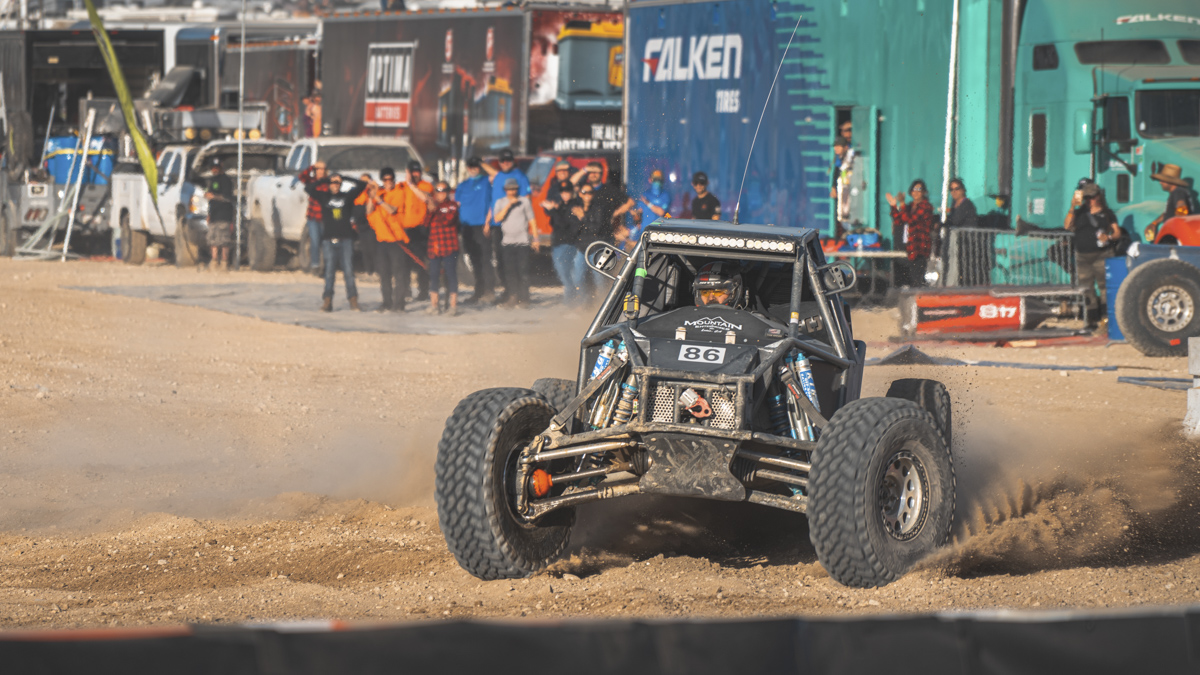 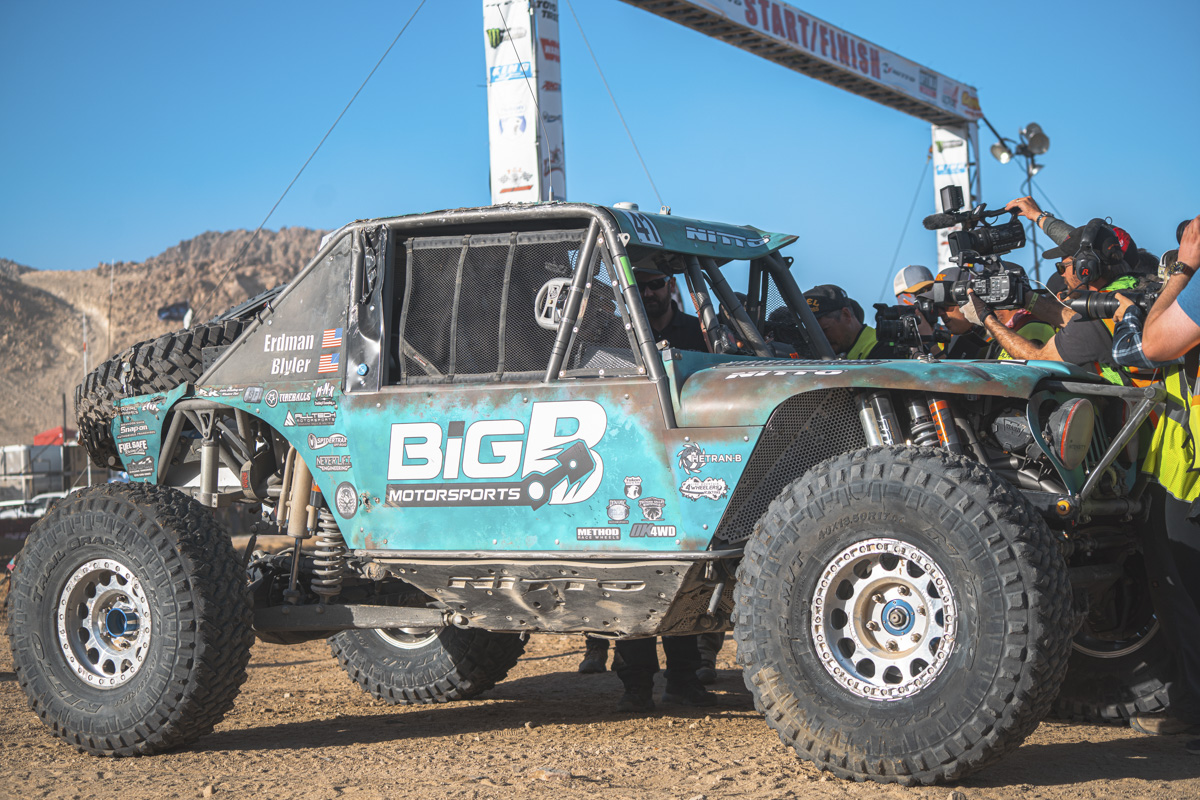 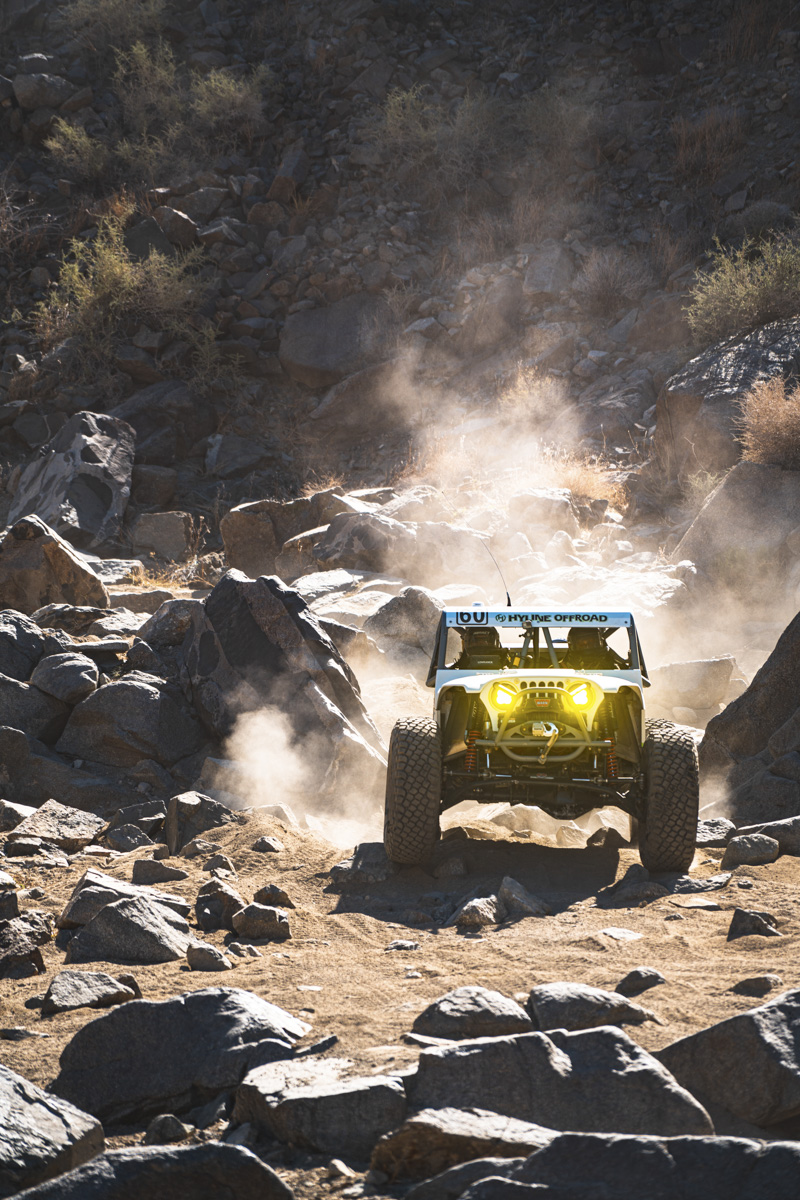 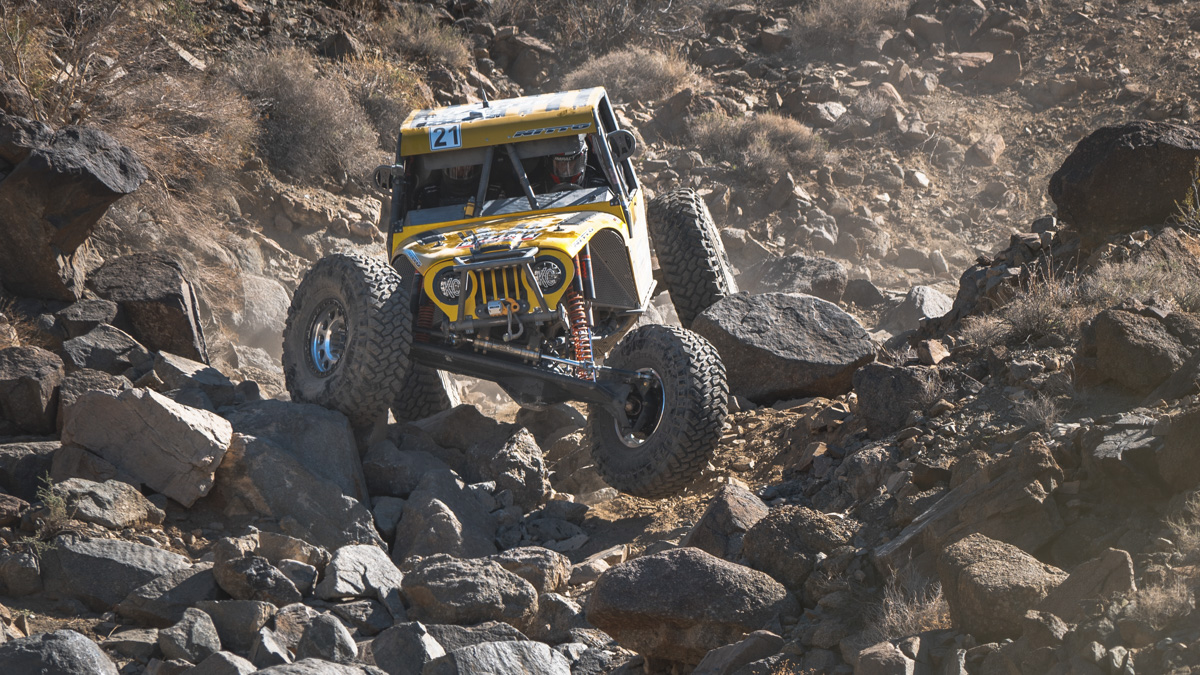 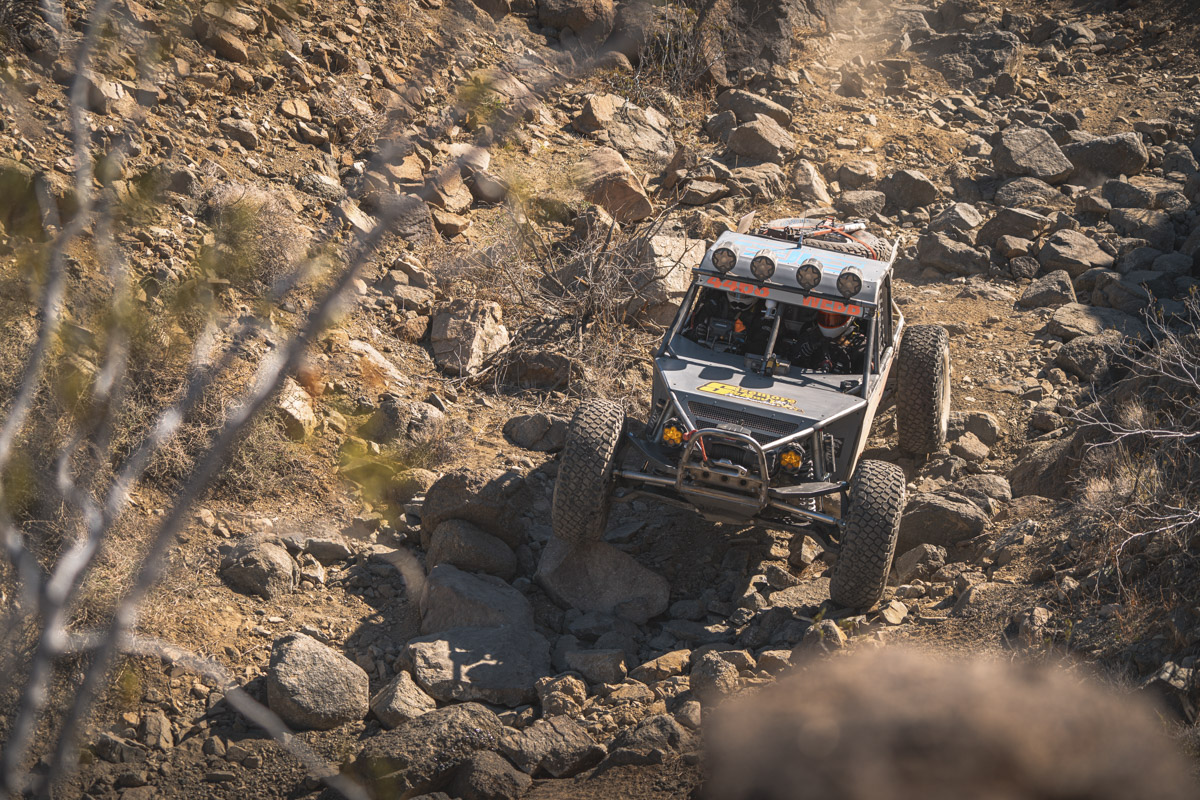 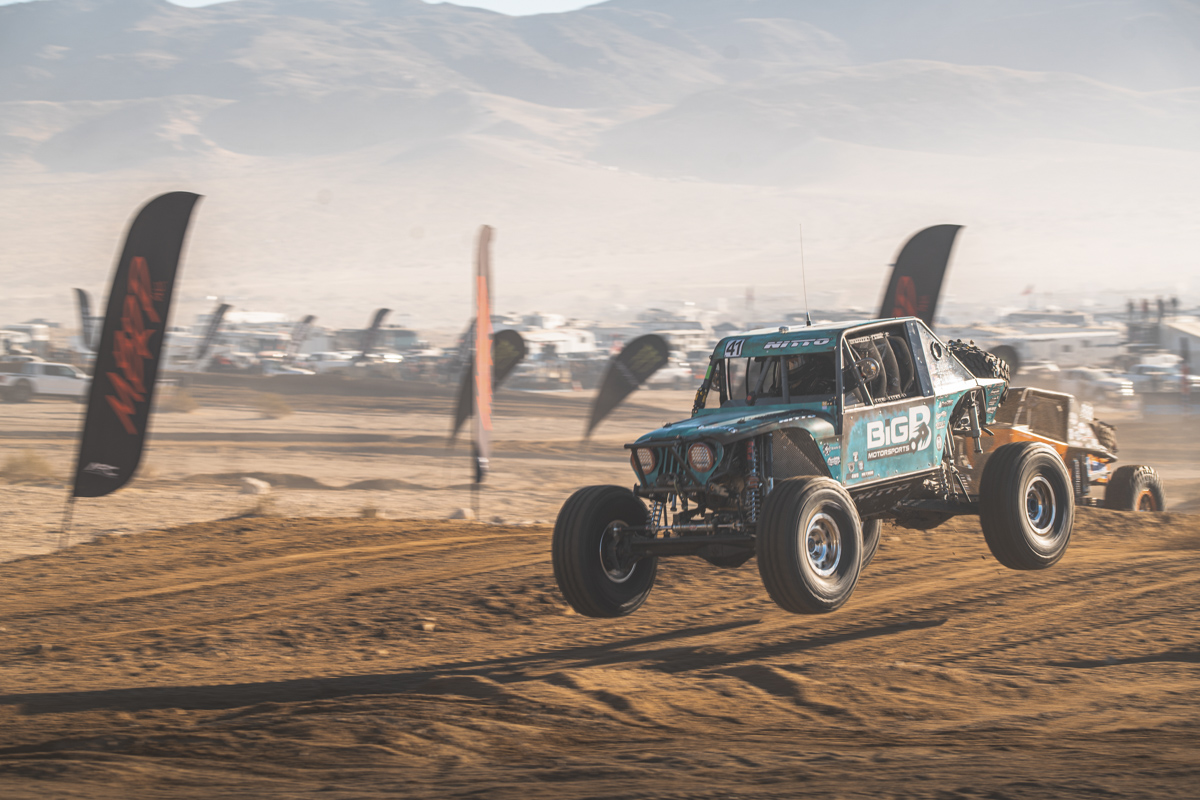 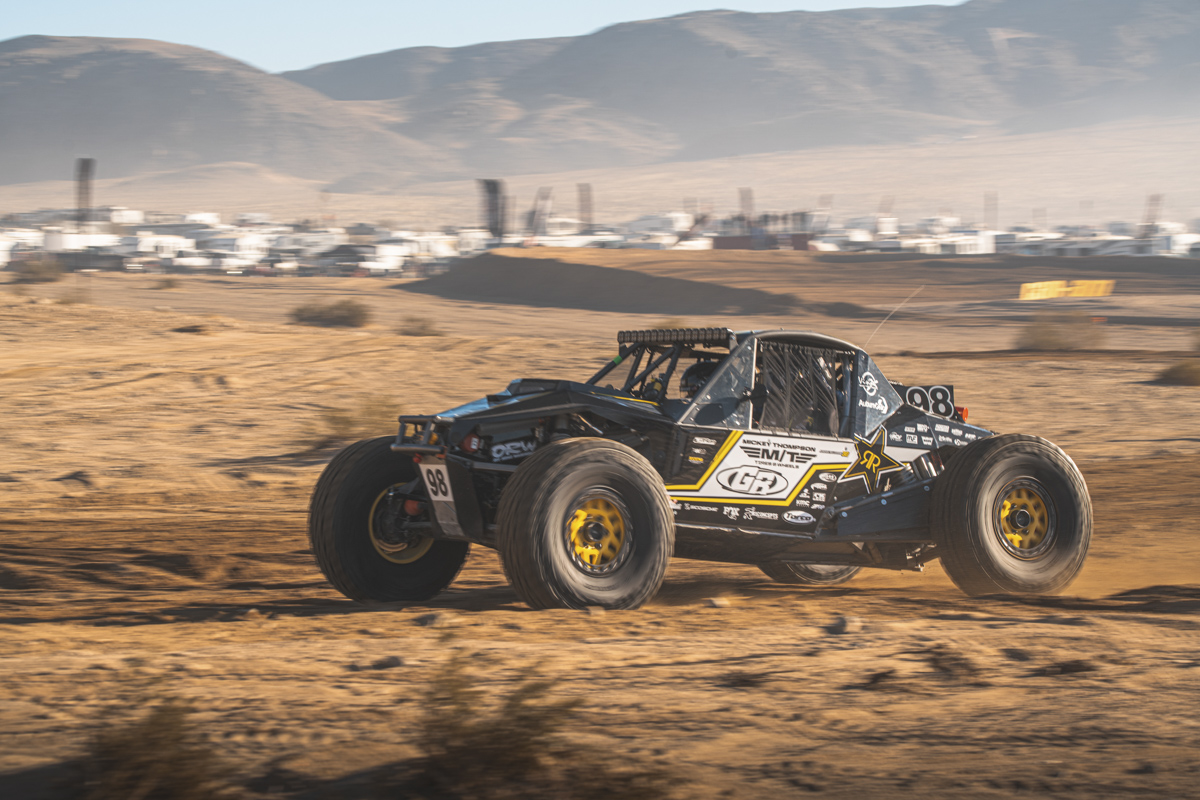 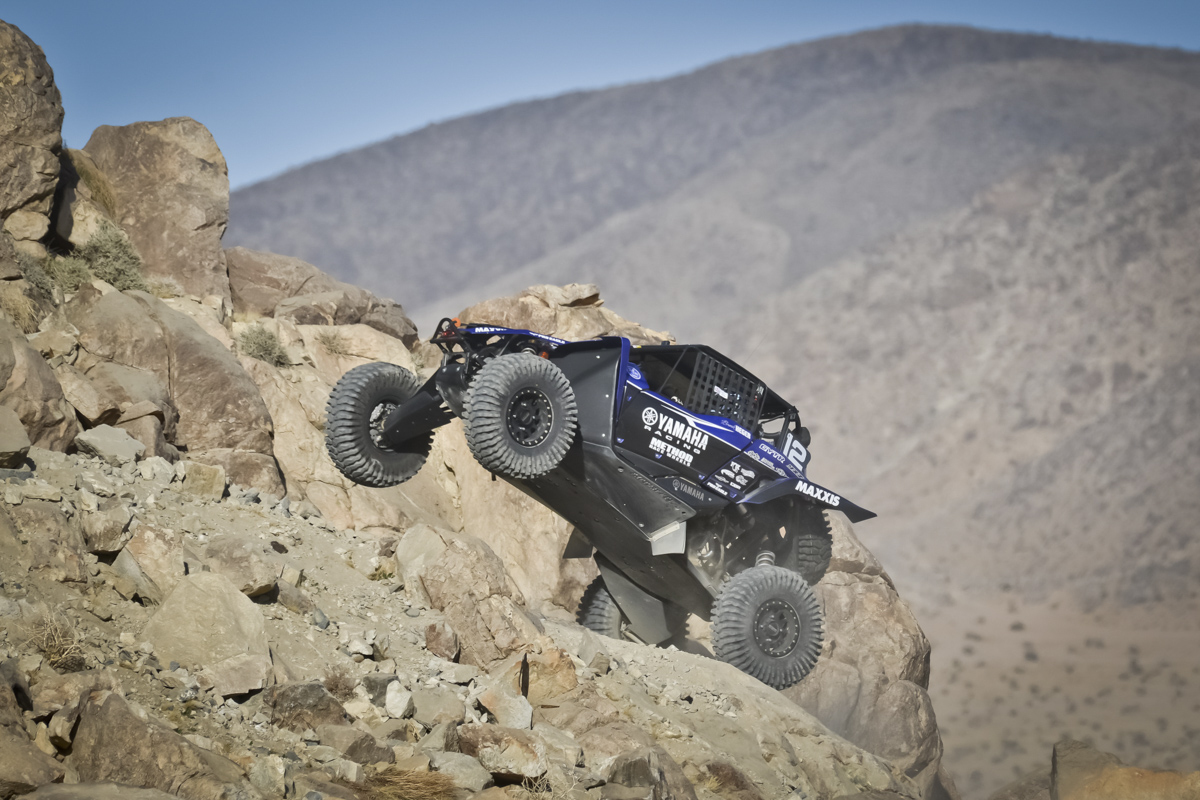 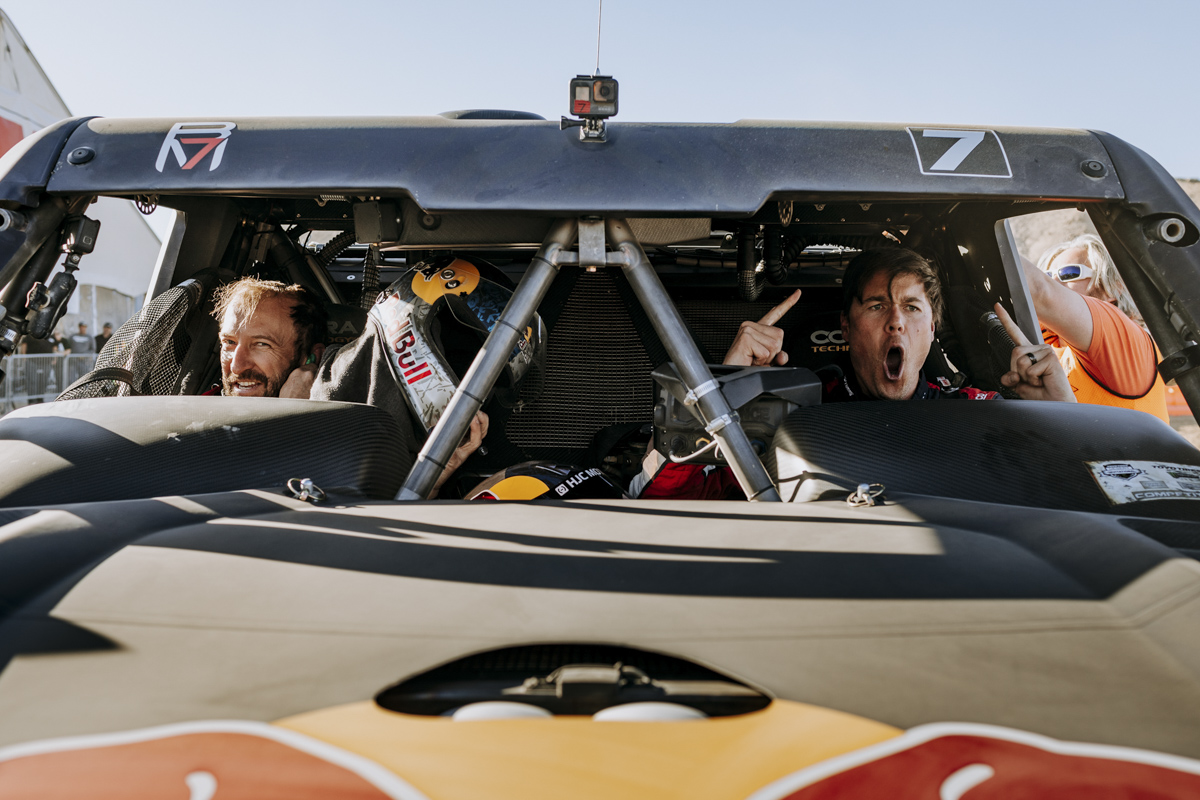 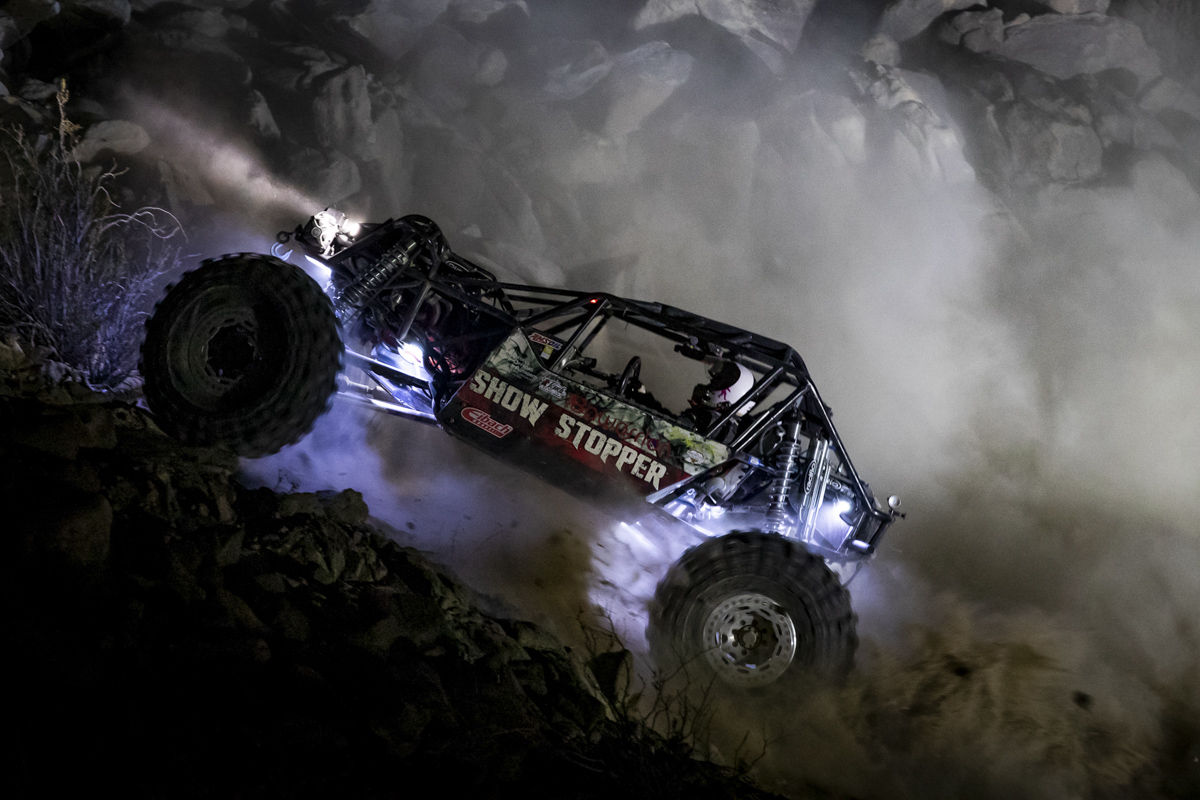 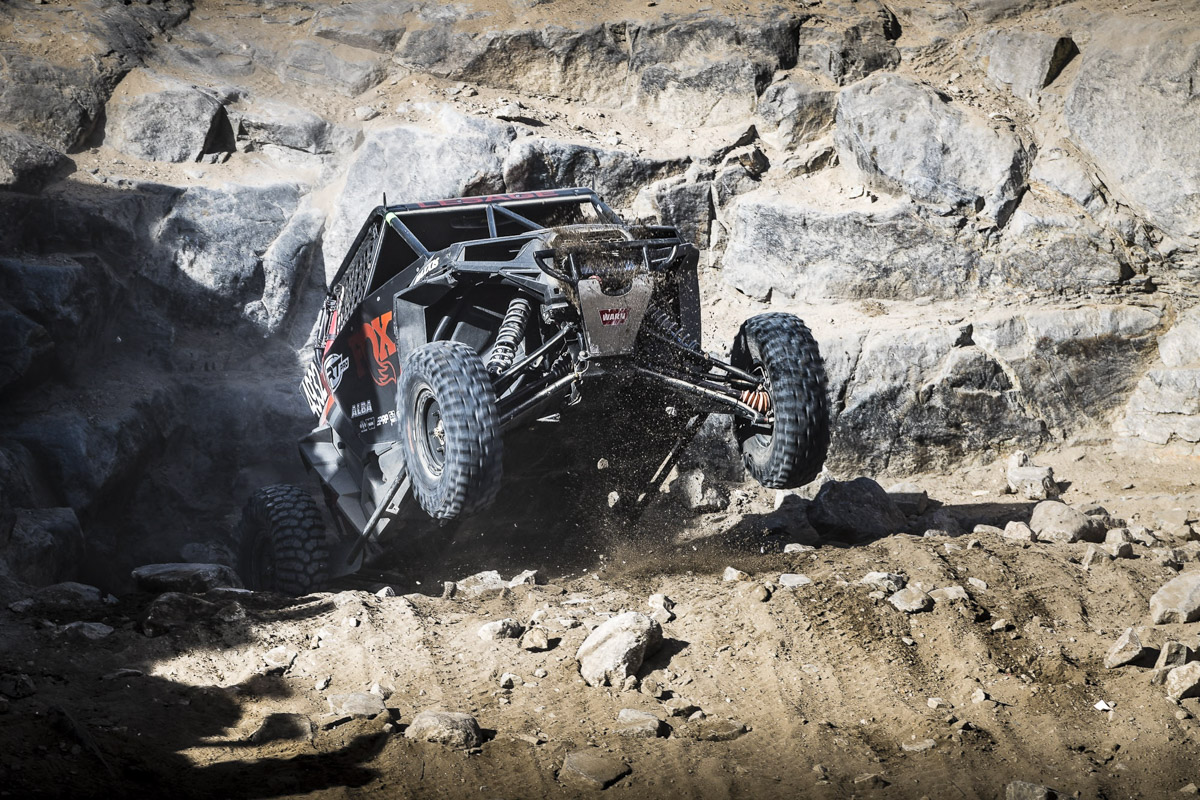 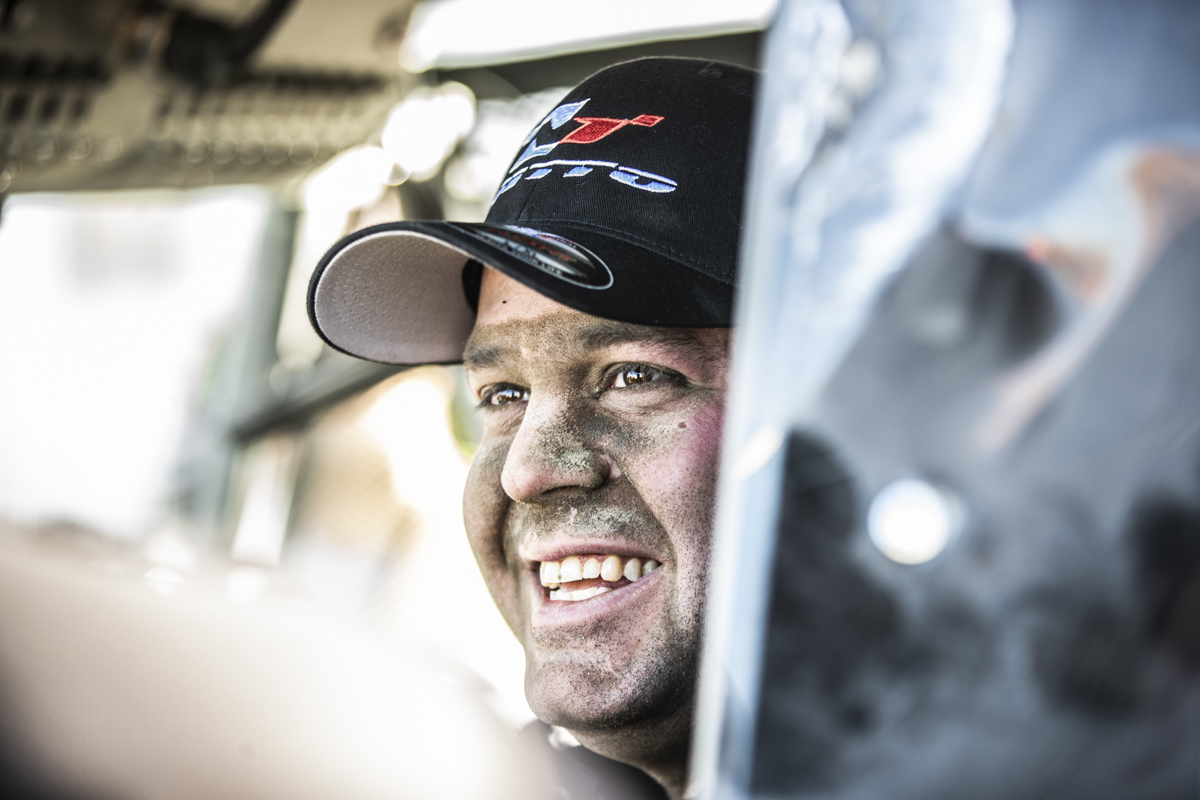 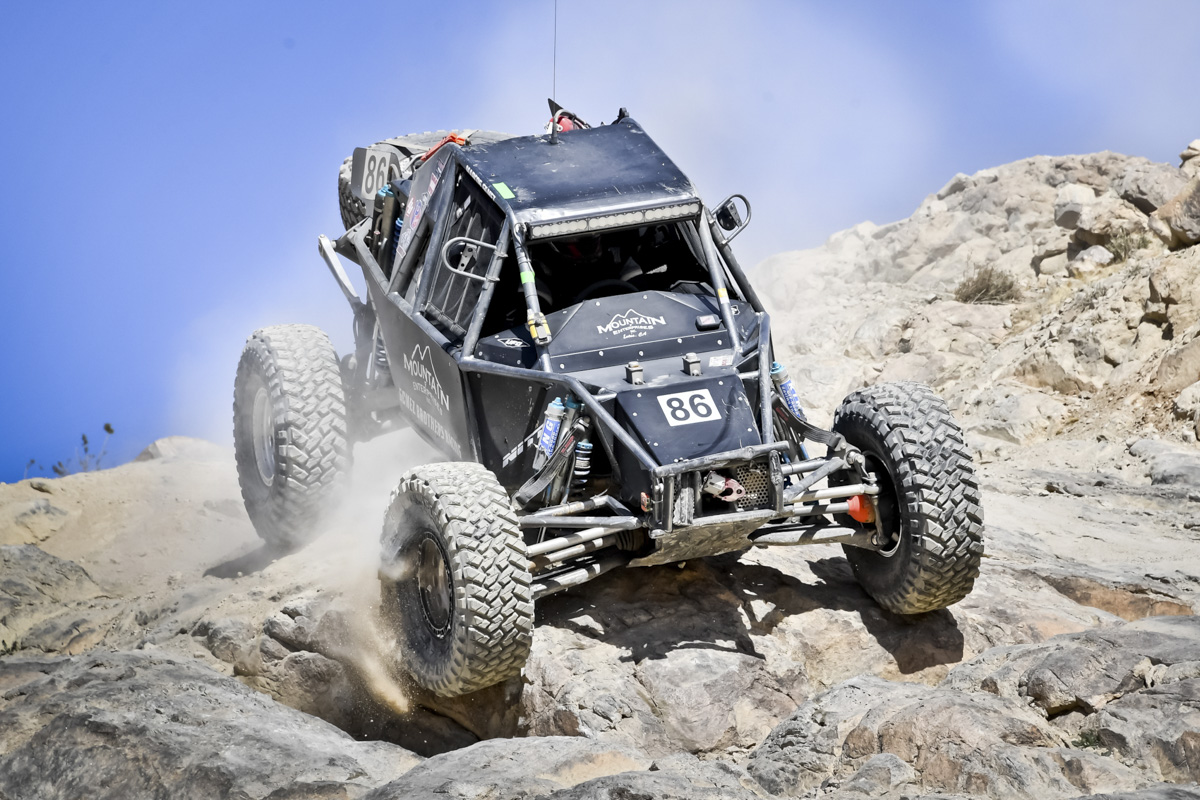 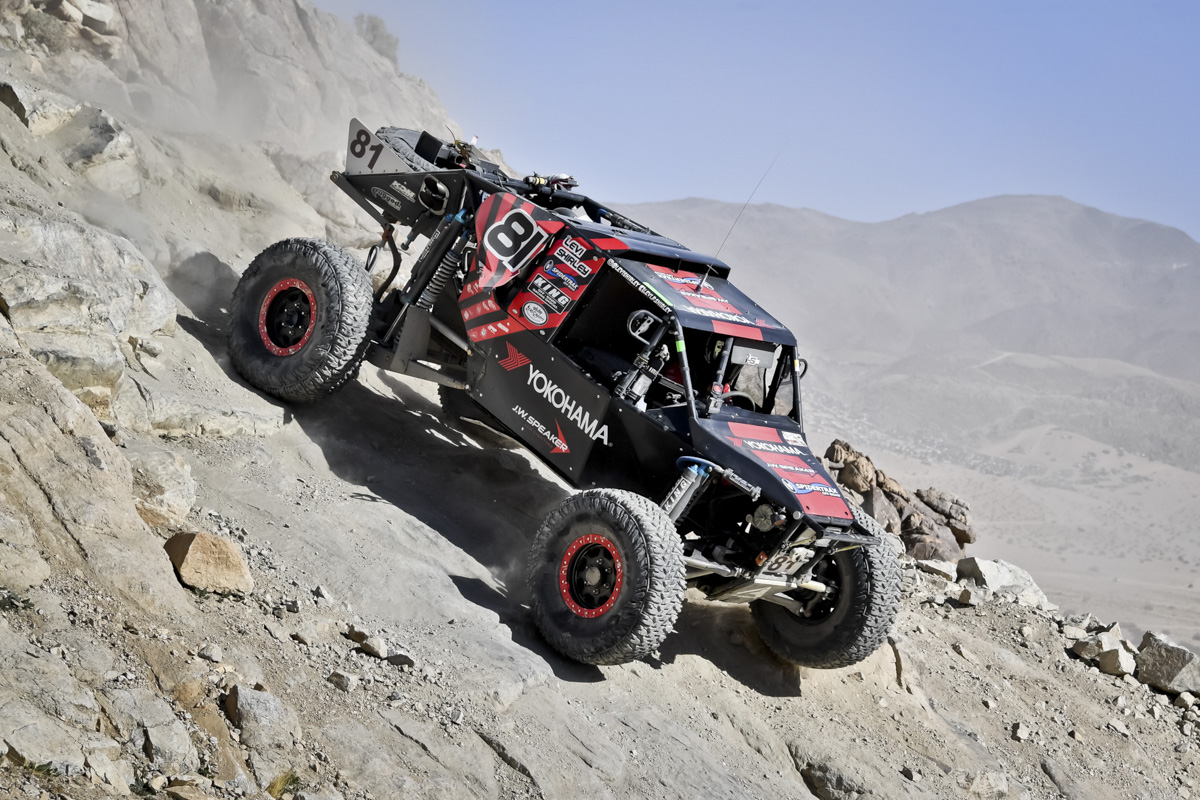 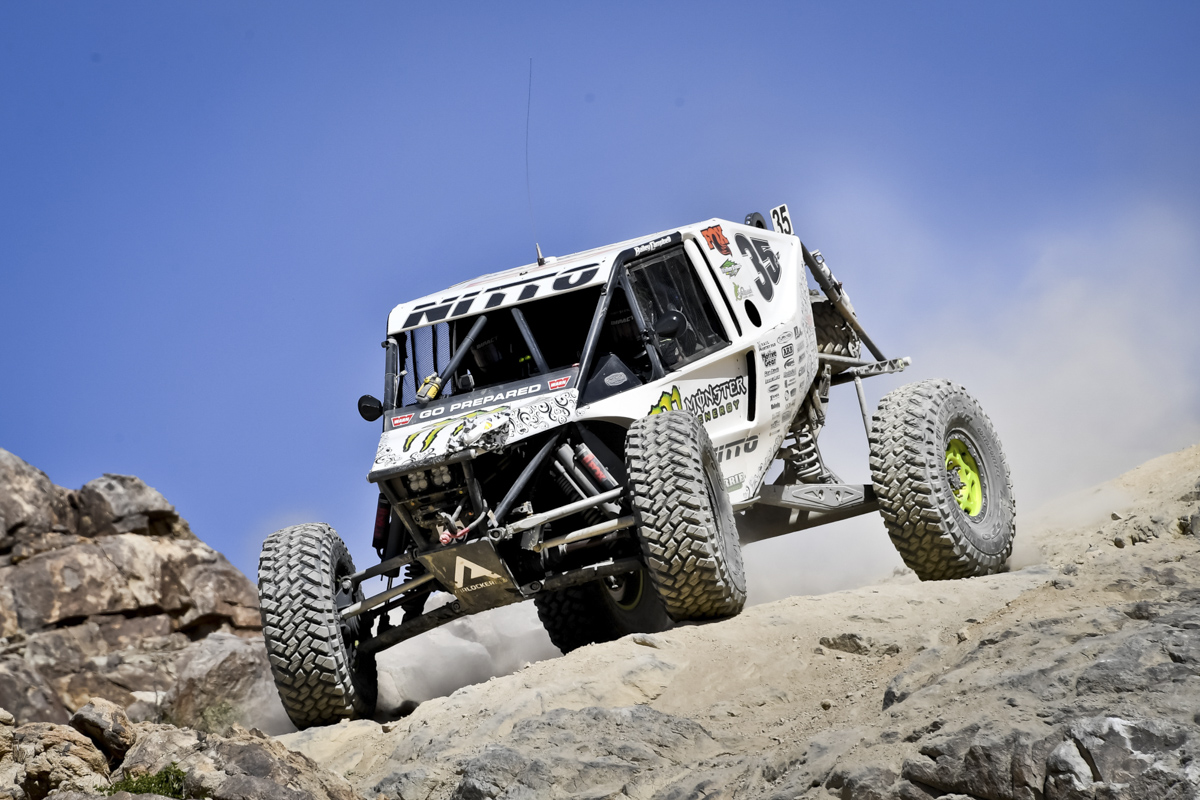 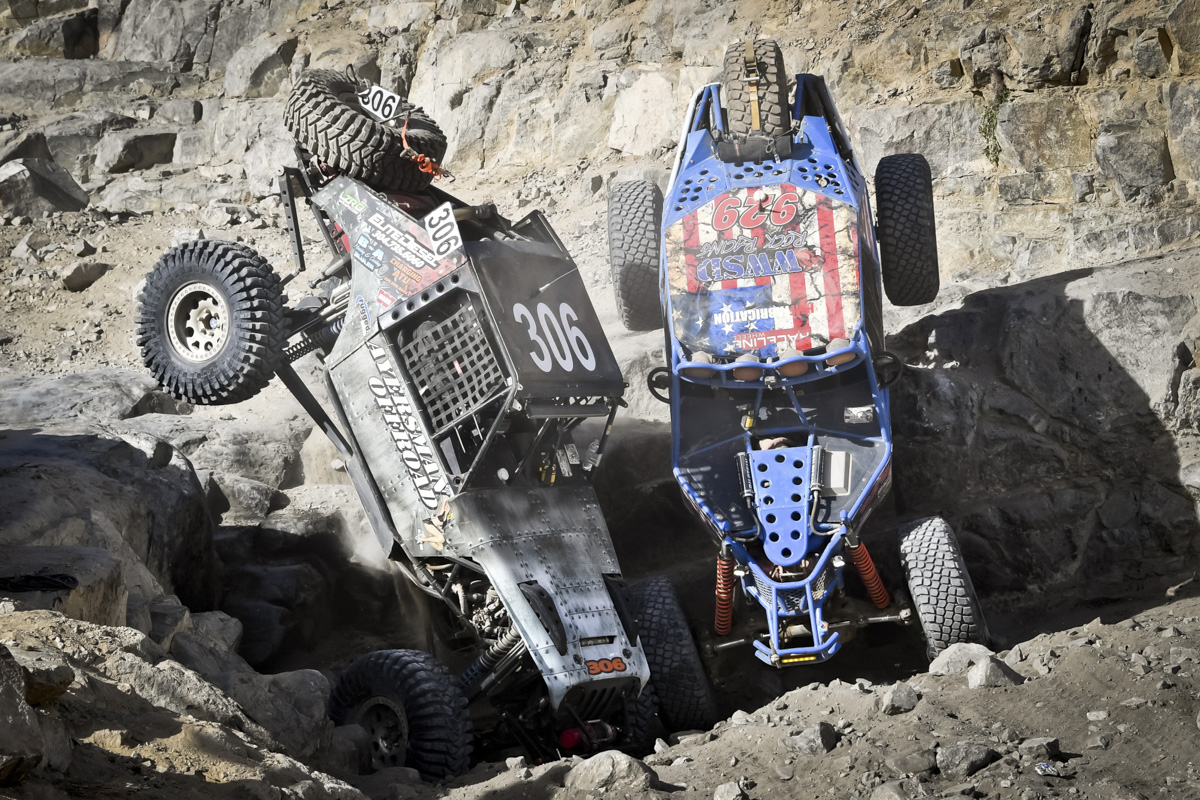 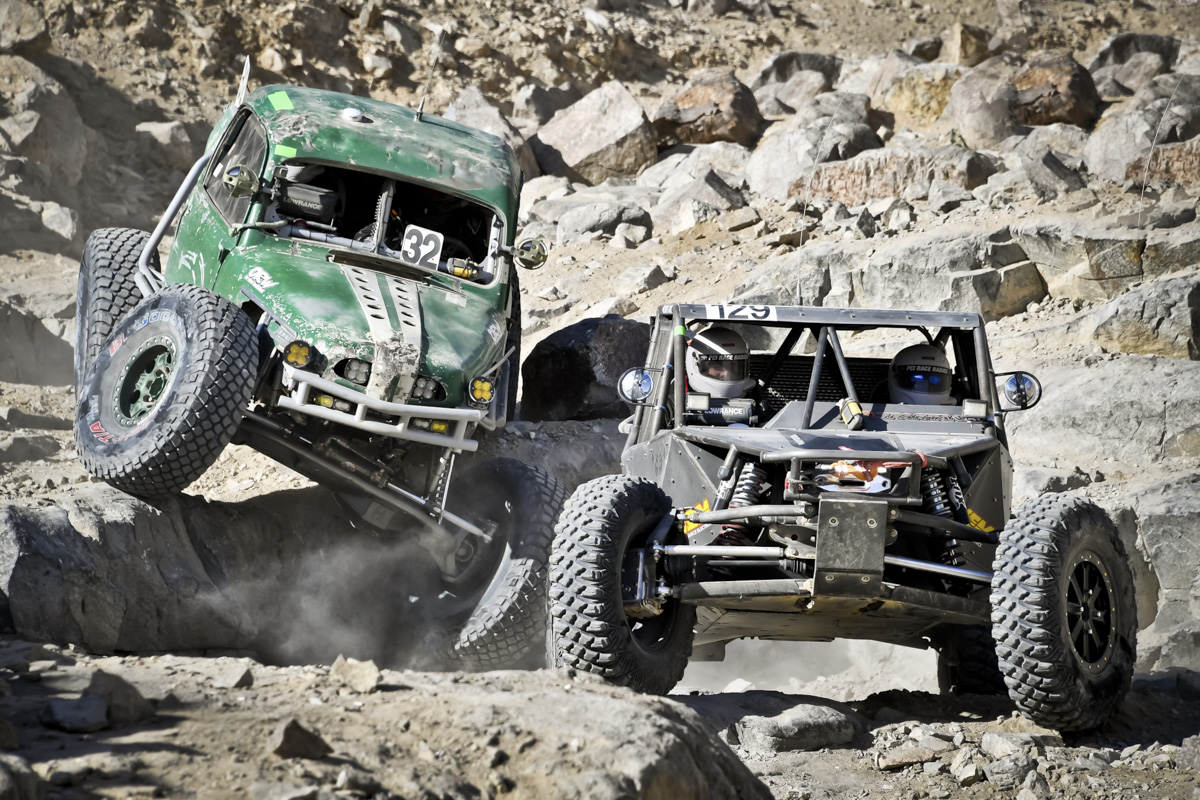 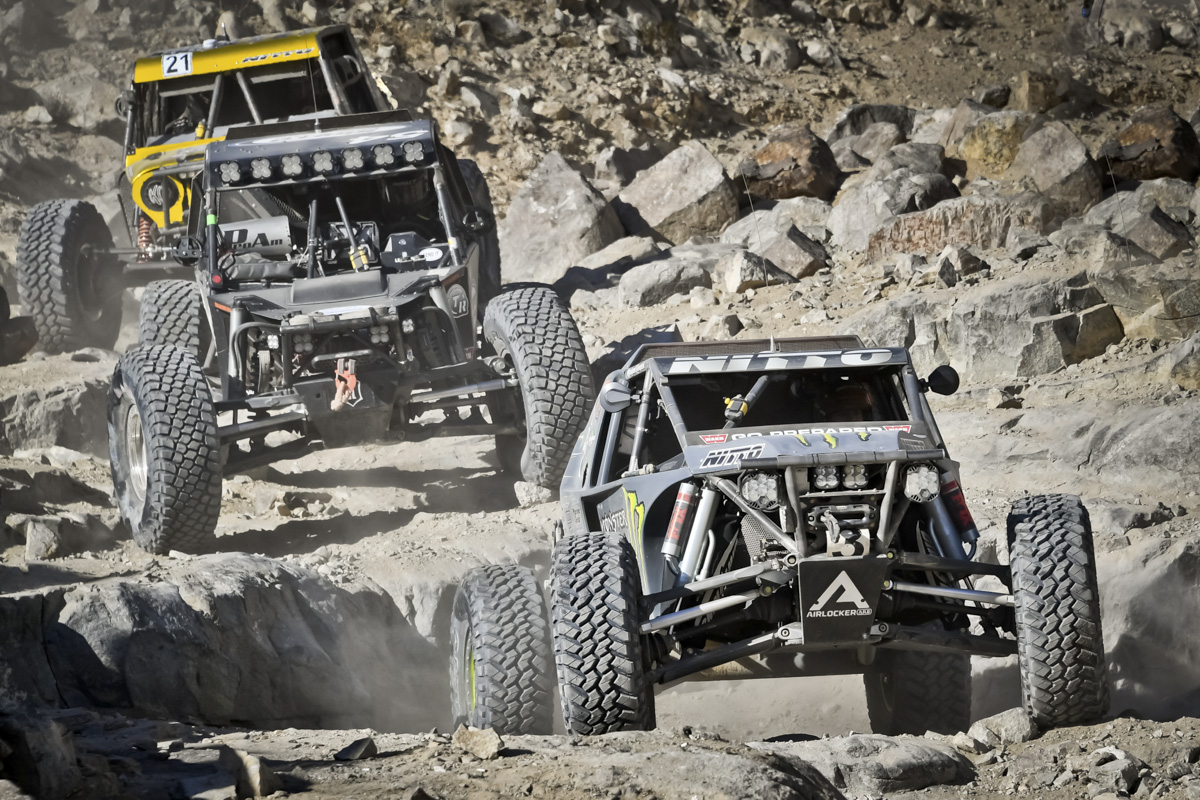 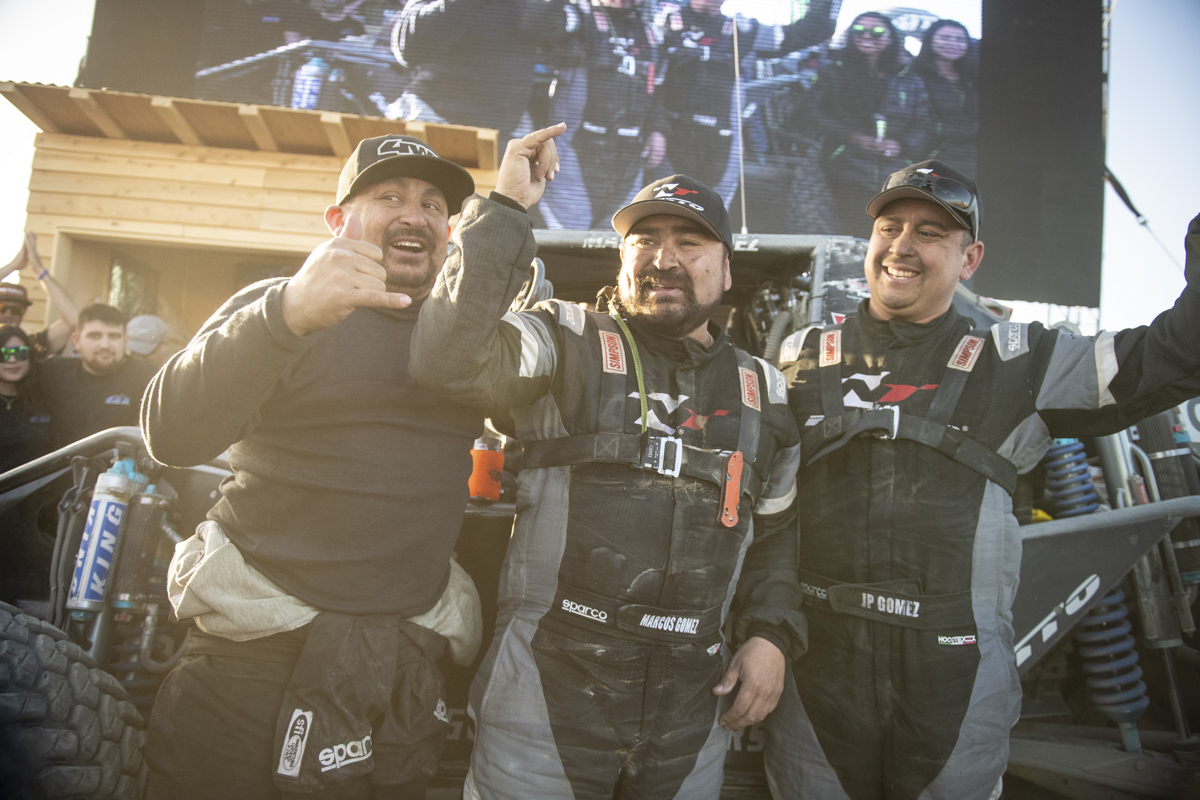