Story and Photos by Robb Pritchard

Editor’s Note:  It’s important to us to recognize that 4wheel drive goes on all over the world, that’s why we regularly feature writing and photography by Robb Pritchard of the UK. We try hard to translate it into American English, but some things just don’t have a great translation. Robb travels to some fantastic adventures to show us what is happening in other parts of the world.

Called off last year due to the whole region being mostly underwater, the first week of May saw the venerable Croatia Trophy back for its 19th edition. In a new location with all new tracks it wasn’t the biggest entry list ever, but the quality of the crews more than made up for the lack of numbers. For this grandfather of long-distance hardcore 4×4 events teams came from as far away as Estonia, Portugal, Russia, the UK and of course Holland. Two intrepid teens even shipped their Nissans half way around the world from Australia!

Along with Jim Marsden’s Ultra4 Racing ‘Little Lady’ and the lightweight Baltic teams the star of the opening parade in the sunny little village of Petrina was Johan Eibensteiner’s new creation. Powered by a 7.2 V8 Chrysler Hemi and weighing only 1300kg, on bypass air shocks with a PTO winch. It was so new that he’d only tested it for two hours previously. In his old car he won the Wild Boar and Transylvanian Trophy but had never taken the honors at the Croatia Trophy, so was hoping to set that right. And by winning the Prologue he showed that even straight out of the workshop the car is fast.

Early summer in the rolling hills of southern Croatia the event has often been at the mercy of the elements and although the prologue took place in glorious sunshine the same weather system that caused the May snow through Europe brought unending rain and temperatures hovering around 6 degrees. Grim conditions indeed for long wet stages through the forests.

Marsden’s 650hp Ultra4 racer on Spidertrax axles was a little wide for some of the gaps through the trees but Eibensteiner’s new little buggy is tiny and most of the first stage was a fight between these two multiple off-roading champions… until Eibensteiner’s steering knuckle broke. The time lost crawling out of the stage in 3-wheel drive turned the rest of the week into an extended test session.

Marsden wasn’t let free though and Estonian Hardo Mere, another old hand and multiple international 4×4 event winner, took the lead in his lightweight and nimble proto. Built to take on the Russian bogs of the Ladoga Trophy, the Croatian mud, as claggy as it is, wasn’t the hardest challenge he’s ever tackled. A great drive by Estonian Vallo Sassi in his stunning Mitsubishi Evo 10 powered, Volvo Laplander axled proto with a PTR winch from an armoured truck meant that it was a very close event. As Marsden explains. “A few years ago there was 60 cars in the class with maybe four or five able to win, and although it’s the smallest size class I ever saw there are 10 or 12 cars of the absolute highest level so the standard is really incredible.”

The camaraderie of the Croatia Trophy is also a part of its legend and Marsden was also an example of this when he swapped co-drivers with rival Mere for a day. James Ayre got the better deal as Hardo’s car had windows and a heater.

Latvia’s Edvins Vansovics had a new tubular frame, Laplander axled, BMW E46 2.6 TD powered car that he wanted to test for the Ladoga Trophy. Wanting to go home with it in one piece he took it easy but still put in competitive times to hold 5th, which became 4th when Mere had a serious accident. Caught between his car and a tree while trying to fix his central tire inflation system he was lucky to escape with just a broken collarbone and a cracked rib. It did however mean instant retirement.

In a surprise 3rd place, a surprise even to them, was Portuguese Helder Da Rocha in his UMM-looking car. Built for the dry dust and rocks of technical and extreme Iberian events his car was suited to the forests despite Da Rocha never having competed in the medium of mud before. With softer suspension, longer ration diffs and a remapped turbo for more speed, if he hadn’t lost 50 minutes with a flat tire and an overheating issue on the first day he would have been fighting Marsden for the lead.

The Adventure class, sponsored by Tatanka, for slightly lower-spec vehicles has been fiercely contested for many years, generally being the preserve of Russians in insanely capable Land Rover 90s… until the Euro4x4Parts team built their orange Defender. On a D&G Tuning tubular chassis with the TD5Inside tuned engine positioned 25 cm back for better balance and on modified Nissan Patrol axles it’s a serious truck.

The capability of the cars have improved significantly over the last few years and the stages were a bit easier than some of the teams were expecting. With less winching than in previous years the fast pace meant that it was an incredibly tight race with just minutes separating the leaders all week. The plucky Estonians in their Suzuki Samurai are used to flat bogs and so had never competed in mountains before. Frank Daurelle in the Euro4x4Parts Defender and Holland’s own Sjoerd Wijnia in his basic-looking but very capable Suzuki all had stints at the top of the leaderboard. On Day 6 the Estonians managed to roll three times in the space of a couple of miles, although somehow they only lost 10 minutes. Then on Day 7 Daurelle had a problem with the hydraulic steering. Thinking it was repaired he pressed on for the last 300 yards to the finish… but when he needed to turn again found that actually it wasn’t fixed. It wasn’t a particularly hard crash down a bank into the trees and they had it started again before co-driver Françoise Hollander had done up her seatbelts. Heavily bruised they carried on, but it left Wijnia with a 3 minute lead.

The heart of Wijnia’s Suzuki is Croatian. When he blew his engine a few years ago he found a replacement 1.9 Tdi from a VW Golf in Zagreb and has kept it ever since. And it did him well as he and Eric Plomp kept their nerve as the Estonians pressed for a last chance of victory, to take a brilliant win, adding another big trophy to his 2017 Welsh Xtrem triumph.

As well as catering for the most capable and extreme 4x4s in the world a new class was instigated in 2019 for more standard 4x4s similar to the ones used 20 years ago when the event started. In this Legends class Geert Martens’s Land Rover 130 was an impressive sight. Not really considered a competition car the class was billed as challenging but non-damaging, even for such a big and unwieldy vehicle. Usually his expedition truck, which he has taken on trips as far as Kyrgyzstan and Kazakhstan, the 100 inch Challenge truck he’s building didn’t get finished on time. Instead of cancelling he decided to have some fun in the 130 instead. “There was lots of winching and some places were quite tight for the 130, so we often had to winch just to get around some trees.” Despite being pretty easy tracks he and co-driver Robbert Jansen did make it a little harder for themselves by getting lost on the night stage when they had to spend a lot of time winching to get back down the muddy hill safely again.

The sun finally came out for the penultimate day to push the temperature into double digits for the first time in a while but the days of constant rain had caused a large landslide that cut off the planned stage. This prompted event organiser Igor Bozikovic to come up with a great idea; to get each team to make a short but testing stage up a steep back and through a swollen river. Some extreme winching, with advance knowledge of winching trigonometry, helped crews scrabble up impossible looking gradients, getting their cars up places that co-drivers could hardly manage on foot.  Eibensteiner with his incredibly fast PTO winch shot up sheer faces as fast as though he was driving on the flat. And from the world of technical trails like this Da Rocha did exceptionally well and demoted Sassi down the leaderboard to 3rd.

With just one final, and relatively short, stage left the positions looked set… until on the start line Marsden realised his alternator had died. A race back to camp to fit a spare and he took the start in the middle of the pack. He had roughly an hour to spare over Da Rocha but while he was winching through some seriously muddy sections the portal shod cars, with much higher axle clearance passed him. At a big winch section in the middle of a fast flowing river he pulled ahead but then stopped to help his friend Da Rocha who was stuck by an unseen log in the river that had broken his clutch. In tow the pair made it to the finish line to take a popular 1-2. Sassi brought his proto in in 3rd without a scratch on it.

Although Dave Cameron is a winner of the Outback Challenge the Aussies came just for some fun and to experience a racing environment completely new to them. The freezing and muddy forests were certainly the exact opposite of the Australian dust. With six weeks on a container ship the 600 bhp 6l supercharged Nissan V8 made some delightful noises in the woods and despite not being particularly competitive the crews had a great time and were a very welcome addition to both the forests and the campsite. 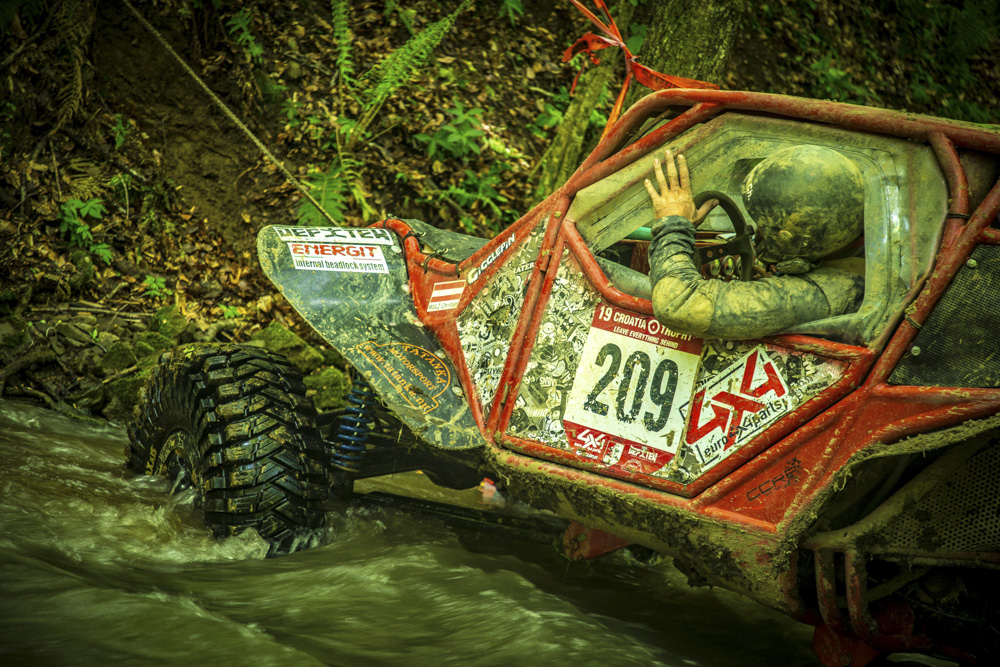 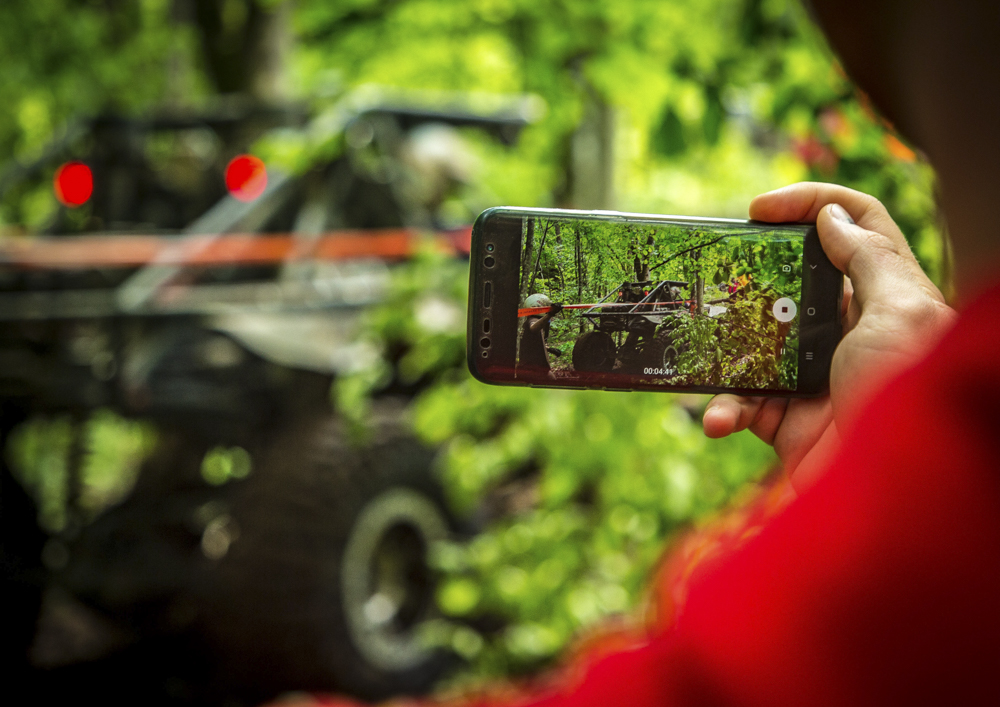 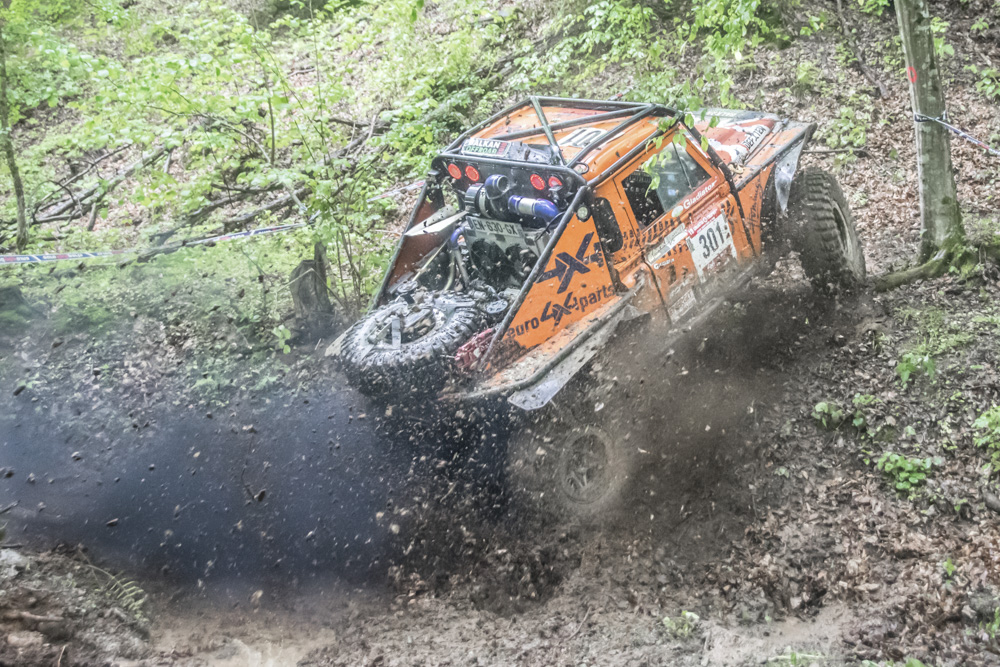 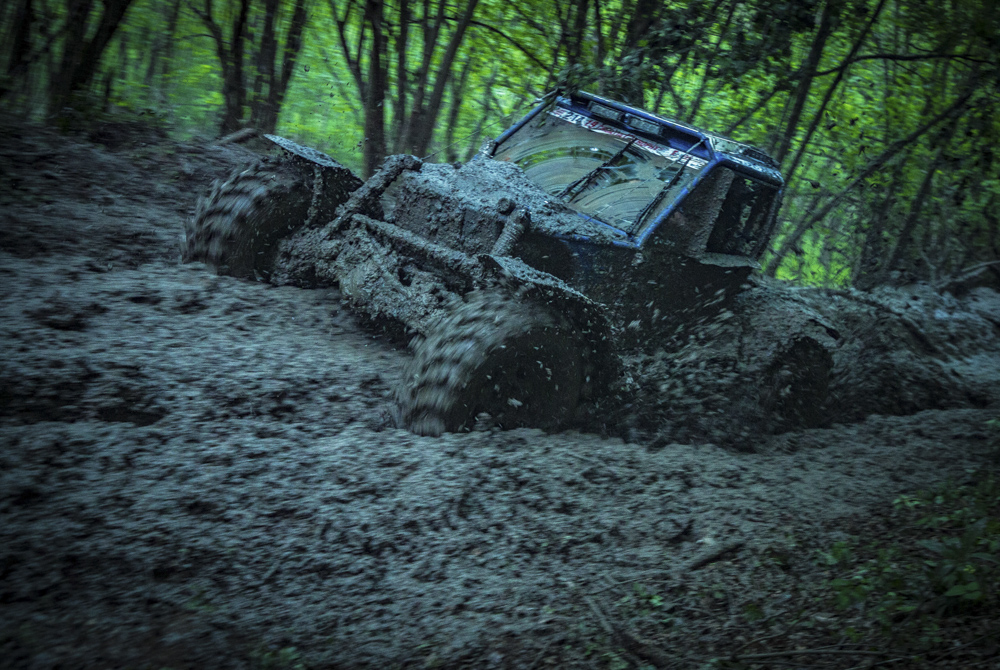 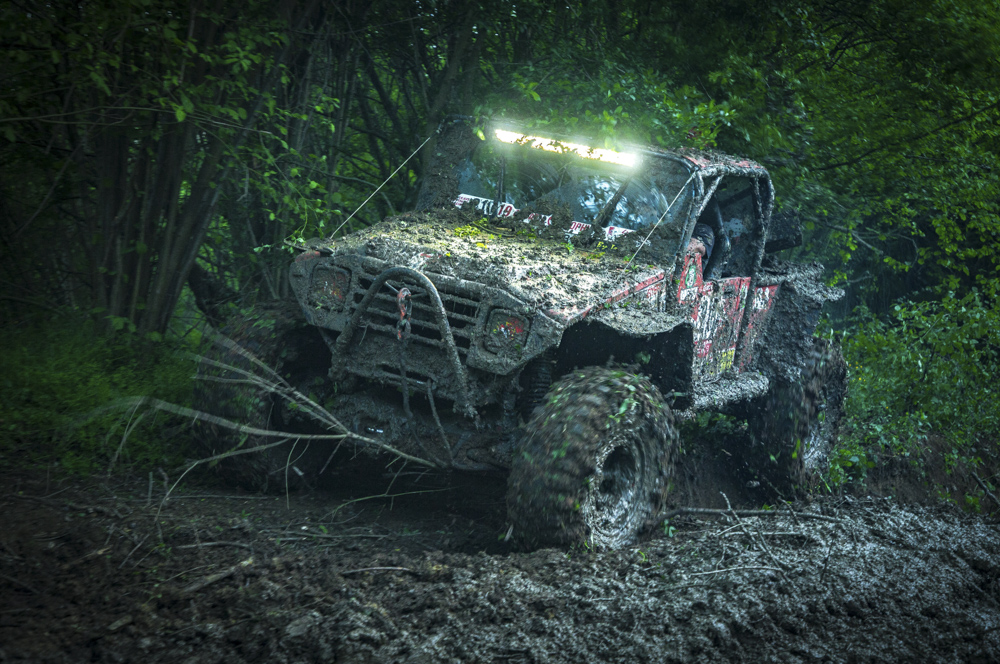 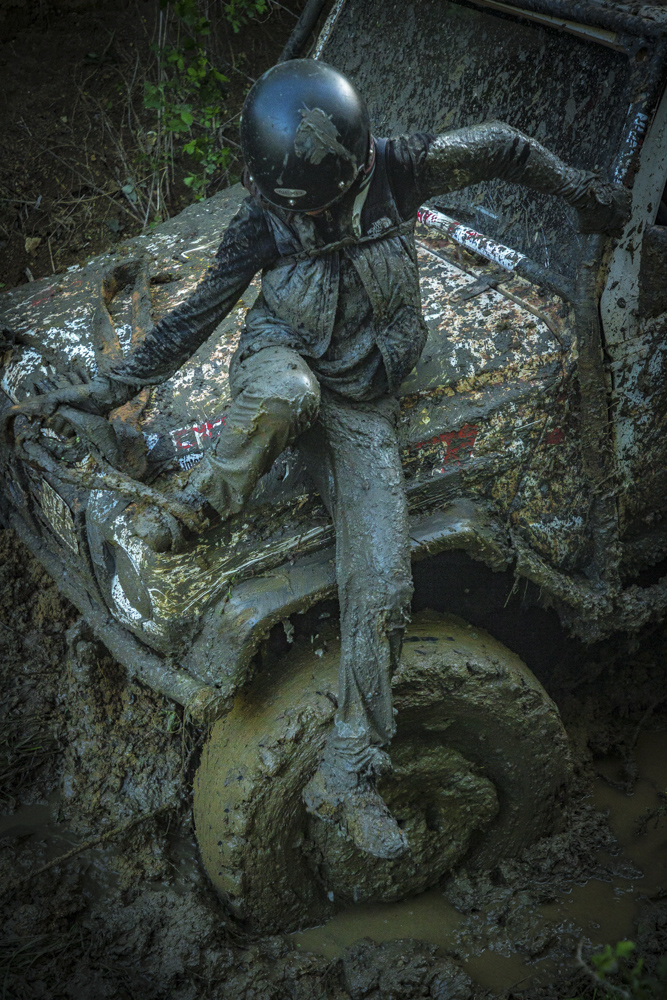 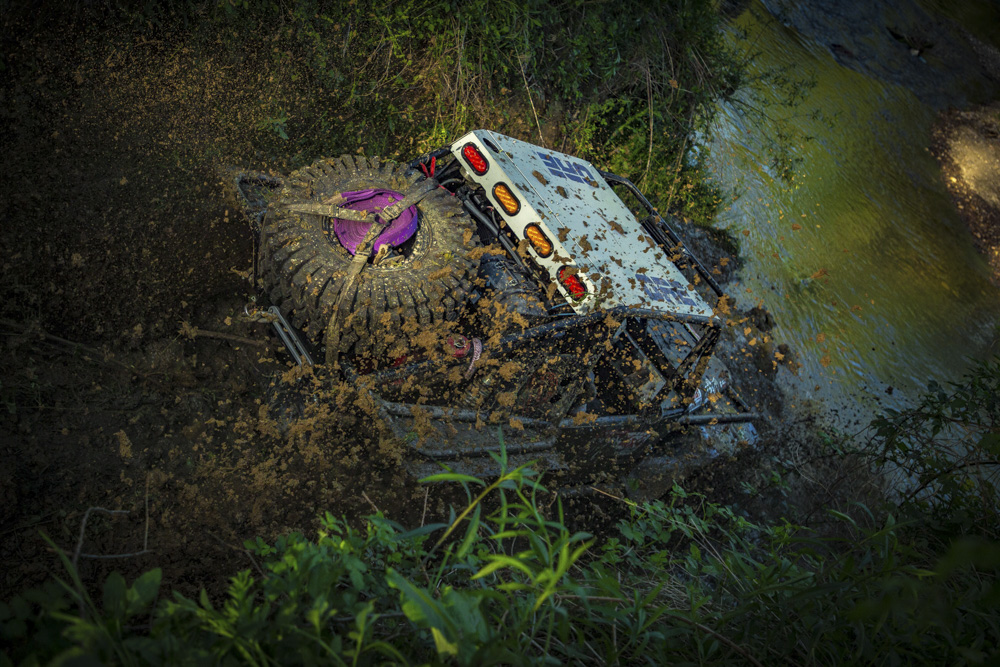 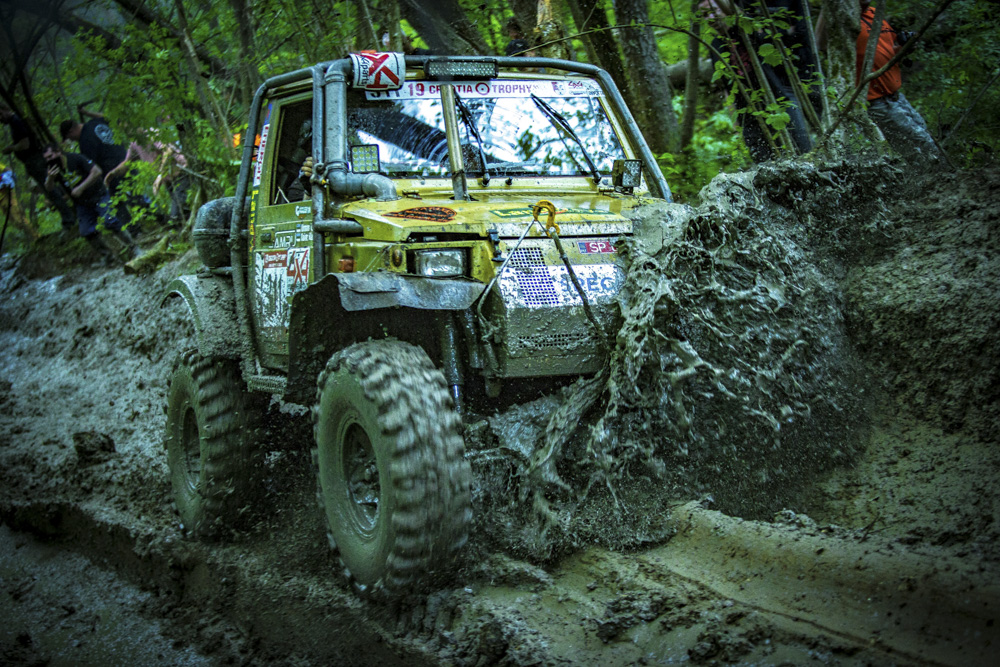 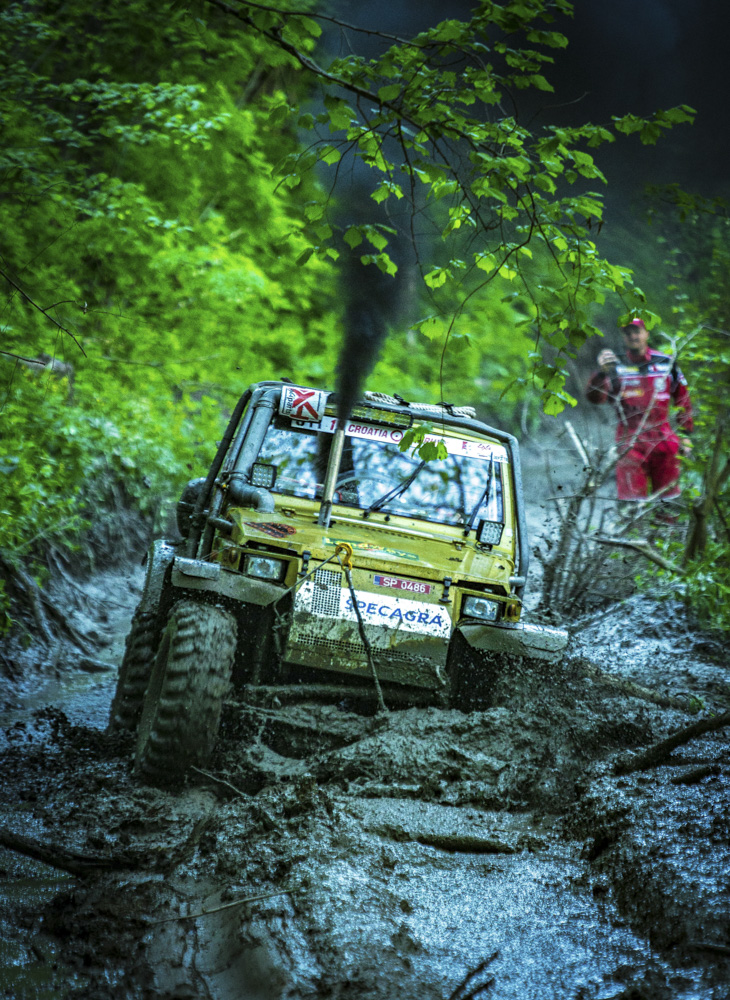 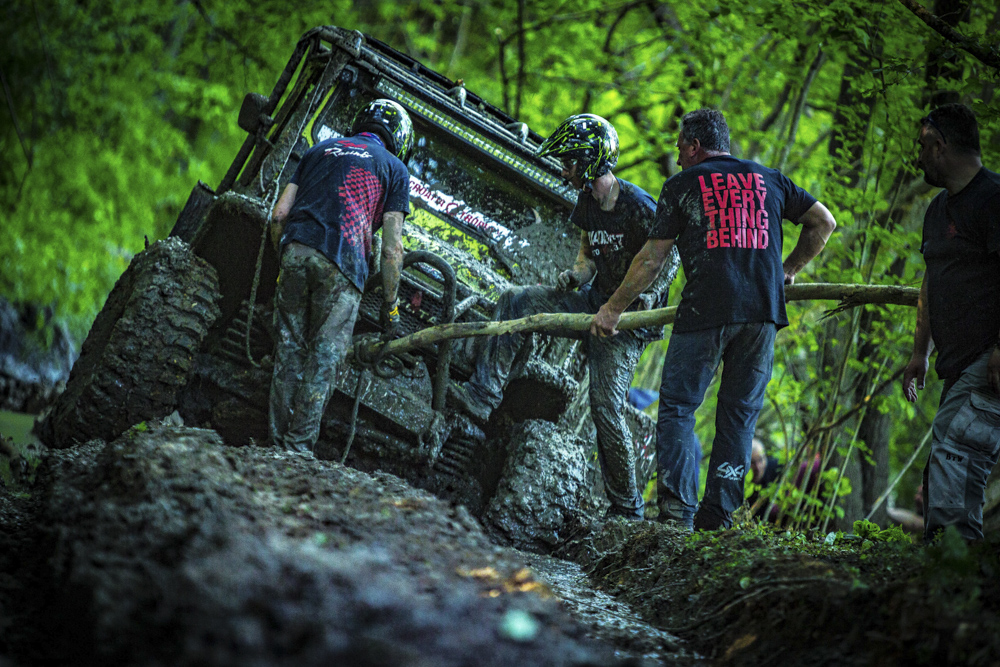 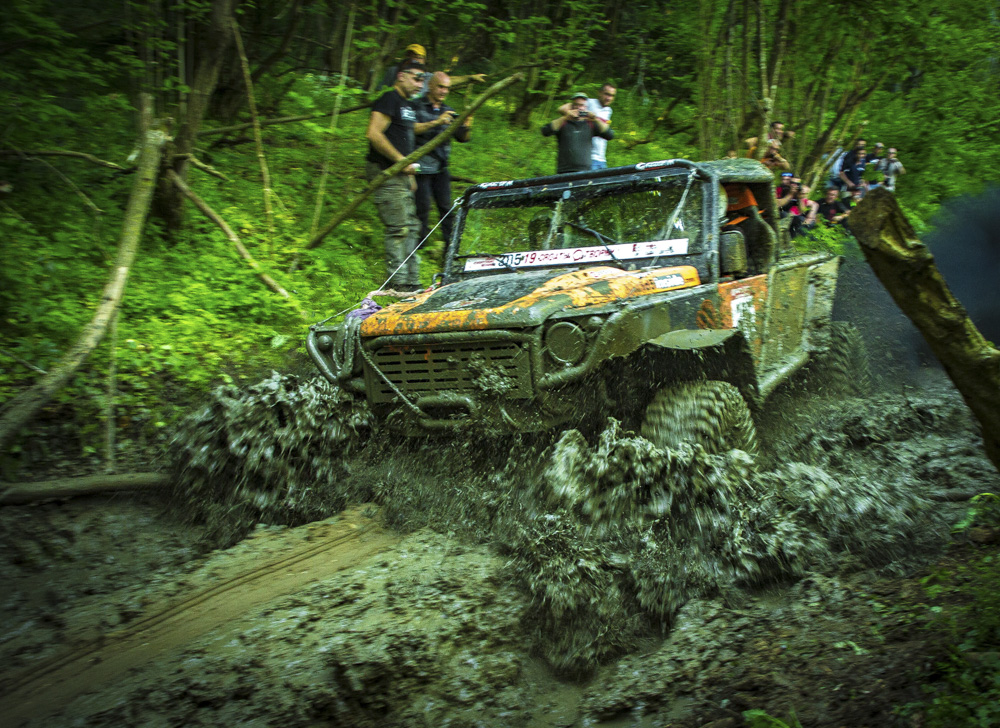 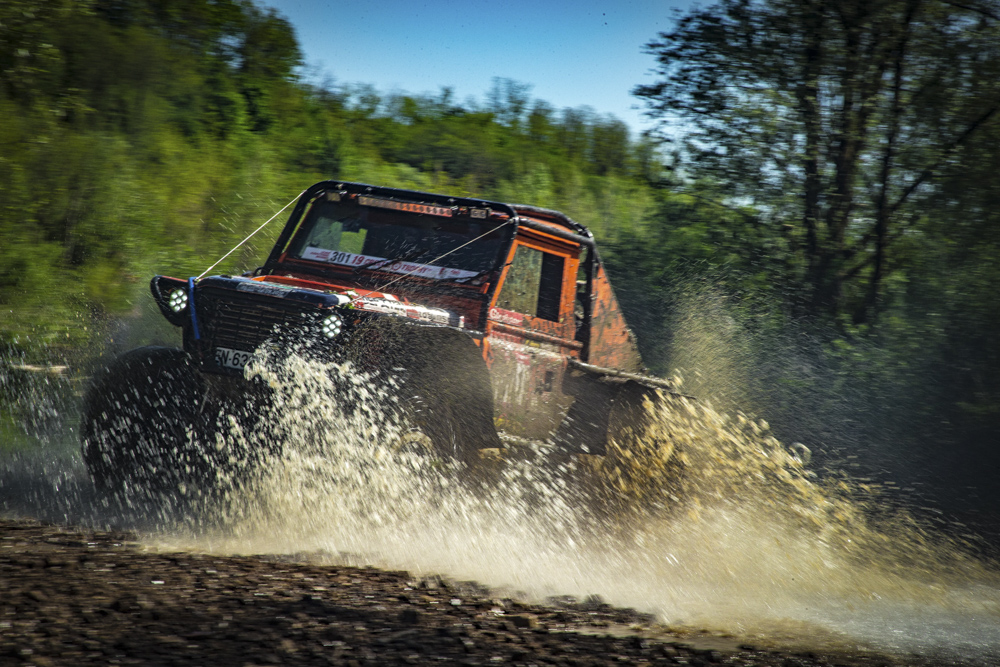 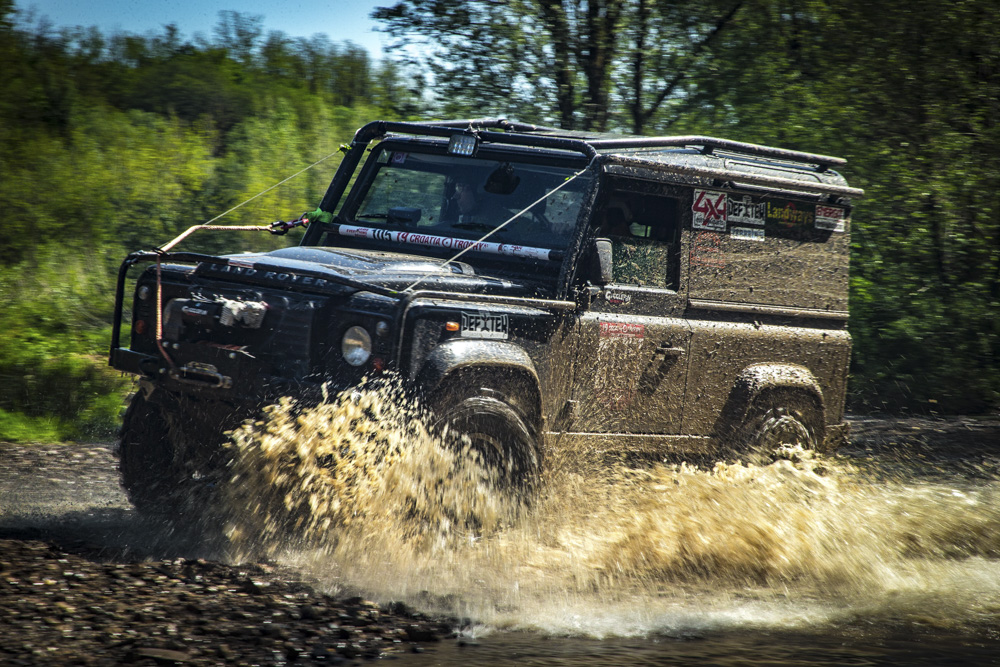 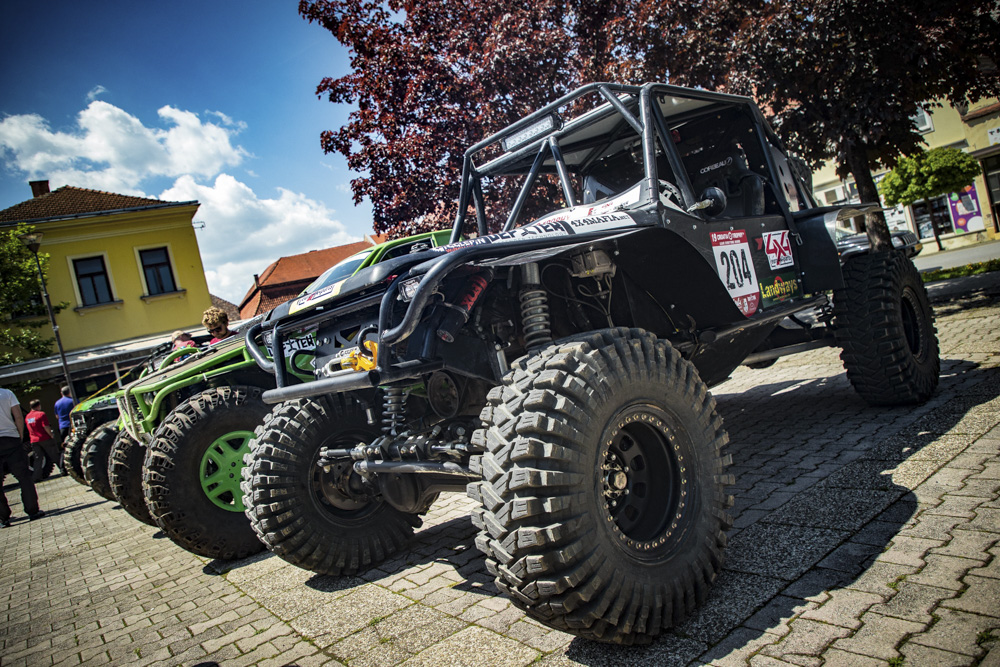 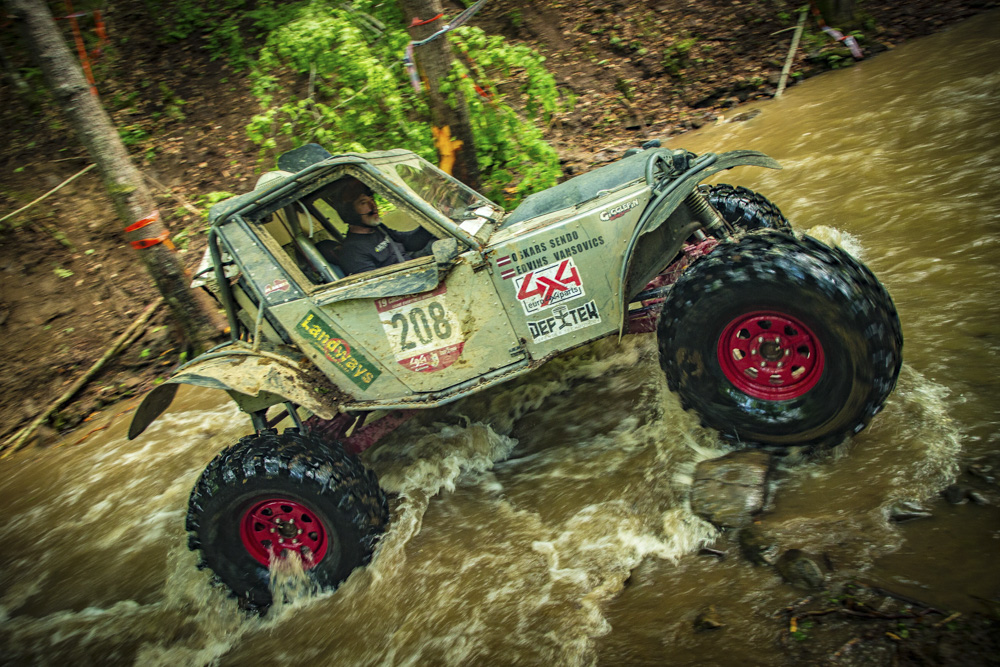 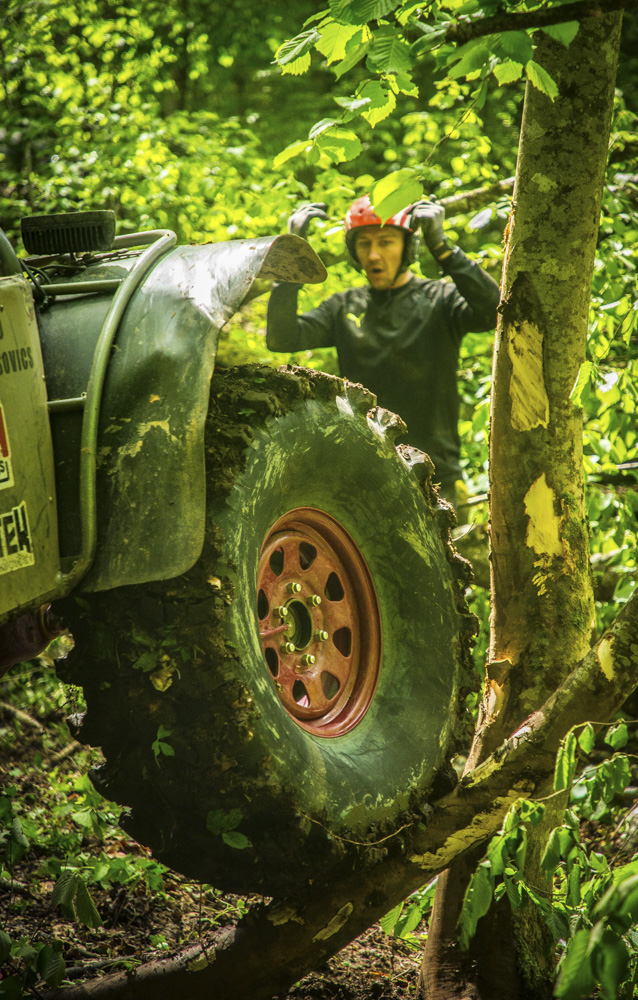 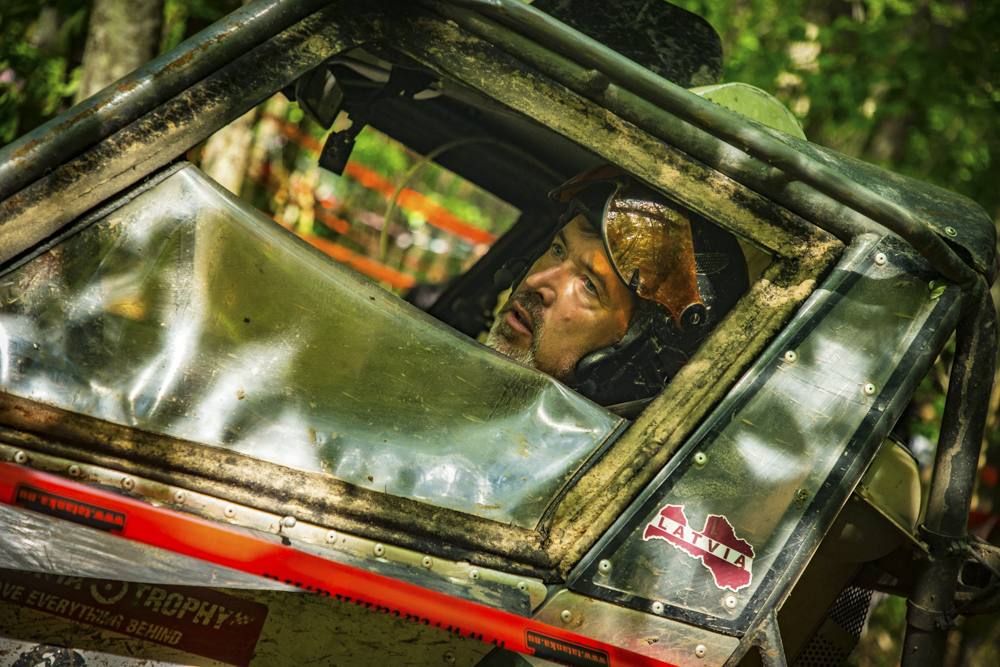 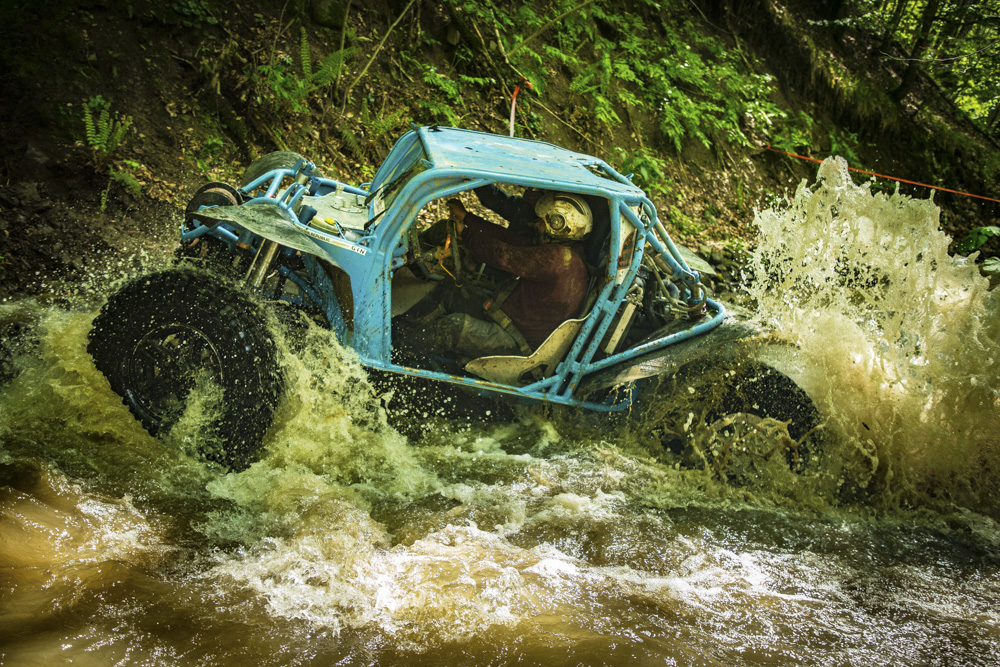 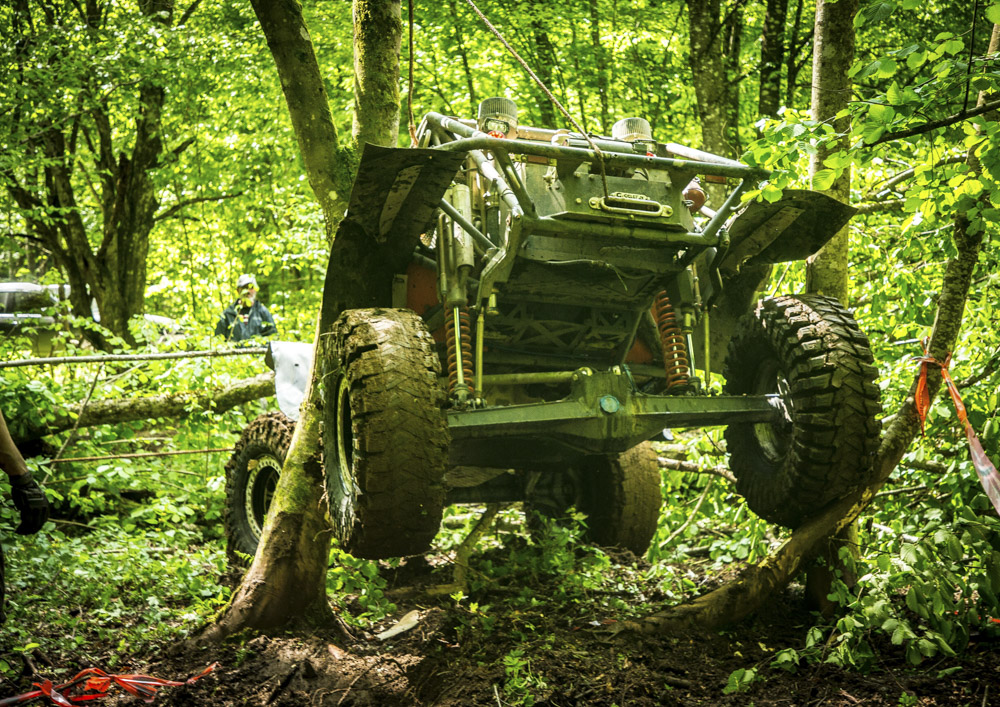 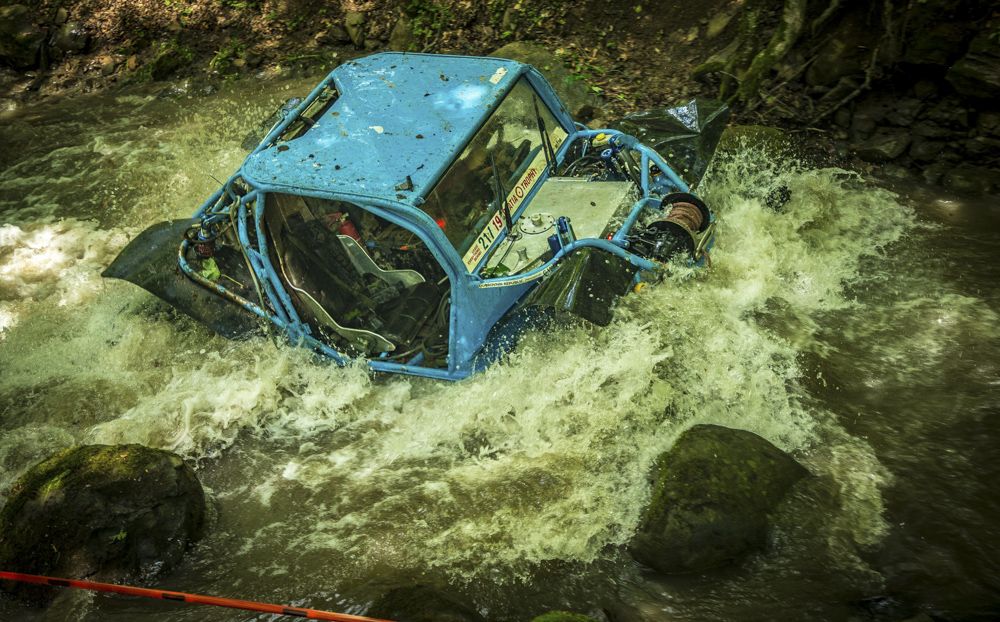 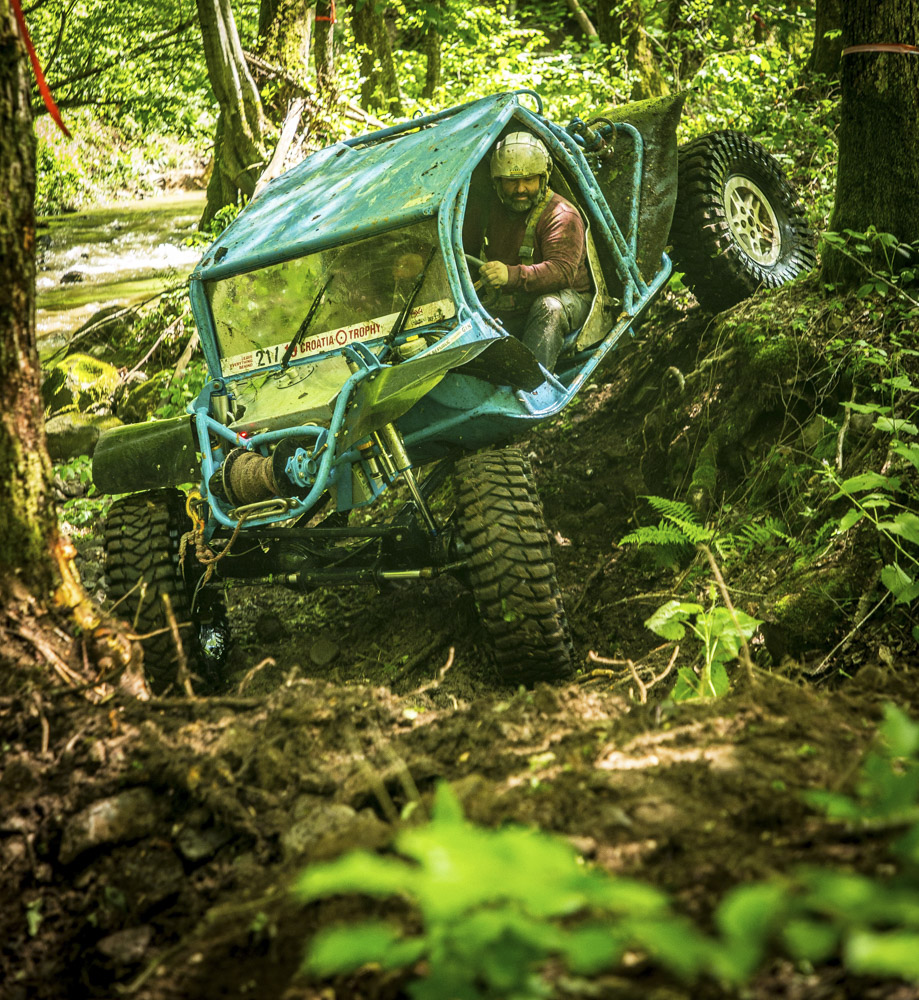 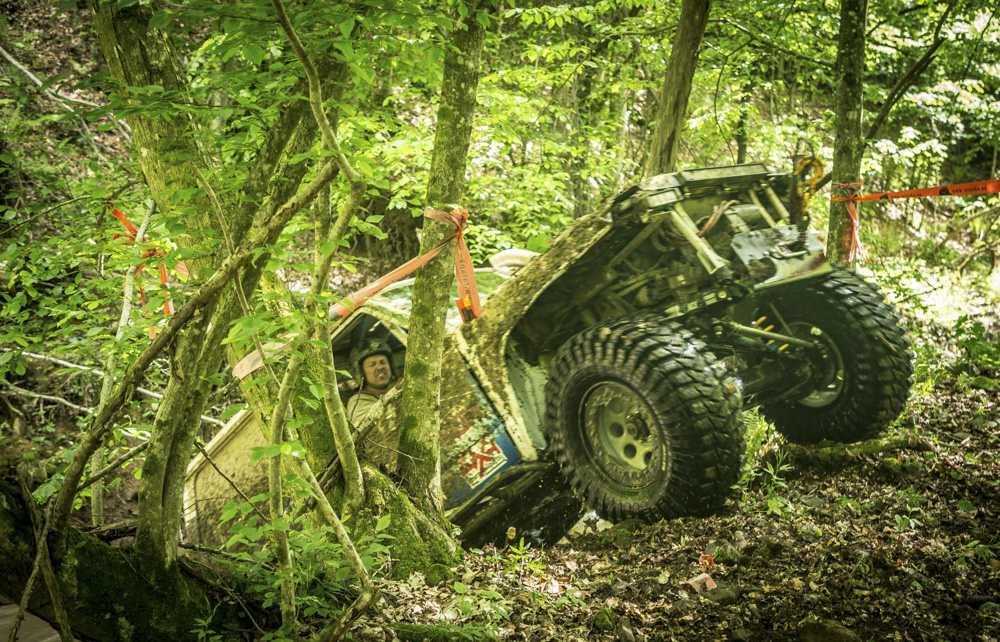 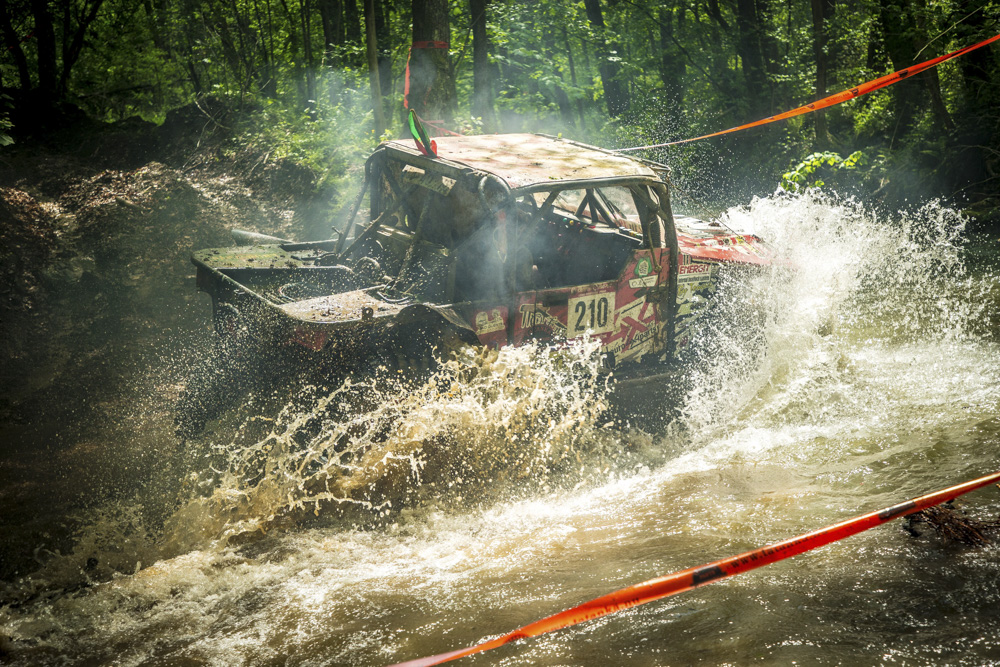 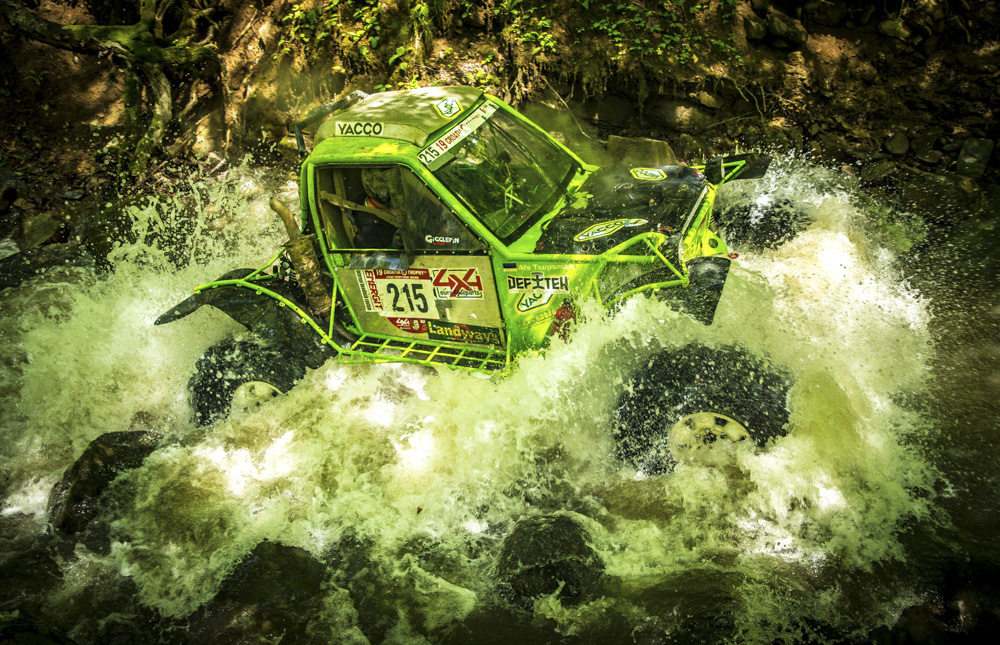 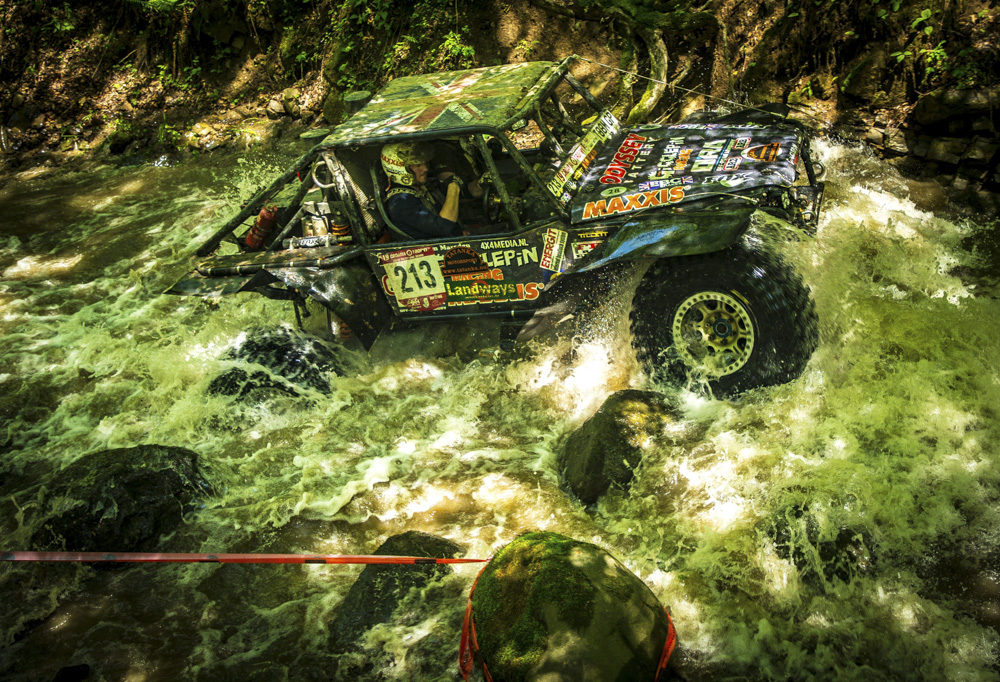