Story and Photos by Robb Pritchard

At the foot of a range of barren mountains in the middle of Iceland a domed tent houses a team of scientists operating a nearby robot. At first, controlling a buggy from a laptop might not sound too much like being a part of the ultimate off-roading project, but even for a seasoned off-roader, what the scientists are working on is quite mind-blowing. The systems being developed in this remote and desolate landscape will soon be an integral part of the world’s most sophisticated off-road vehicle. Not for any expedition on Earth through, what is being developed is for the terrain of another planet.

The next Mars Rover.

And to get to such a remote test site, far across treacherous alluvial glacier flows no normal 4×4 could cope with, the Mission Control team turned to one of the biggest players of extreme terrestrial off-roading; Arctic Trucks. We went to the land of fire and ice to join them on a mercy mission. And had a cup of tea.

Out of the capital, Reykjavik, Iceland, away from the Viking themed souvenir shops and the world’s most expensive beer, it doesn’t take too long for Iceland’s famously epic wilderness to start… and the tarmac to end. With the specially made 38” tires at 11 PSI driving feels like a cross between trying to predict the humorously vague steering of an old Land Rover and a hovercraft. But floating over the rough surface means we can easily do 30 mph where normal 4×4’s would be crawling along wondering when they’d next get stuck in a patch of soft volcanic ash or have to winch over a ledge of solidified lava.

Unless you are in a rally-raid, speed generally isn’t the most important element of off-roading but when you have literally thousands of miles to cover, such as traversing the Greenland ice caps or driving the thousand miles from the Antarctic coast to the South Pole, more speed means less time travelling, which in turn means you can carry fewer supplies. On a massive expedition when percentage savings can mean tens of thousands of dollars, it’s a real advantage.

At a barely discernible track between the stratified lava a sign warns that the road ahead is impassable. For Arctic Trucks, of course, practically nothing is impassable. There is one slight adjustment needed though. In soft sand lowering the tire pressures to increase the ‘footprint’ makes a huge difference, but it’s a seriously time consuming process to air them back up again. The CTIS system, where all tires can be inflated from a button in the cab, saves having to get out to do each tire individually. In a -50 C Antarctic blizzard this can, without exaggeration, be a life saving device. But now Arctic Trucks has developed an app that controls the pressure of each tire from a phone screen, so that not only they can be constantly monitored, but they can also be individually adjusted with just a tap. And new technology was the theme of this trip.

For three decades, company founder, Emil Grissom has built 4×4’s capable of getting to some of the remotest and most hostile places on earth, to the point that these days, Antarctic expedition drives are almost routine. Able to get to such places with ease where others wouldn’t even attempt, the tourist potential for Arctic Trucks is self-evident. But now they are expanding in a slightly different direction. Science support. Higher learning institutes as well as agencies all the way up to NASA need to get personnel and equipment to very remote and inaccessible locations for experiments, research and training. Formerly helicopter drops or flights on a specialized plane were the only way of transporting people and equipment to such sites. Such costs made many projects not financially viable but with the incredible capabilities of Arctic Trucks’ fleet of sure-footed Toyota Land Cruisers, Hi-Luxes and recently Nissan Navaras, there is now much more potential for equally as extreme, yet much more affordable projects.

One of which Arctic Truck’s Sune Tamm, took me out to see. Mission Control, a Canadian-based space research company, chose the otherworldly landscape on a remote alluvial plain at the foot of the Langjokull ice cap because it has the most similar terrain to Mars on earth. The remit for their three weeks of research, was to develop software to study different soil compositions in the complicated and convoluted alluvial strata. Artificial intelligence software, for when the robot is on a planet up to 40 light minutes away, learning how to work by itself can save massive amounts of program command time. Once programmed to perfection from what they’ve learned in Iceland the systems will be integrated into the Rover and flown through space for months to the Red Planet. It might sound a bit far removed from green-landing, but standing under the glacier and watching it work was pretty amazing.

Getting there was a real experience, in inself. A biting wind was blowing over the icy wastes of the glacier that loomed high above, a ridge of stunning blue at the melt line. We made our way across the valley and if any plants grew here the treacherously soft and muddy silt would be a bog. The massive footprints of the tires kept us on the surface, in an almost desert-like landscape, getting stuck is not an option… especially as the nearest thing to winch to would have been a couple of days walk away. Getting stuck somewhere serious, such as Antarctica, and the repercussions could be worse by several orders of magnitude. Pulling out to the command tent on a little high ground near the valley mouth the robot itself didn’t look too impressive, more like a chunky tired milk float than the ultimate off-roading vehicle, but that’s because it’s not the actual Rover that will go to Mars. The super-advanced suspension and drive train systems are being developed by another company, and so the robot here was just a test bed for the important scientific instruments such as the all-important spectrometer. But talking to project director Evan Reid he explained just how big a deal sending a robot to Mars actually is. The information sent back will be directly used for the advancement of humanity, preparing for the colonization of the planet, and other knowledge gained from this Rover will be used for the initial manned missions. And it was absolutely fascinating to get a glimpse of the level of skill and expertise that goes into such work.

Our mini-expedition that day was no less critical. As well as going out for a photoshoot, a water pump had failed which had caused a critical issue with Mission Control’s tea making facilities. And was therefore hindering the advancement of local humanity. New pump delivered, along with a few other things, hot beverage crisis averted, we had some time before we needed to be back in the city… and so we decided to drive up a nearby volcano.

If the Land Cruiser 150 AT38 had been any less of a 4×4, a spotter would have had to jog ahead to make sure no diff casings caught on any of the sharp solidified lava rocks or dug into the areas of soft volcanic ash. With some sand ladders they could maybe have bridged some of the larger gaps and it would have been a great sense of achievement that they got to the summit. However there’s not so much of a story for us. We put it in low-gear and drove straight up. Not much of a challenge but that’s what thirty years of developing vehicles to operate in the world’s most inhospitable environments is worth.

Getting out near the summit, seriously impressed at the severity of the track we’d just tackled so easily I had to ask, “what is it exactly that makes Arctic Trucks so capable and successful?” On the way back down the convoluted volcano slopes Tamm explained that an Arctic Truck is so much more than its oversized tires. The secret of lifting is not to just go up as simple suspension and body lifts cause the centre of gravity to rise, which severely impacts a 4×4’s off-roading capabilities. More importantly though it puts a lot more stress on all the re-angled suspension and steering components. In the environments Arctic Trucks deal with the last thing you want is an unreliable vehicle. It means a lot more work and expense but taking off the whole suspension subframes and remounting them two inches lower means that all of the geometry remains the same as the manufacturer intended. And surprisingly, despite the massive monster truck tyres and the hard lives these trucks lead, all the parts are standard.

Although there are plenty of photos of the trucks in action in various snowy situations there aren’t many of their inner workings. Exclusively for 4Low Magazine Emil let us see the bare chassis of a Land Cruiser in the process of being modified.

One big change for the trucks made for the severest conditions is the extended wheel base. The weight balance needs to be biased to the front as the back axle needs to push the front wheels forward. If the rear wheels sink in soft snow the car will just be trying to dig itself out all the time and will be constantly stuck. To engineer this critical balance into the car the rear axle is re-mounted two inches further back. Obviously this involves cutting large swathes of metal out of the bodywork, but the rather ungainly lines left are covered by the thick wheel arches. A custom propshaft gaps this extra distance.

To quantify the stellar success of Arctic Trucks it’s perhaps easiest just to state that despite making such serious upgrades the modified 4x4s are now sold on Toyota and Nissan forecourts as OEM products. There can be no higher accolade for Arctic Trucks’ design and engineering skills. Apart from perhaps being an integral part of the advancement of humanity. 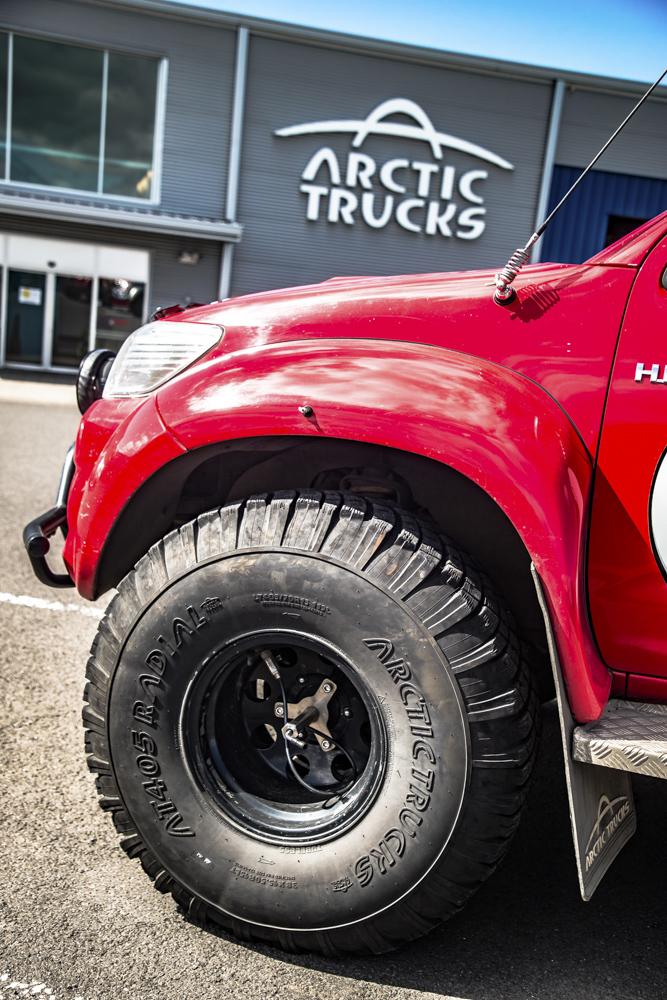 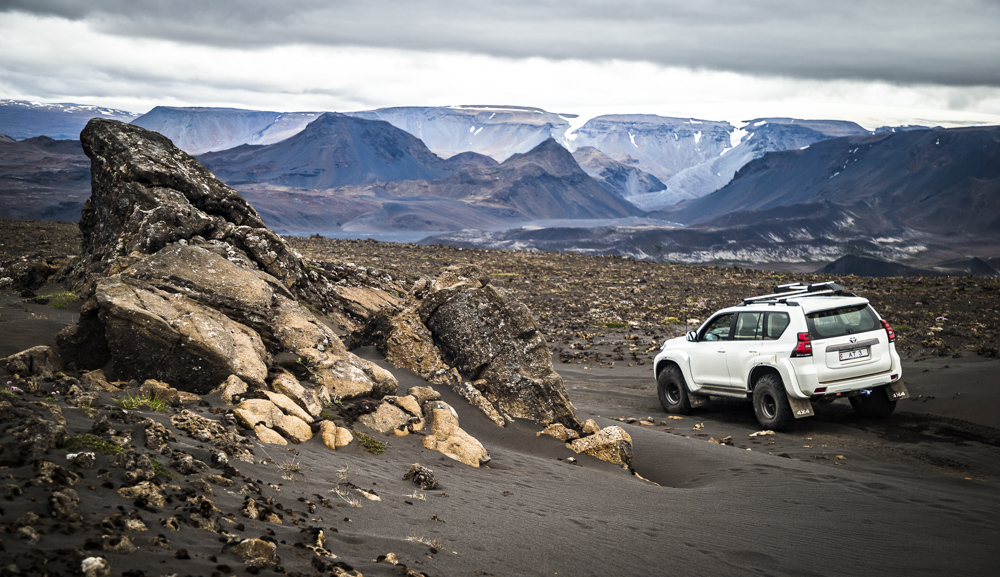 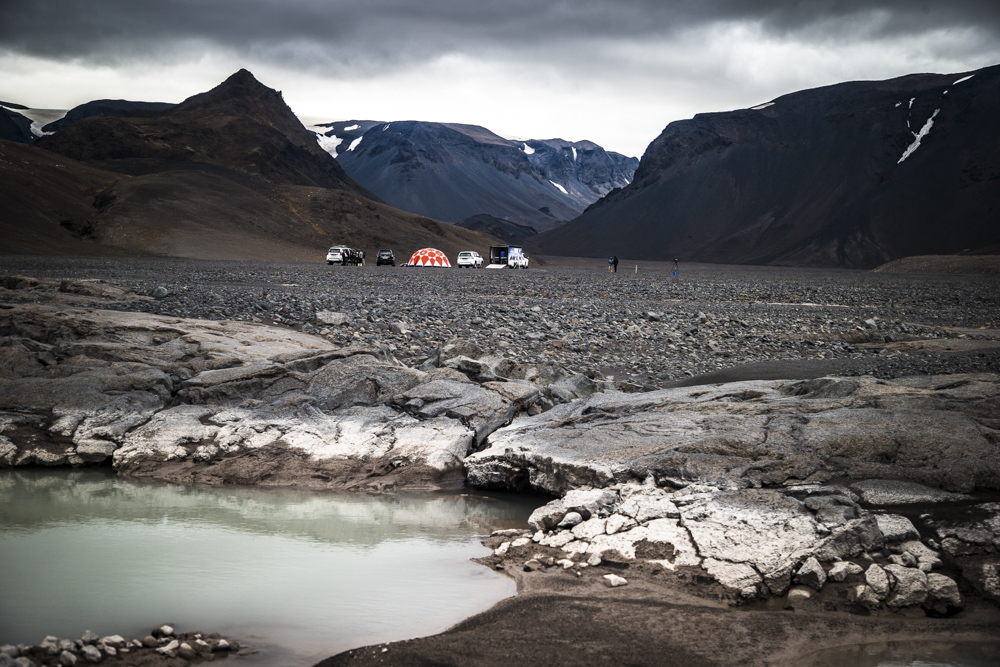 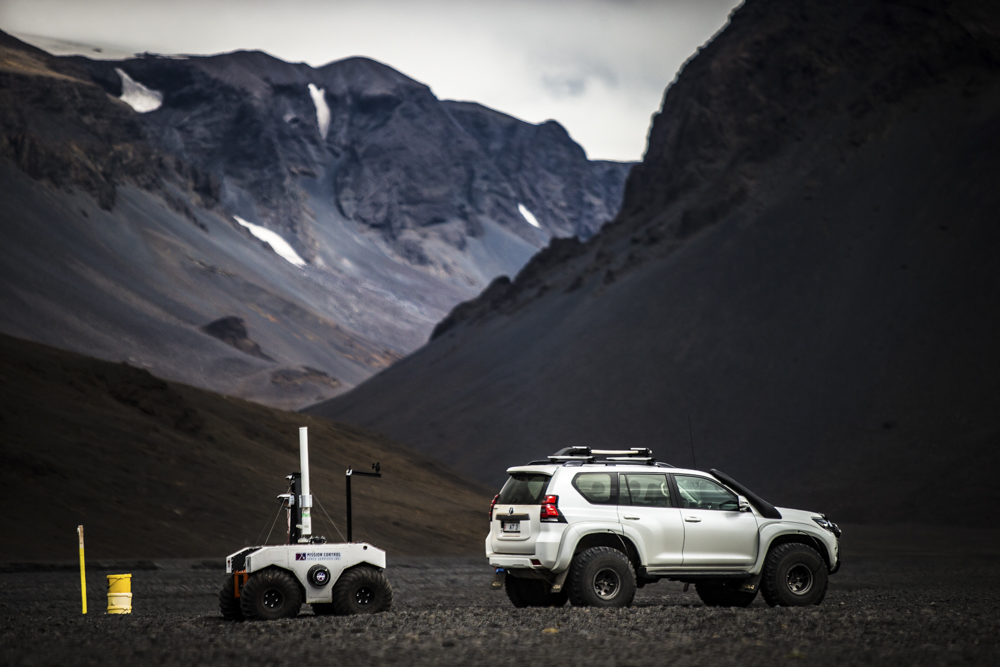 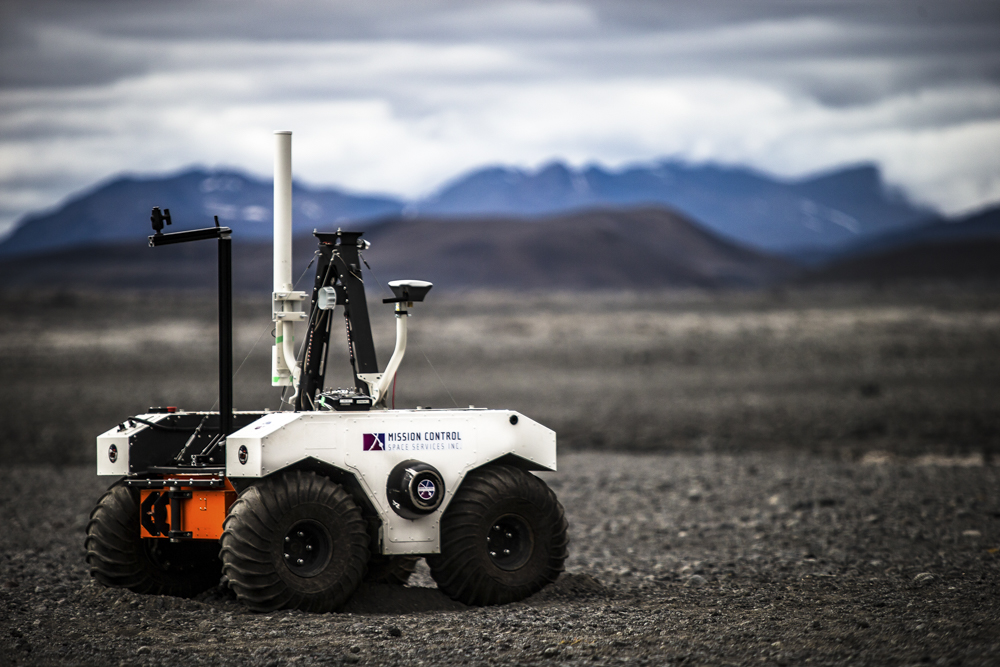 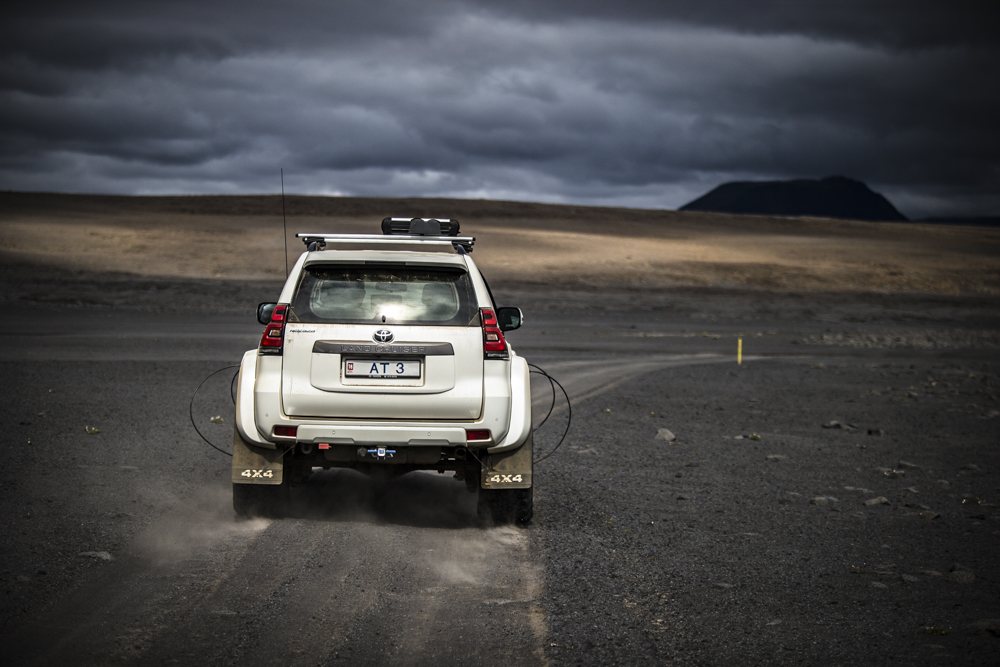 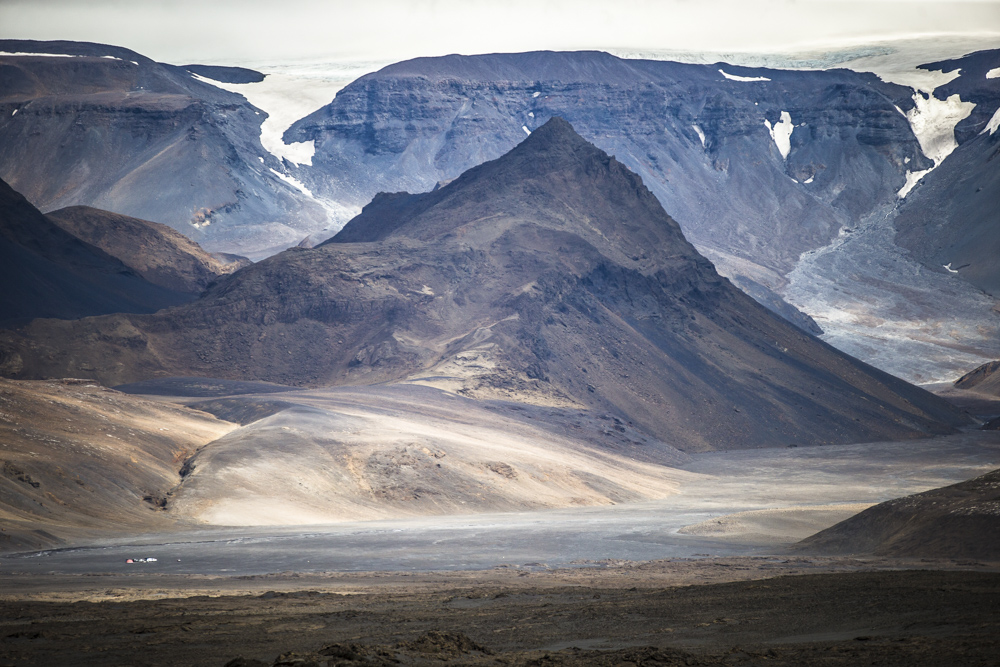 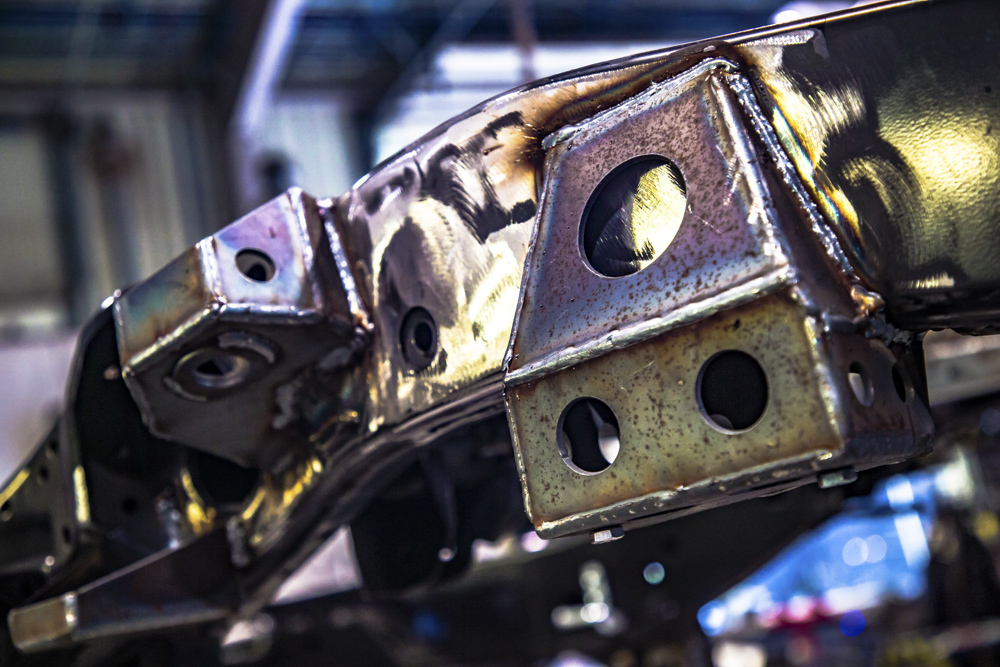 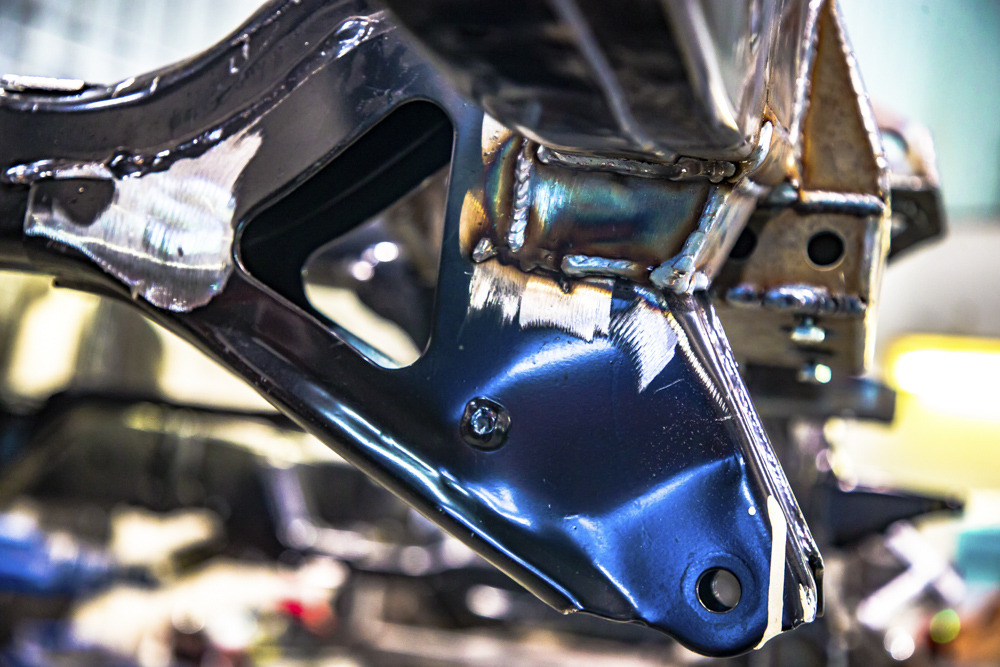