24 Hours on the trail, straight, no sleep, no turning back.  Windrock Park, has over 300 miles of trails on over 72,000 acres.  Located in the Northeast corner of Tennessee, you’ll find giant rocks, deep mud, steep hills and slick terrain, the perfect setting for 24 hours of hell.

Seven rigs headed out at 9:30 a.m. from the Windrock General Store with 22 trails mapped.  The goal for each participant was simple:  push themselves and their rigs harder and farther than a typical day of wheeling.

“The idea of a 24-hour, hardcore wheeling event has been in my head for a while now, “ said Marvin Stammel, founder of Flex, Rocks and Rollovers and the instigator of this event.

“I’m on a mission to create extremely challenging, multi-discipline 4×4 challenges.  Specifically designed to push the driver and co-driver to their absolute limits and beyond.  Literally to Hell and Back!  Eventually, I’d like to see something like this adapted to include Jeeps, Trucks, Buggies and possibly UTV’s.  But first, we had to test the model.”

Six days prior to kickoff was when the decision to wheel was made, with short lead time, it meant gathering a small group of local friends for the first run.  The purpose was to test and set a benchmark.

Twenty-two trails were mapped, including many double diamond rated trails.  Overall 60 miles of trails were completed.  The newly released Windrock Park App with its’ interactive map helped in the development of the team’s route.

On Saturday morning, the group left the parking lot with the goal of getting to the north-end of the property in a hurry.  On the way, Trevor Galloway encountered a fuel pump failure followed by transmission problem, after a handful of creative approached to fix the issue, he made the call to turn around.  Trevor was the only one to not make it to the end.  With the delay and more dirt road ahead, the group hopped off to Devil’s Elbow for a challenge on the way to the north end.  A very steep and rocky climb, the teams would hit this again on the way back down.

Lunchtime found the group at the Caryville Flats trail system, a bunch of different hill climbs, it is a great place to mess around and have some fun.

Local, Jeremy Rose, was able to locate the entrance to Trail 7.  Trail 7 has been off the map for awhile and is extremely overgrown with steep, loose hill climps, non-stop, one after another.  It was here that Hollie Fowler’s front wheels stopped spinning, a brief investigation found the driveshaft had disconnected at the transfer case.  Fortunately, another group member was carrying a spare Tom Woods driveshaft with the exact bolts needed to make the repair.

At 4:23 a.m. the teams found themselves at Trail 15, a gnarly washed out trail that has you rocking back and forth and side to side throughout.  Close to camp, but not through the tough stuff yet, a JKU sized boulder has to be conquered and then a set of stairsteps up a wide and steep rock face.  Undercuts and muddy sections add to the challenge.

The final trail of the 24 hours was Rattle Rock, the final challenge a mile long boulder strewn path that is one of the most difficult on the Windrock property.  After 22 hours on the trail, it took two more hours to get all vehicles through and finish at 9:30 a.m., exactly 24 hours after starting. 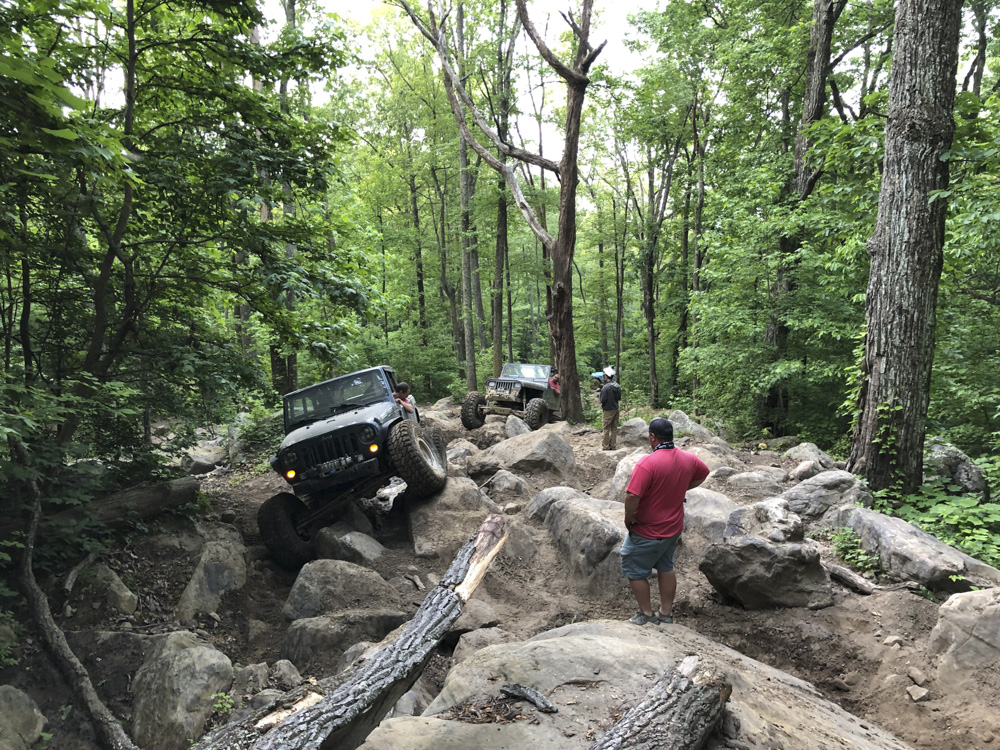 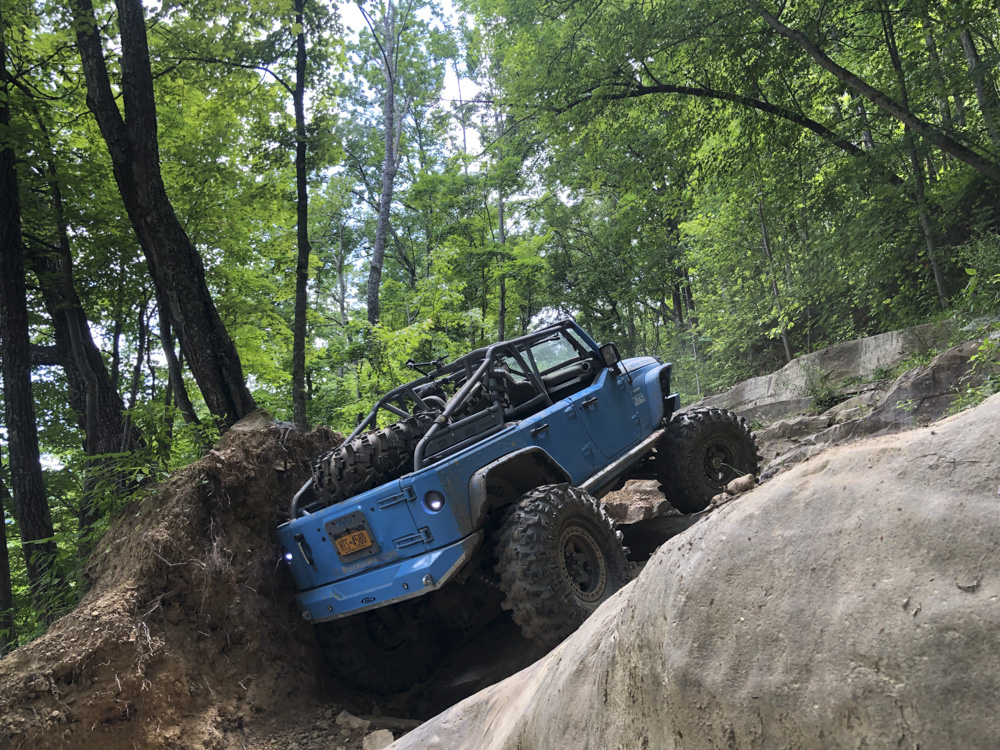 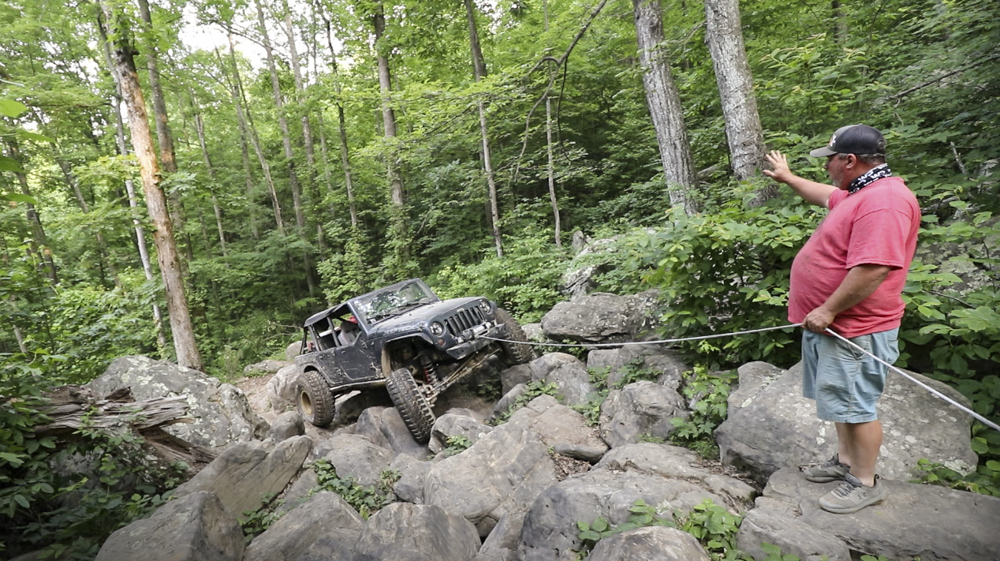 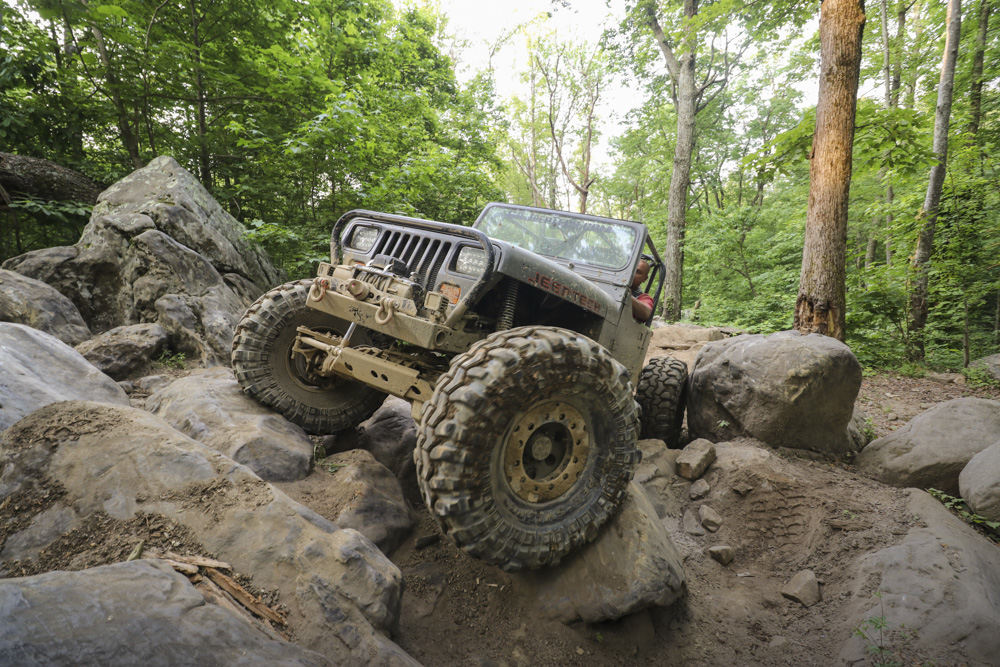 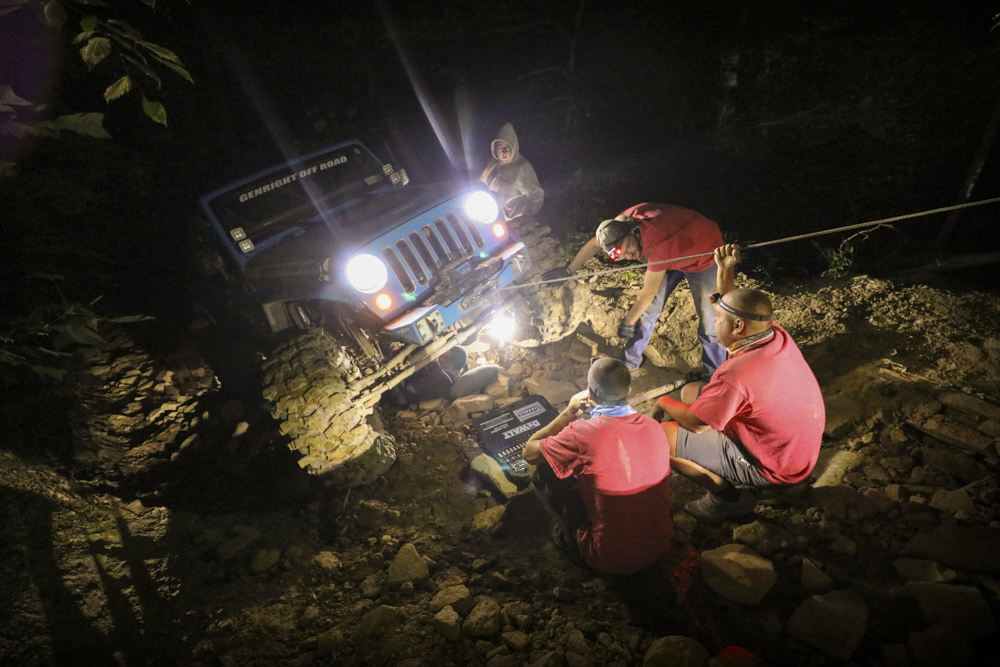 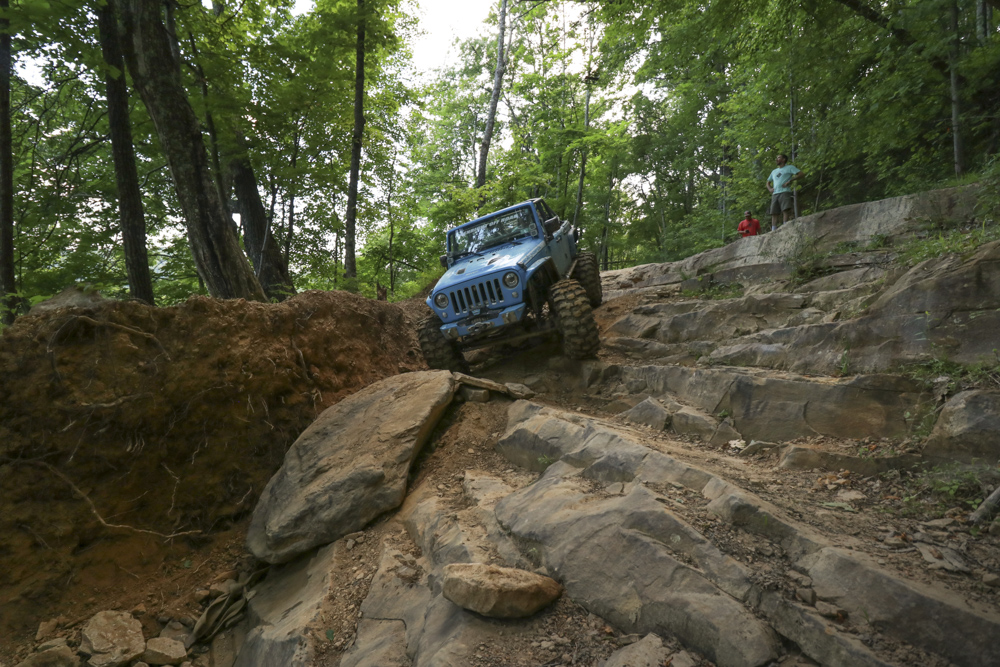 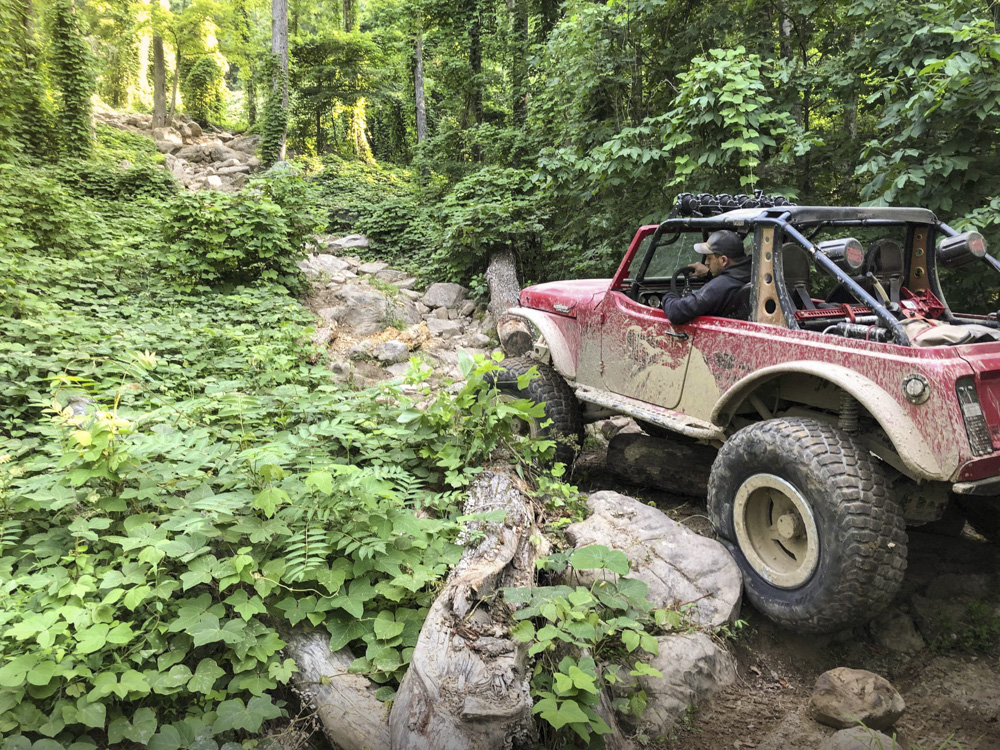 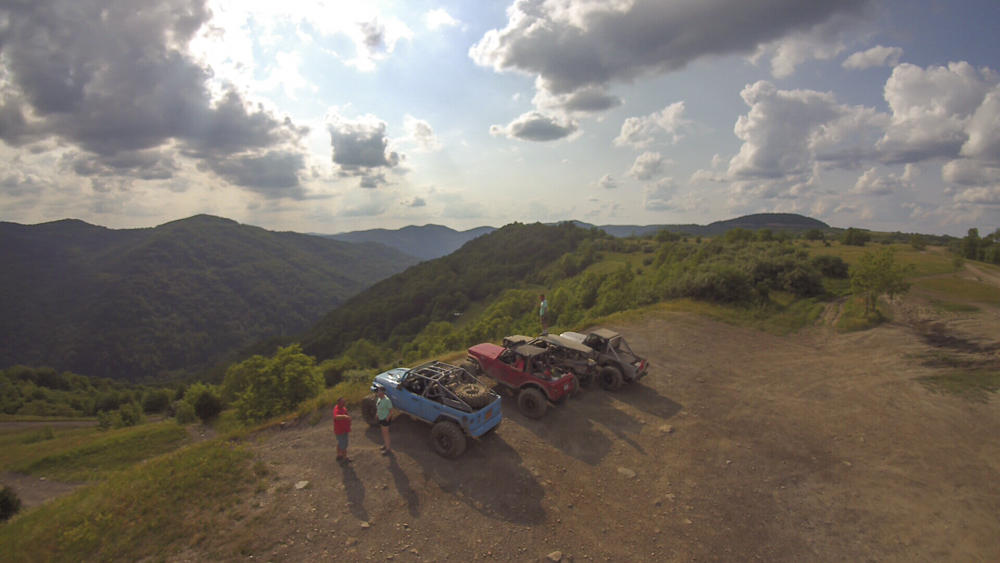 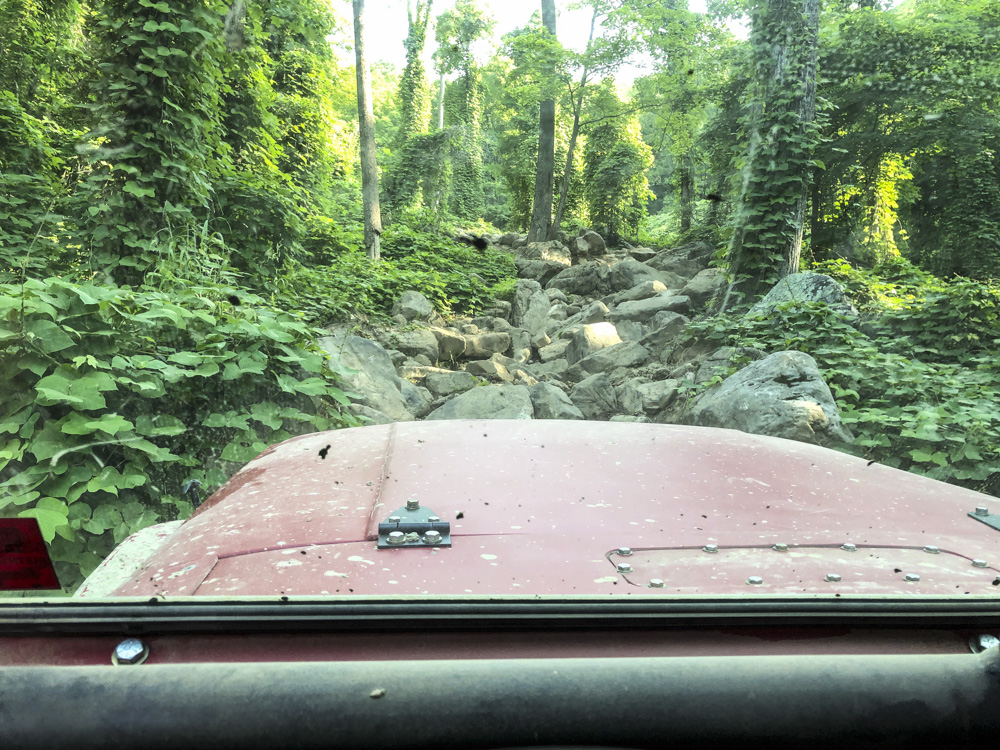 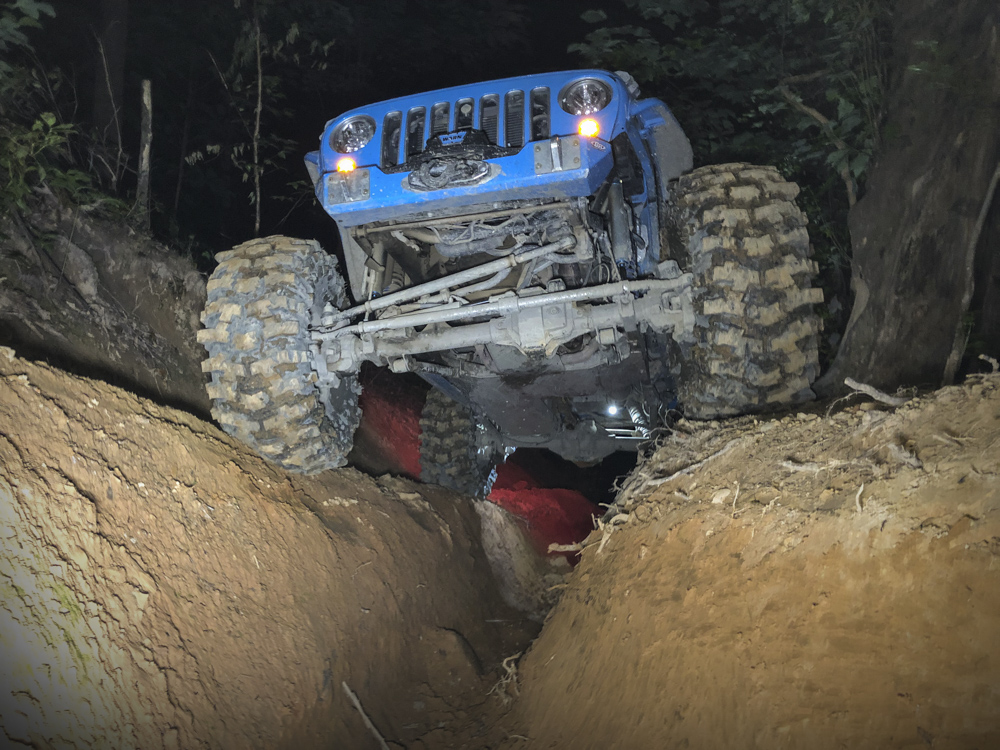 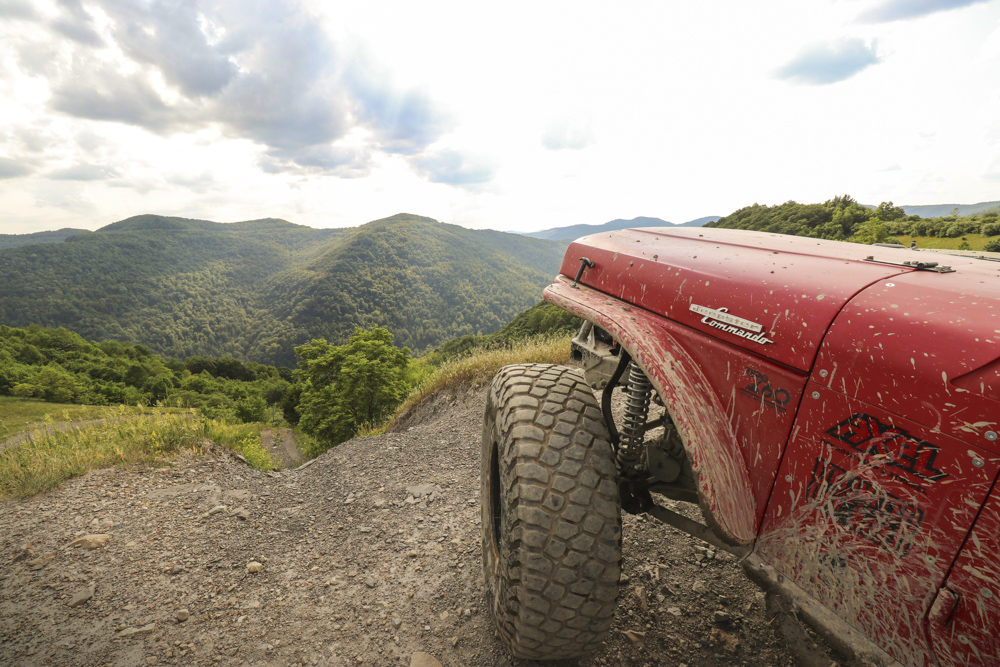