Story and Photo by Julie Covert

July 2010, I moved from the suburbs of Baltimore, MD, to living off-the-grid on Shelter Island, a remote island found off Drummond Island, MI, on the eastern end of the Upper Peninsula. During warm weather, April through October, my husband, Hugh, and I boat from Shelter Island to our dock on Drummond. The rest of the year, the commute to work and town can be arduous.

In 2010 I had no clue about off-roading. My family had considered ATVs a nuisance and not eco-friendly. Jeep Scramblers were cheap when I got my driver’s license, but Mom had seen the 60 Minutes exposé that said Jeeps were dangerous, so no way was I getting one. At least not then. When I moved here, I quickly realized that my beloved VW Golf TDI was entirely the wrong vehicle for the two-track that I would have to learn to negotiate in all seasons.

To get to town in winter, we go “over the river and through the woods” to get to our Jeeps, but the fun does not stop there. Our island kisses up to Drummond with about 200 yards of water between the two. After a mile hike from the house to the end of our island, we cross the water either by canoe or wading in chest waders, to get to Drummond. There we hike another 1/2 mile to where the Jeeps are parked at a friend’s summer cabin. By this time, we’re all warmed up for what is in store for us — three miles of two-track that the county does not maintain, so we have to. Then it’s two miles of county dirt road before getting to pavement, which is fourteen miles from our small town. All of this adds up to a 20.5 mile, hour-long “commute” if we don’t get stuck.

Winter number one, Hugh picked me up in his 4WD lifted pickup at the end of the two-track and we went home together. Spring came and he declared “Julie, we need a Jeep for you.” After a few months, we found my first Jeep, a manual transmission ’82 Scrambler with a fiberglass tub and soft top that we put BF Goodrich T/A KO 35s on. Later together, we’d do a complete rebuild as the frame was rotting, but that’s a story for another time.

I easily learned to drive on dirt, mud, and rocks, but driving in snow turned out to be an entirely different beast. When Hugh started teaching me about snow driving, he said “It’s a lot like driving in sand.” That didn’t do me much good as I’d never driven in sand. What he meant was:

Plowing is not an option for us, because there is nowhere to push the snow along the tree-lined, boulder-strewn trail and three miles is a long distance to plow. The trickiest part of snow driving is staying on the packed trail, and not getting sucked in by soft snow on the sides. There are certain portions of the three miles where we don’t speak to each other, as the slightest distraction creates a slowed reaction, and the snow easily sucks a rear tire off the trail.

Along with all the winter safety tips, mentioned in the December issue, we carry tire chains for all four tires, a good shovel or two, a tree hugger strap to be gentle on the trees, a snatch block, and snatch strap, which comes in handy when we are both driving vehicles. We use chains in deep fresh snow or when we anticipate needing more traction.

And we carry flashlights. In Michigan, winter days are short, and we often find ourselves having to winch our way home in the dark. A reliable flashlight that easily and securely fits in my jacket pocket is a must to help me find the best strapping point on trees. Winching on a dark, cold night isn’t fun, but when we finally arrive home, that fire in the woodstove sure feels good.

I know a lot of women don’t care for the term “winch wench,” but I take it as an expression of affection that shows how helpful I am. We often ride together in winter, so as the passenger, it is my job to trudge through 12 to 36 inches of snow with gloves and the tree strap while pulling out the winch cable to the agreed-upon tree. Sometimes it is twenty feet, sometimes seventy-five feet away. Carhartt overalls or neoprene hip waders and flannel-lined jeans are imperative for keeping warm and dry in the deep snow. Hugh runs the winch controller, which is fed back through the driver’s window.

Rrrrr, Rrrrr, Rrrrr goes the winch pulling the Jeep out of the soft, deep snow we had been sucked into. Once back onto the packed trail, I unstrap the cable and guide it onto the spool. I quickly learned how to make sure it wouldn’t bind itself as we might need it soon, as in, maybe another fifty yards.

Some winters are worse than others. One Christmas Day, we spent an hour digging 100 feet of drifts that were up to the top of the hood to get to a friend’s house for dinner. Eventually, we built a snow drag and a snow roller to help widen our trail and knock down the tall snow hump in the middle. During some big storms, Hugh drives the entire trail a couple of times with the drag or roller to keep everything packed down and prevent drifts from getting too big. Winter 2018-2019 was our worst snow yet — even with regularly grooming the trail, the end of the season saw us winching nine times for two hours to go a quarter mile!

All that being said, winter Jeeping can be a ton of fun when you go with friends and people who know what they are doing. An organized event is a terrific way to begin to learn the basics of driving in snow. Having to get from point A to point B in your daily driver can be an amazing challenge, especially when you don’t know what you’ll encounter around the next bend. Being able to say “I did it!” is so rewarding, but trust me, you don’t want to have to do it every day.

Julie Covert lives off-the-grid year-round with her husband, Hugh, on Shelter Island in Michigan’s Upper Peninsula. She is a writer, photographer and has a charter, tall-ship sailing business with Hugh. See www.juliemcovert.com and www.ditallship.com 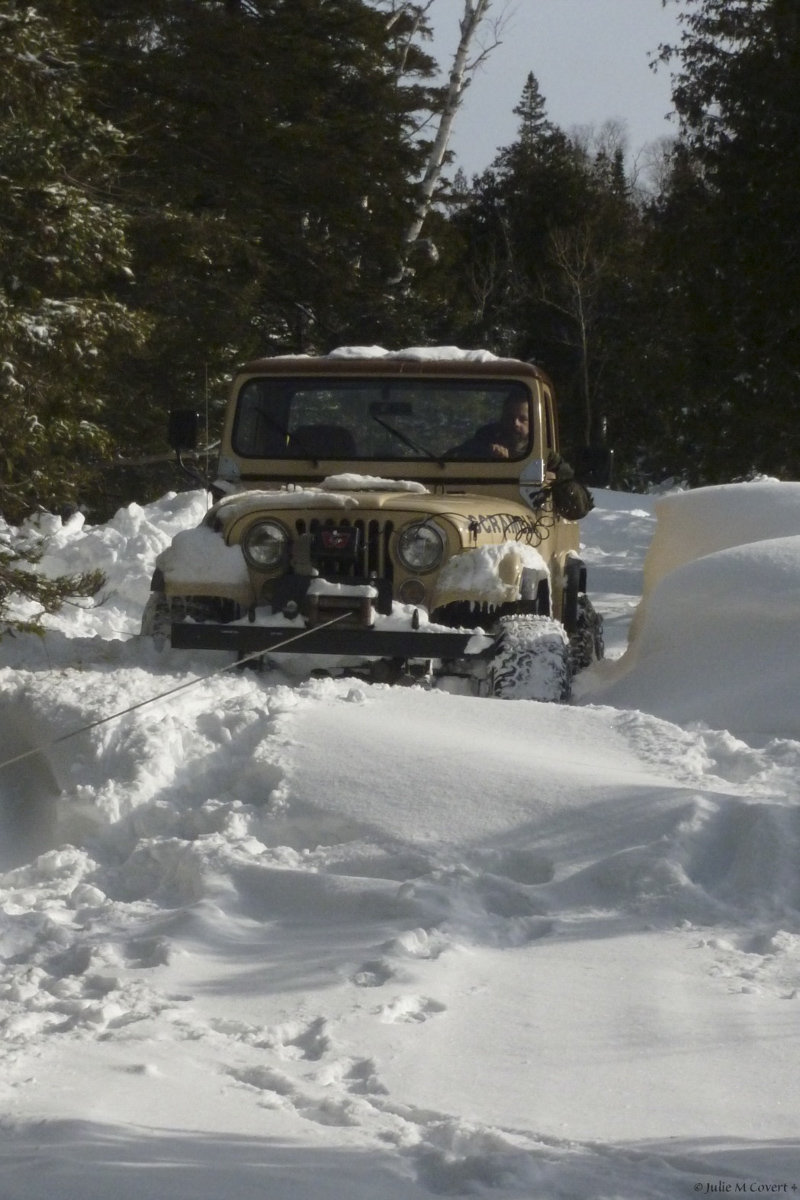 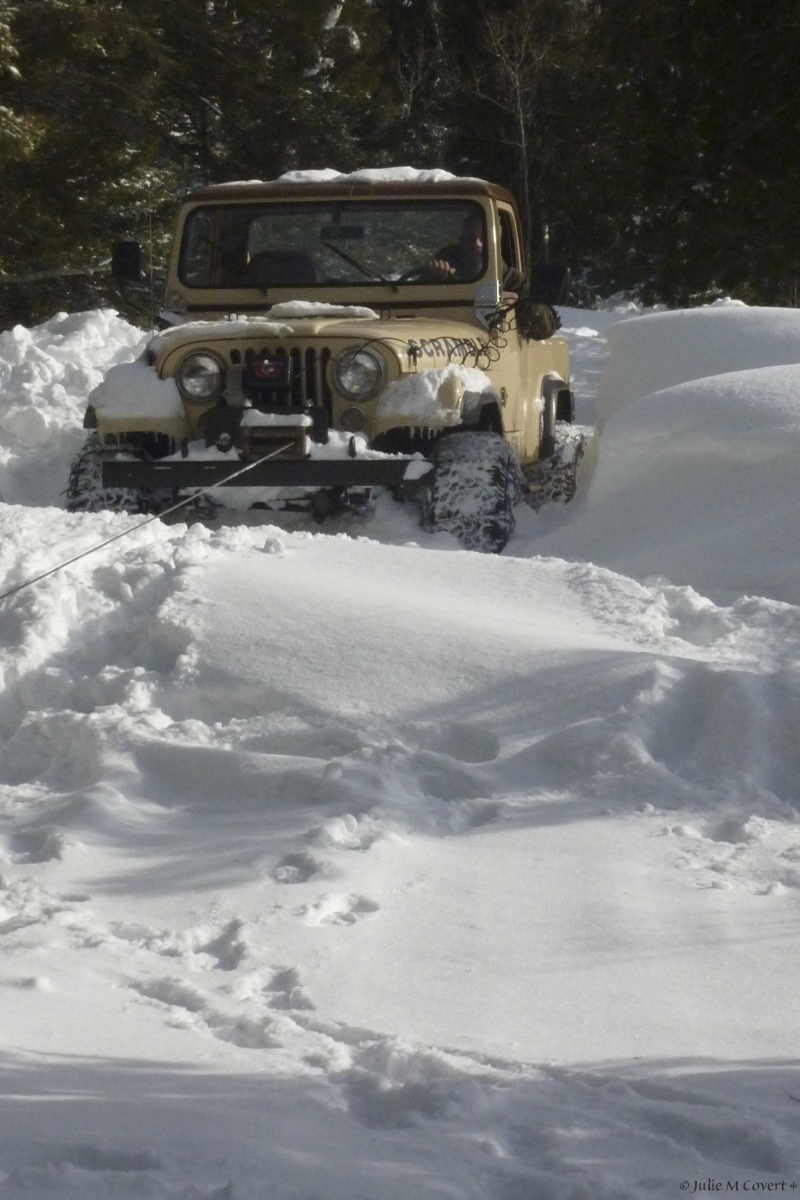 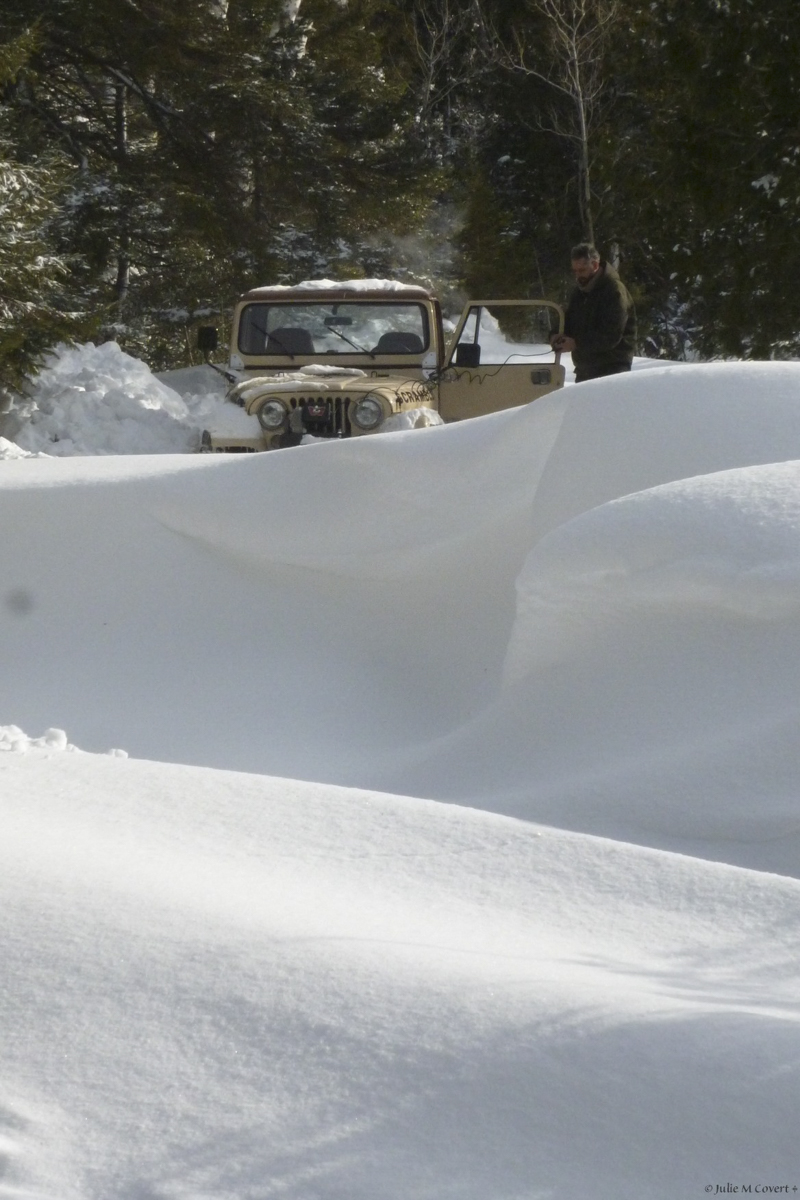 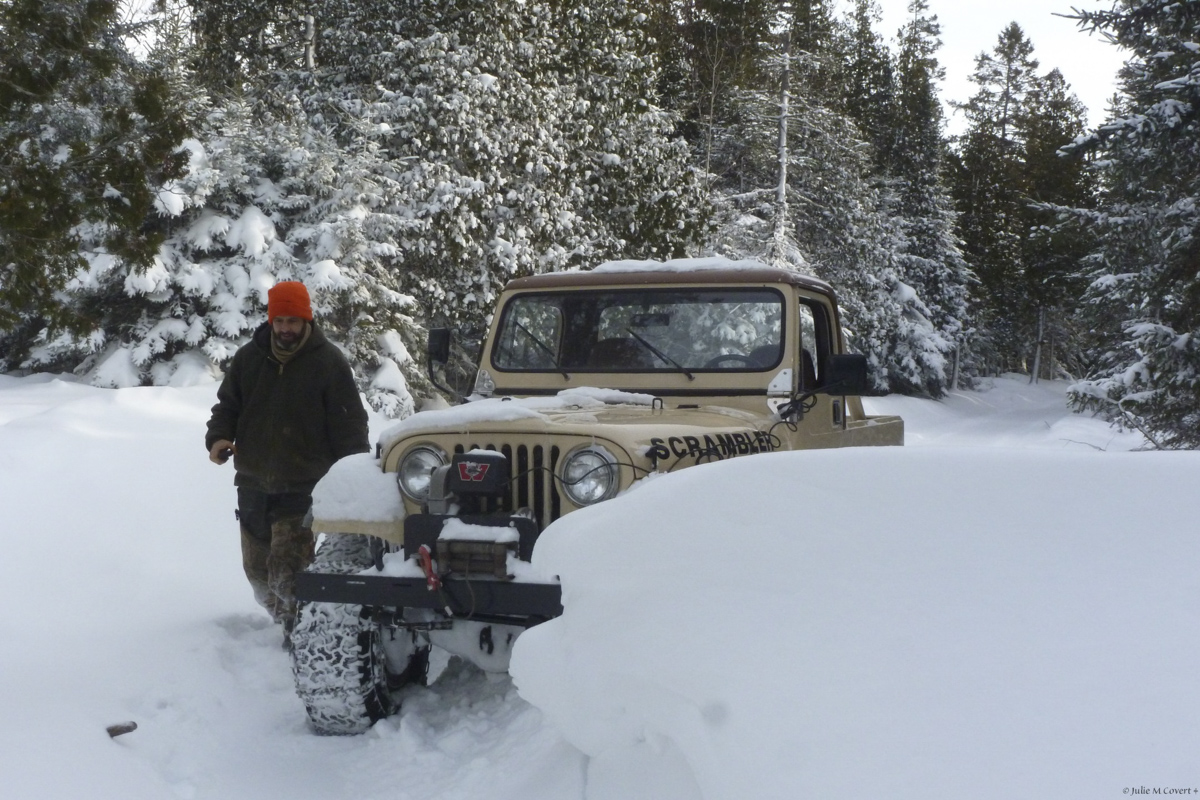 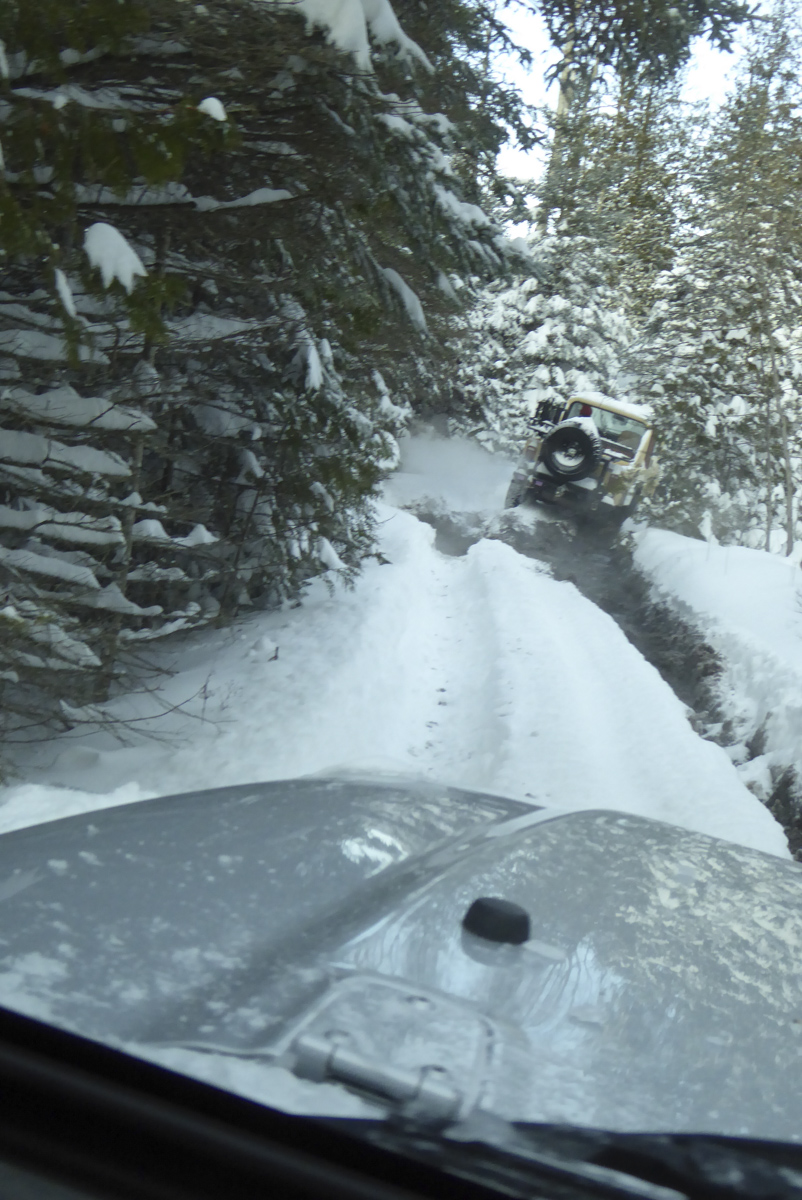 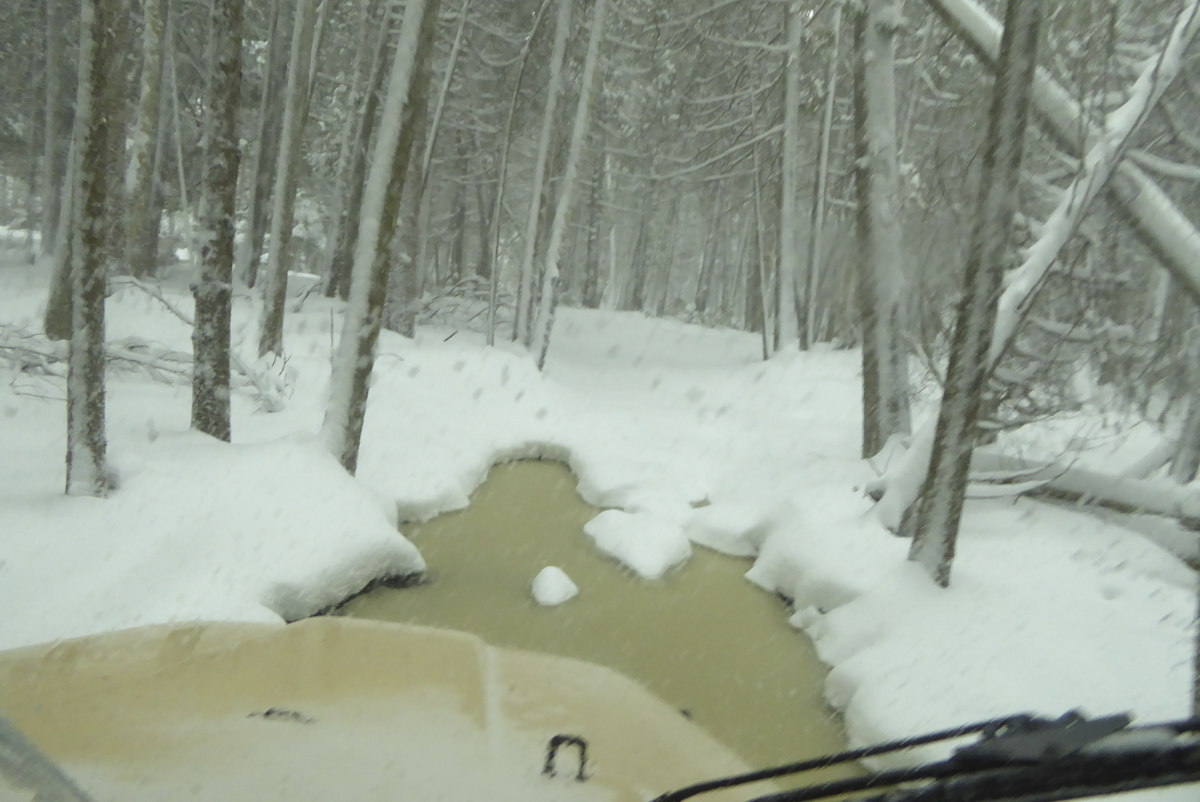 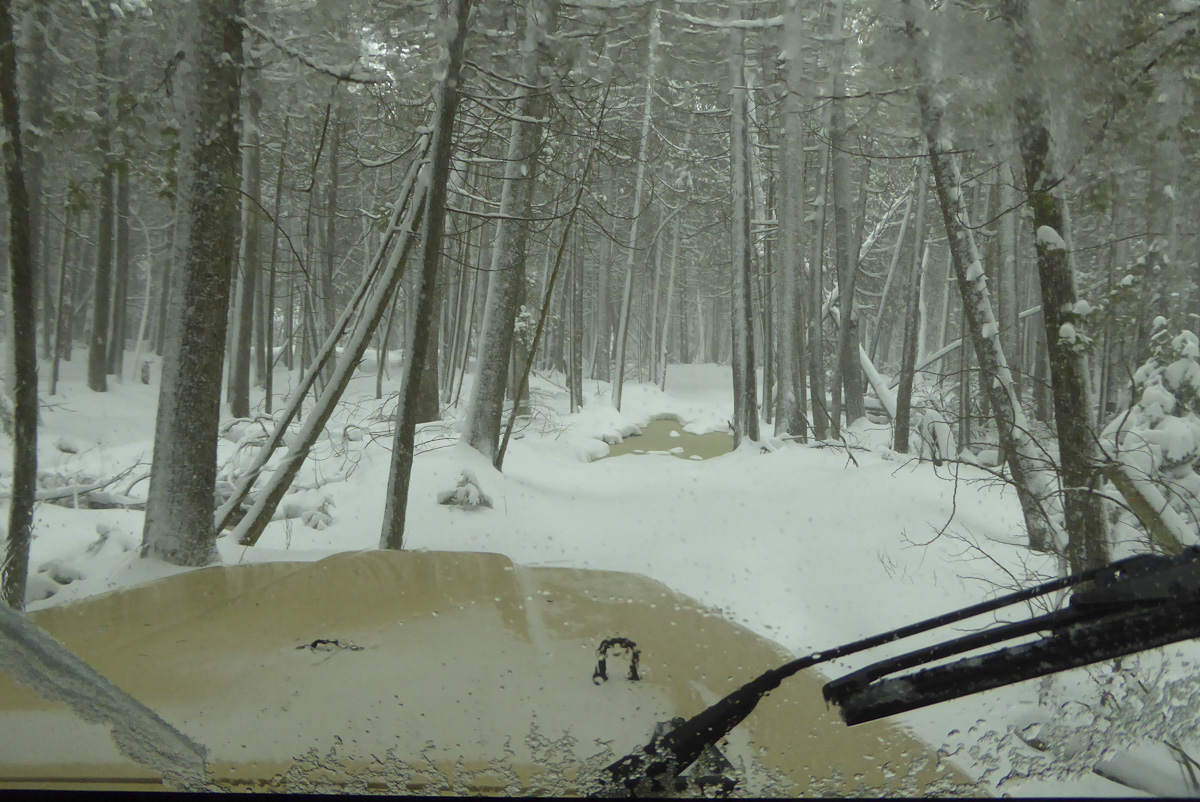 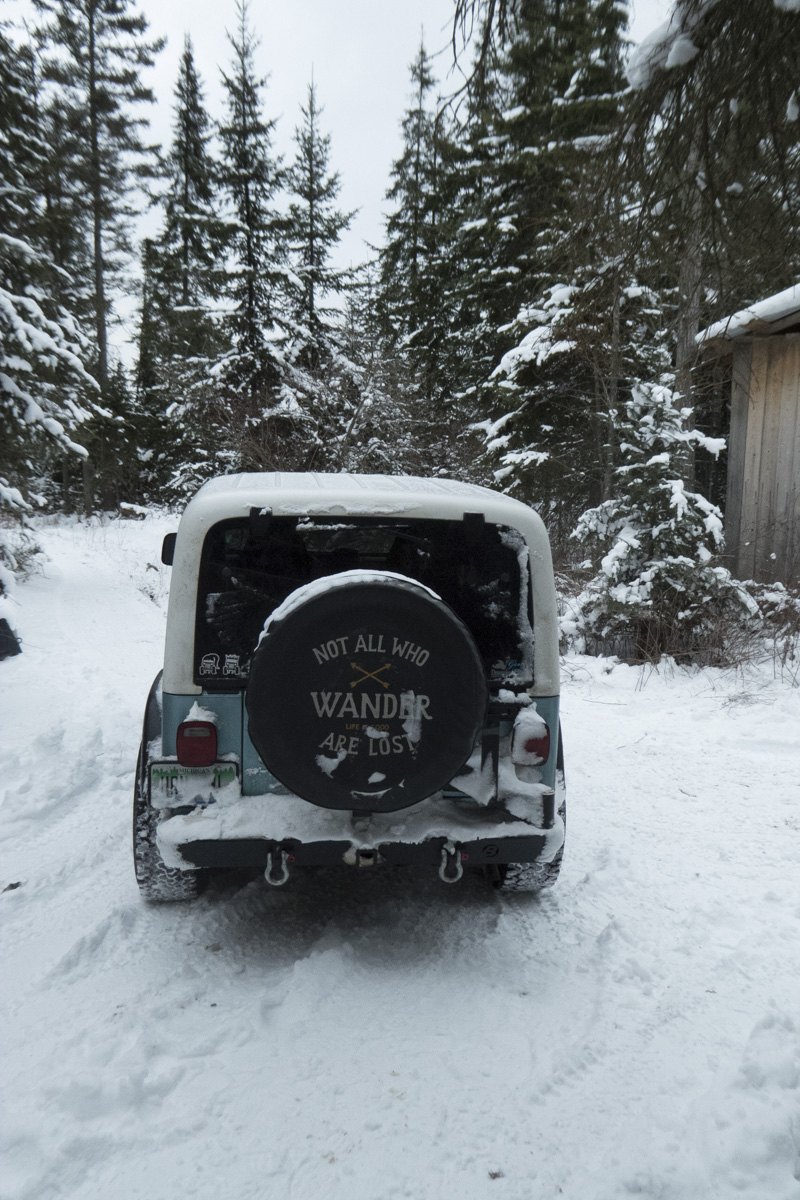 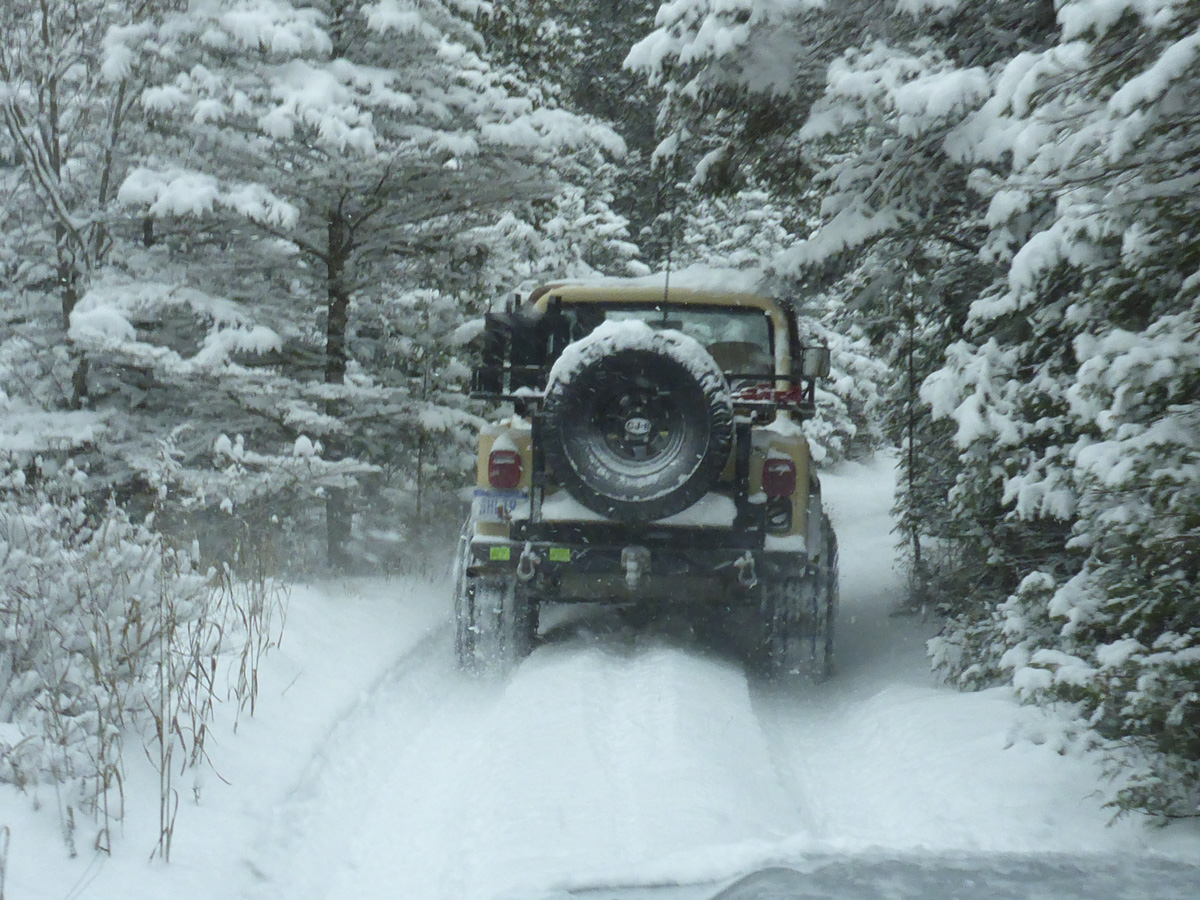 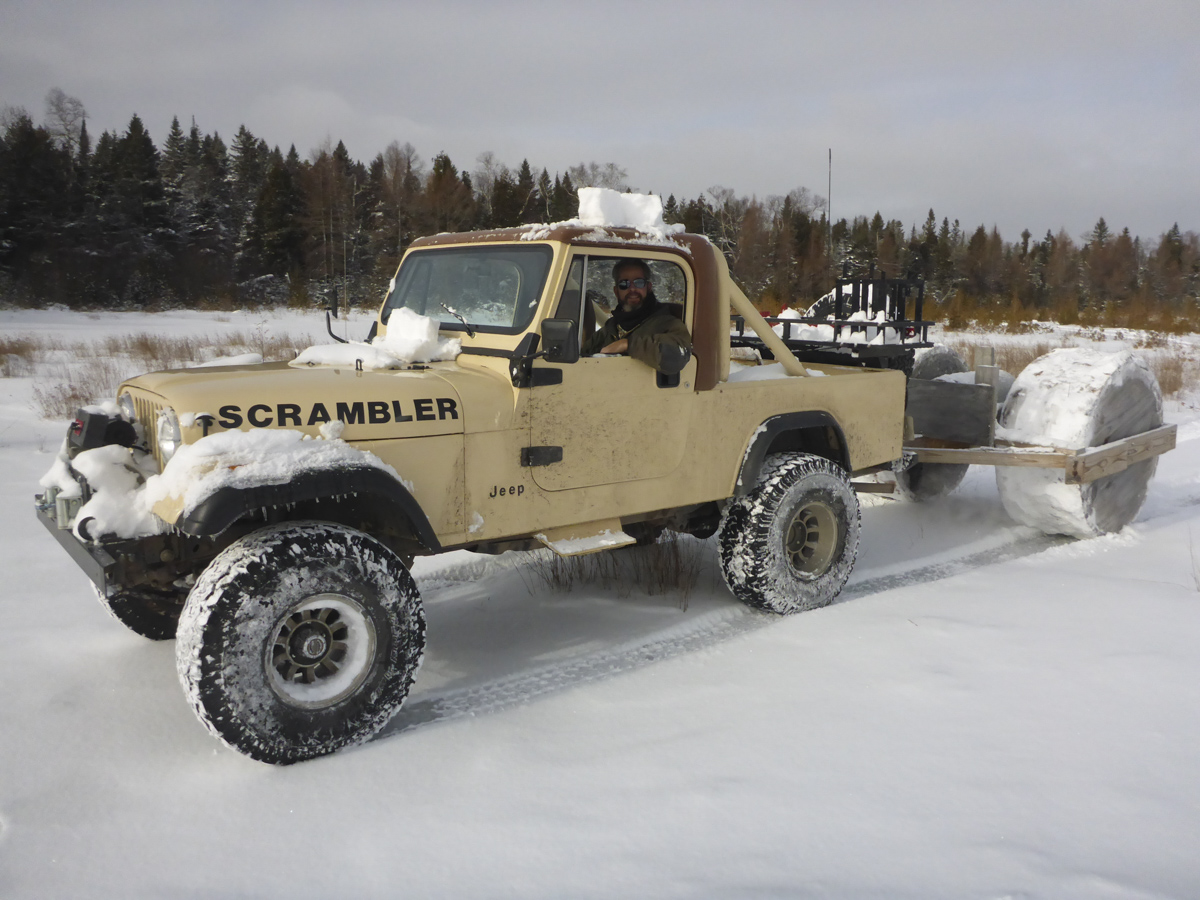 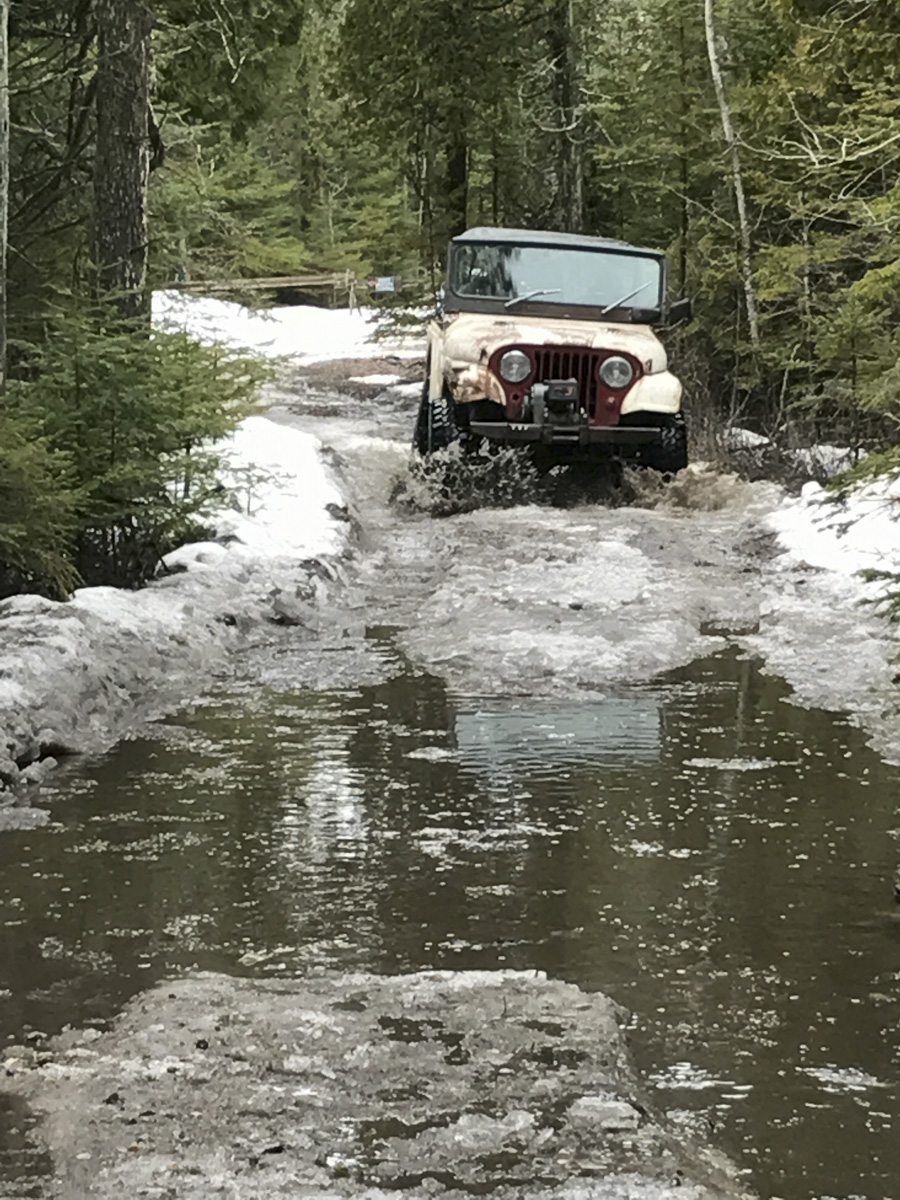 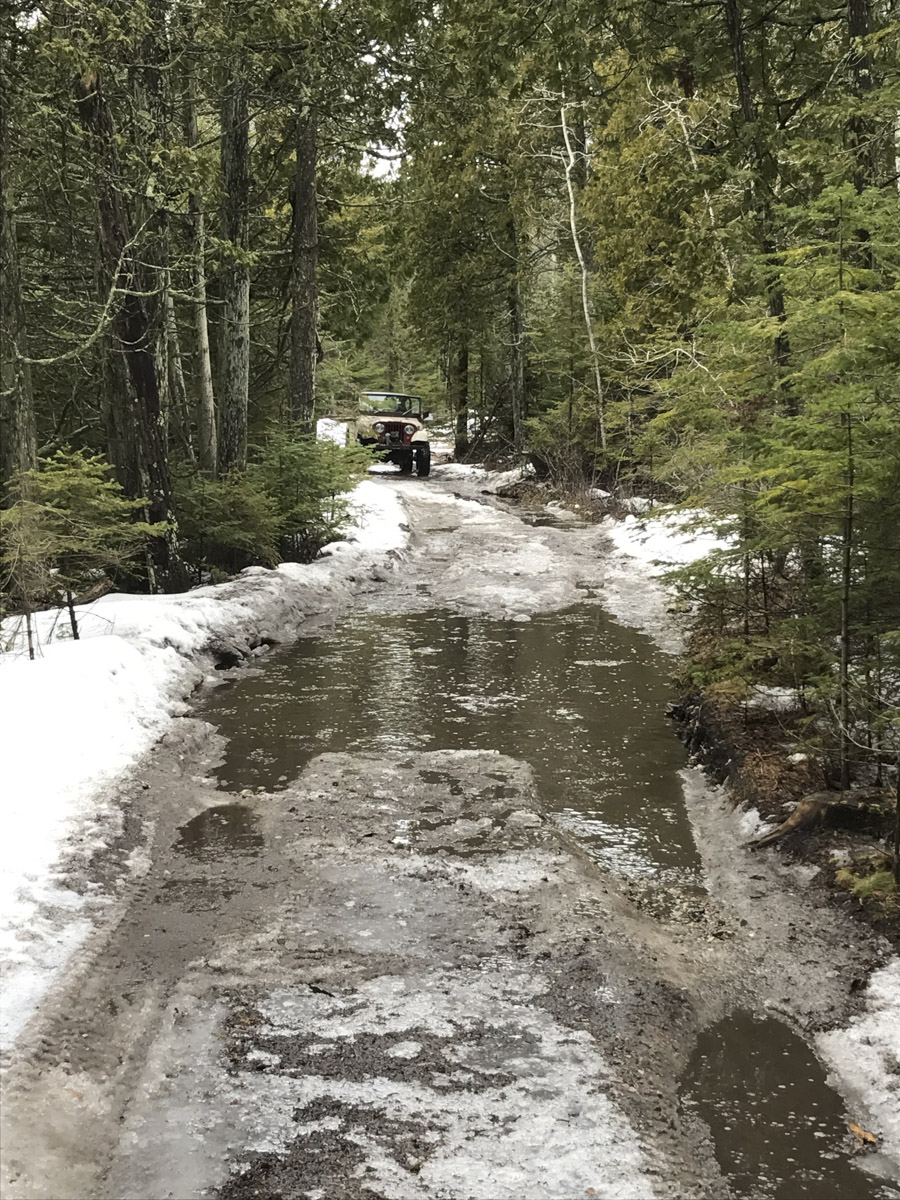