Story and Photos by Angela Greenroy

On a Sunday morning last month, women from the midwest got behind the wheel of their Jeeps, some for the first time. The location was Robbers Cave State Park in Southeast Oklahoma as part of the Jeep Invasion, an organized event to support local fire and law enforcement departments, organized by Lori Spiva Long. 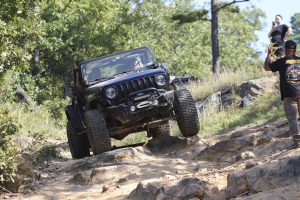 Some of the women were nervous, while others simply took the opportunity to hit the trails again before heading home after a fun-filled weekend. Covid-19 forced the park to cancel the event in April, but Long rescheduled for August, and this year, she planned something a little different. 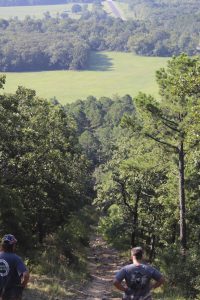 At most Jeep events, very few women are at the wheel. We’re all used to the derogatory remarks about how women can’t drive. It’s an ongoing joke. You are more likely to find men behind the wheel at Jeep events, especially where lots of men are gathered. But this year, a few women approached Long and said they would like to wheel without feeling intimidated and uncomfortable, so Long scheduled an event for women. Men could ride along, but they had to ride shotgun. 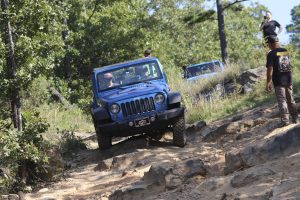 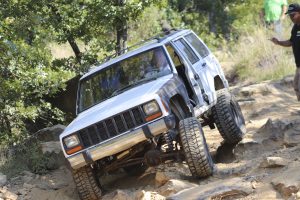 One man in the Robbers Cave Family Jeep Invasion Facebook group commented that women would get sidetracked and would need men to backtrack (there’s always one in the group). This was an event to empower women. (Long’s Jeep is named Sidetrack and those who knew that, knew the comment wasn’t personal.) Men jokes aside, the women showed up Sunday morning of the event to show their stuff. 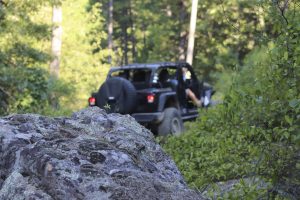 The first half of the trail was slow going, as is the case with any long line of Jeeps. At the top of the big hill, emotions surfaced. Wheeling over a few large rocks seemed like a challenge. Facing down a steep, rocky hill when you’re not feeling overly confident in your driving abilities (and you don’t want a man to come in and save you) can be downright terrifying. Even from the shotgun seat, the big hill takes courage. A few women had to be talked into embarking on what looks like a landslide. Though some of the women had conquered the hill before, it’s different every year, depending on the weather. Trails can often be different from one day to the next. One woman said to another, “I’ve done it before. Even if you don’t do it today, I highly recommend doing it at some point.” Another woman explained the need to disconnect the sway bars. 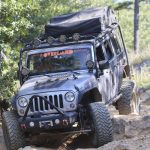 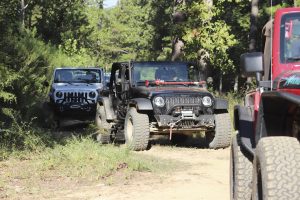 While some stood at the top uncertain if they could conjure up the nerve, Jeeps began to descend one after another. Women, who’d always sat shotgun while their husbands drove, edged off into what would soon be their empowering moment. Men and women spotted the Jeeps offering encouraging words.

The drive down feels longer than it is. Jeeps parked on the side of the trail at the bottom of the hill, and women were standing around excited and incredulous as they looked back up the hill amazed at where they started. Men don’t always make it look easy but being the one in control offers a completely different perspective. 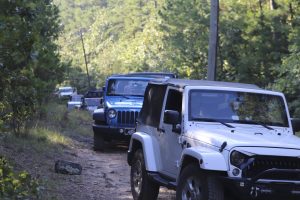 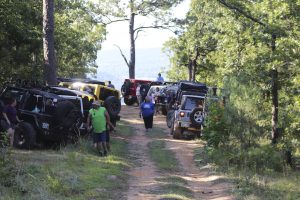 Twenty-two out of twenty-five Jeeps, driven by women, took the hill. Long guided two Jeeps down an alternative trail. One decided not to go down because her Jeep was stock, and she was advised she might not clear the first drop off. The other because of time constraints. 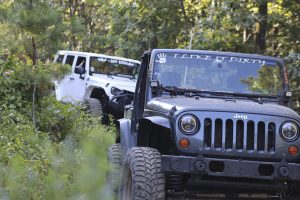 Every year Long organizes this event, and every year Jeepers want to return for the trails, the fun, the camaraderie, the giveaways, and the opportunity to support first responders. Next year will be different. Nearly thirty elated women gathered at the end of the trail that day. More than thirty empowered women will return in a few months, and there are many more trails to discover.

The Robbers Cave Family Jeep Invasion of 2021 will likely see more women taking the wheel and more men sitting shotgun. Until the dates are set, and plans can be finalized, keep flexing those muscles, women. Next year is going to be bigger and better. 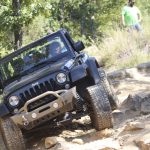 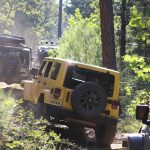