Emil Grimsson has a dream job. Not only is he the founder and director of Arctic Trucks, a company with a worldwide reputation for making amazingly capable 4x4s, he also gets to drive them in some of the most incredible places on Earth. The Magnetic North Pole with Top Gear was one of the most high-profile, but with nearly 185,000 miles in Antarctica under their massive tires, from a grand total of sixty arrivals to the South Pole, Arctic Trucks is the only company in the world with the experience, technology and expertise to undertake the logistics and vehicle preparation for such unbelievably extreme destinations.

Emil has just returned from a similarly extreme expedition; a three-week traversing of the interior glacier of Greenland, a place so unrelentingly inhospitable that it is considered one of the final frontiers of exploration. For 4Low Magazine he tells Robb Pritchard the full story.

It starts with an American group of wanderlust addicted people known as Expedition 7, who spent three years driving a Toyota Land Cruiser 78 Series on every continent in the world. That included a ‘taster drive’ in Antarctica but to do any meaningful driving in the interior it took much more extreme vehicles, which is why they enlisted the help of Arctic Trucks. In the depths of winter 2013 they crossed the frozen continent twice… but what is there that could possibly come after this? In discussion with Emil a few years later they came up with the idea of driving over the vast snow fields and glaciers of Greenland, not just from east to west, but also north to south, a challenge so extreme that it could only be undertaken by one company.

Despite Arctic Trucks being responsible for some of the most incredible achievements ever made in a 4×4, the Greenland exploration was far from routine. A key trait needed for operating successfully in any expedition is flexibility. Strong northern winds blocked the fjords with so much sea ice that the barge they planned to transport the three AT44 Hi-Luxes on (two ‘normal’ Hi-Luxes, one pulling a trailer, and a 6×6) couldn’t sail. A boat had to be found with a specially strengthened bow to break route through the ice for the barge, but still only managed to get them 8 miles away from where they intended. With local help they managed to find a route over land, lakes, rivers and mountains to get to Isortoq, the remote reindeer farm they’d chosen as the expedition start point.

A new tool the team was experimenting with for future ice and snow based expeditions was sledges designed to carry fuel in bladders behind the vehicles, an innovation that offered a significant weight saving over the usual big bowsers with axles. They couldn’t be pulled over the rough, rocky terrain leading to the glacier though so the first task was to drive them to a staging area on the back of the pickups and fill them with over 500 gallons of fuel once they were safely on the smooth ice.

It’s not really a fact that many ‘normal’ off-roaders are aware of but the bottom of the glacier is the hardest part of it to traverse. At the edges it begins to open up with huge car-swallowing crevasses and meltwater cutting fissures deep enough to block the way so the initial going had to be especially careful. Leaving as little to chance as possible, analysis of radar satellite images was used for choosing the route as well as Emil’s accumulated experience of reading the glacier to pick which lines to take. The higher they got up onto the bleak, bitter and wind-swept surface the more the ice smoothed out and driving got easier. Relatively, of course.

Emil explained that sometimes it was a bit like driving on a giant, bright white ocean. Sometimes 4 or 5 psi in the 44 inch tires gave enough floatation over the snow but in places it was much softer and going down to 1.5 psi was needed, which obviously makes the engine have to work harder and use more fuel.

Sastrugi are the worst terrain to encounter on a glacier. Anyone familiar with desert driving knows that the sand can blow up into little ridges that can make the going very slow, the exact same thing happens with snow in very cold regions. The sledges pulled well across the soft snow but in the first 25 mile long section of sastrugi the straps weren’t well suited to holding the heavy bladders in place and they had to stop frustratingly often to re-secure the loads.

The next day they stopped to explore an old radar station called Dye2, a relic of the Cold War to listen for any incoming Russian missiles. It was one of a line of sixty that stretched all the way across Canada to Iceland but is now being slowly reclaimed by the elements. With broken windows letting the snow swirl in, from the inside as much as from outside, and is an eerie reminder of the military past.

After camping some 120 miles east of Kangerlussuaqat, the team decided to press on as much as they could and taking shifts at the wheel managed to do the next 440 miles in just twenty hours, crossing all the way over to the eastern side of the glacier. But tired and well ready for a rest, the sense of satisfaction of having made it so far only lasted until they realised the fuel supply that was supposed to be waiting for them was nowhere to be seen. After some phone calls they discovered that there had been a communication error and it was actually 60 miles north. It was a long 60 miles with big sastrugi laying at 90 degree angles to where they were heading and for that particular area they didn’t have any satellite analysis. A few hours later they found it and gratefully made another camp.

As they continued heading north along the east side of the glacier towards the location of the second fuel drop the sastrugi got worse and the jagged ice ridges began to cause serious problems with the sledges. The main issue was with the metal runners underneath breaking, which caused the screws holding everything together to come loose. After stopping more and more frequently to make small repairs they decided it would be better to stop and make some modifications to the whole set up. They took off all the rudders which meant that the sledges would flex better over the ridges, obviously a big advantage, but they could also fishtail uncontrollably if the vehicle turned at speed.

Making their way higher up on the glacier, which in the centre of the country is a colossal 2 miles thick, the sastruga got smaller, until eventually, relying on the GPS compass bearing, they began making such good time that it was possible to think about catching up with the original schedule, but not if the weather had anything to do with it. Emil casually stated that they were in ‘a bit of a white out’. With the wind-whipped snow blurring out the distinction between the ground and the sky it was impossible to see what was in front. After a day of this the wind got so strong that going outside to do any repairs on the sledges was nearly impossible so they decided to take a short but needed rest. No one was going to put tents up though. As well as being a raging storm the outside temperature was -31°.

Constantly looking for ways to innovate and improve, Arctic Trucks developed a set of tires in conjunction with Nokian to be more capable in the snow and have better fuel economy. In Antarctica fuel is both extremely expensive and hard to get and despite having a capacity of over 500 gallons of fuel per vehicle, this can still be a limiting factor so anything to help with economy and range is vital. Emil was really happy to discover that the performance of the new tire used up to 30% less fuel.

Wulff Land looming up ahead. So far north were the team now that even in April the sun didn’t set over the horizon they wondered if any non-amphibious car had ever driven so far north before. They needed to be careful though, as the edge the glacier was covered in blue ice sloping forwards which made it hard to see in time if they were approaching a sheer cliff. Knowing what they needed, they found a small chain of rocky hills that cut into the edge of the glacier and found a way down into the barren moon-like landscape below.

Heading back south the team visited the remote scientific station at Summit Camp, the first people to ever drive there, and just after there was a spectacular display in the sky as the sun’s light interacted with tiny ice particles in the air to make stunning rainbows and spectacular circles.

With things going really well and with just the last few kilometres to go talk was about pizzas, hotel rooms and showers, but almost in sight of the town progress off the glacier was halted by impenetrable ice ridges, melt channels and crevasses hidden by recent heavy snowfall. The flat light made it hard to see any contrasts, so they waited until it got a bit darker and tried to use the spotlights to pick out a path. But when a snow bridge broke damaging both a car and the trailer as the crevasse opened they knew that they wouldn’t be getting to a hotel that night.

The next day Emil headed out to scout a route through, climbing on boulders that bigger than cars, and found some skier’s tracks that led through a way of smoother ice ridges. They followed this and by midday, after often needing to winch the Hi-Lux with the trailer, managed to thread their way down. Covered in a full complement of travel grime they took over a bemused restaurant for the first fresh food in weeks.

It was only 100 miles along the well-known Arctic Circle Trail to the end point in the coastal settlement of Sisimiut but it would be the nicest, yet most challenging of the whole expedition. The trail is a historical route for dog sleds in the winter and an extreme hiking route during summer and turned into a mini-expedition in itself with the beautiful scenery of mountains, rivers and fjords counter-acting the effects of fatigue. They made it to Sisimiut the next morning and after three weeks and 3600 miles of driving some of the world’s harshest terrain, breakfast in a hotel was treated as an absolute delicacy. 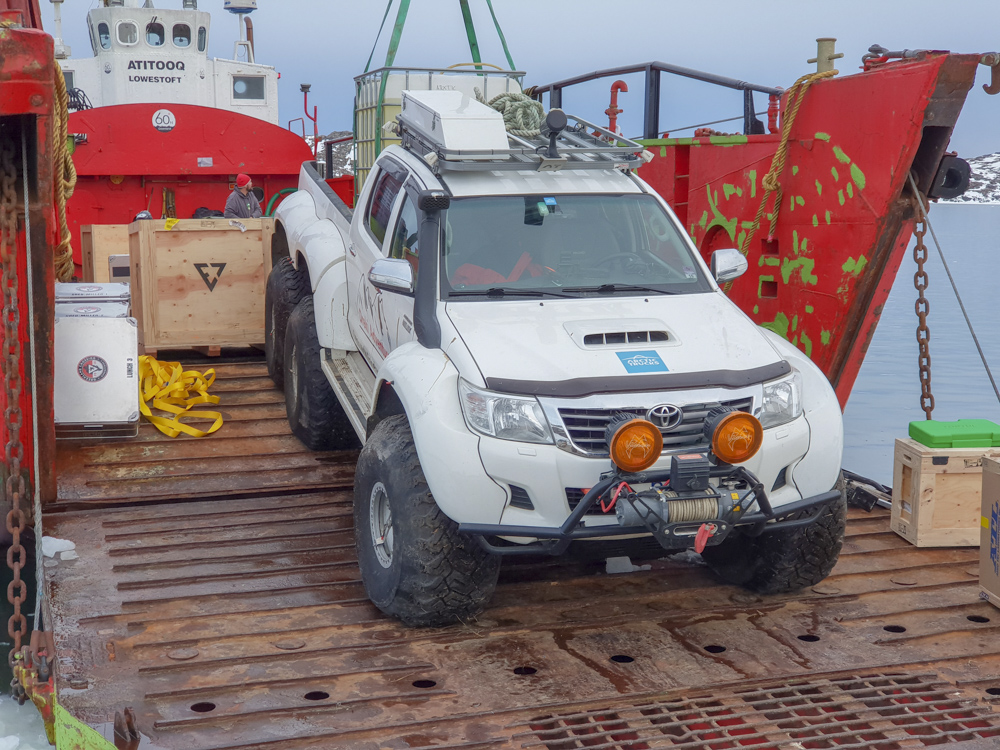 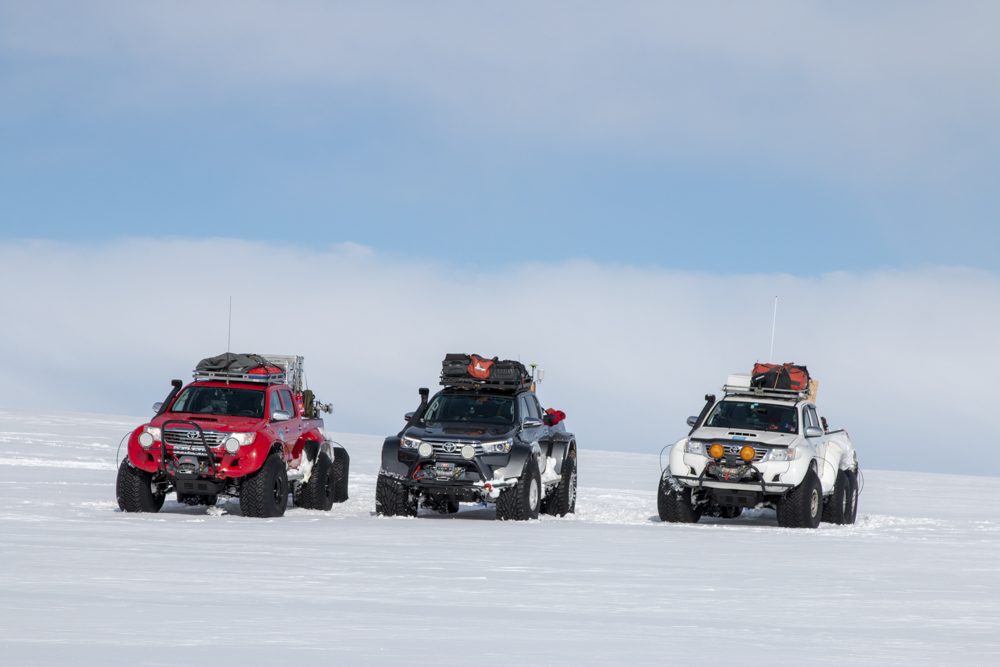 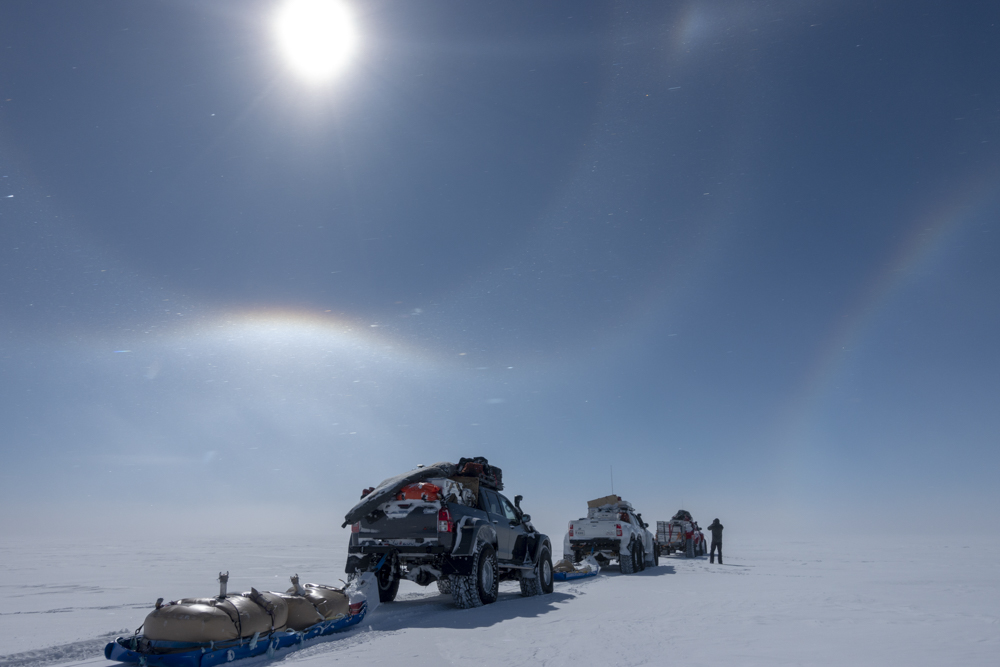 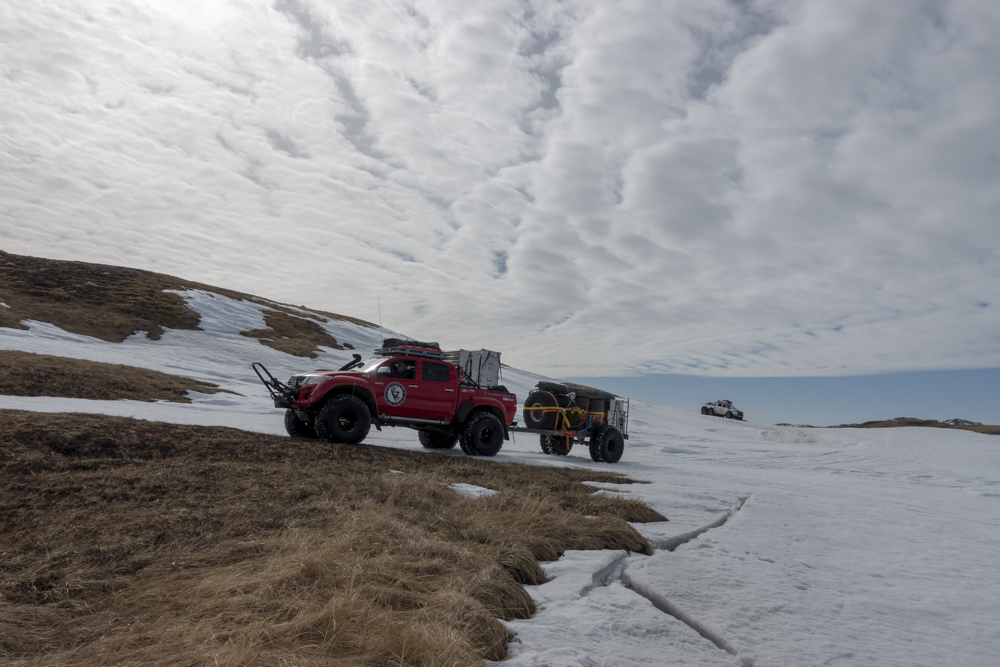 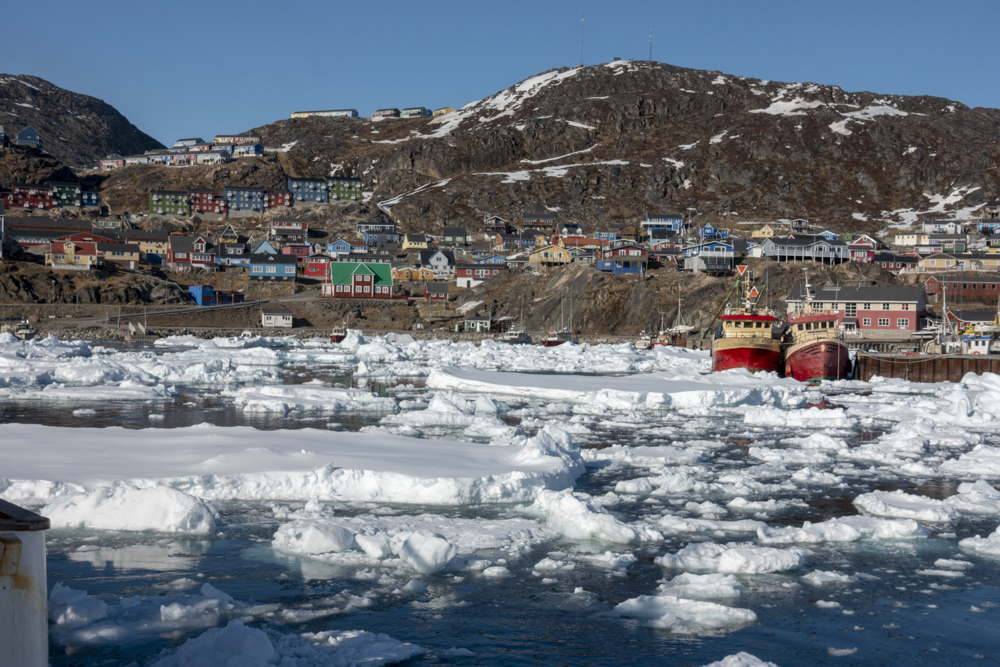 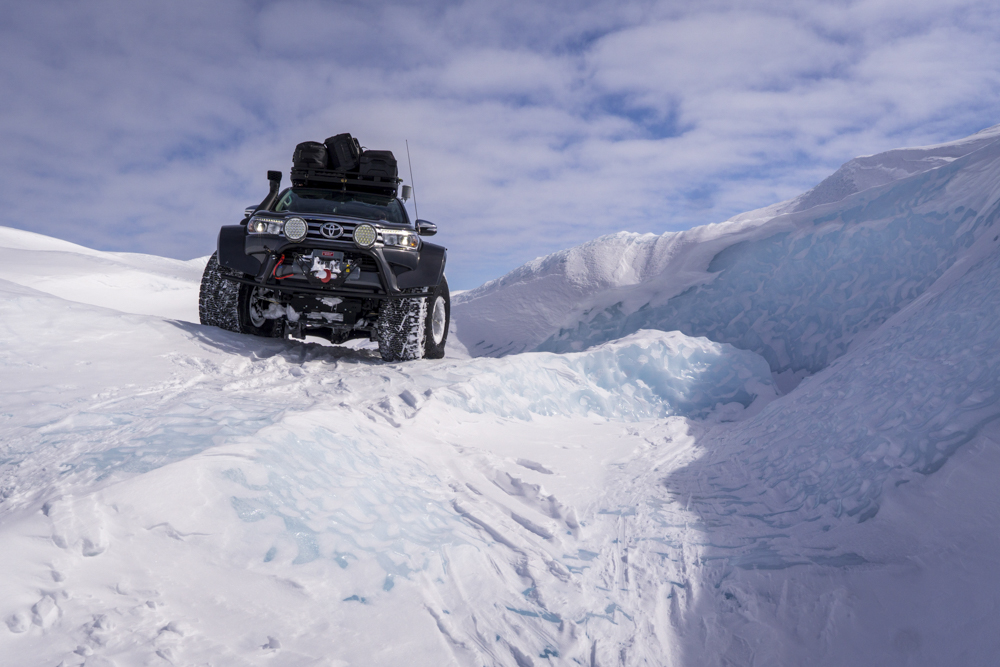 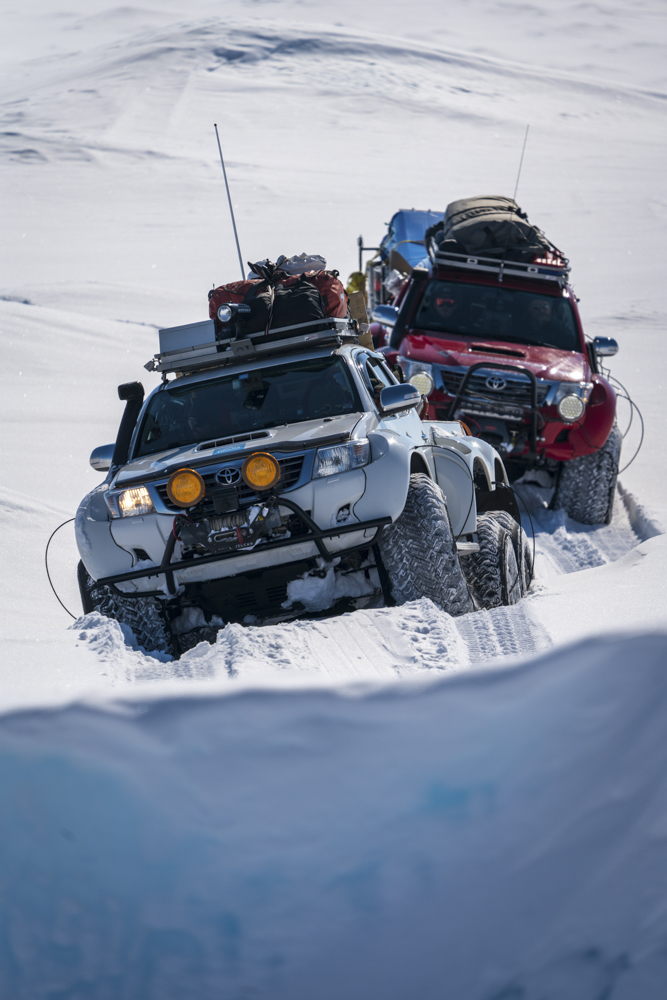 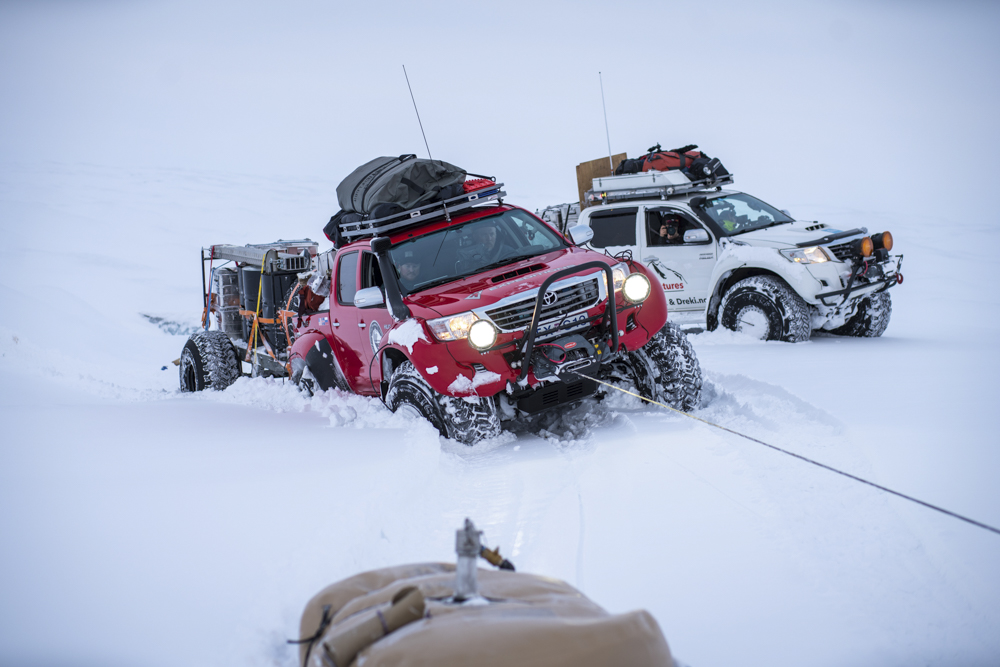 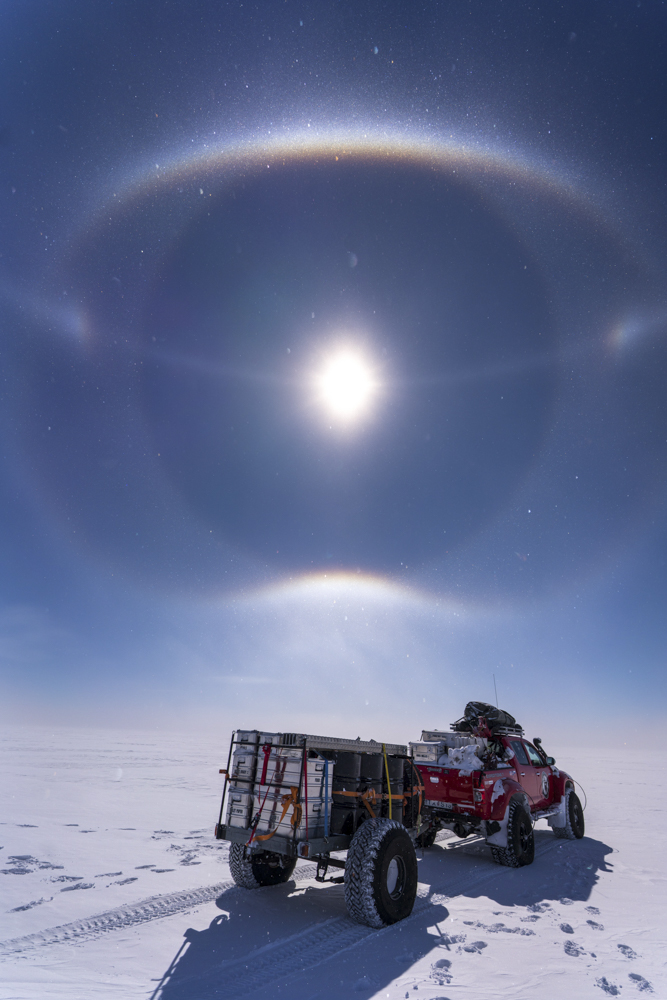 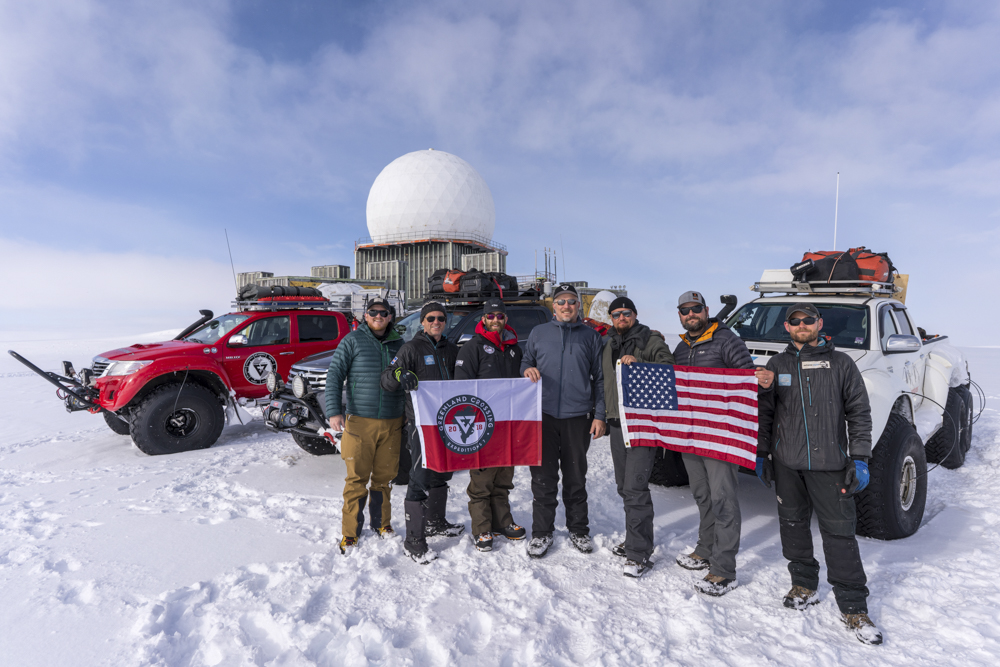