Many vehicles are equipped with internal slave cylinders. Auto manufacturers often use internal slave cylinders because they have fewer parts. Fewer parts mean less cost and faster production, which translates into higher profits for them. If you have ever experienced hydraulic failure on a vehicle, it is not a fun situation. Sometimes it is gradual, and other times completely sudden. But most of the time, the clutch will not fully disengage, or it will feel funny for some time; then, all at once (or gradually) not disengage at all. When this happens, it renders your vehicle unsafe to drive.

We picked up this YJ for a very reasonable price. It was so reasonably priced that we wondered what was wrong with it. The seller told us he wasn’t aware of any mechanical issues with the Jeep. But, I noticed a bottle of brake fluid lying inside the driver’s door, and when I asked him about it, he said, “the clutch master loses fluid once in a while.” I didn’t think much of it and began driving the Jeep, but within three days, the clutch pedal was on the floor. I tried filling the clutch master cylinder and bleeding it, with no luck. There was quite a bit of brake fluid coming out of the sheet metal cover on the bell housing…great! 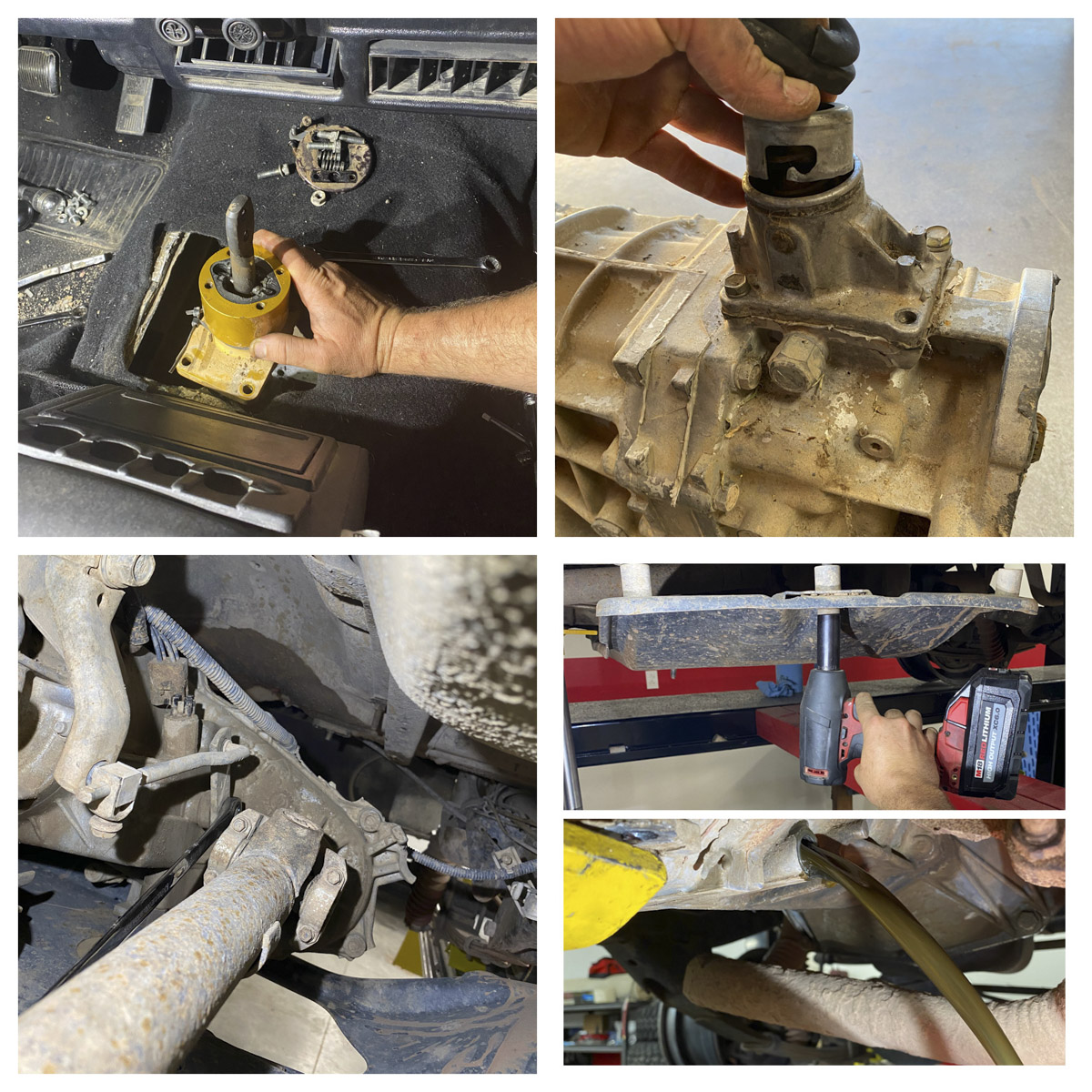 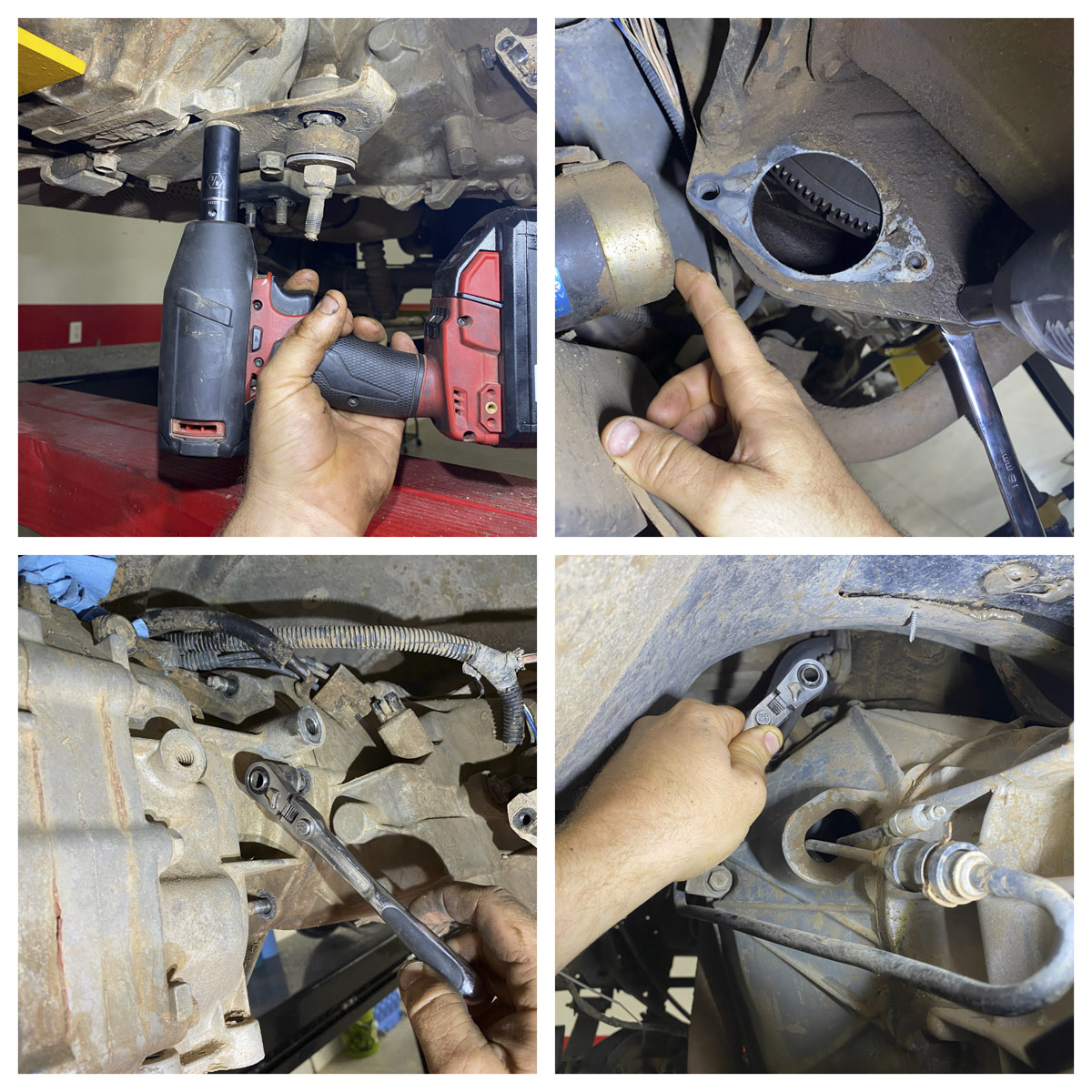 After the hydraulic line was unhooked, with the transmission supported, it was ready to be unbolted and removed. The top two bolts on our application were inverted Torx bolts. The bolts were removed, and the transmission was slid back. We were going to try removing the transmission without dropping the exhaust, but that didn’t work out too well. So, we ended up having to drop it down. Next, the slave cylinder was removed, and as you can see, it had been leaking for some time. Finally, the bell housing, original bearing retainer, clutch, dust shield, and pilot bearing were removed. We used a special puller to remove the pilot bearing. There are other ways to remove this, or similar tools may be rented at local part stores. Next, all the mating surfaces were cleaned. 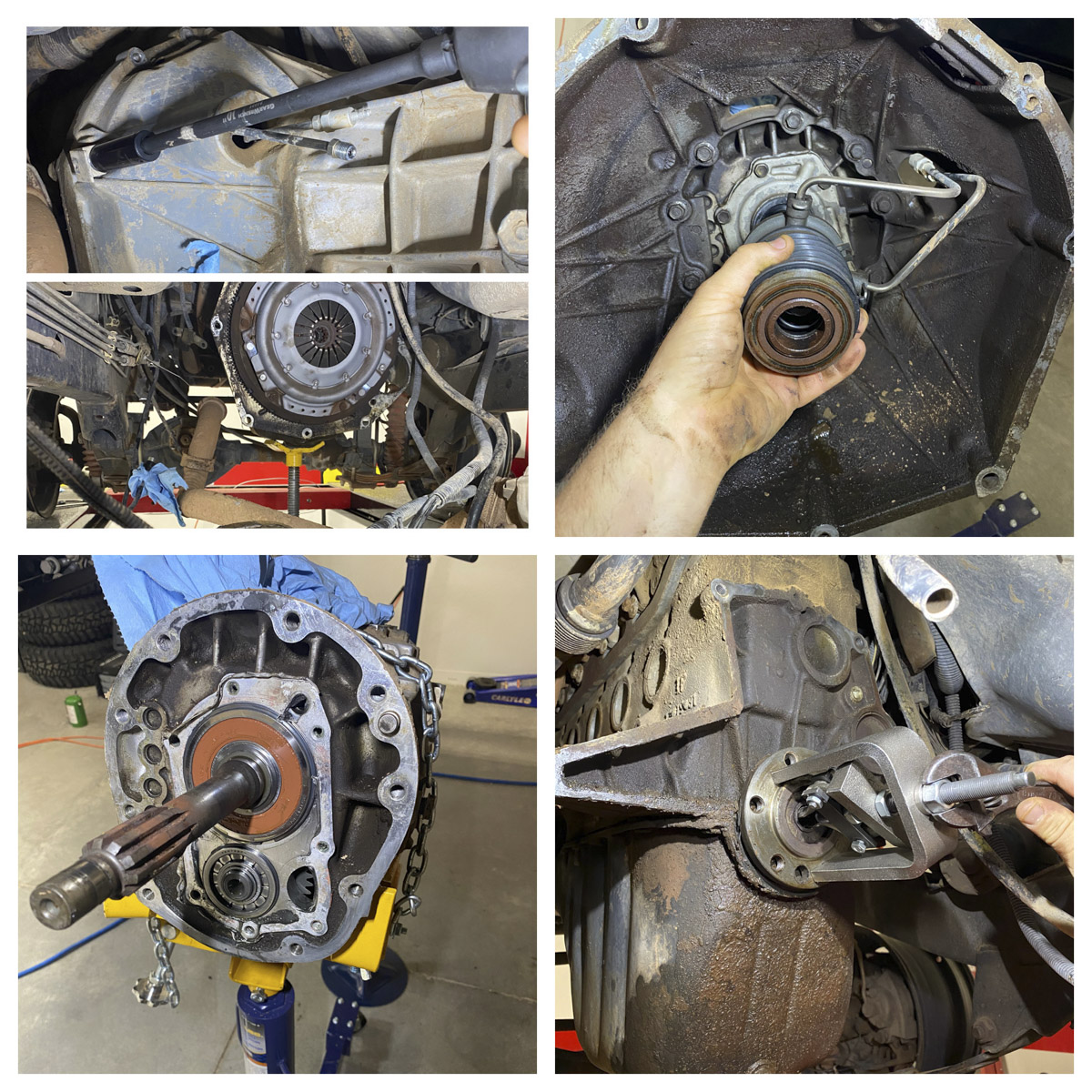 To start the reassembly, a new bearing retainer and bell housing were installed. Then the ball stud, clutch release arm, and throw-out bearing were installed. Due to year variations, we had to get a different pilot bearing than what came in the clutch kit, and, of course, with the new bearing, the pilot tool didn’t work. Finally, the clutch disk and pressure plate were installed. It is important to get the clutch disk in the right orientation, as the raised spring side goes towards the pressure plate. We taped the top of the shifter hole to keep out dirt. 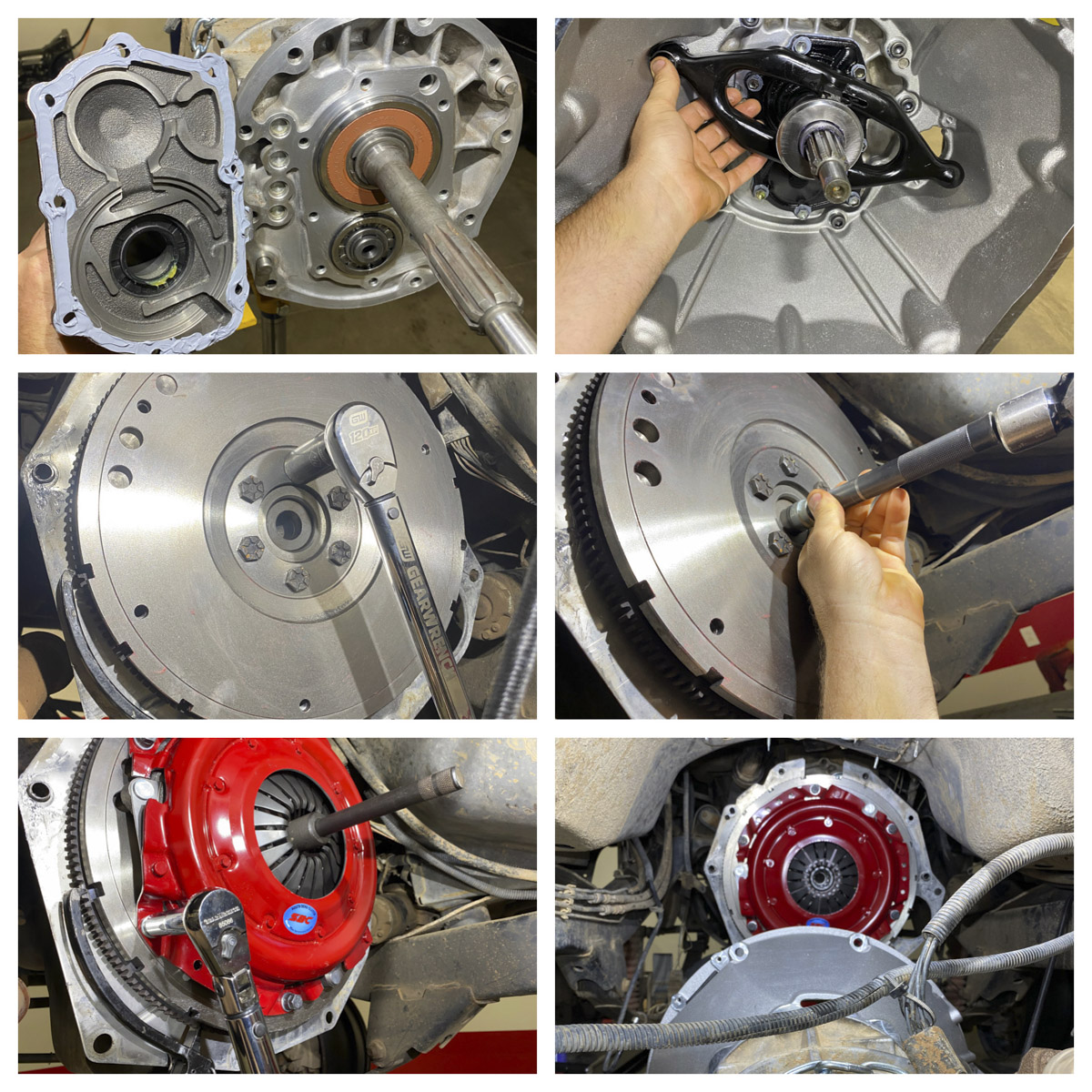 The basic reassembly of the transmission/transfer case was then performed in reverse order from how it was removed. We made sure to refill the transmission and transfer case with the correct oil. You don’t have to drain and refill the transfer case, but we did it for maintenance reasons. There was a lowering kit on the skid plate that we removed. The vehicle is equipped with a slip yoke eliminator, which is not needed with the amount of lift on this vehicle. 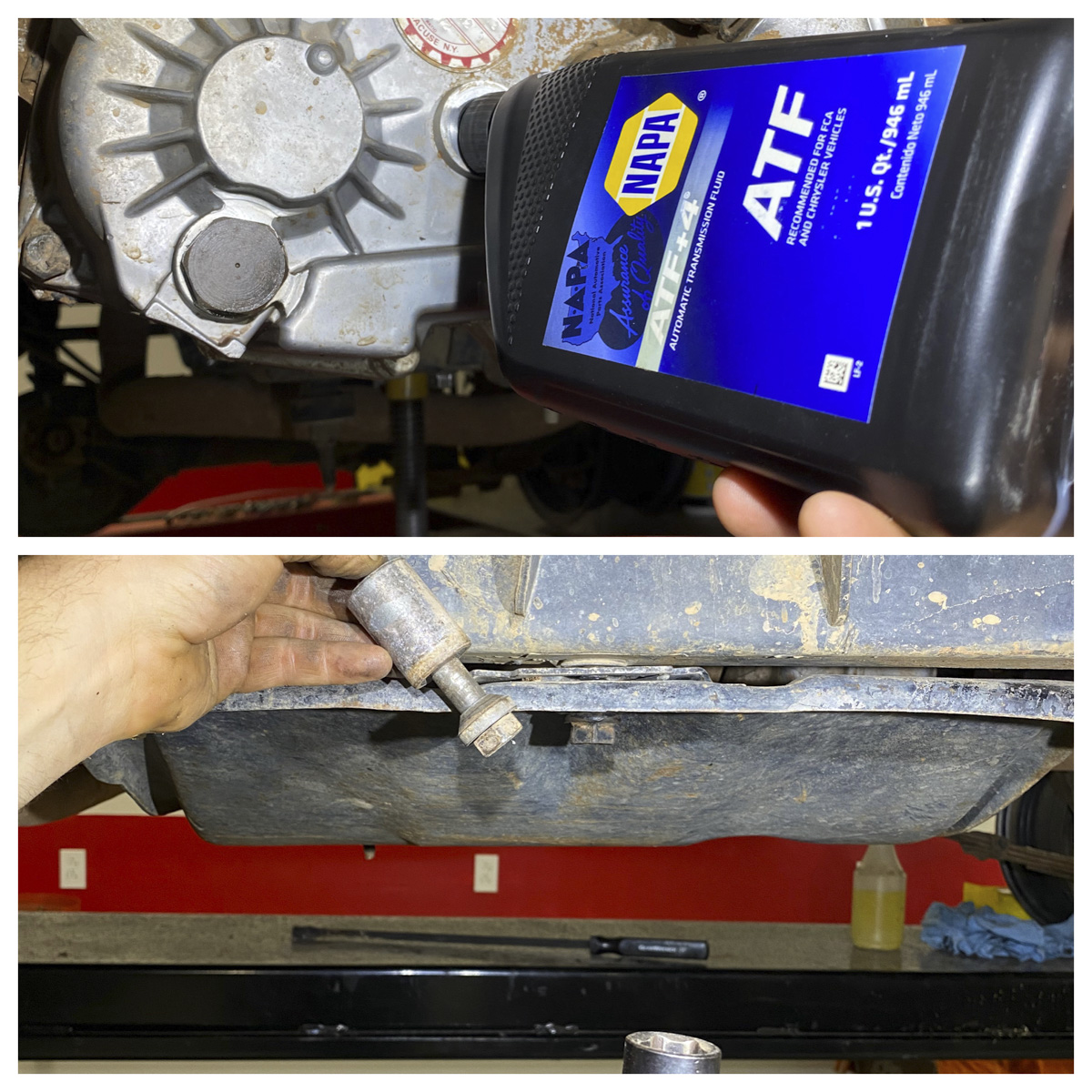 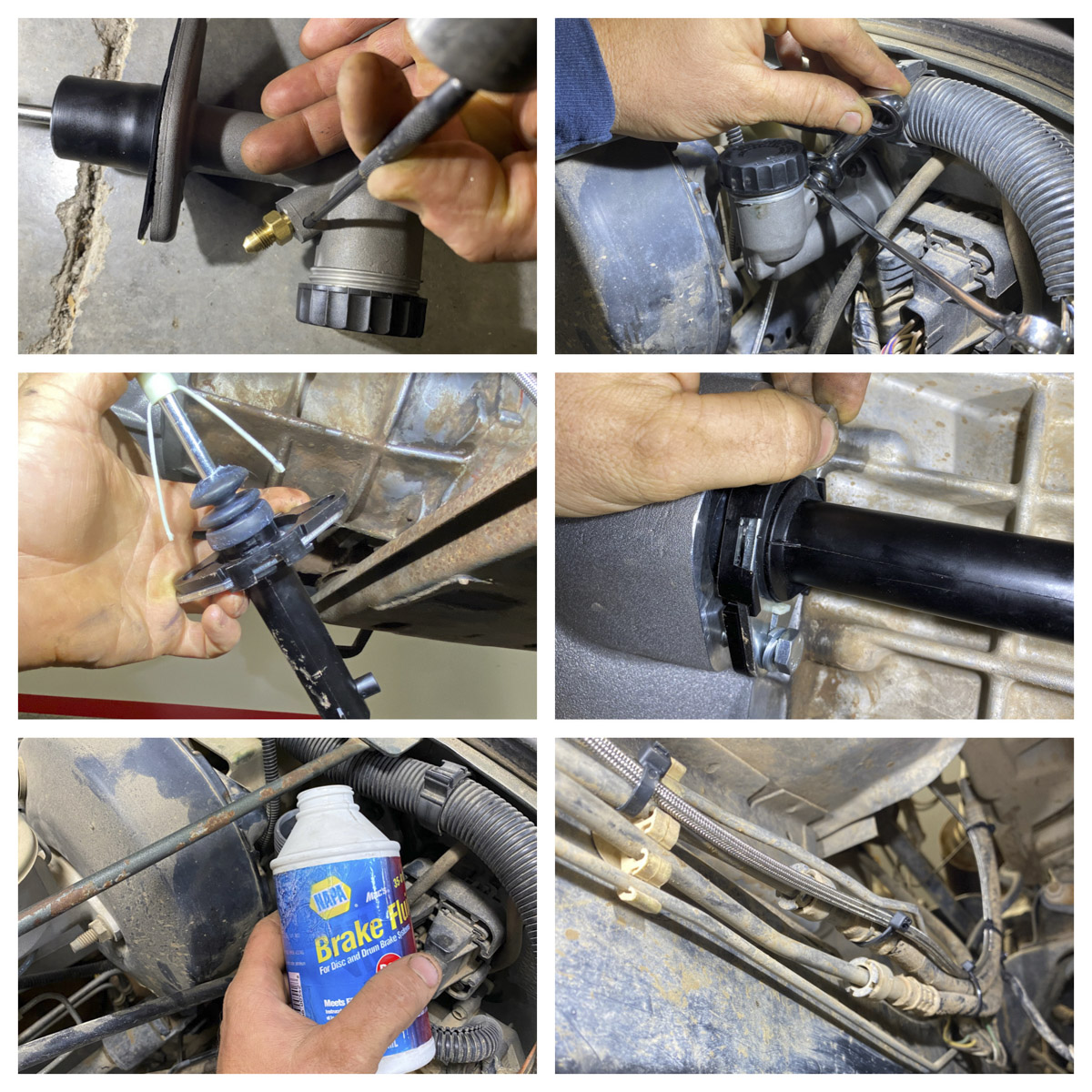