Story and Photos by Don McNeilly

If you haven’t had the opportunity to attend the Discount Tire Rally on the Rocks you’re missing out on one of the best run UTV rally’s in the most scenic place in the country.  I have been extremely lucky to have attended this rally for many years and every year I’m amazed at how much fun I have for the entire week.  I have gotten to know so many of the guides and vendors as well as made some good friends that I stay in touch with.  I can’t recommend this event enough to anyone that enjoys driving side by sides.

I started riding in Moab in 2003.  Myself and three other experienced quad riders did 9 of the top 10 hardest Jeep trails on quads in three days of riding.  When I first came in a UTV I was amazed at the difference.  The sides by sides are so much more capable and comfortable and as an added bonus, you can take friends along to share the experiences.

The unbelievable views on all the trails in Moab with the beautiful snow-capped LaSal Mountains looming in the background while riding on gorgeous slick rock is hard to beat.  Many people, when they think of riding in Moab get nervous because of some of the online videos they may have seen of people not taking the best line on a difficult obstacle.  One of the great things about going to this Rally is the trail guides are very knowledgeable when it comes to the trails and they will help anyone that needs assistance.  Most of the harder trails have a bypass around difficult spots should you choose to as well.

We arrived at the Rally this year after a nine hour drive from Phoenix.  After settling in and getting a good meal we turned in for a good night’s sleep before the first ride the next day.

Our first trail ride was on Fins-N-Things.  Getting to the trail head our group was escorted by the local Moab Police department from the arena, along the highway, through town past Hell’s Revenge where they let us continue on our own to the trail head.

The guide took us to the 2nd part of the trail first which was a bit different but it’s always fun to ride a trail from a different perspective.

This trail, I was riding with a friend in his Polaris General 4 1000 set up with some new 30x10R-15 Milestar Patagonia SXT tires and Raceline Trophy wheels.  I have to say they looked impressive.

As we hit the trail the first part was sandy mixed with some very rocky terrain.  We were all having a blast following along the many high banked sharp turns. Eric was having fun hitting all the rocks along to trail to test out his new tires.  At this point I was glad it was not my side by side.

After a short ride we were on the one of the best part of Fins-N-Things where it was like being on a roller coaster, or a dinosaur’s back with the steep climbs and decent.    It was so picturesque watching a line of side by sides off in the distance climbing along the slick-rock with the snow-capped mountains in the distance.

We had one rider on this trail that broke 2 axles on one of the climbs and another rider that broke the rear sway bar bracket in half.  Even though this is not a particularity tough trail there are many good places to test the limits of your machine and tires/wheels if you are so inclined.

After our ride and getting cleaned up we made our way over to the arena for the Discount Tire ice cream social and their own raffle. What a blast to be able to relax, have some ice cream and be able to put in raffle tickets for only the items you wanted to have a chance to win.  I have to say the Discount Tire Team did a great job of keeping the audience on their toes by throwing out free items to the crowd. What a great end to the day with so many people winning some awesome goodies including tires and wheels.

Next we lined up at the Spanish Trails Arena for the Moab Rim Trail.  We get a Police escort through Moab along the Colorado River to the trail head. After a brief Trail Guide meeting from Gavin, our guide, who had rescued me at Sand Hollow State Park a couple of years ago when my machine broke down, we all headed for our side by sides eager to get the ride underway.  Moab Rim Trail kind of plays games with your head as you make a steep climb along a narrow steep drop down to the road. As the rides line up one by one to attempt Devil’s Crack, they all make it with the help of the guides.

Right after the Crack is another Z-turn obstacle.  It’s called that because most people have to climb it in a Z type pattern, there were a few that took the harder line, which I prefer, going straight up the rock face.

I love watching all the different machines to see how well the drivers pick the lines.  It’s amazing to see all the tricked out UTV’s these days.  They have come a long way in the last 5 years.

There are a few other obstacles but nothing too hard as we continue climbing the slick-rock before making our way to the lunch spot at the edge of the cliff overlooking the town of Moab. The views were incredible with the town below and the mountains in the background.

On the way back we went through a small sand dune making our way back doing a loop.  The group seemed to be on a mission on the way back keeping the pack moving at a good pace.  This trail is an in and out trail so you have to descend back down through the same rock climbs as on the way in.  Our group did a great job and everyone had a blast.

Our 3rd trail was on a mild trail called Porcupine Rim.  This trail has a different look as it has trees along the trail.  It is like all trails in Moab, rocky and has some ledges but it is not as technical as other trails.  Along the way Eric was climbing a big ledge when there was a big bang.  As we looked over his machine he found the front drive shaft broken. He was able to take out the drive shaft and continue on in 2 wheel drive.

Our lunch spot was at the edge of a 1500 foot drop into the canyon with a spectacular view of Picture Rock down in the valley below.  I daydream a western movie is being filmed below. As we stopped for lunch there were many bike riders that came through our group as this is a very popular trail for mountain bikes.

Our way out was slow going, some of the ledges can be precarious depending on your machine. This is one of the shorter trails at the event so if you want to take a break and get back early this may be a good ride to choose, plus they scenery is outstanding.

After cleaning up we headed off to the arena where everyone was served a BBQ dinner courtesy of the owners of the Rally on the Rocks.  With everyone getting their fill of as much as they wanted it was time for the Grand Raffle.  There was standing room only as the crowd excitedly filled the seats hoping to win one of the many thousands of dollars worth of raffle items.  Shane did an great  job moving the raffle along in a rapid pace before food coma settled in. The next day would be the final run for this year’s Rally on the Rocks.

Our last day’s ride was scheduled for Hells Revenge which is one of the trademark trails for Moab. Since Eric broke his front drive shaft the day before, we had some doubts about going on this trail with just 2 wheel drive. We had a few other friends offer to go with us and help out if needed.  That’s all I needed to hear and ran for his side by side to get ready.  Hells Revenge is one of my favorites for the sheer beauty.  It is similar to Fins-N-Things but on a grander scale.

Going as a small group we were able to move through the trail at a good pace, even in 2WD and take a few stops along the way to breathe in all the beauty Moab had to give us on this gorgeous, cool, sunny day.

We had the time of our lives at the 2019 Discount Tire Rally on the Rocks and hope you were able to attend as well.  If not make sure you make plans for 2020 ahead of time before it sells out.

Remember to always ride with a great attitude, watch out for all fellow off-roaders, no matter if they are on horseback, foot or machine, stay on the trail, and pack out what you pack in. 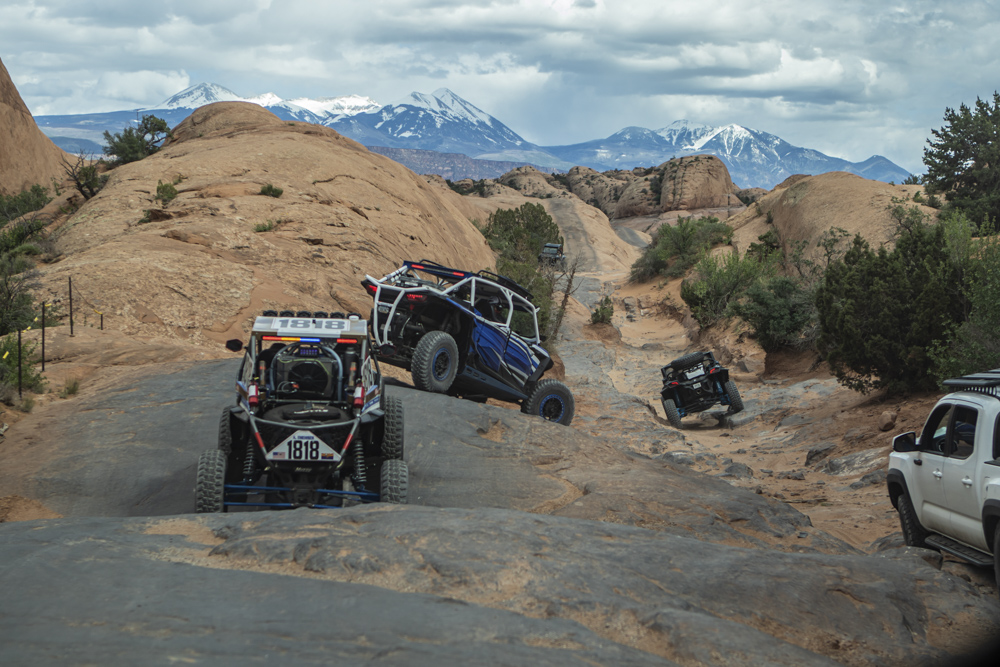 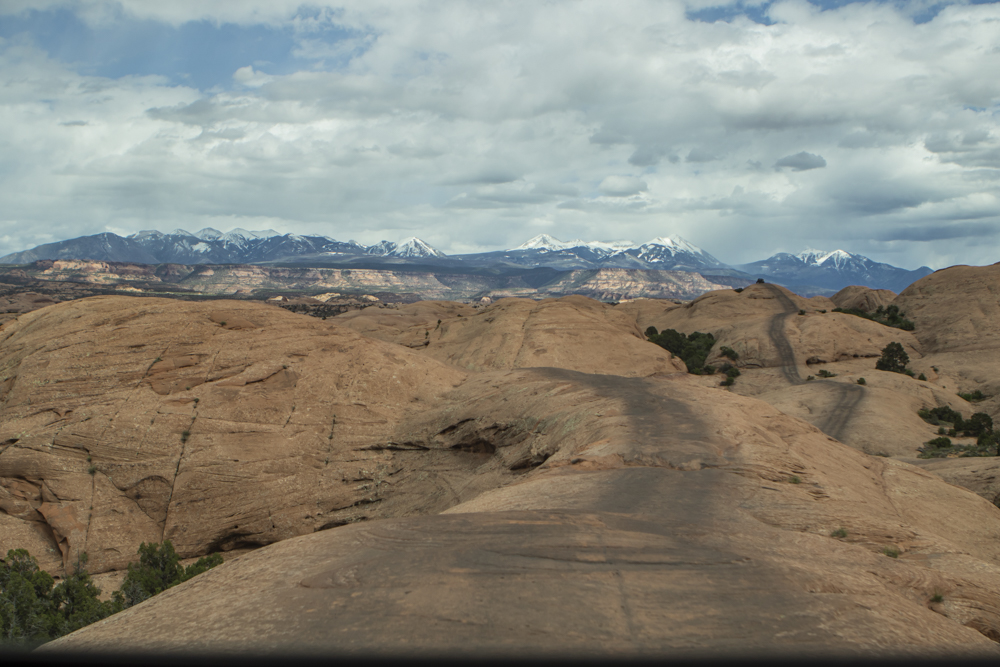 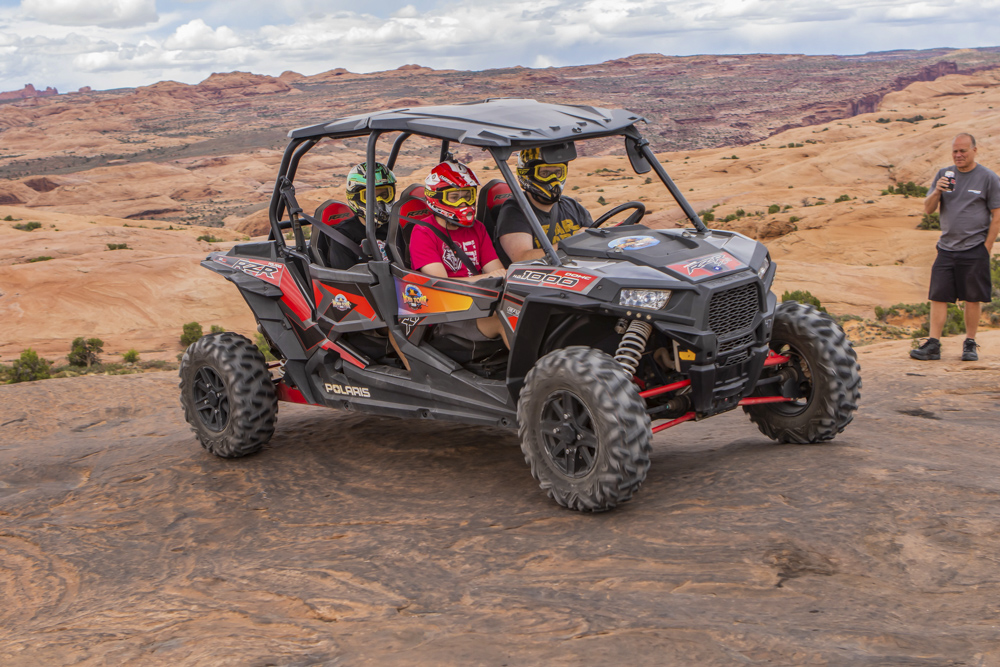 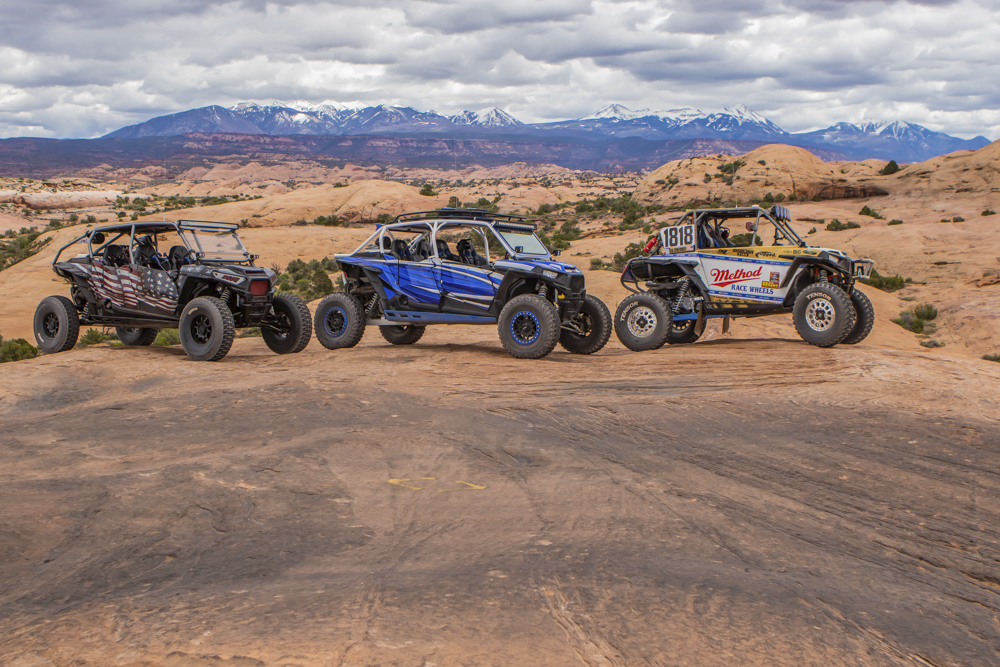 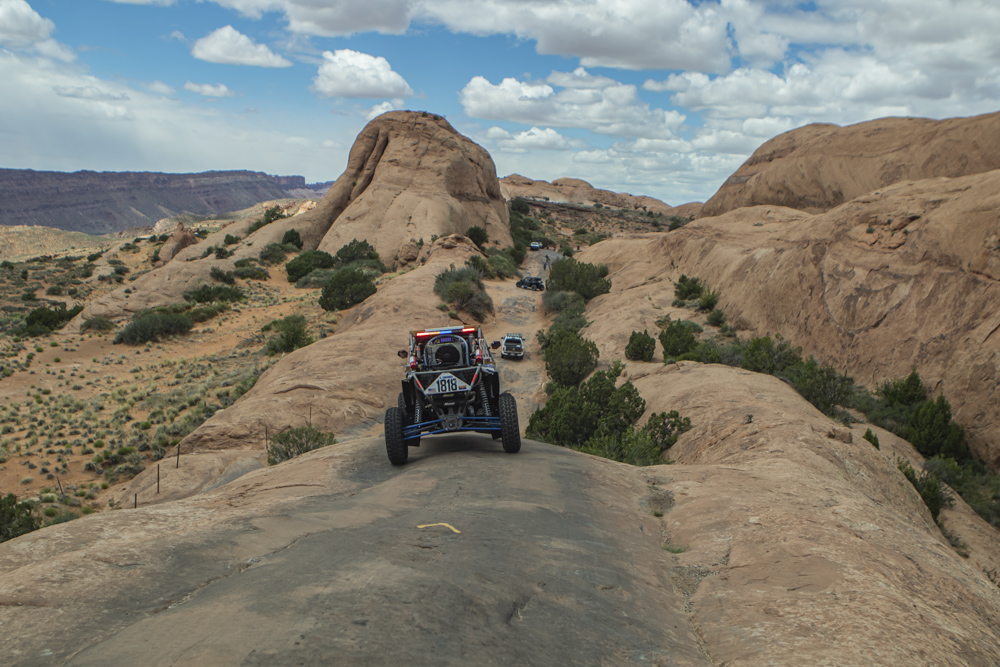 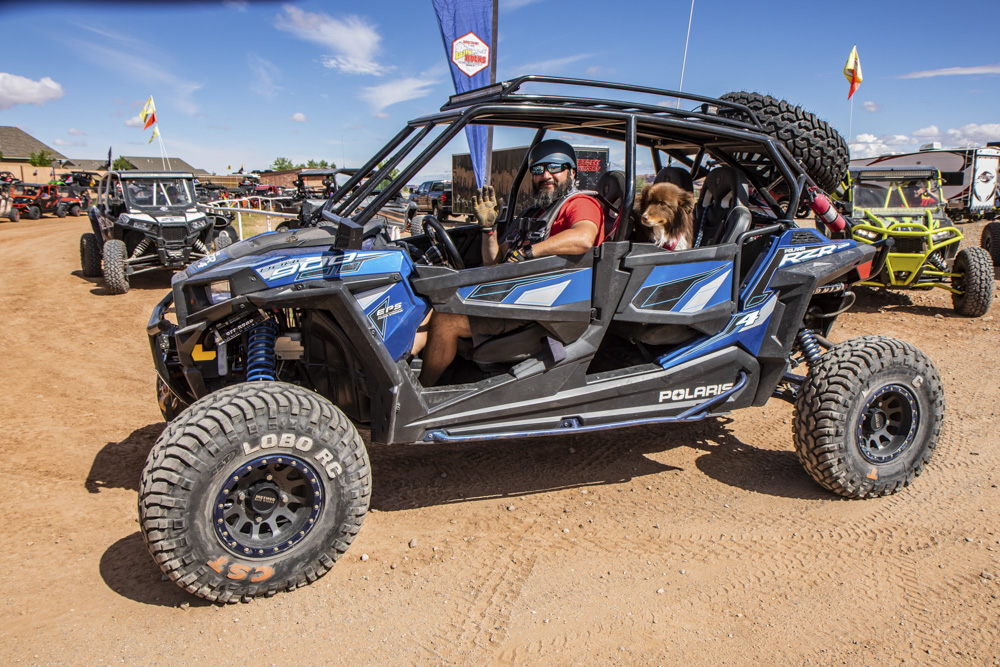 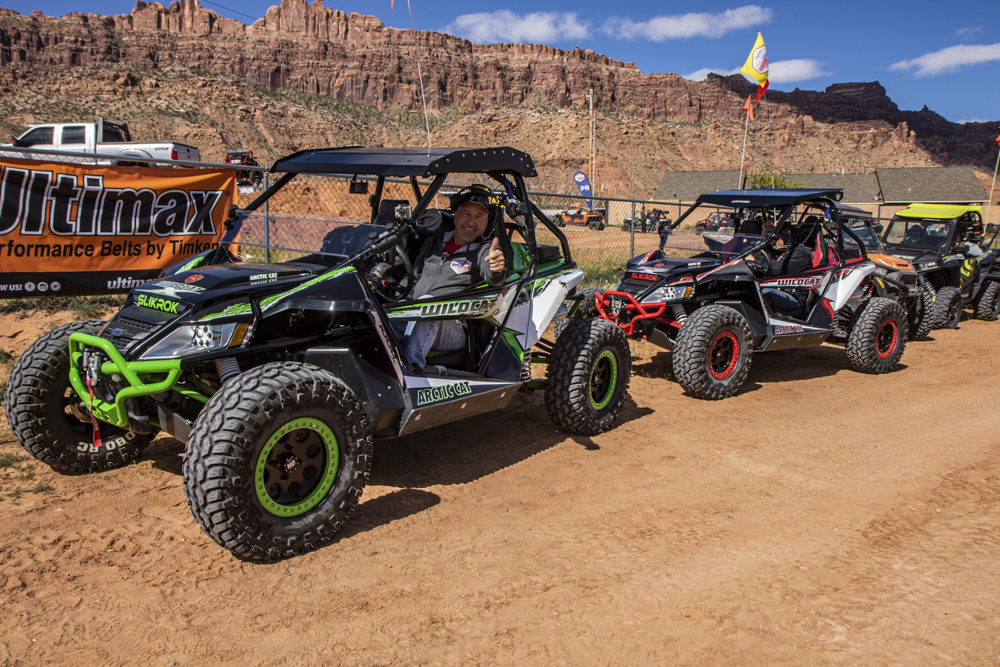 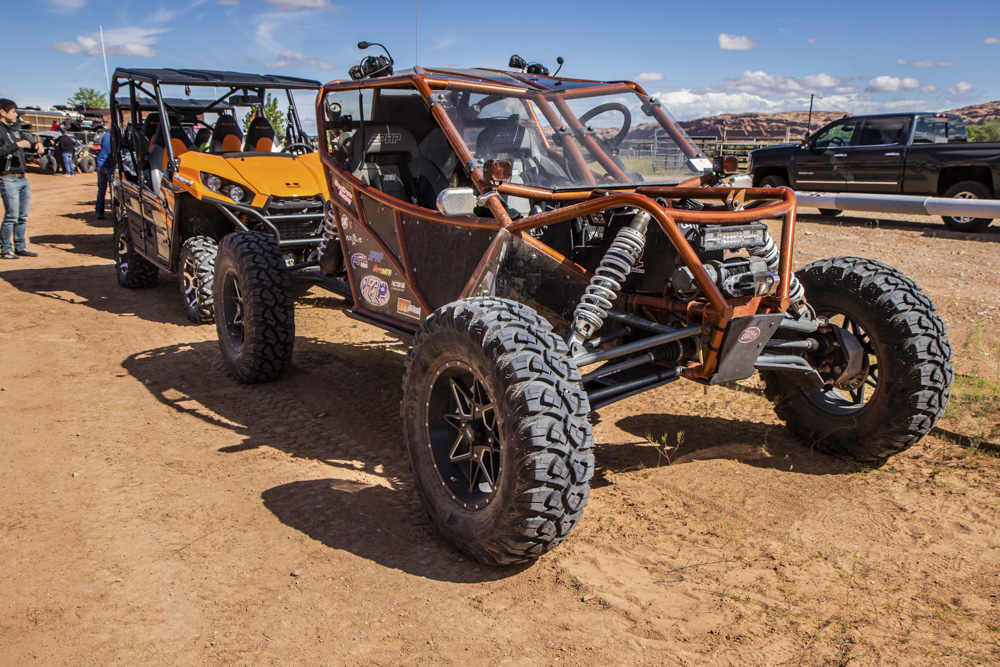 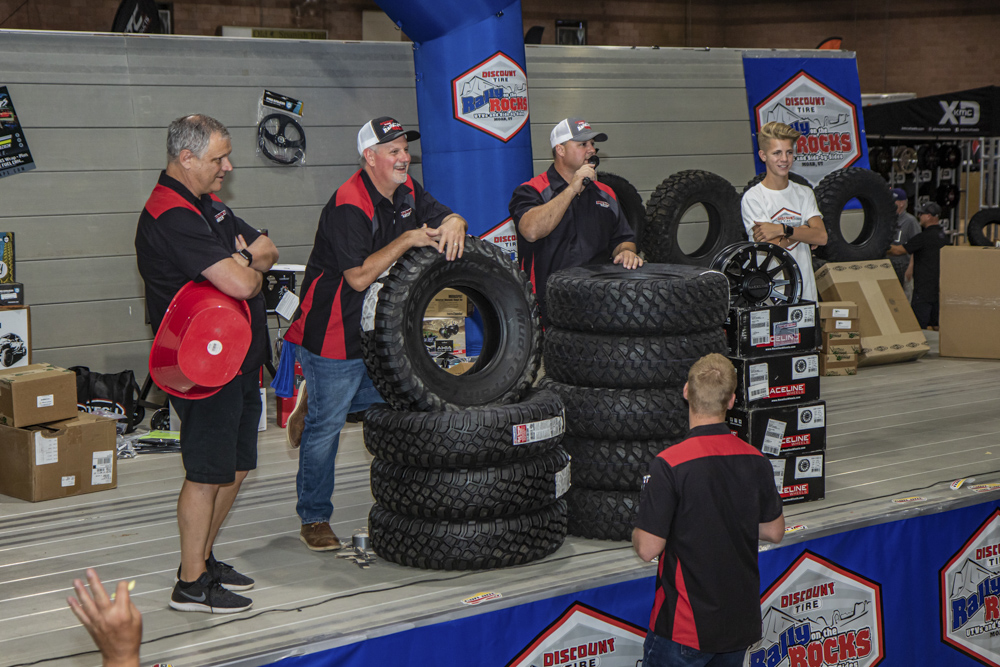 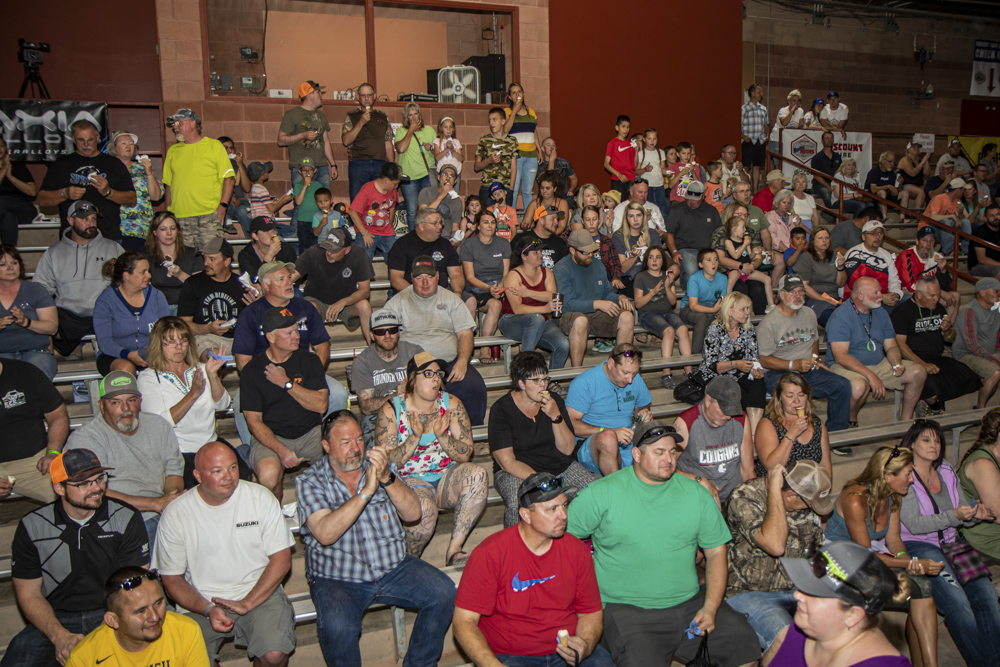 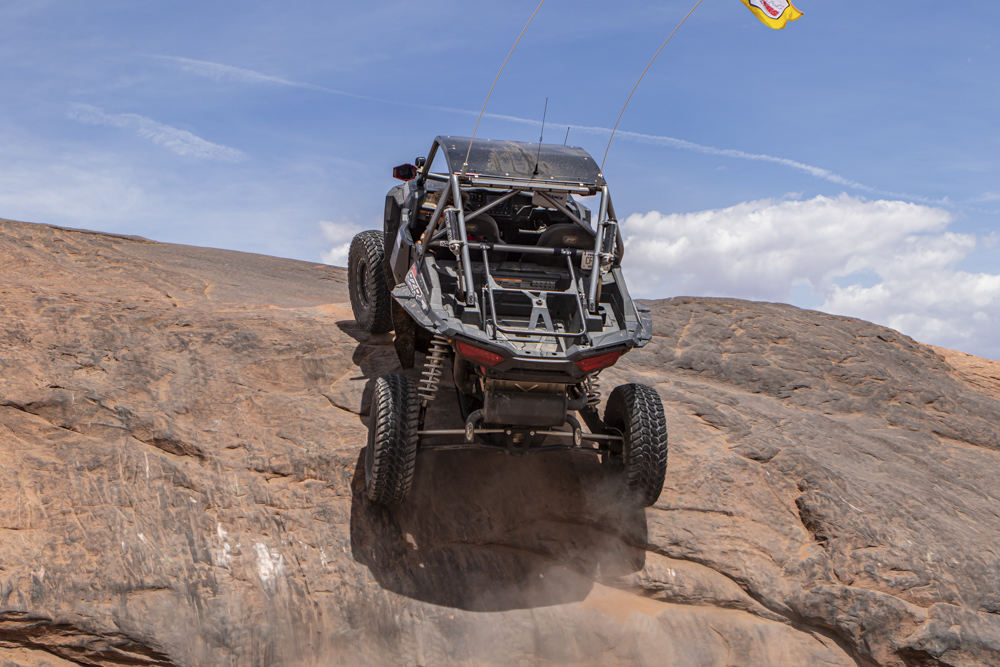 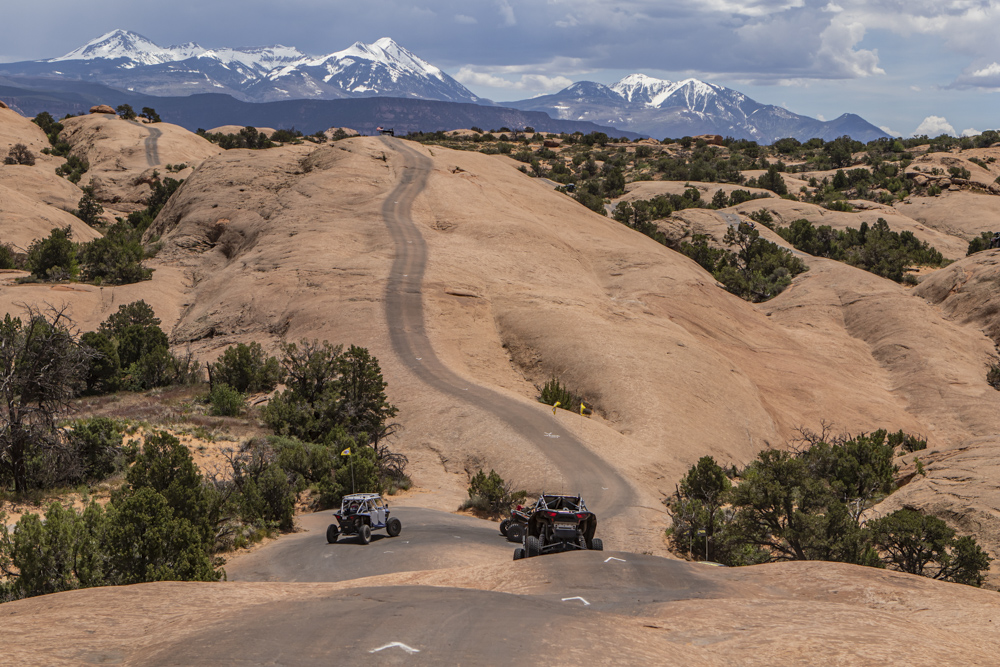 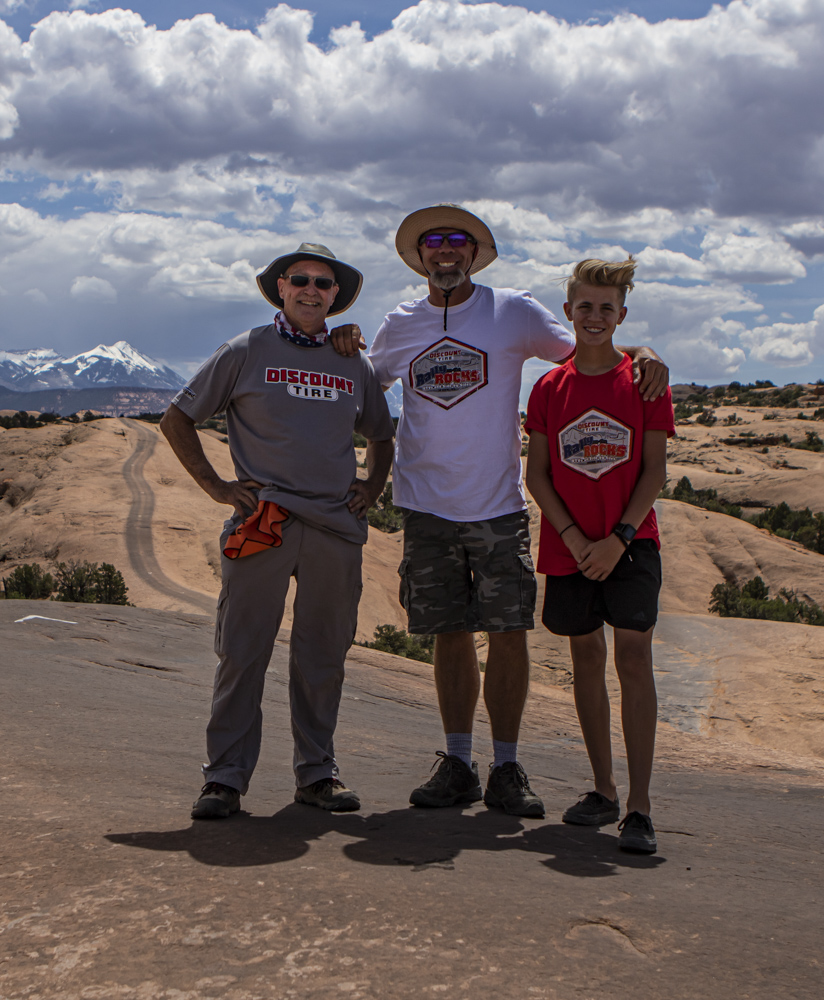 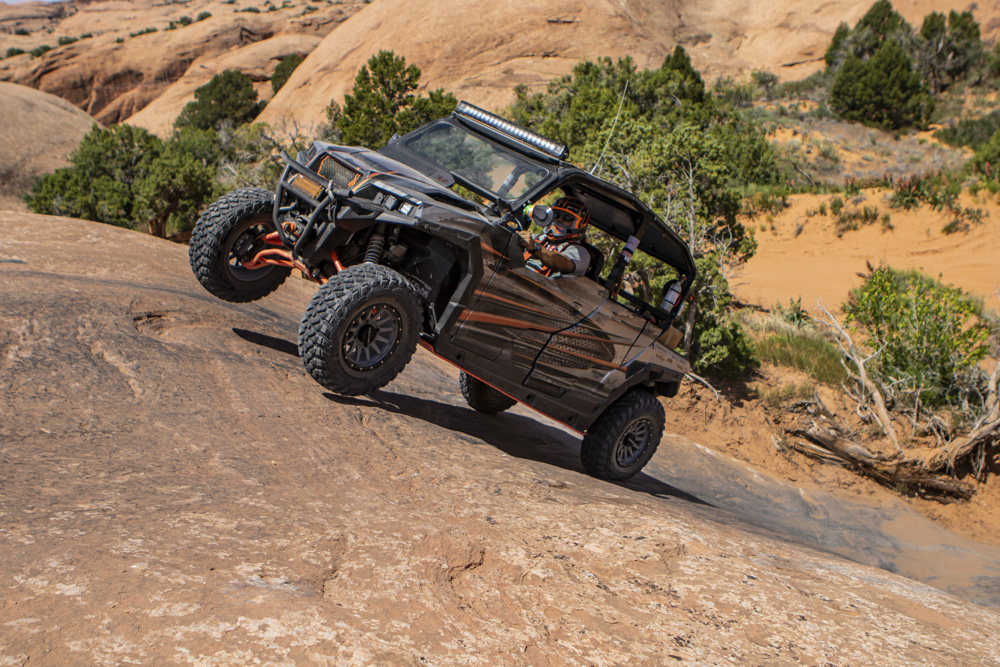 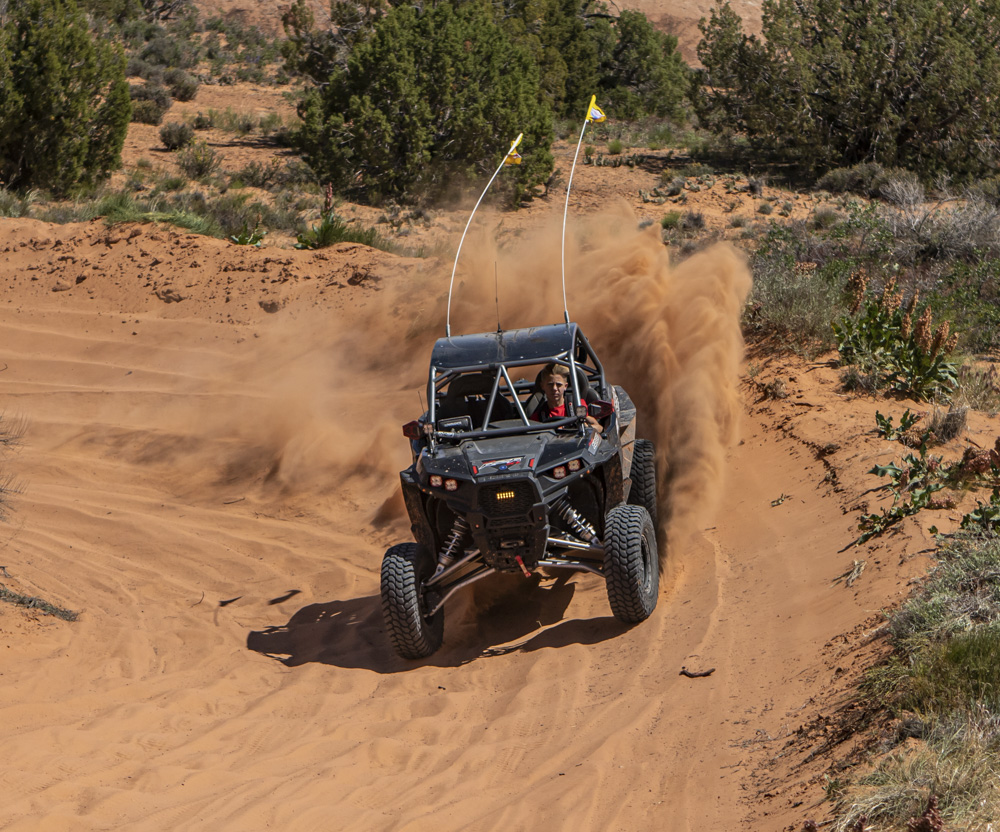 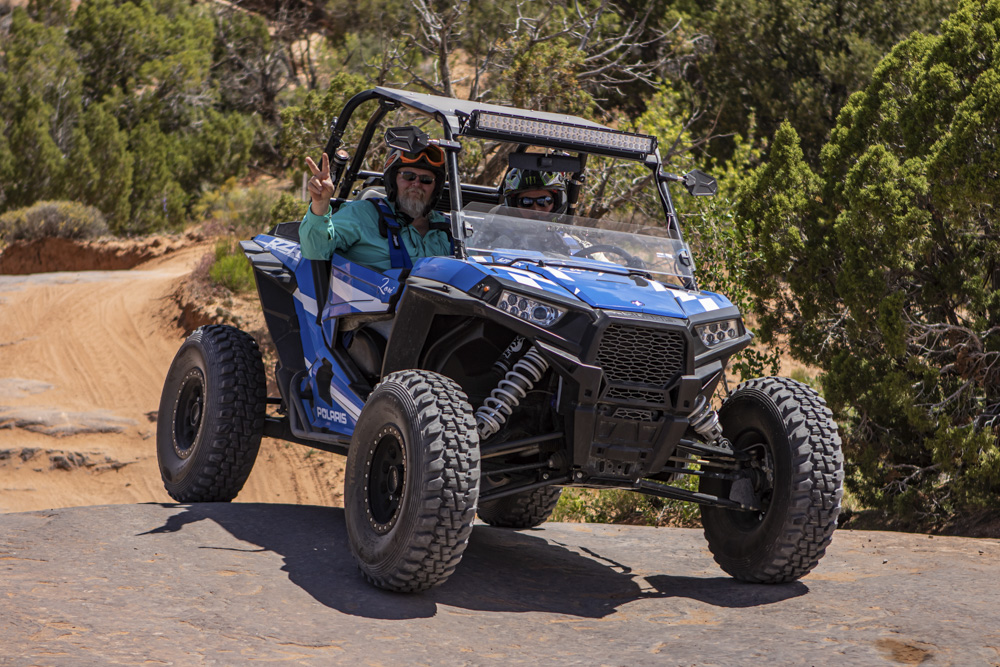 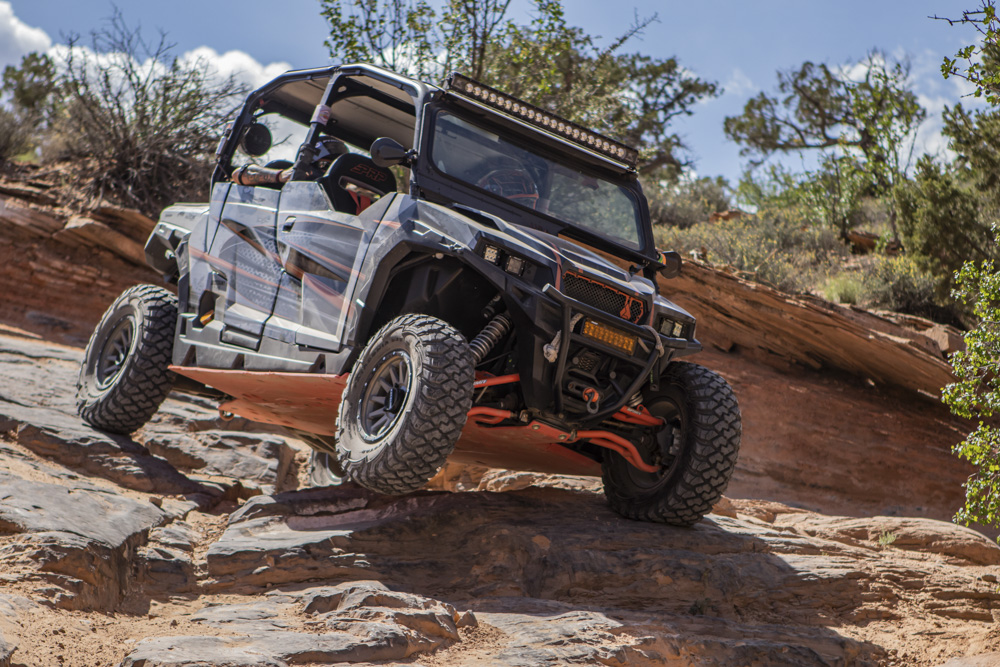 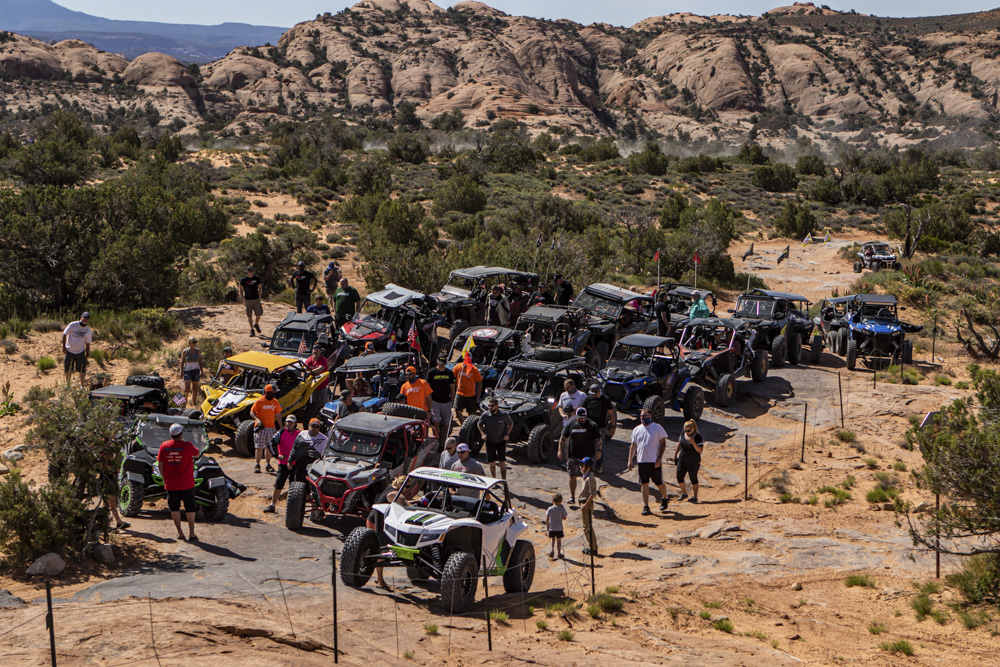 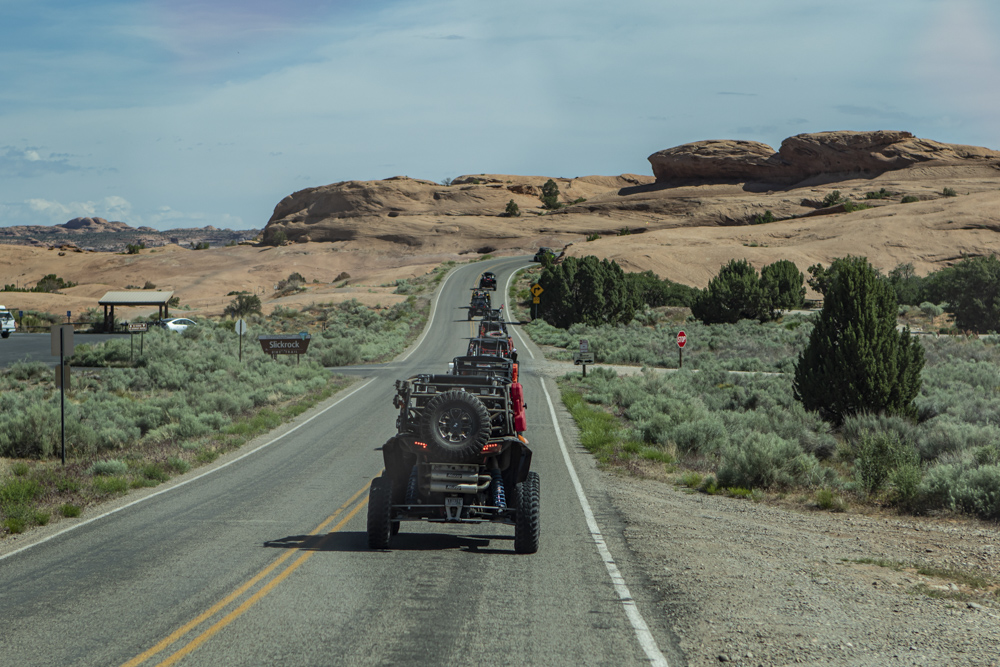 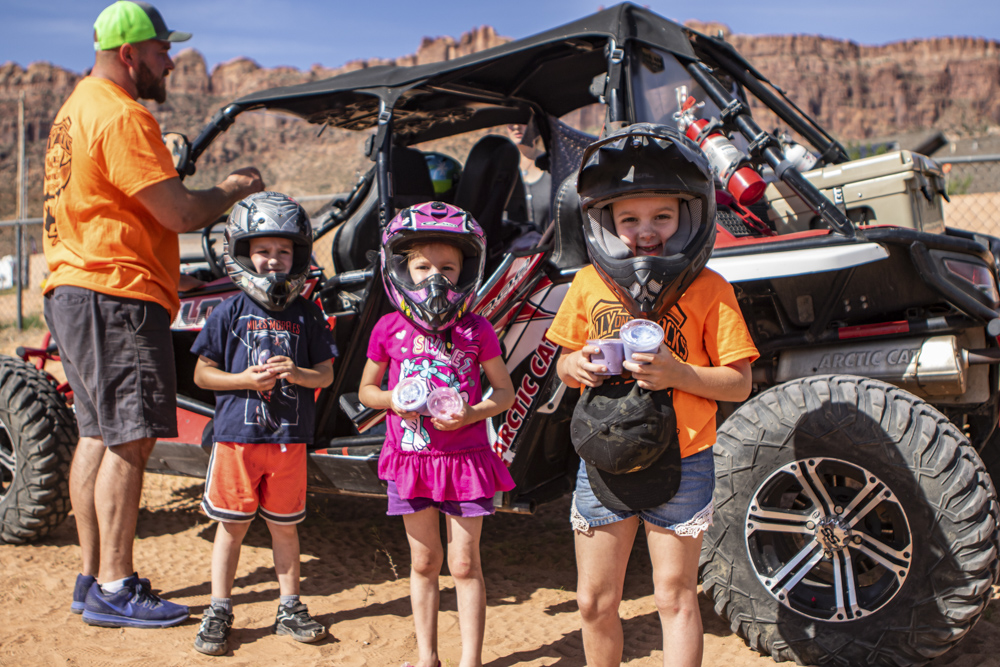 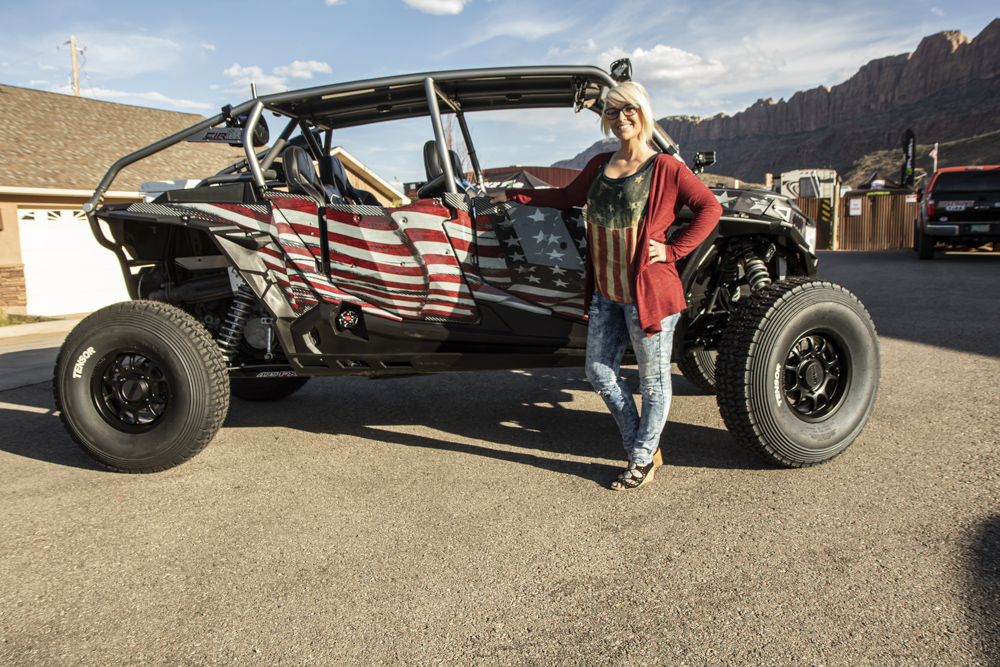 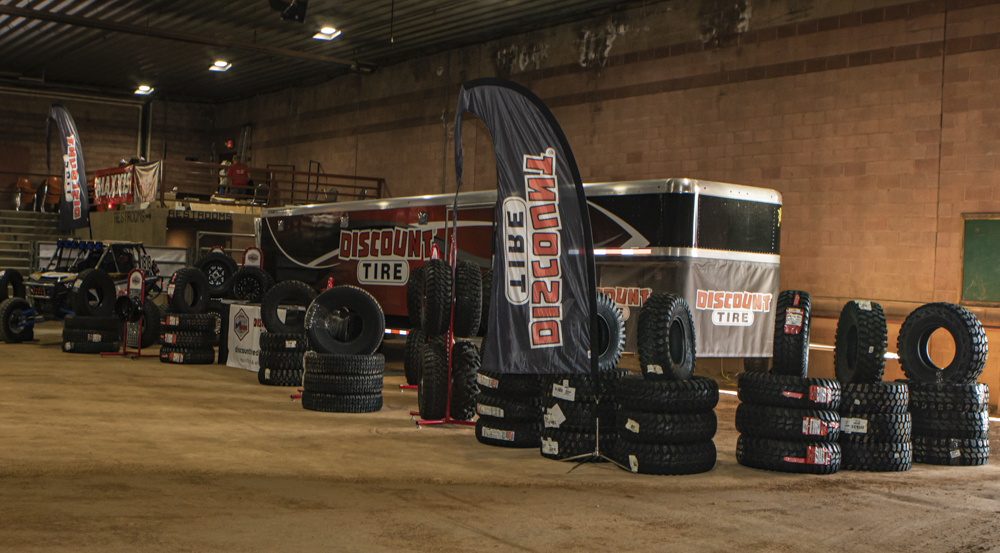