Broken parts can ruin any off-road adventure. Motor mounts take a beating, and when they fail, it is often catastrophic. When motor mounts fail, the motor can drop, causing the oil filter to crush and the engine to pump all the oil out in a matter of seconds. The engine falling can also break the fan, shroud, and ruin the radiator.

On the flip side, a broken motor mount can also cause the engine to torque upwards. That exact scenario happened recently while out on the trail with a CJ-7. Sometime during the trip, the driver’s side motor mount broke. This break allowed the motor to lift 1″-3″, even under moderate load, on the driver’s side. The trails involved pretty rough terrain, which didn’t help the problem. The CJ was equipped with an electric fan setup, which relieved one of the potential problems. However, torque of the motor, due to the broken motor mount, was causing the automatic transmission to change gears under load. The torqueing of the engine also kept breaking the vacuum hose on the brake booster, causing a massive vacuum leak, which made the engine die. Due to the rough terrain, this could have put us in some compromising situations.

As soon as you open the box, you can immediately see the quality of these products. From the way they are packaged to the well-labeled hardware bags- Brown Dog Offroad includes a very well put together, full color, set of detailed instructions that contain helpful tips. 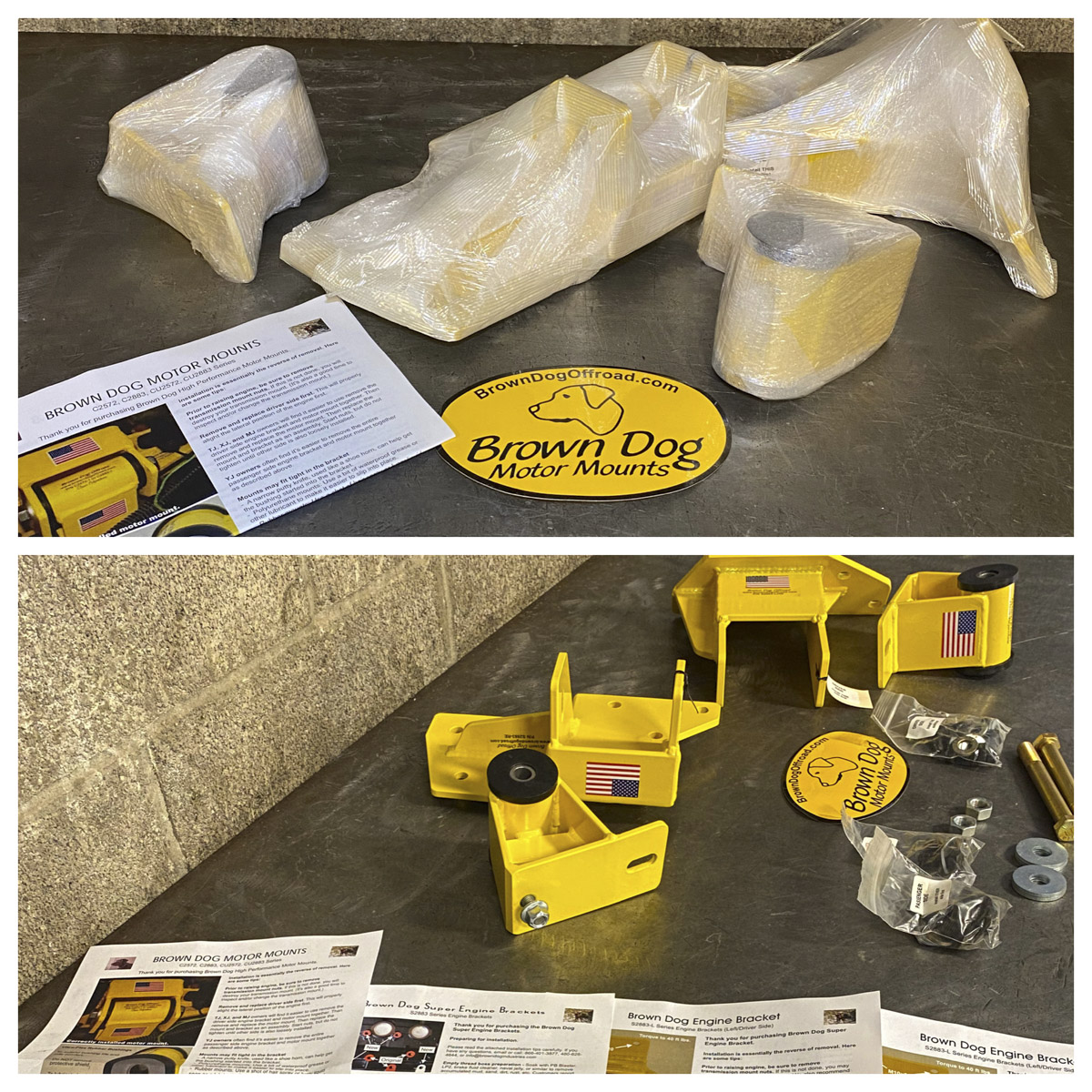 The directions suggest you begin on the driver’s side, which locates the engine position. We started by supporting the engine with a floor jack and small piece of wood to spread the load of the jack’s pad across the width of the pan (so the pan doesn’t dent). Then, we loosened all of the bolts on both of the original motor mounts to give us more free play. Next, the mounting bolts (block to bracket and bolt/nut for motor mount) were completely removed. You also have to remove a short bolt that holds the O2 sensor harness bracket. Finally, the driver side motor mount was removed as an assembly.

We would suggest while the motor mounts are removed that you run a thread chaser or tap through the holes. The original motor mounts only use three mounting holes on the driver’s and passenger’s side, for a total of six holes. The Brown Dog mounts use seven holes on the driver’s side and six on the passenger side, which means there will be several holes that have never had a bolt in them (be sure to reference the directions for the correct hole size locations). Unfortunately, we didn’t do this step and had problems with one bolt on each side so, we had to run a tap through after the mount was in place. 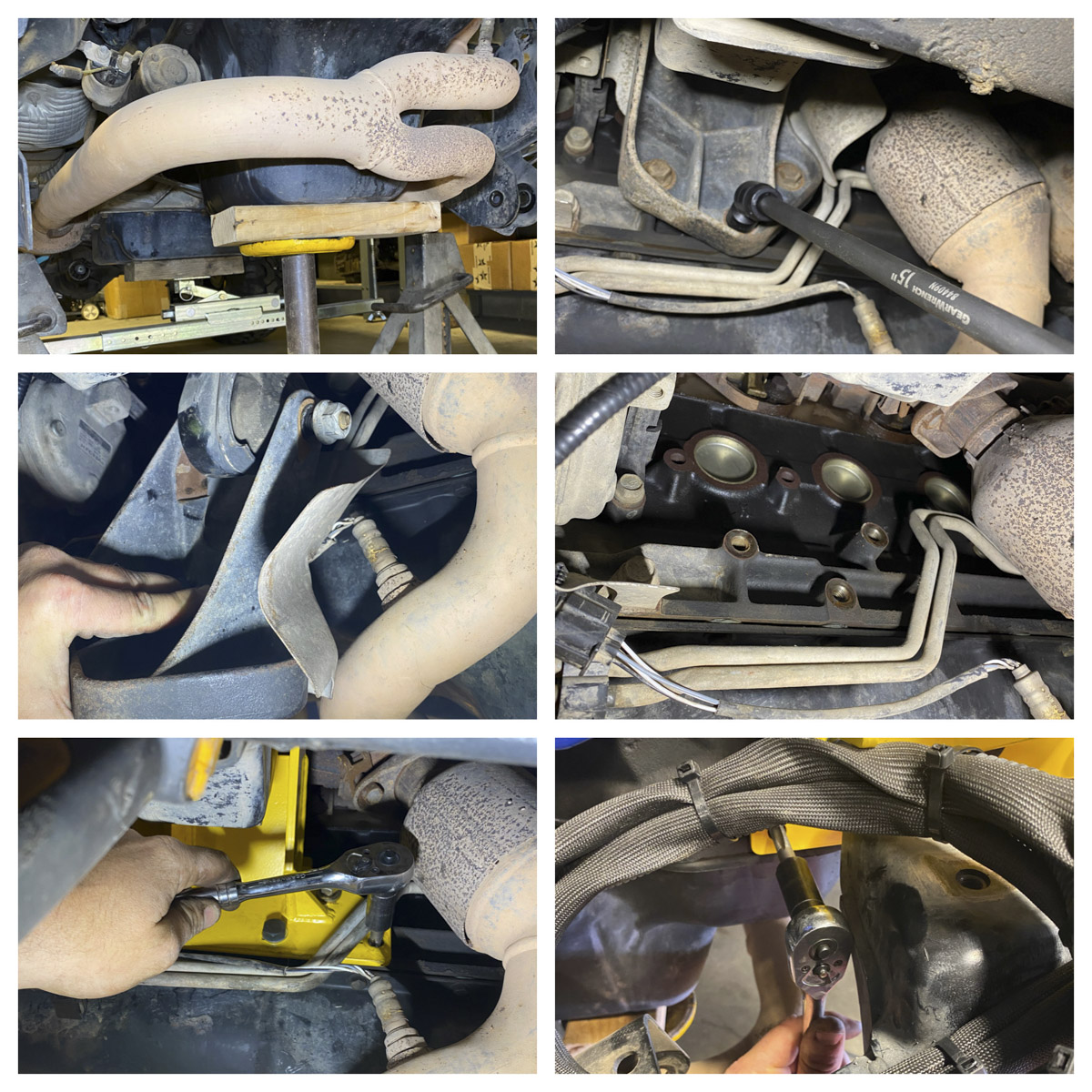 To start the driver’s side install, the directions suggest you mount the motor mount to the block bracket and install it just like it was removed. There are specific instructions on how to tighten the through bolt in the motor mount; at this step, we just barely snugged it up. The new mount and bracket were rotated up, into place, all the bolts were lightly coated with thread lock and then tightened loosely. We had to adjust the jack some to get the motor to the correct height because the new mounts are 1” over stock height. 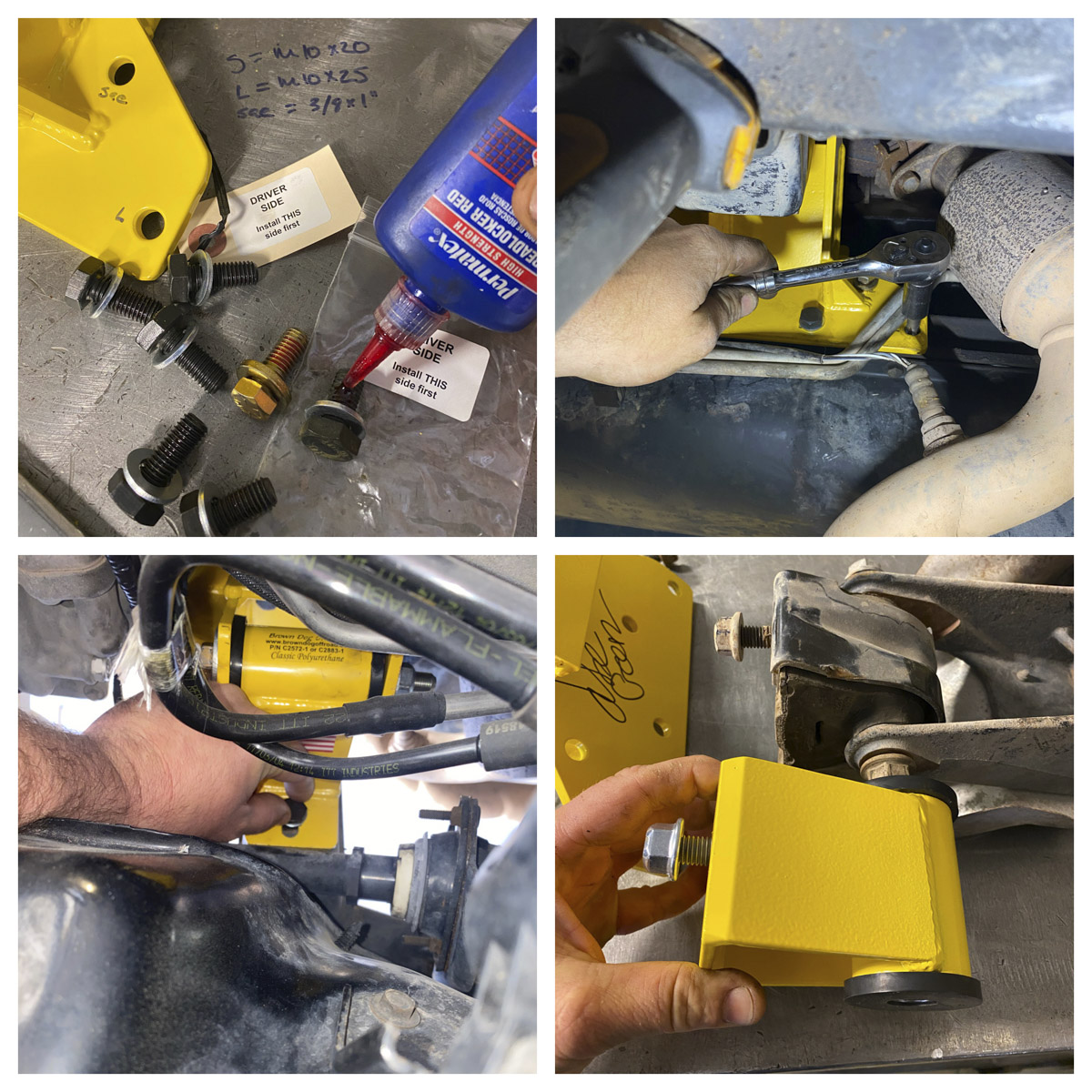 Both sides use different bolts in different locations. We took a moment to look at the directions and mark the new bolt locations. 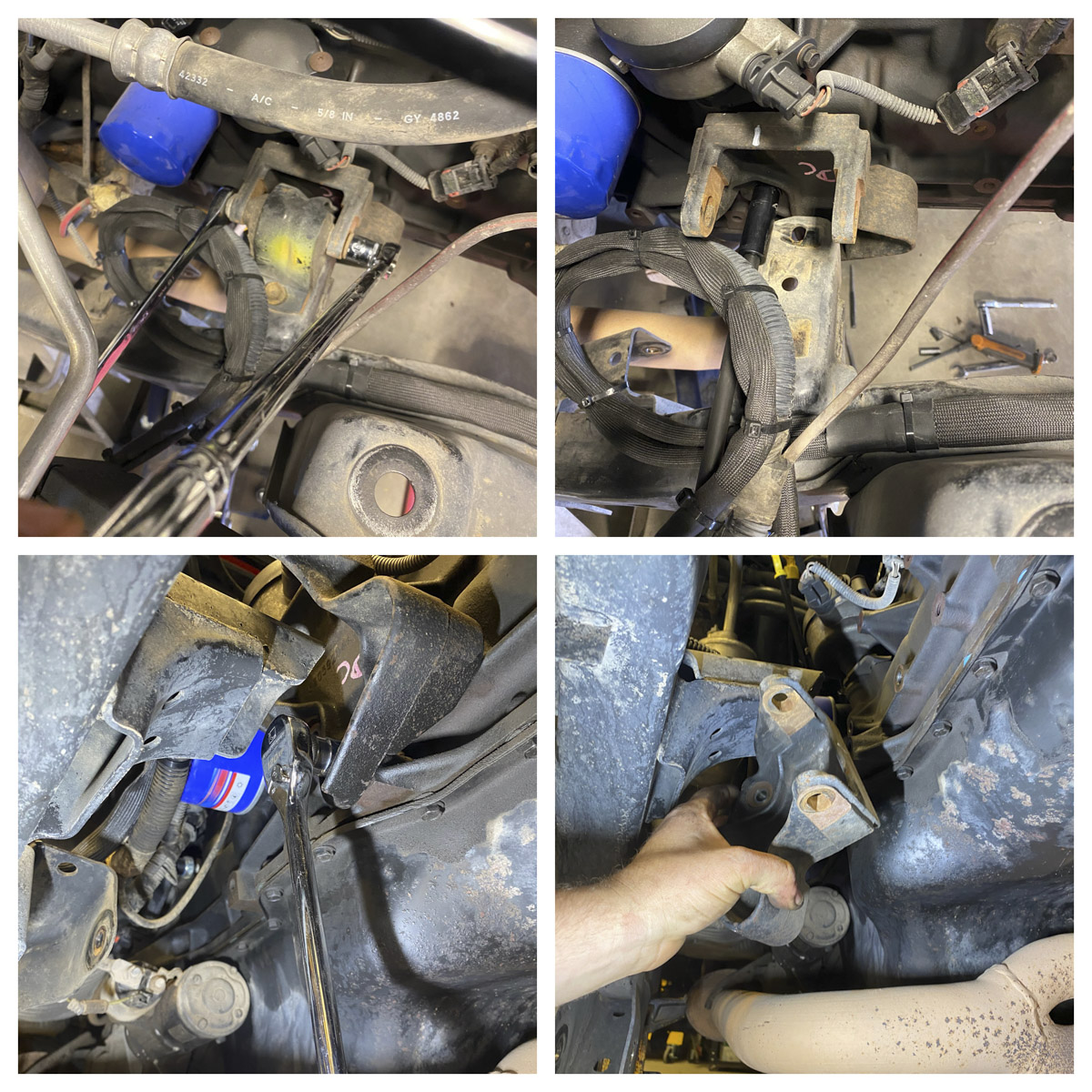 Then the new block mount was positioned in place, bolts were lightly coated with thread lock and loosely started into the correct locations. Then we torqued all the block to bracket bolts on both sides (reference directions for spec on your application). We installed the passenger side motor mount. Finally, the motor mount bolts and cross bolts were tightened per directions. Make sure there is no tension on the jack during final motor mount tightening as this could lead to premature failure. 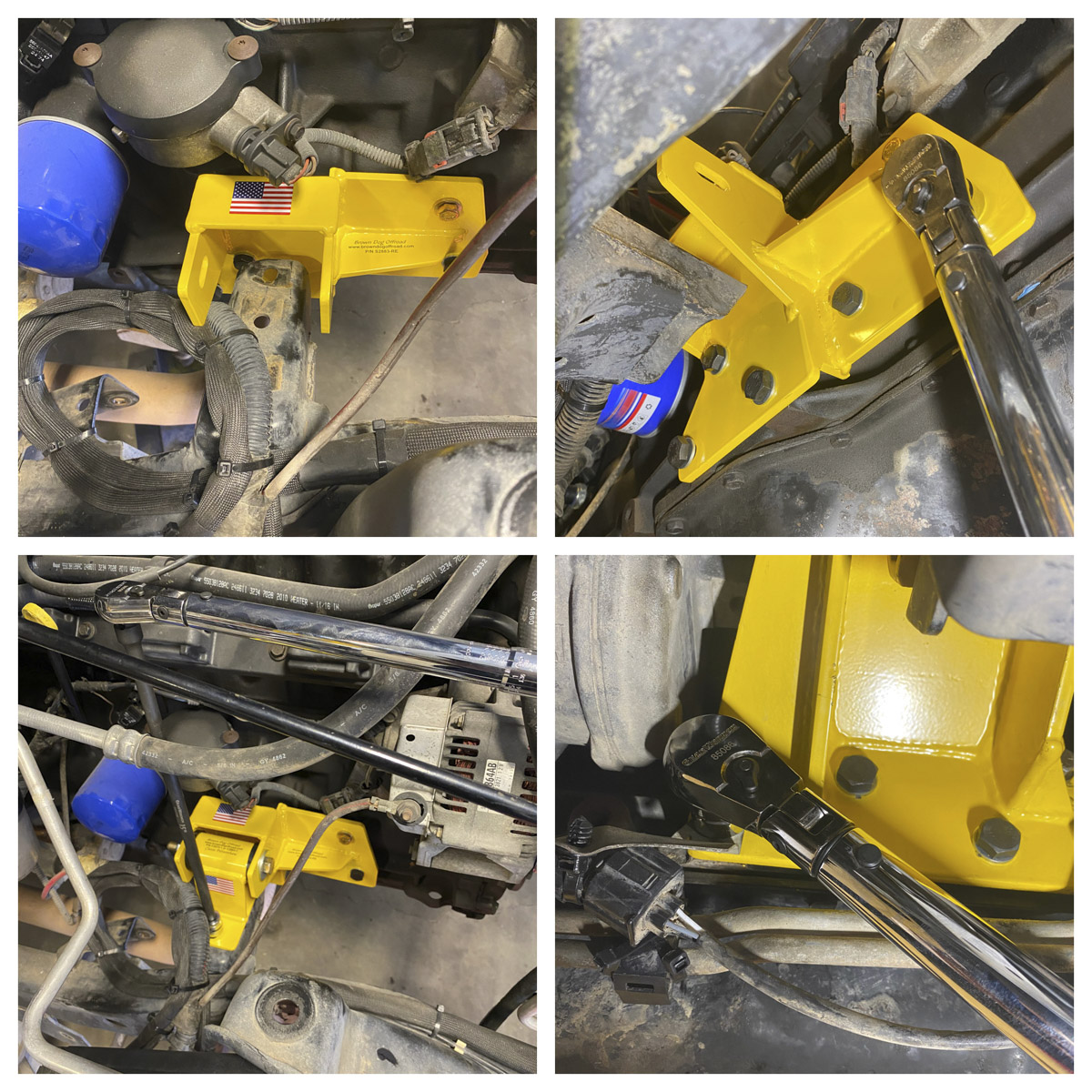 We chose to place a small piece of rubber fuel hose over the transmission cooler hose to protect it from rubbing against the head of one of the new bolts. As you can see in the pictures, the motor mounts are top quality products and have great fitment. It is not necessary to remove fenders or nonrelated parts for install; we only did this because we were working on other parts, and it gave a better view of the passenger side install. 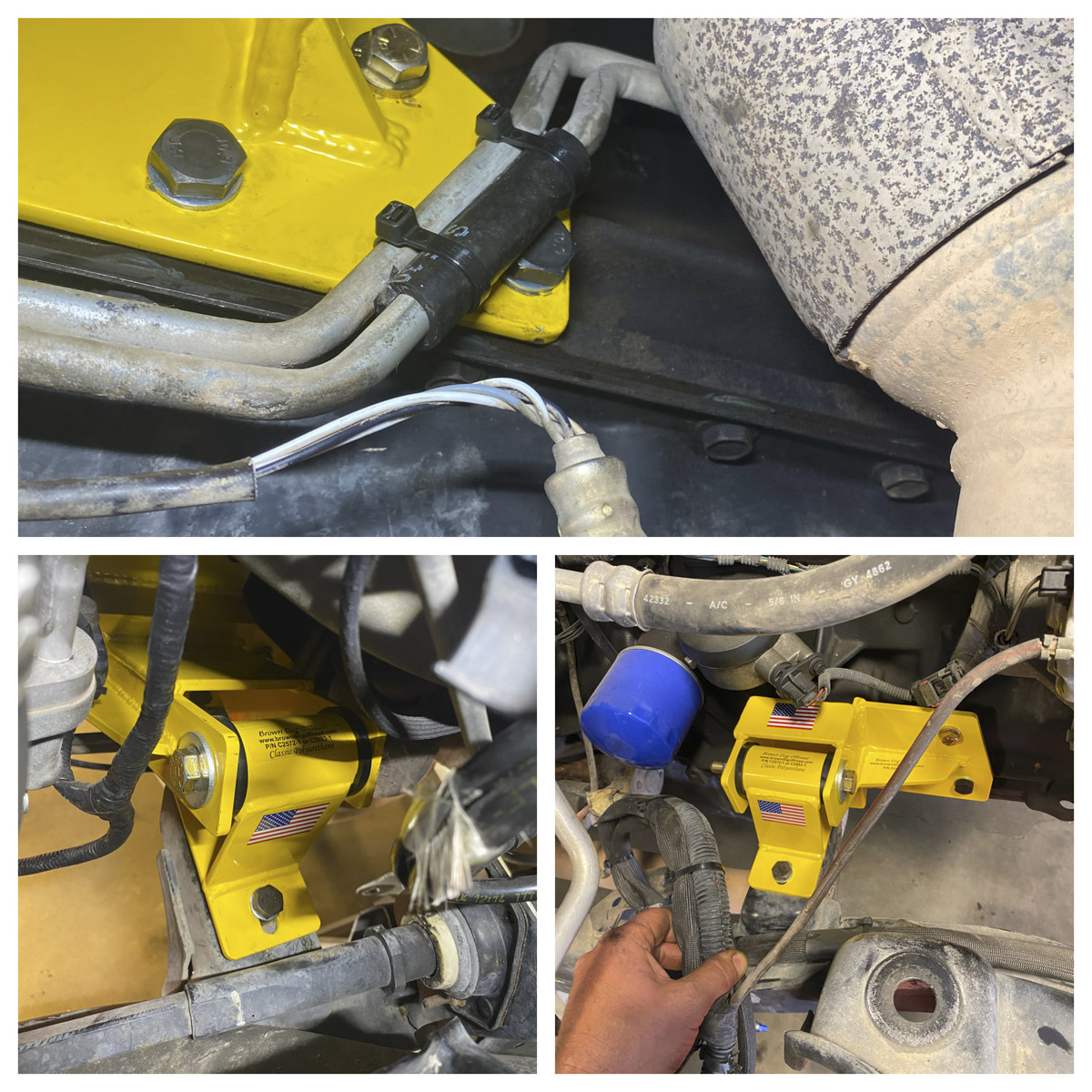