Story and Photos by Jeff Hoggstatus

Northern California is home to some of the nation’s most iconic and well known off-road trails. People travel from across the nation, and around the world, to put rubber-to-rock and test themselves and their off-road machines on some of the most challenging yet most stunningly beautiful terrain offered anywhere. Putting a ‘check’ on your bucket list for trails like The Rubicon (Jeep’s ultimate ‘trail-ready’ testing ground), Fordyce Creek (a challenging series of water crossings and infamous ‘winch hills’), Slick Rock, Deer Valley, and Strawberry Pass can easily turn a long day trip into a multi-day epic… planned or unplanned. The terrain can be tough, breakages and body damage are common, and trail traffic on some weekends and holidays can be almost as brutal as the terrain itself.

Few would even entertain the thought of running these five iconic Northern California trails back-to-back, let alone back to back within 24 hours – this would surely be madness! Drawing inspiration from the first 24 hour Hell and Back Challenge done last year on the East Coast, the first Northern California ’24 Hours of Madness’ started to take shape.

Having completed a “Triple Trail Challenge,” which included the relatively easy trio of Strawberry Pass, Deer Valley, and Slick Rock in a day, and the more challenging Fordyce and Rubicon trails on solid but separate day trips, I knew it was possible to link these five trails. It would require some road travel between trails, airing down and airing up multiple times, and pit stops for gas, but we mapped the trails and figured that maybe, just maybe, if all went to plan, we could squeeze this into an action-packed and sleep-deprived 24hrs. It would be tight, and luck would have to be on our side, but it seemed doable ‘on paper’.

The route would start around 10 a.m. at Fordyce, the hardest of the five trails, then on to The Rubicon, Strawberry Pass, Deer Valley, and end at Slick Rock. I recruited four close friends, and we worked out the remaining details, and then we set out in mid-August, 2020, to conquer the NorCal 24 Hours of Madness.

The Eagle Lake entrance was our starting point at 10 a.m. sharp, from there we made our way to the beginning of Fordyce. Everyone but Spencer drove Driveline Hill, since his JL Sport is open front and rear (no lockers!). We all made the climb without any issues and continued toward Winch Hill 1. Not far past the first water crossing, we had our first major time-sucking issue – Jeff Z. noticed his steering was vague, and a quick inspection showed his track bar broken in half. Having learned my lesson early on in this offroad life to always carry spare parts, I dug around in the back of my Jeep and produced a spare front track bar. My co-pilot, Jeremy Repetto, leaped into action and led the effort to swap out the broken track bar quickly, and we were back rolling again.

Shane, Paul, and I went up and through Winch Hill 1, while Jeff and Spencer took the bypass. Paul only had a small issue with the rock at the end placed in the middle of the path; the rock forced the Jeep to lean precariously as it lifted a tire a few feet off the ground, rewarding him with a love tap from a rock on the rear tub… body damage, check! We navigated Winch Hill 2 and 3 without issue. Driving full-bodied Jeeps, we all took the ‘easier line’ up Winch Hill 3. Somewhere between Winch Hill 1 and Winch Hill 5, Jeff Z. hit a tree, rock, or some other unseen bogie that left him with a damaged hardtop and rear passenger door. It just didn’t seem to be Jeff Z.’s day, and the fickle finger of fate hadn’t finished with him yet. As Jeff approached Winch Hill 5, the last of our group to tackle the obstacle, Jeff’s drag link broke. I run a flipped draglink on my Jeep, so that is the spare part that I carry. However, Jeff has Spicer Ultimate 60’s and runs a non-flipped draglink. The only option was to flip the flipped draglink and install it backward (pitman arm side to the knuckle and knuckle side to the pitman arm). We struggled to get the old one off, but some lube and an energetic beating from a 2-pound sledgehammer finally broke it free. Ninety minutes was spent on the drag link fix to get Jeff over a few more boulders; from there, it was a fire road to the pavement.

Staging to staging, Fordyce took us 9.5 hours, longer than we had planned. We were going to have to hustle to make up some time!

The temp fix to get Jeff rolling wasn’t going to allow him to continue the trip, so once off the trail, he sought shelter in Truckee.

After airing up, the rest of us headed toward Tahoma, stopping to fill up in Tahoe City. A few curious locals asked where we were headed. They gave us a very strange look when I told them the Rubicon Trail. “You guys going to start in the morning?” I laughed and said, “No, we’re going through the whole trail tonight, then we will be doing three more trails tonight as well.” They looked at me, laughed, and said, “Good luck with that…most people take 2 to 3 days to complete the trail” (It was about 8 p.m. at this point). As I stepped back in my Jeep, I said, “We’re far from normal,” and we blasted toward the Tahoma staging for the Rubicon Trail.

We aired down at the Tahoma staging, and off into the night we went. I was leading at a fairly fast pace due to the time lost on fixing the breaks on Fordyce. We came across three buggies driven by 14-15-year-old young ladies with their mothers in the passenger seats. Seeing that made me smile ear to ear – so awesome to see! I hope when my daughters are old enough, they fall in love with wheeling and the off-road life too! We made quick work of Cadillac Hill, zipped through Rubicon Springs, and across the bridge. Going up Big Sluice has always been one of my favorite sections, and I knew what lines to take to make quick progress. We passed Buck Island at midnight… yep, we were making good time. We bypassed True Old Sluice and headed up Indian Trail. We were making good time when Spencer radioed that he was having clutch issues, so we also skipped Little Sluice. We kept the pace and just motored through everything, somehow completing the Rubicon end-to-end in 4 Hours and 30 minutes!

We all aired up for the trip down Ice House road and toward Strawberry Pass. At this point, Spencer decided that continuing with the clutch issues may be a bad idea – the noises and smell coming from his Jeep confirmed this for us all. He made the decision to call it and limp home – Fordyce and Rubicon in an open/open Jeep was a pretty spectacular achievement anyways!

With three trails to go, we started to feel the weight of more than 18 hours of driving – we were pretty tired! With a strategic caffeine boost, we motored toward Strawberry Pass, stopping to fill with gas again, hopefully for the last time on this trip. We blasted through Strawberry, mostly in two-wheel drive, without airing down – we considered this the ‘rally stage,’ which we finished in 60 minutes flat, end-to-end.

We jumped onto HWY88 toward Blue Lakes, storming toward and right on to Deer Valley, only partially airing down to 15psi after about 20 minutes on the trail to smooth the ride and save more damage to our internal organs. By this time, it was around 7 a.m., and the sun was beginning to come up. The meadow by the first water crossing was covered with fog and made an incredible view! We did the whole trail in an hour and 25 minutes, without a single issue, finishing at about 8:25 a.m. we had less than 1:35 hours to get to, and finish, Slick Rock!

The clock was ticking, so we chose to just drive the 15-20 minutes to the beginning of Slick Rock without airing up. In our planning, we had built-in two hours to run Slick Rock, but we only had an hour and 15 mins left on our 24-hour countdown… so we headed in at the same quick pace that we had been running since the Rubicon, without pausing to air down to our usual single-digit trail pressures.

With a renewed energy and a touch of ‘redline fever,’ we sped through Slick Rock, barely slowing as we tackled ‘The Gauntlet’ and ‘The Rock Pile.’ Time pressure also meant that we skipped playing on the ‘Buggy Line’ on the left before the stairs; instead, we cruised up the Stairs without pause. With adrenaline pumping, we made the last few turns, crossed the bridge and headed up to the Slick Rock sign on the Utica side and stopped the clock. Checking the time, we finished Slick Rock end-to-end in 50 minutes, with 25 minutes to spare on our 24-hour target!

Mission accomplished – The NorCal 24 Hours of Madness in 23 hours and 35 minutes, completing Fordyce Creek, The Rubicon, Strawberry Pass, Deer Valley, and Slick Rock trails. We started with five Jeeps and finished with three, never leaving a buddy stranded on the trail, and setting some personal trail time records along the way.

I am so glad to have these amazing trails in our back yard and have friends who are willing to help turn my crazy ideas into a reality! Truly awesome friends and fellow wheelers! Now, time to recover, reflect, and plan the next crazy adventure. 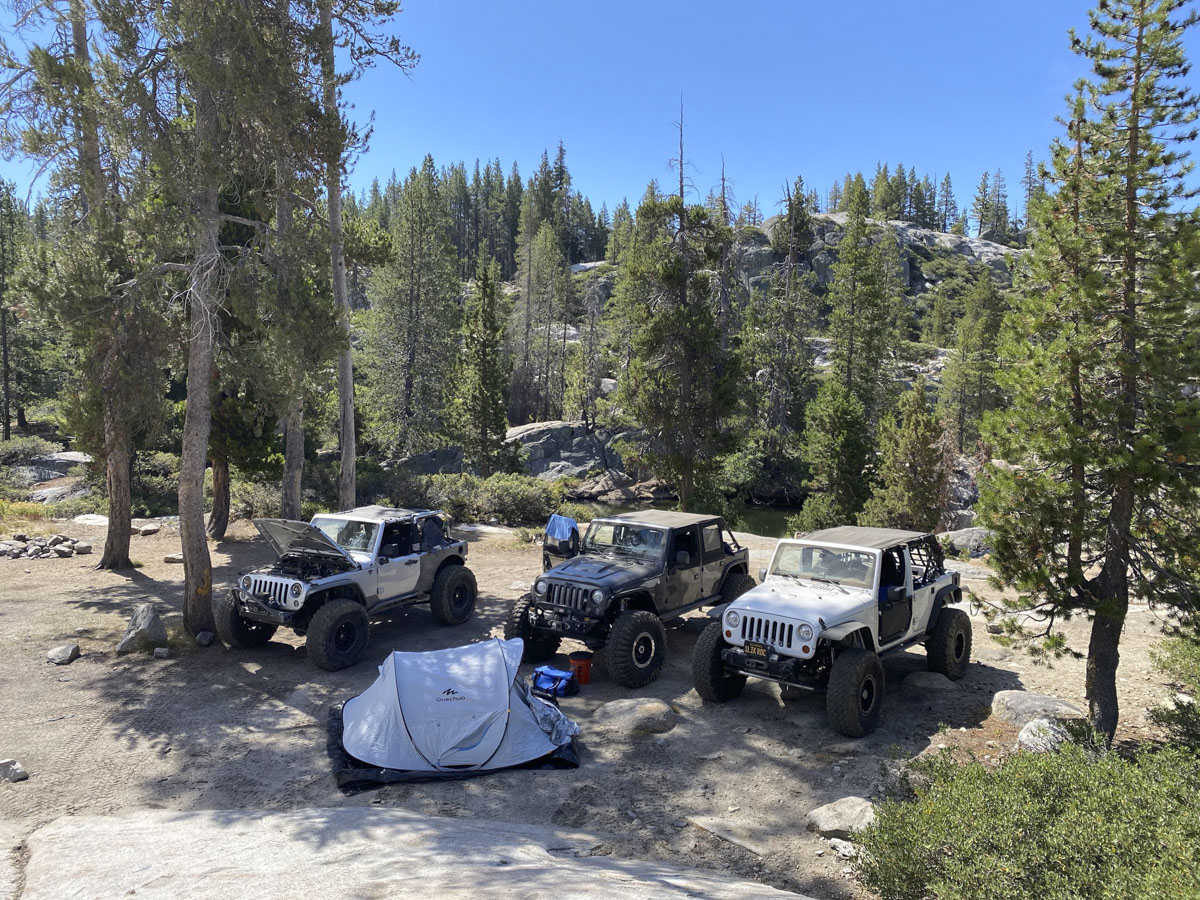 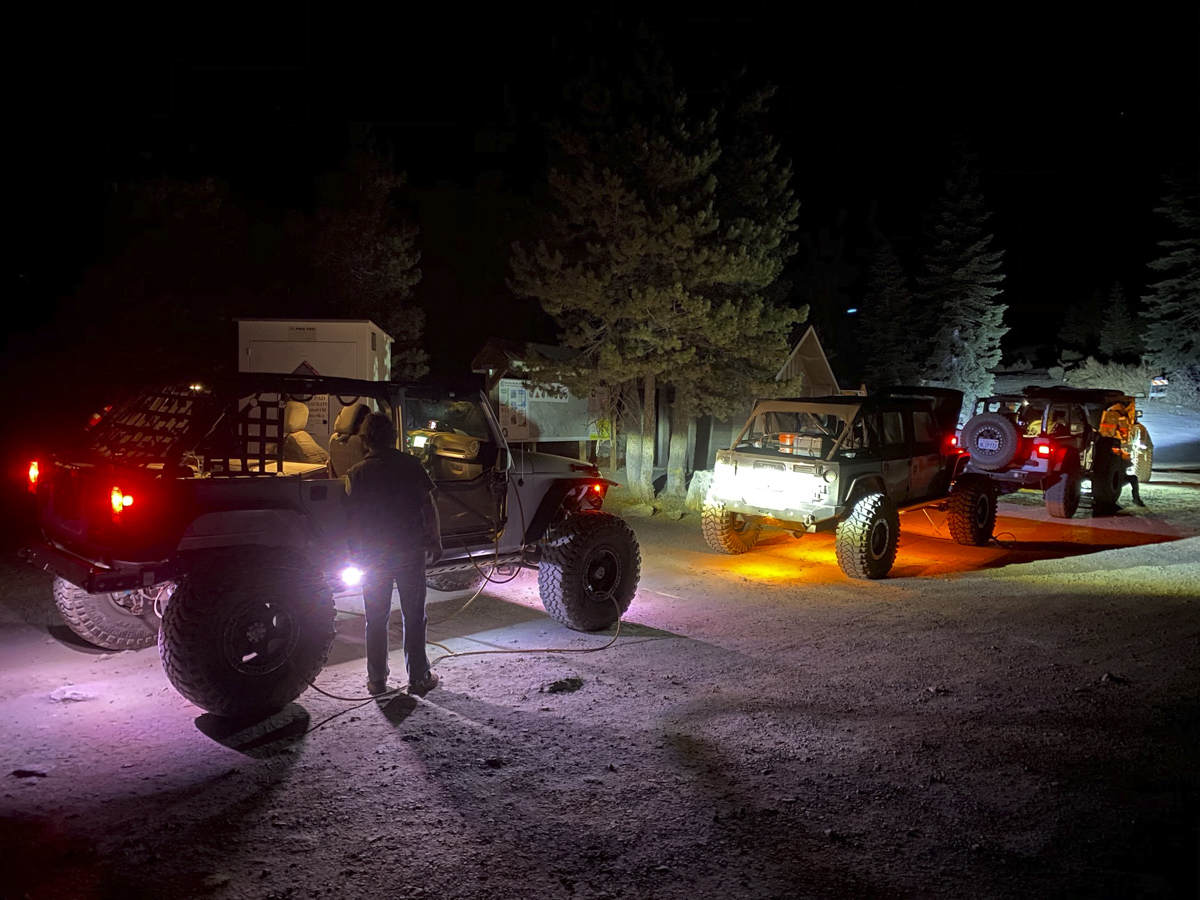 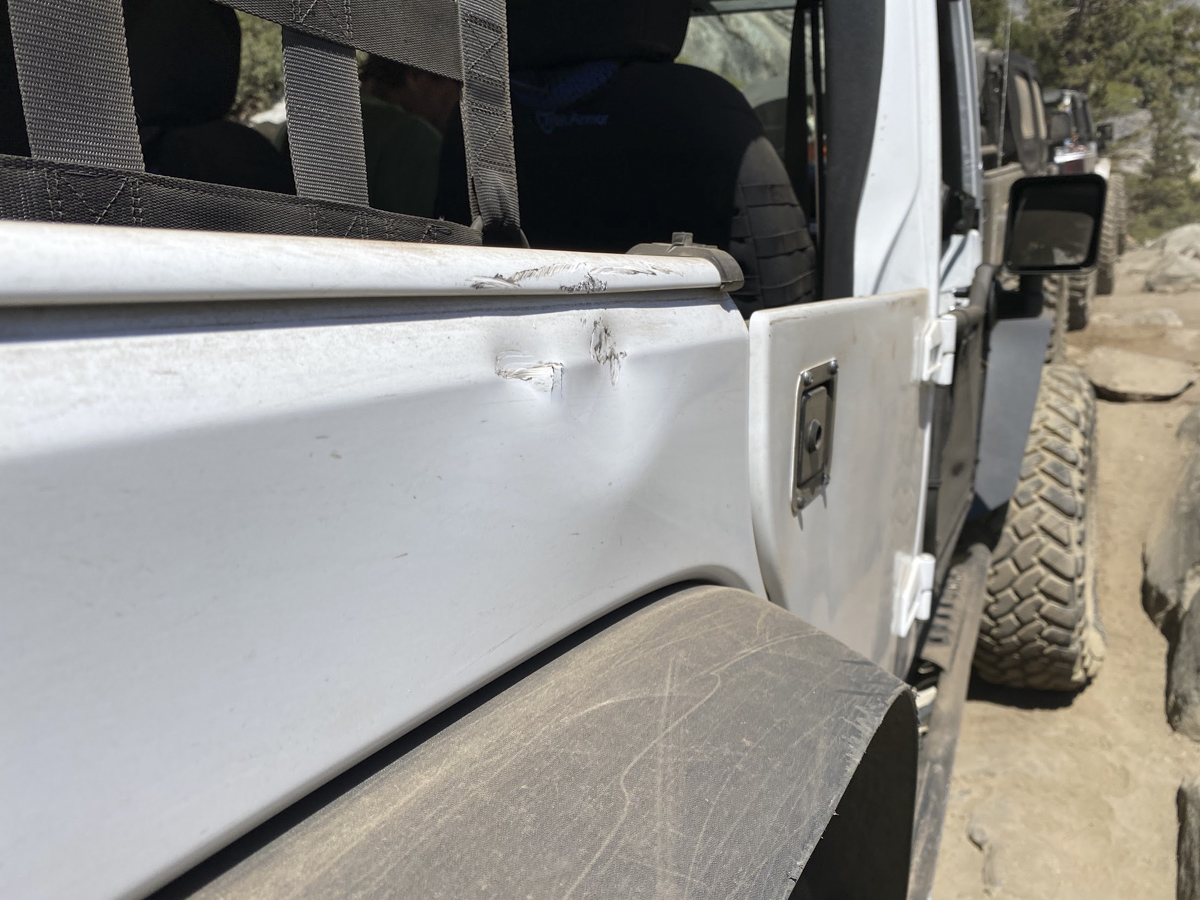 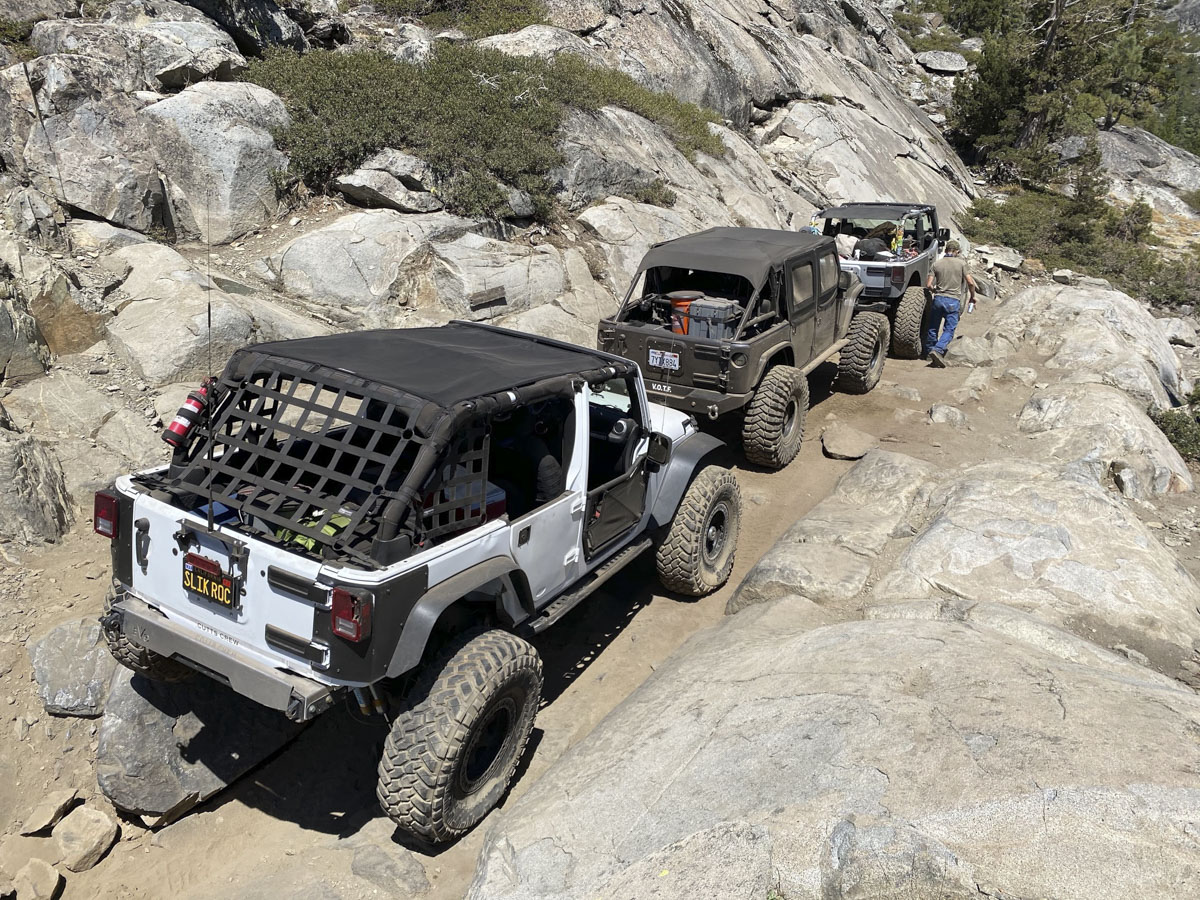 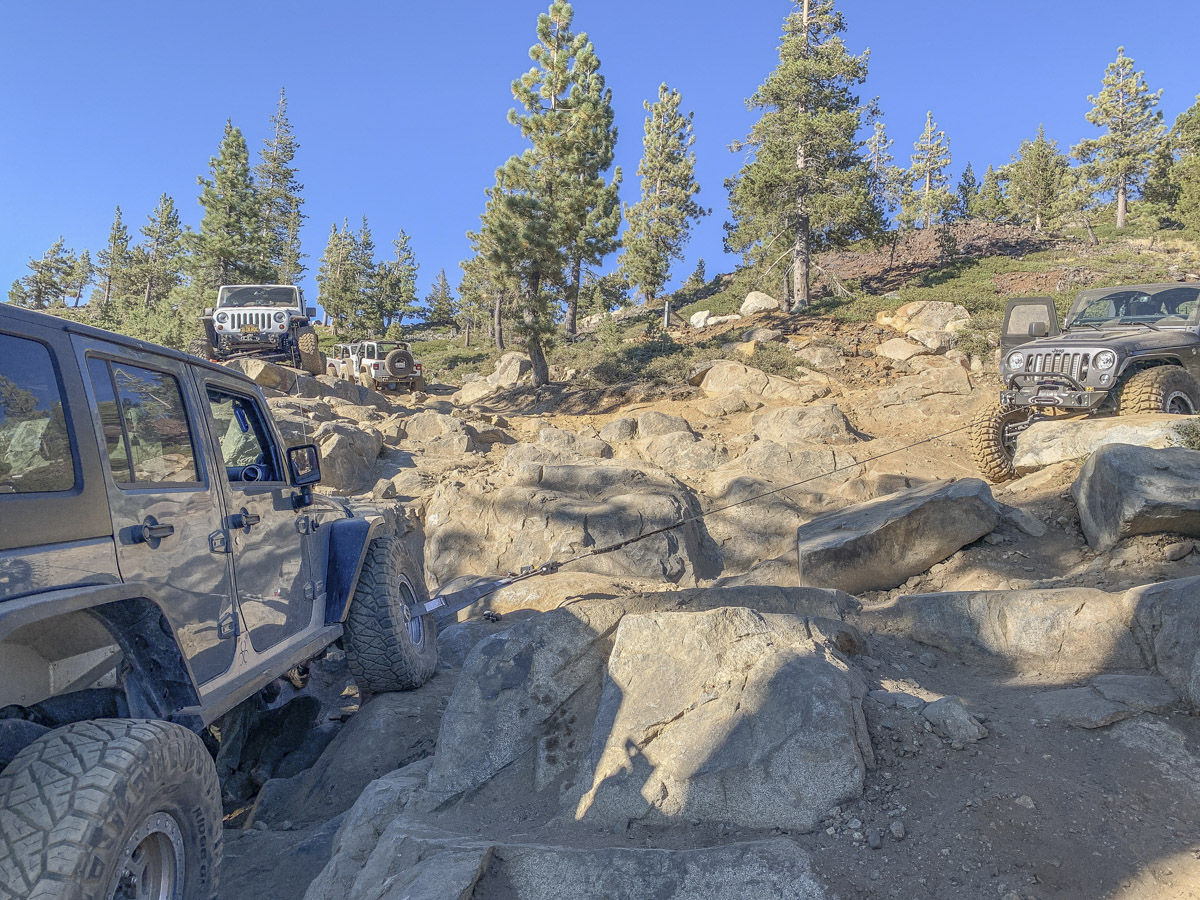 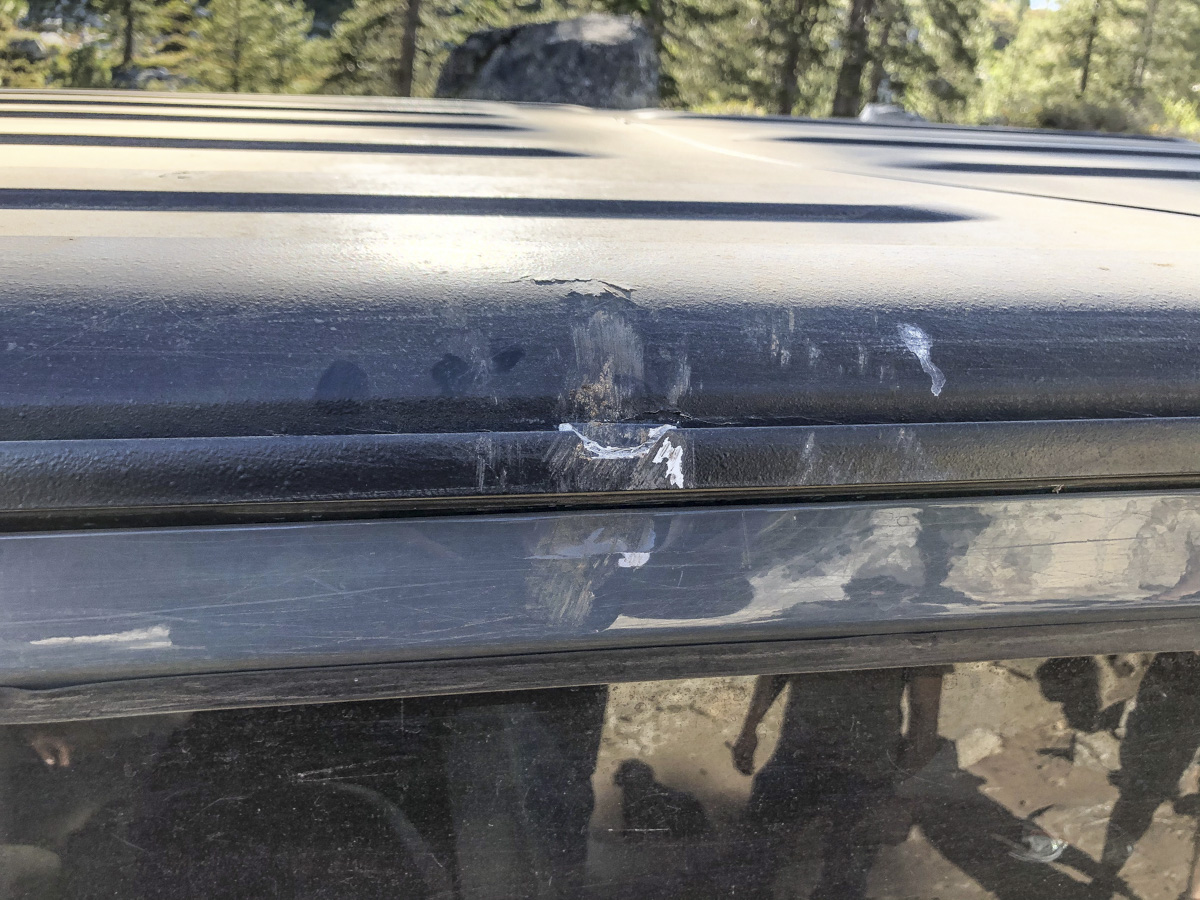 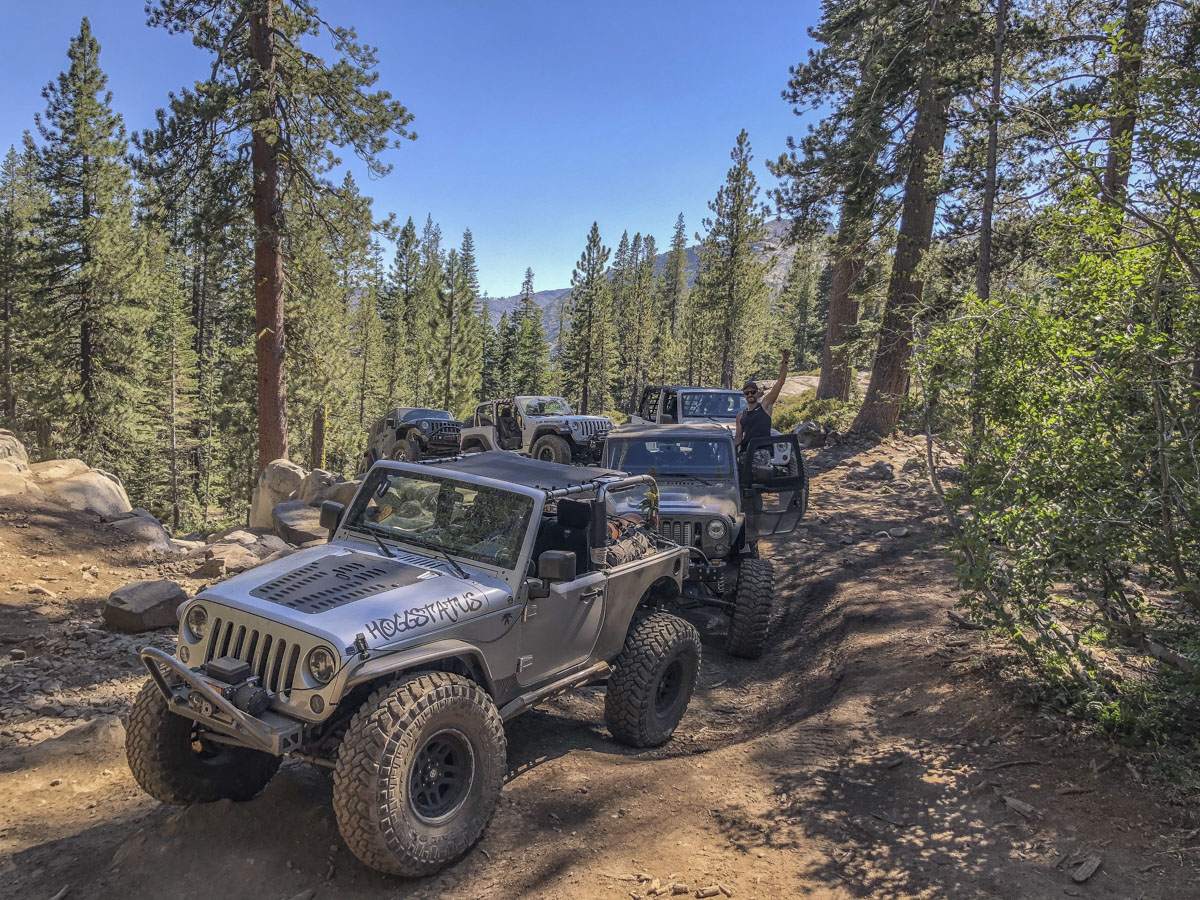 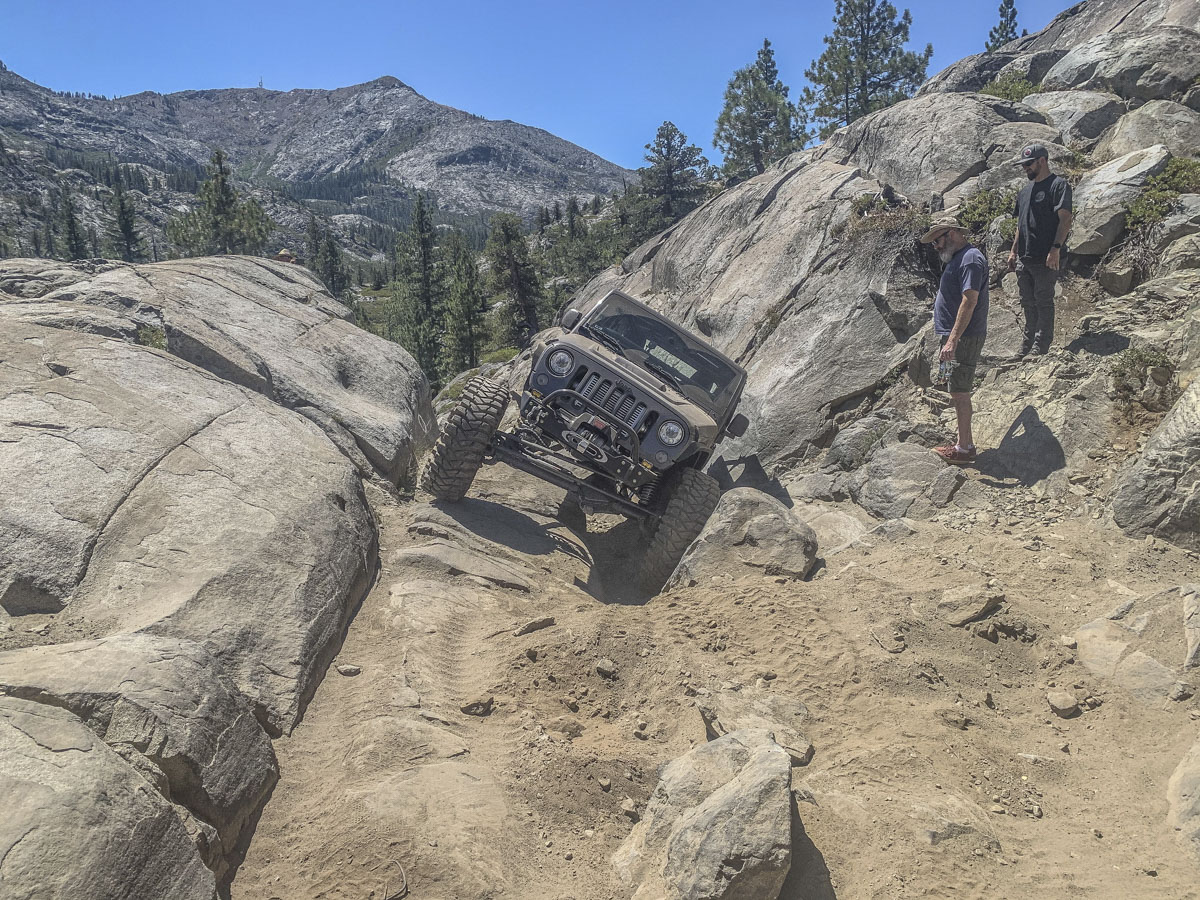 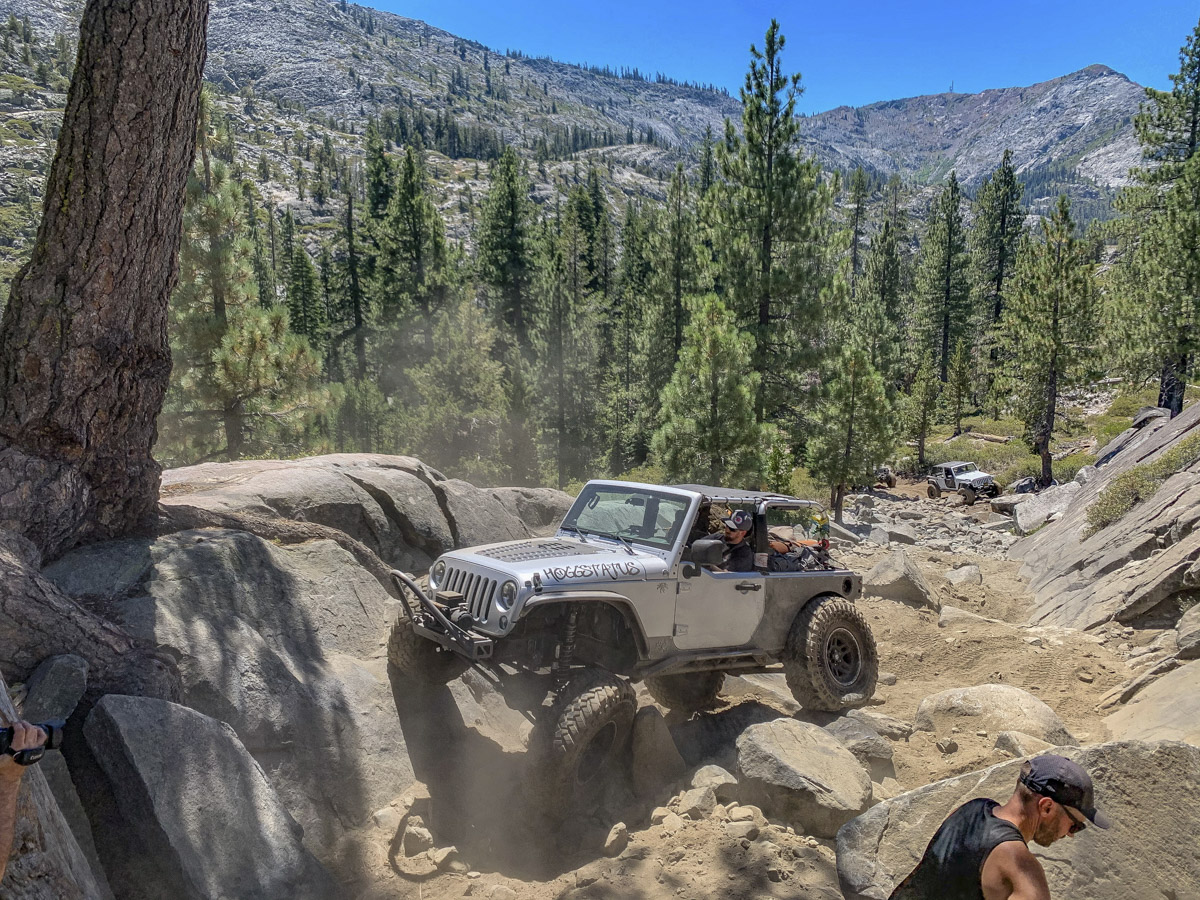 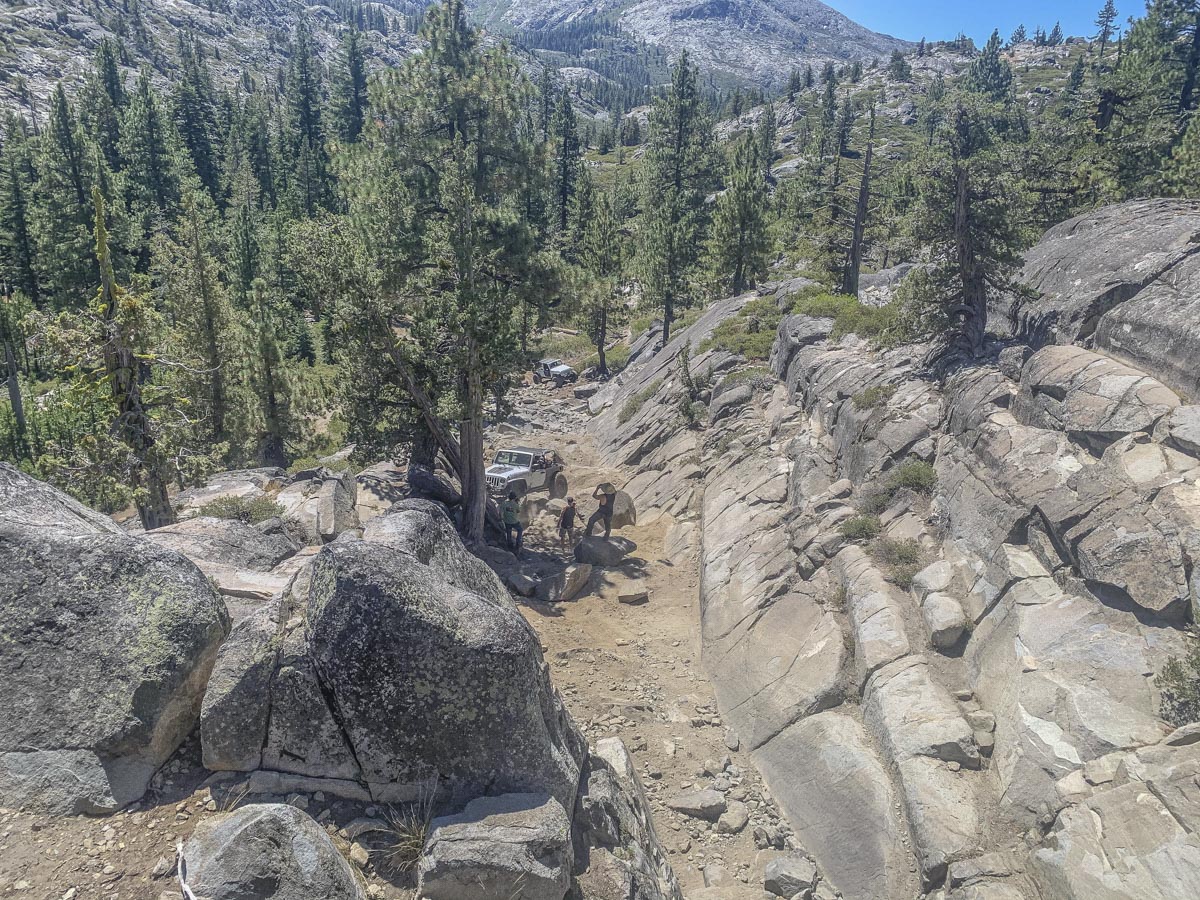 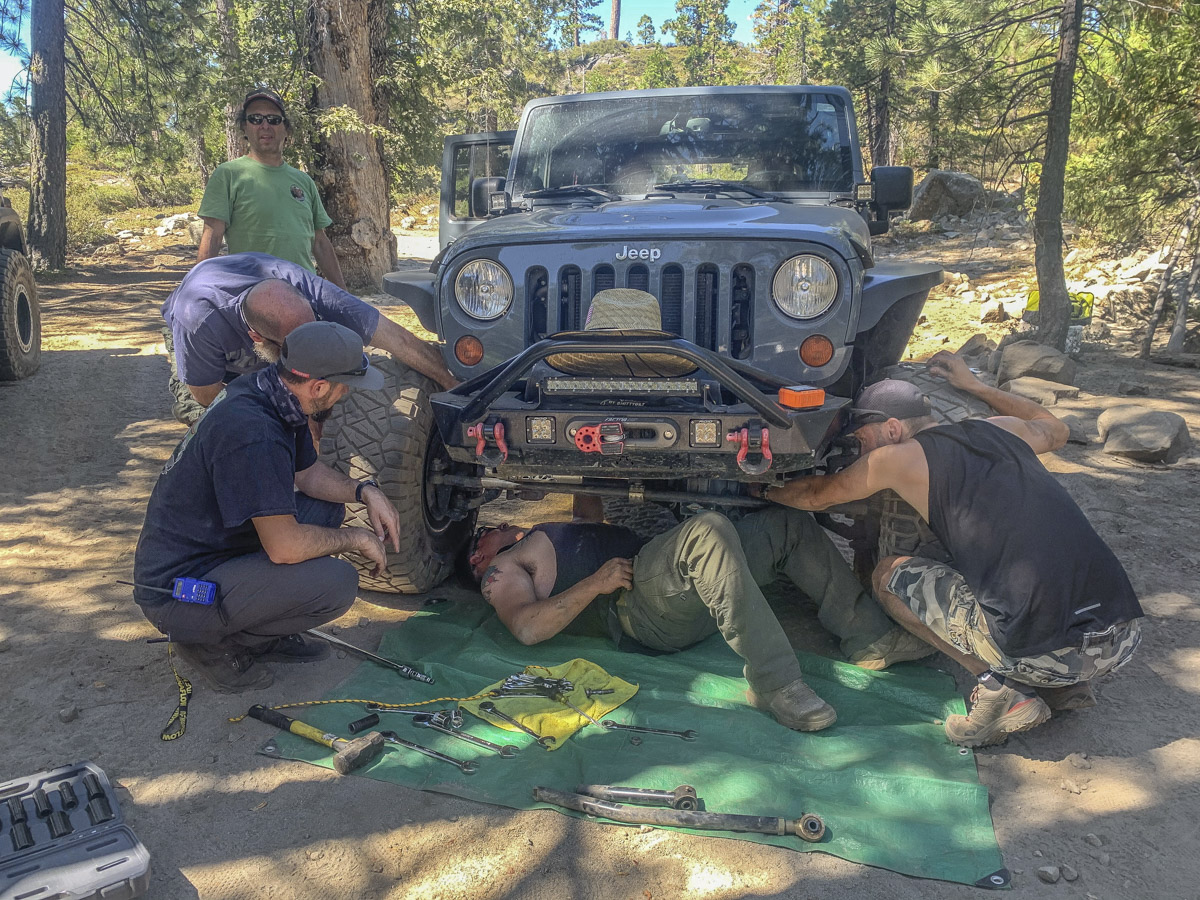 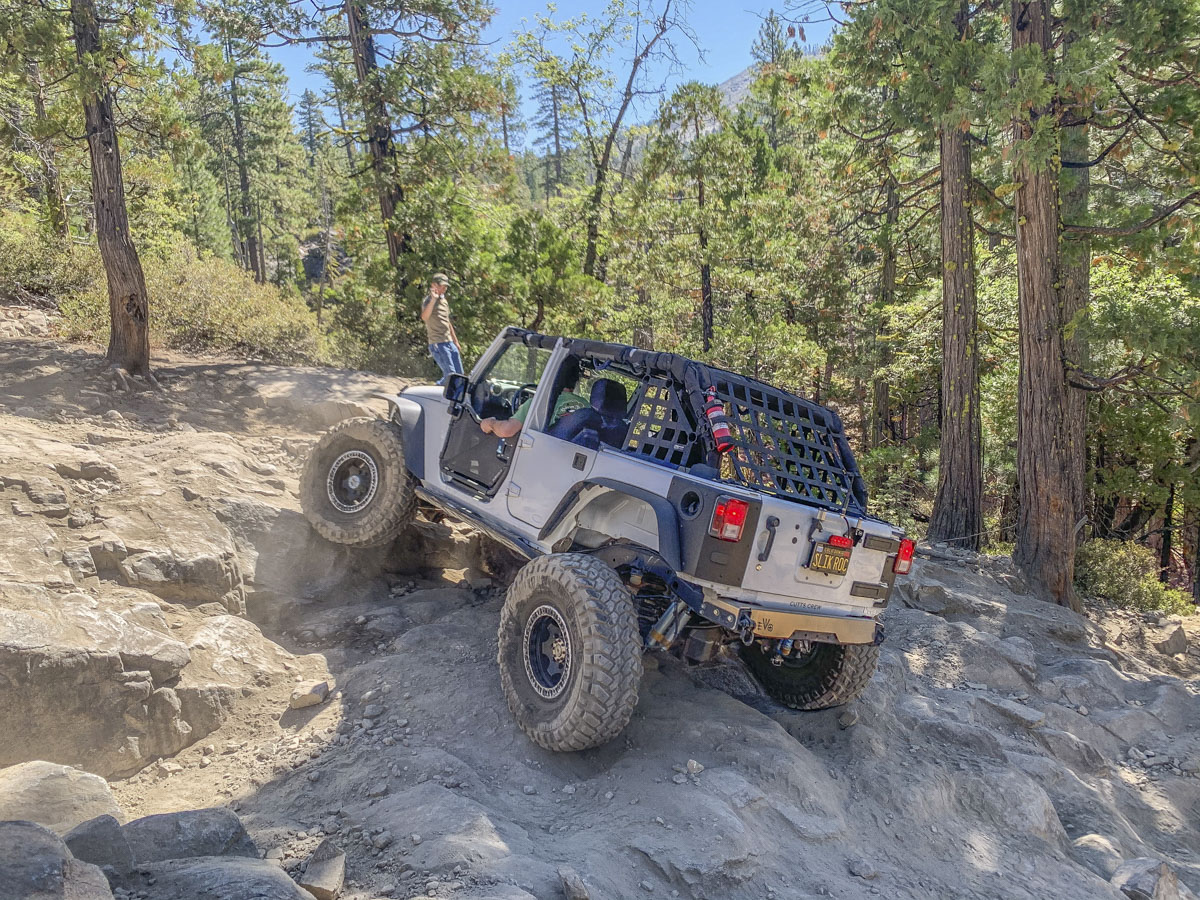 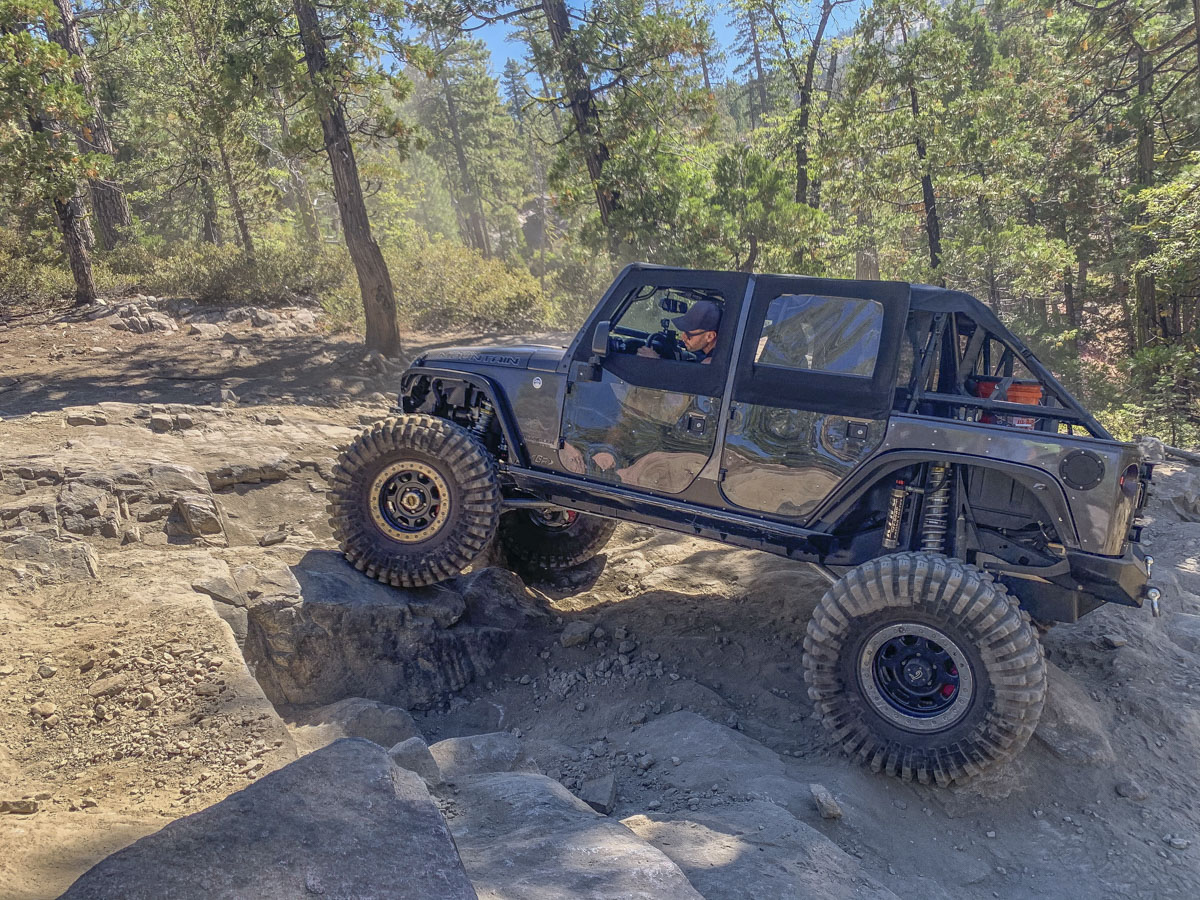