For European off-roaders there’s nothing better than going out for a weekend greenlaning or having a bash around a pay and play site somewhere. Maybe, if you’re really serious about your Land Rover, you’ll go on a proper overseas off-roading holiday to somewhere like Croatia or Morocco every few years. But if you want to explore a little further afield you’ll come across a geographical limitation because anywhere else will take a week to get to before you even start any off-roading…which is where Fly-Drive companies come in. 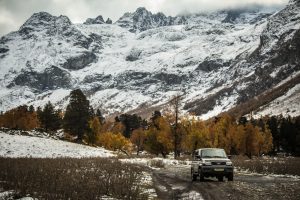 After working for nearly twenty years with huge trans-Asian expeditions Aljona Dudashili and her husband Andrei are downscaling slightly to focus on more family and friend oriented off-roading holiday tours in their home country of Russia. Run with all the experience amassed from decades of organizing high-end expeditions for clients such as VW and Land Rover, these holidays will be in the stunning Caucasus Mountains in southern Russia.

The first road out from our luxury base at the Dahovskaya Sloboda hotel was up the side of a gravel quarry with big and overloaded trucks hurtling towards us and for a few minutes I was wondering if the Russian idea of ‘soft roading’ was a bit too soft. Nope. Up front in the lead car, Gennady turned down an unmarked trail into the forest and I was suddenly fumbling for the 4L button as the UAZ slewed around in the muddy ruts. Some detours around some deep water-filled holes forced us to slide around inches from the trees, furiously turning the wheel fully one way then the other. It wasn’t just playing in the mud for the sake of it though as after a few miles we came out on a ridge of karst outcrop called the Devil’s Finger.

Imagine the Alps without the Italians. Our beautifully liveried UAZs parked high on the side of a ledge, the landscape below, stretching off to distant snowcapped peaks was carpeted with an almost unbroken vista of trees, gently changing to all shades of rust and russet in the early autumn light. It looked like what our distant ancestors would have seen as they stepped out of their caves. The landscape is not quite an untamed wilderness though, it’s criss-crossed with logging trails and fishermen’s routes… and this region of southern Adygea was where we were about to spend the week exploring.

Back down in the valley, looking for a way to cross the wide and lazy river, our track took us through a field. It didn’t seem too much at first but it was made for tractors, littered with rocks, the road had to be negotiated very carefully. Unseen in the long grass, I caught one and got the axle beached. The horrible grinding noises made getting off sounded terrible, but the UAZ is a tough little machine designed for the rigours of Russian driving. The setting sun through the tall grass made for some great photos. In the half dark, there was a broken bridge that we had to cross. We both needed spotting over the smashed pieces of concrete that was all that was left of it and Gennady chose a strange angle for me to ease over. Not knowing what was under the wheels was quite unnerving, as I worked across the bridge, it was at that precise moment that an oak tree decided to let loose a few acorns onto the roof. The noise sounded just like something in the transmission snapping. Minor heart failure on my part, and then we were over. Even though the A/T tires aren’t that aggressive and the Patriot feels rather agricultural, it never got close to getting stuck, no matter where we took it. This is no trip for beginners though, you’ll need a good understanding of what a 4×4 can do to tackle this tour.

Making a good off-road route is all about challenge and reward. Over the river, with the water lapping over the lights so I was temporarily blinded in the middle, we parked up on the pebbles on the opposite bank to go to the nice restaurant on the other side where we dined on shashliks and tea made from local herbs… a combination that would become a theme of the trip.

My favorite day was in the little village of Arkhyz. Despite being in a valley surrounded by snowcapped peaks it wasn’t cold, yet the cafes had stoves burning so the whole place had the lovely pervading aroma of wood smoke. To get to the off-road trail into the mountains the choice was either a dodgy looking wooden bridge or a rather deep river crossing. For the photos we did both! And it didn’t get much easier either. It wasn’t long before we needed 4L to pick a line up a very rough hill and we saw why it was in such a bad condition when a massive KAMAZ logging truck came sliding around the corner at what seemed like Dakar speed. With muddy pools, side slopes, having to choose lines between the rocks and over deep ruts that needed straddling, and even a hundred yard long section that went up the river, the four mile route had everything to make it a mini-expedition.

For normal 4x4s the trail ends up at the beginning of the hiking route, Gennady spotted me into the river around a huge granite boulder so we could get as close to the glacier as possible. That ended up being the end of the line, with snow lying in deep drifts we couldn’t get any further, so turned around and had a picnic nearby with the most breathtaking mountain backdrop instead. Gennady struck up a conversation with a weathered-faced shepherd who was looking after his herd of cows. Gravelly voice hardened by a good half century of chain-smoking he called out commands to his shaggy vicious looking dog, but still posed for a photo. It was an incredible place to visit but I couldn’t imagine what a harsh life it must be to live and work there.

Back down the trail, the wooden bridge over the fast flowing river sagged worryingly as we inched over but on the other side we found a local guy who made some delicious lamb shaskliks for us. Drinking tea with herbs picked from the valley while sitting in the BBQ smoke of your own dinner is a great way to work up your appetite. 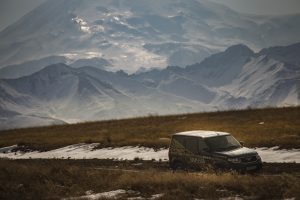 The biggest mountain in the Caucasus, and in the whole of Europe, is the 5642m high Elbrus, which is a long-dormant volcano. The gravel road lead us through some barren steppe country with just a few forsaken-looking farmer’s villages dotted here and there, but Gennady knew which random tracks led over the hills to dramatic viewpoints and the UAZs parked at the top of precipices makes for great drone footage… Through a stunning 100m deep gorge the track headed up through deeper and deeper drifts of snow and fallen rocks until we slithered our way up over another rickety bridge… where we came across a perfect tarmac road. Apparently it was made so that the governor of the region can drive to his country house on the side of the mountain in comfort.

“Elbrus is right there,” Gennady said, pointing ahead, but the autumn haze made the horizon blank. As we got closer, I could just make out something shining in the sky. I couldn’t work out what it was, but a photo with a filter on the lens showed what I couldn’t see; it was the sun’s reflection on the wind-polished glacier that sits on the top. When we were finally close enough to see the majesty of the peak, it was an incredible sight. 600m higher than even Monte Blanc it was also properly cold… but I got warm enough later that night in a town called Kislovodsk when we went to a traditional Russian banya.

The last evening was in a plush restaurant with tea served from a large copper pot and plates piled high with BBQ’d meat, local cheeses and little meat pies. At the end of the trip I was in need of a shave and some sleep, but my full belly and mind was full of wonderful impressions and memories. It might have only been a recon tour but it was a real trip to remember!

The region: The locals say Adygea is Caucasus culture first, not Russian. The countryside is so underdeveloped it’s like looking a few hundred years back in time when villages in Europe were made up of drover communities and subsistence farmers. Get higher into the mountains though and the views are like the Alps back in the stone-age as there are some views where there’s almost no evidence of human activity. Off-roading in endless oak forests, the like that haven’t been seen in Europe for a thousand years, is something rather special too. Especially in autumn where the colours are simply gorgeous. 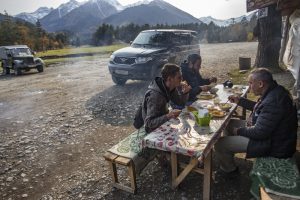 Drive to Russia might not be grammatically correct, but the company know exactly what they are doing with a group of people in 4×4’s. With nearly twenty years of experience running much bigger expeditions in countries such as China, Uzbekistan and Kyrgyzstan, a week long off-roading holiday is well within their capabilities. The Western Caucasus Mountains in the rugged foothills of Europe’s tallest peak make for one of the most stunning places I have ever had the pleasure to explore. But as rough as some of the trials are, as inclement as the mountain weather can sometimes be, there will always be nice hotel with a soft bed waiting for you every day. And if Gennady is in charge he is a brilliant guy and knows everything about the country as well as being an off-road expert.

A factory standard UAZ Patriot is certainly not a Land Cruiser, but it is still a very capable Russian-made 4×4 and once you get used to the rather loose steering, the wide spread of gears and noticeable lack of torque it’s fine to drive. The overall experience is quite similar to a Land Rover 90. 4L is just a button away for all the tough stuff, which on A/T tires is enough to handle everything on the tour. The full fleet are brand-new vehicles. Mine had 15,000km on the clock when I picked it up in Moscow…. A few more when I gave it back again. 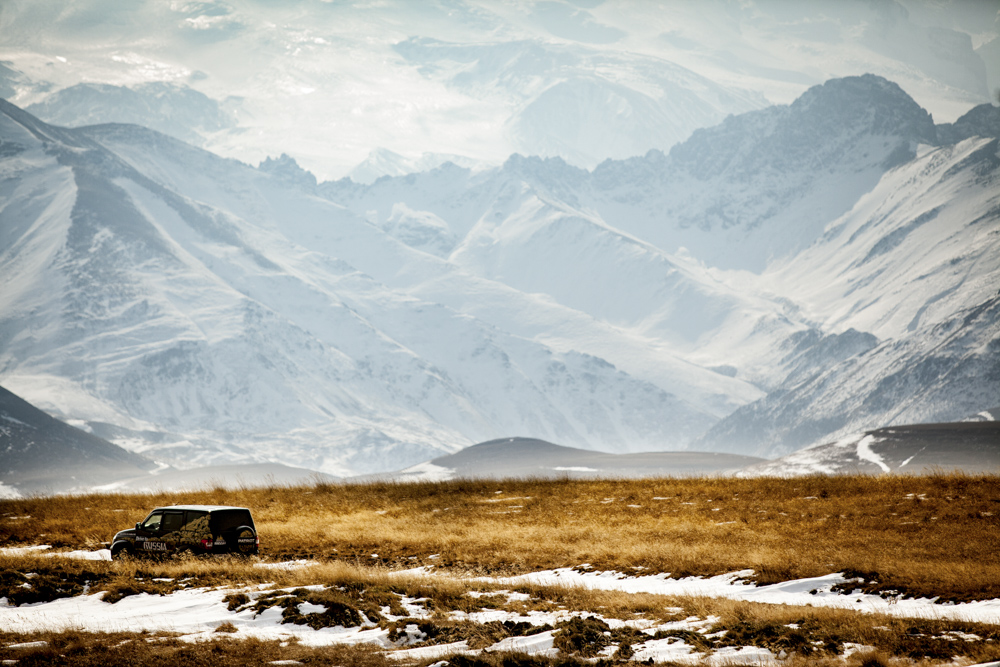 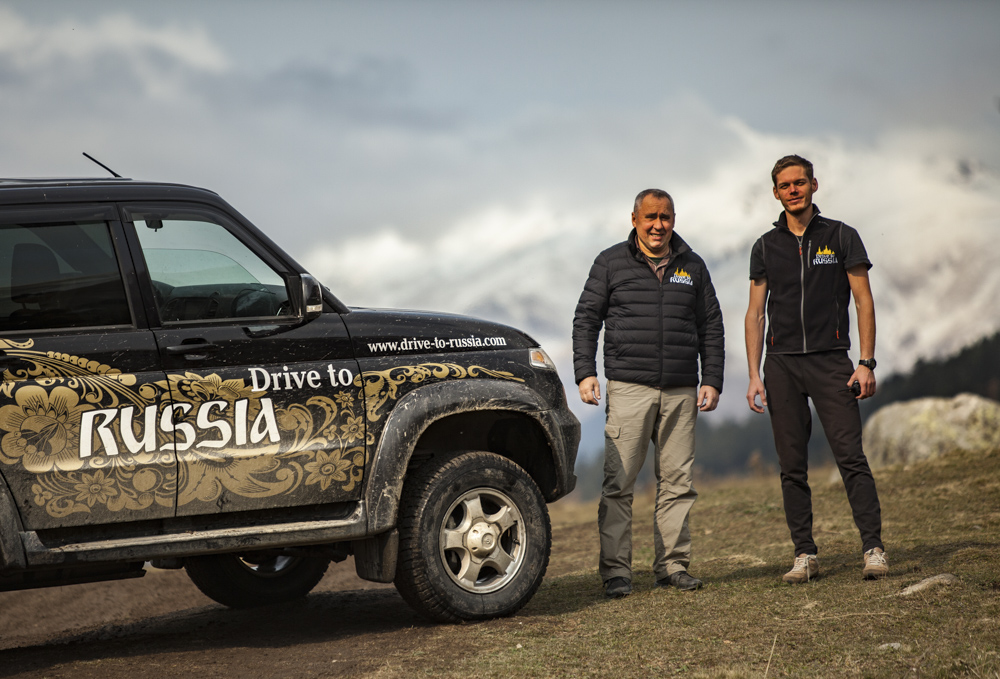 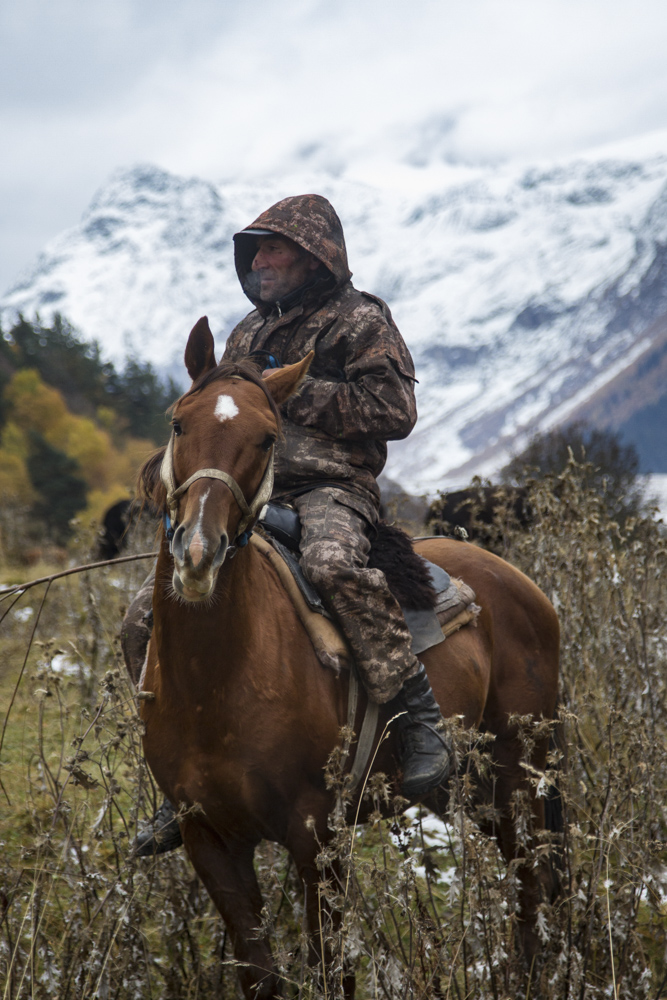 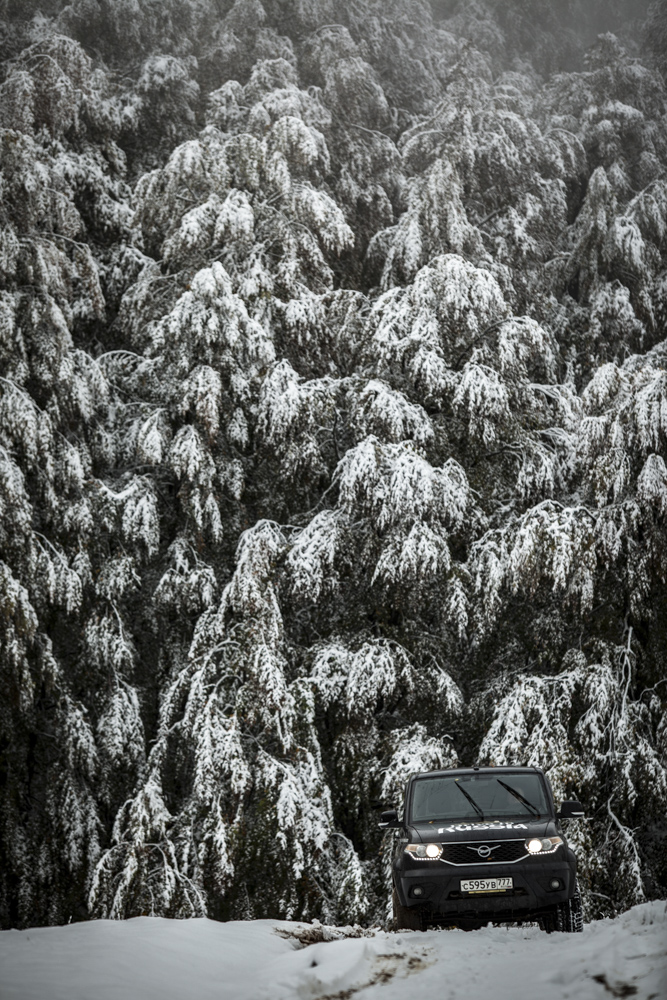 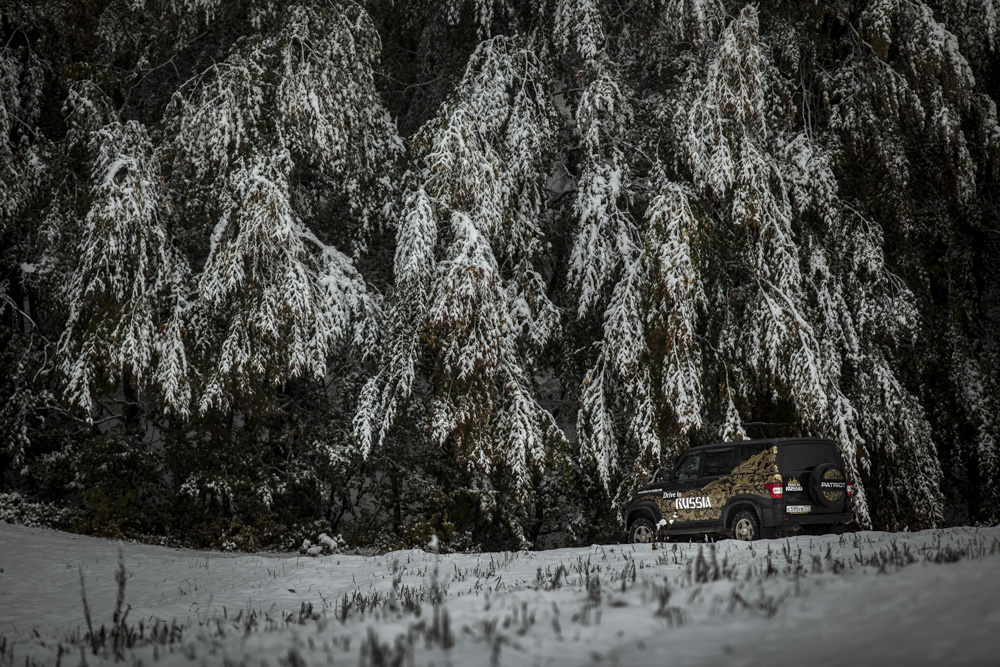 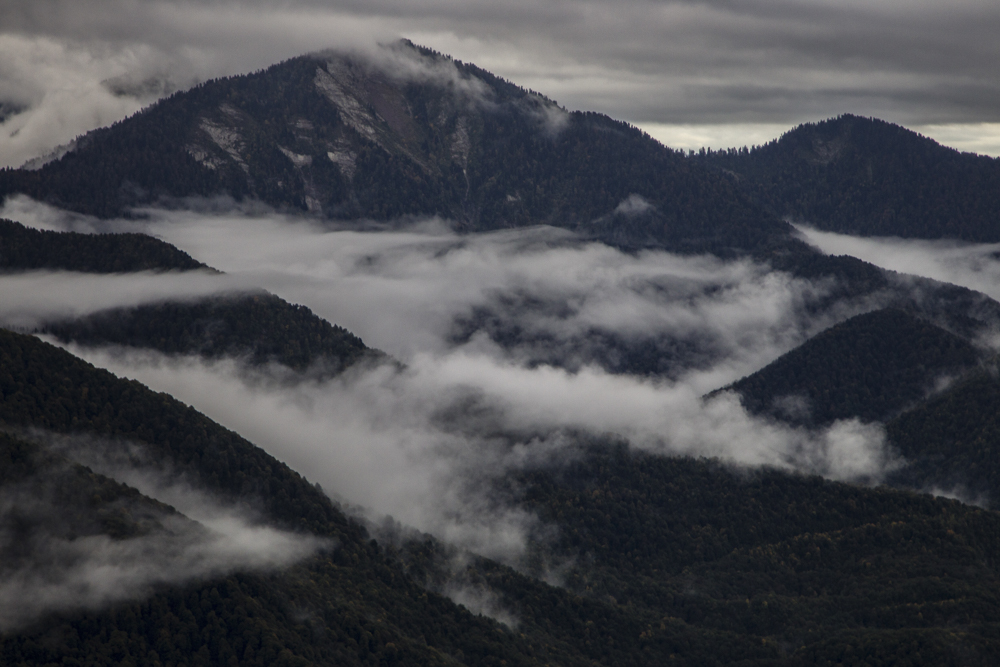 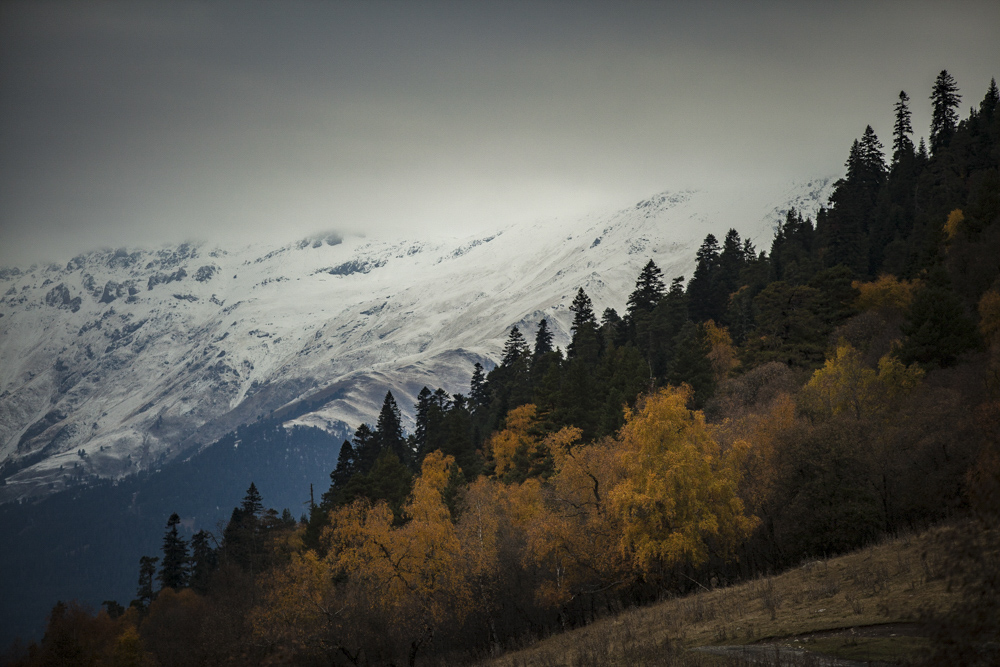 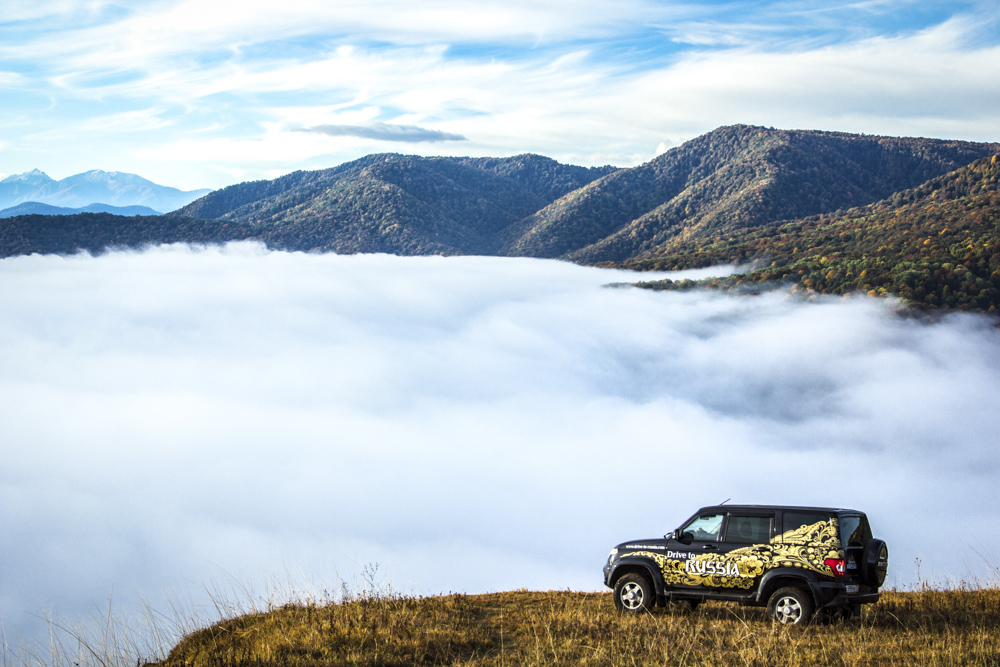 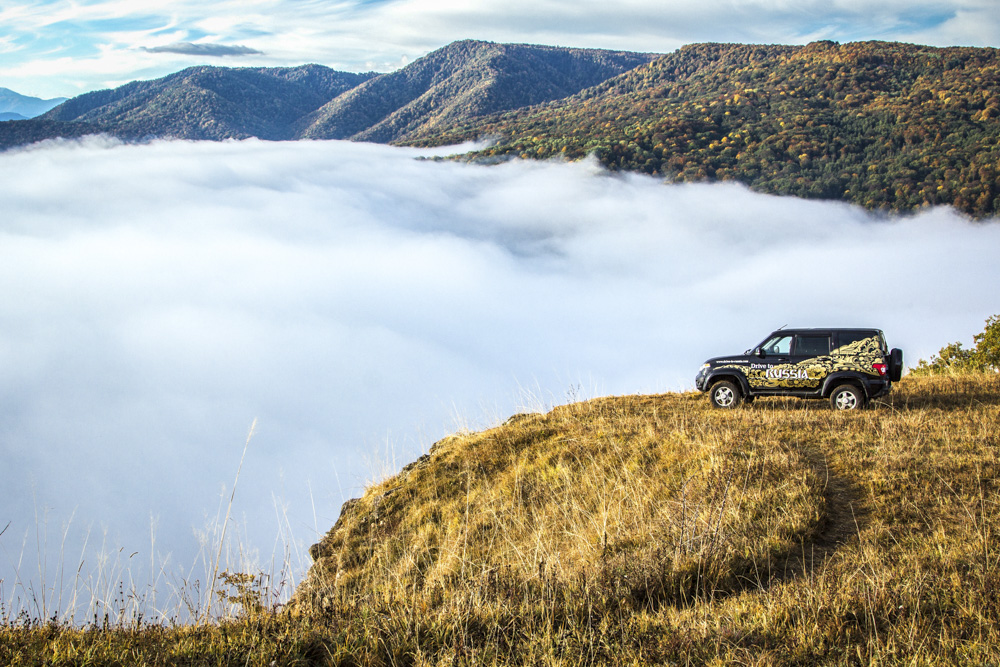