The only way I can come up with to tell this story is to explain that this was originally built 13 years ago…so, as you read the story, if some of the time references seem off, it’s due to my memory. 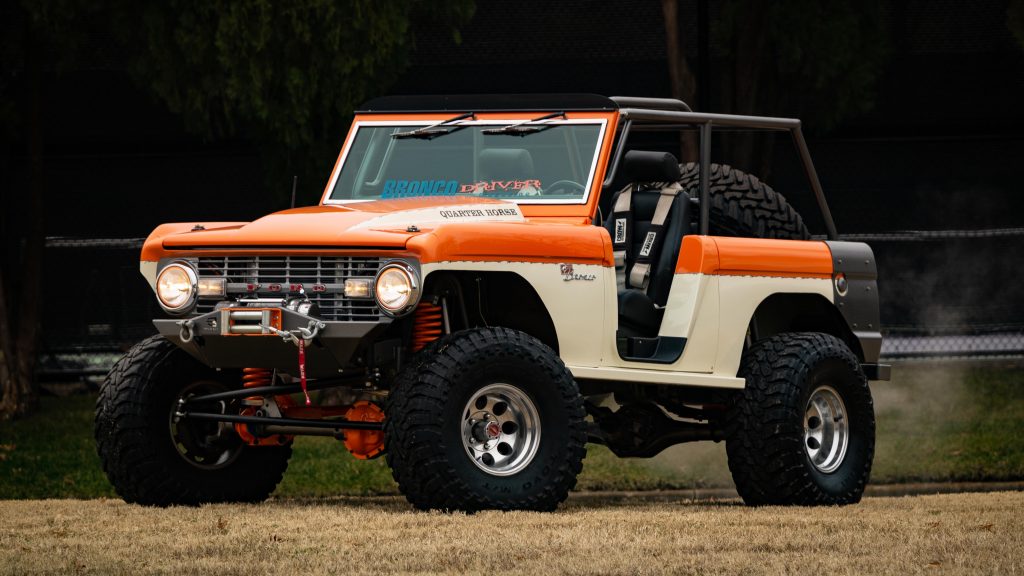 Bailie Bilt was still a “Hobby Shop” at the time, something to keep busy with between remodels on our rental houses.  I think we already had the front and rear bumpers at the time and were perfecting our roll cage designs.

I first met Dale through a referral from one of the local 4×4 shops that was big into Broncos.  We first did a few bumpers and then a cage in the Bronco he owned at the time.  If didn’t seem too long before a friendship started.  We would go out to some of the local off-road parks with the rest of our “crew”.  Dale quickly discovered his rig was a lot better on the streets than the rocks. 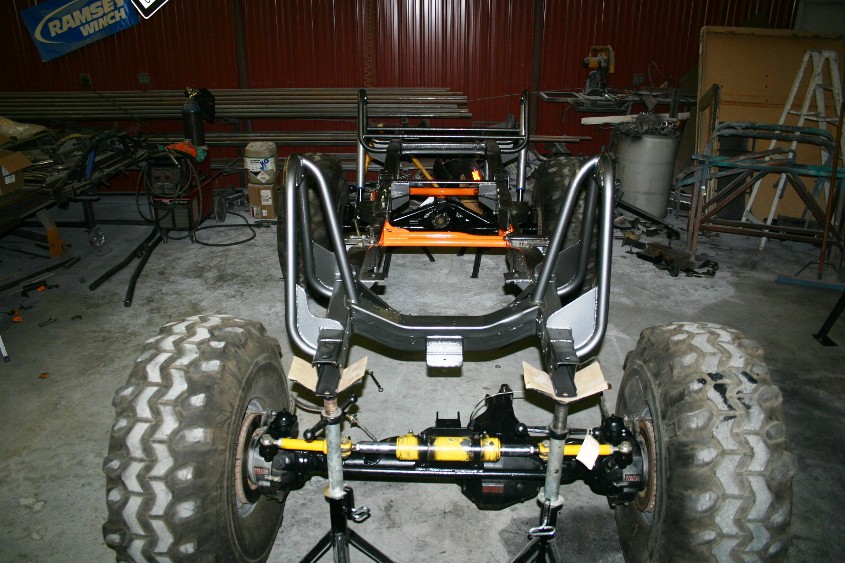 Conversations started quite casually…”I think I’d like a real rig.  Can you help me?”.  He really wanted something that he’d look good in on the trails, so we determined aesthetics were important.  A few weeks later, Dale found our subject Bronco, a 71 U-15 Sport.  My first step was dismantling and sending it to the sand blaster.  It was rusty, so replacement panels were ordered and installed.  All through this process, we were constantly talking about the drive line, engine, transmission, transfer case, and of course, the axles. 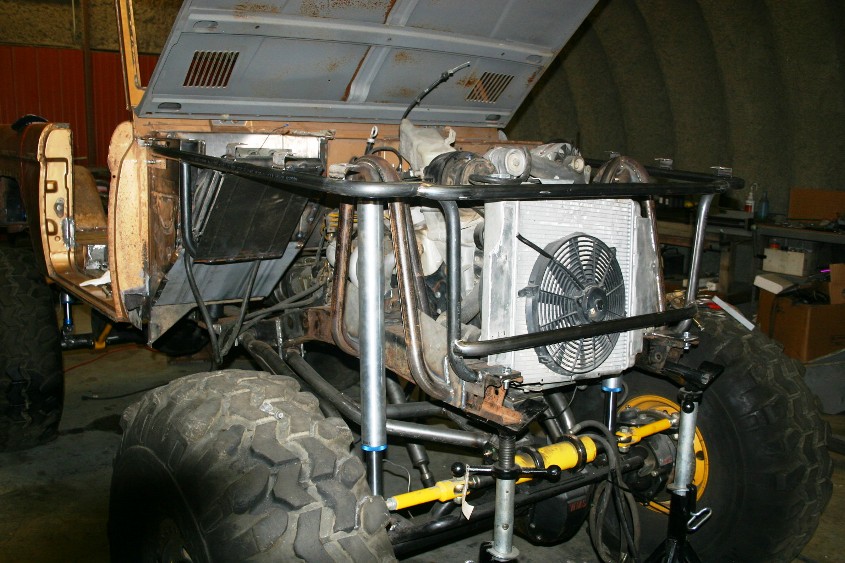 The last week of body work, as I remember, I get a call…”Hey, you around the shop?”  Soon, Dale shows up with this Jeep, a big yellow, in your face kind of a Jeep.  Glowing like a new papa, Dale explains his plan…We’ll take the body off the Jeep and replace it with the Bronco body.  Me not knowing much about Jeeps, it sounded doable.  We sat there talking through the swap and I looked at Dale and smarted off, “You know this will only be 25% Bronco if we do this…”.  The name was born – Quarter Horse.

Several weeks go by, and “we” are trying to mate the Bronco body with the Jeep chassis.  As we found out the Jeep chassis is triangulated and has great big humps in the rear for the rear axles, the Bronco chassis is really flat in comparison.  I called Dale and had the conversation with him…we are either going to carve up the Bronco body that he just paid me to put all new sheet metal in or we need to look at Plan “B”, switch all the drive line components over to the Bronco frame. 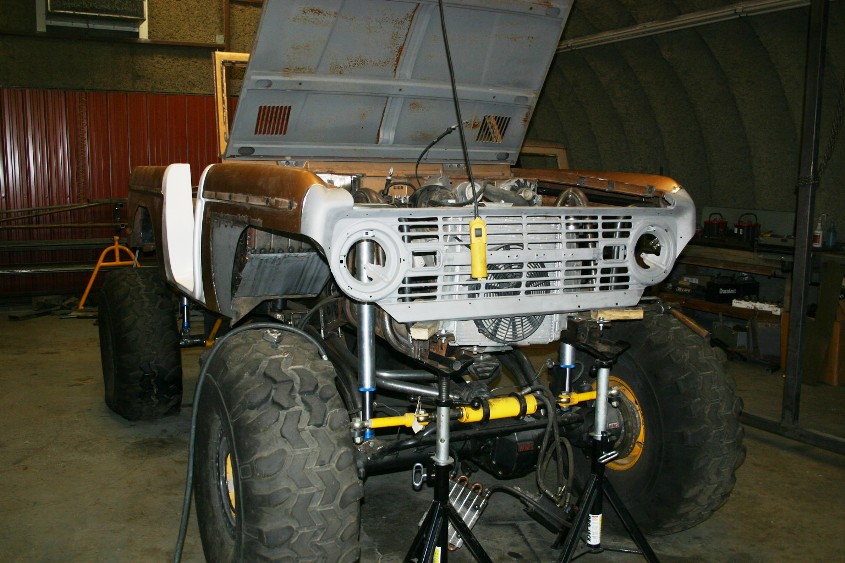 By now, the name stuck and Dale was on www.classicbroncos.com keeping everyone up-to-date with our build.

So, the Chevy engine and 700 R4 and 5 il Atlas were switched to the Bronco frame then the big axles were to be moved over and the front/rear links were moved over and modified to fit the frame.  At the time I didn’t know much about links or how they really worked.  So, in went the links so that everything was assembled.  Then blow back apart for paint and powder coat. 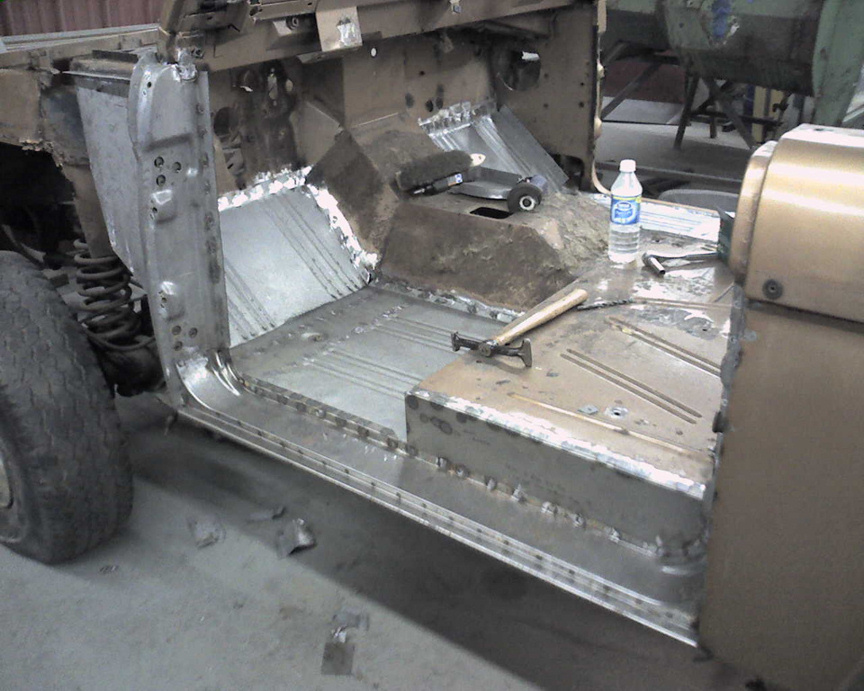 We start doing the “run in” on Friday afternoon and it completely fills the shop with smoke.   We shut everything off figuring out that one cylinder has 6 # of compression (blown).  By that time, it was 6pm on Friday night and we are supposed to leave for the Round-Up Tuesday morning. 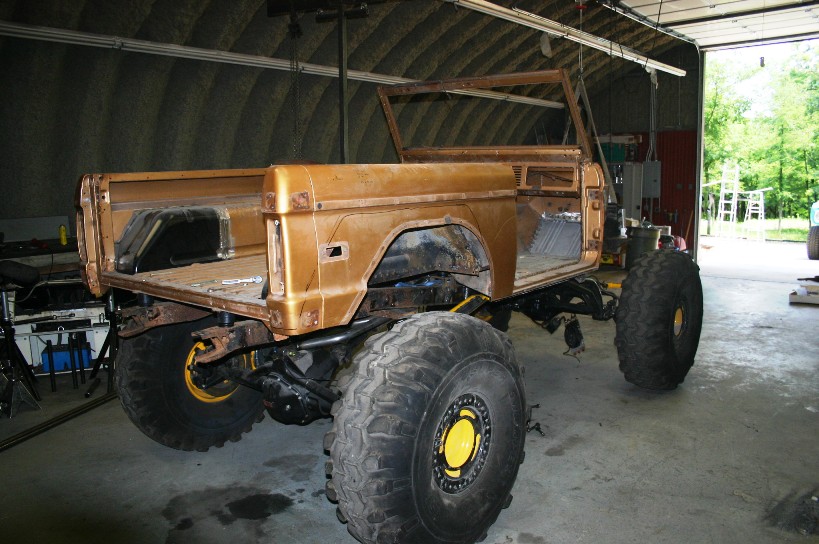 Favors called in to a local GM dealer who was able to get us a GM Performance crate engine located and purchased on Saturday morning.  We all started pulling the old engine Saturday morning as another guy heads to the dealership to pick up the new engine.  Long story short, we fired the new engine up on Sunday afternoon.  A few minutes later, the engine fills the shop with smoke AGAIN…we all panic and shut it off!!  Shortly after, we realized we were burning the oil stuck in the exhaust system.  A big sigh of relief! 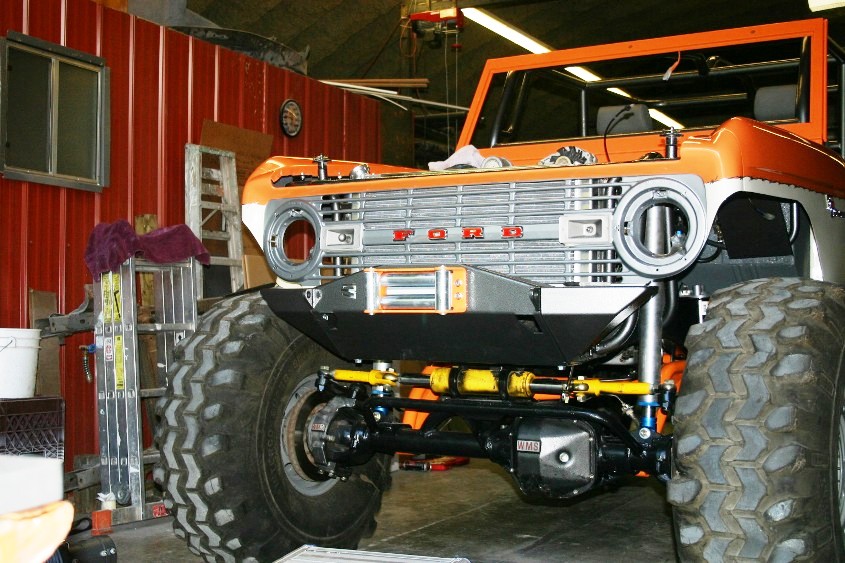 Now we are to changing the struts and loading up.  Right, well think about it, 13 years ago we were all using those struts that top charged only that want to extend only …coupled with front and rear wishbone 3-link and some bad geometry, well you can tell the suspension was not well behaved.  Our test run was on the trailer…

Dale and I pulled into OCBR a day early to have some test and tune time.  It proved itself to look very commanding, traction wise.  It drove over everything it was pointed at, this rig had body roll from hell!

Well, we survived the Bronco run and our conversations started leaning toward going to a coil over or this new concept ORI strut??  Decisions…Decisions!

Quarter Horse was “stabled” for a while as research was being done on suspension components that may help or fix the issues.  The completion of this project falls on the back burner as Dale’s business was heading in a new direction and he may have to move.  He ended up making the decision to sell Quarter Horse based on the now imminent move. 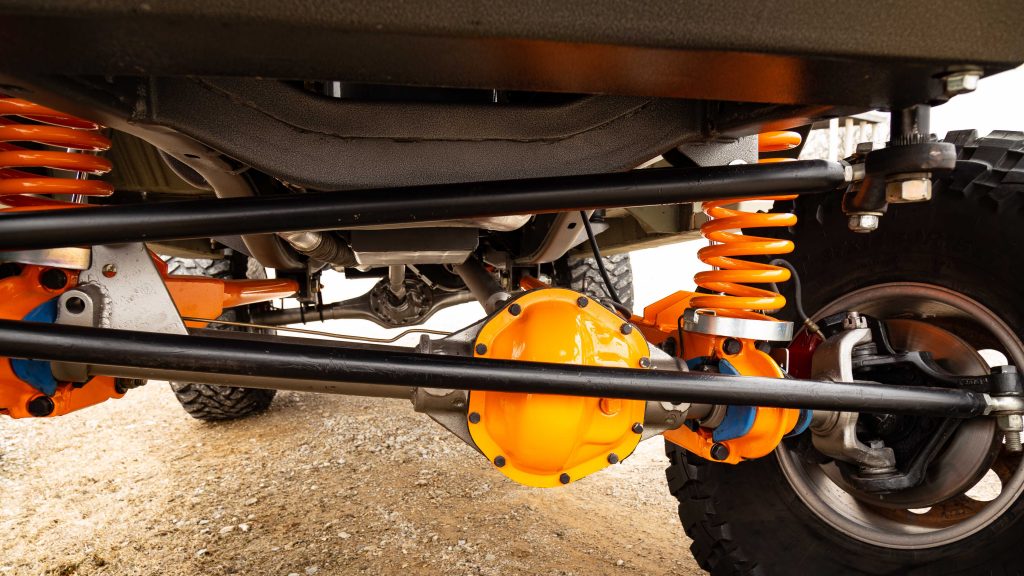 A few weeks later, it was on back in my shop, under new ownership.  I advised that he really needed to let me change the struts to an ORI style to tame down the body roll.  That was done, and Quarter Horse was sent off to live his life in Monterey, California.

Skip ahead 10 years…I get a call in mid-January from the owner, letting me know he is getting ready to sell Quarter Horse.  It had been in storage all this time.  I told the owner I would help him find a buyer and he had a great local market he could tap into but we weren’t really in the market to “buy back” builds.  Most of the year goes by and the wife decides she wants a trip to Monterey as her Christmas present.  Literally within a week of the trip, this guy reaches out again.  I talk my wife into taking a little detour and checking out the condition of Quarter Horse.  Well, that’s all it took…Quarter Horse would head back to Oklahoma. 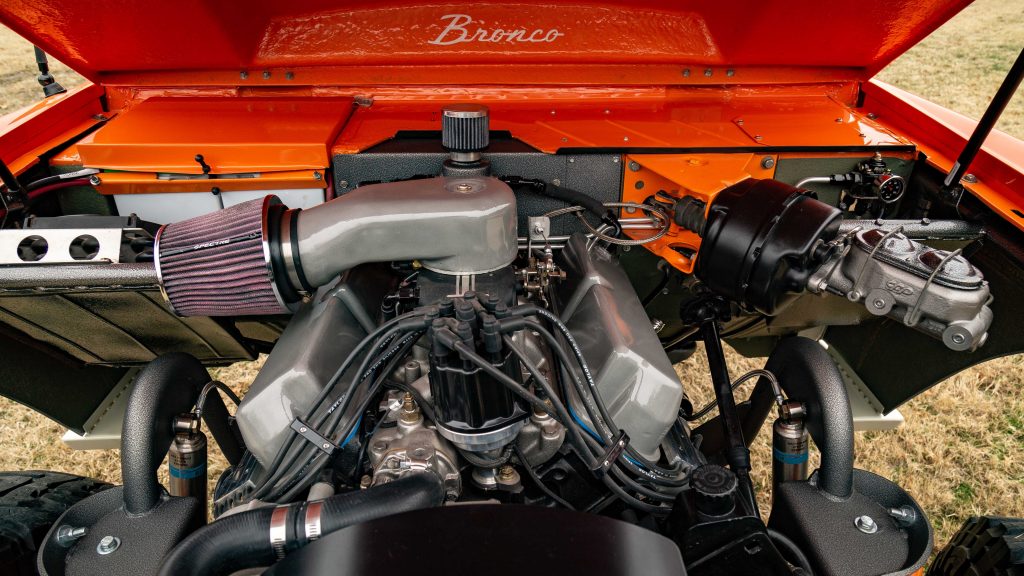 Through the years, this build has come to mind and in conversation during type of mentorship with JG and SS on the link suspension and how to make them work for you!  Jokingly, I’ve said I would love to get Quarter Horse back to fix it…well, here’s my chance.

With the crazy Bronco market, it was decided to go for a street friendly/light trail ride re-build.  The plan came together fairly easily.  And, what made me know this was the right decision to make these modifications?  On a recent trip out to Trail Hero (Hurricane, Utah), local friends were swapping their full width 9” and Dana 44…problem solved!  Now I have (2) locked and disc built axles with 37” wheels and tires. 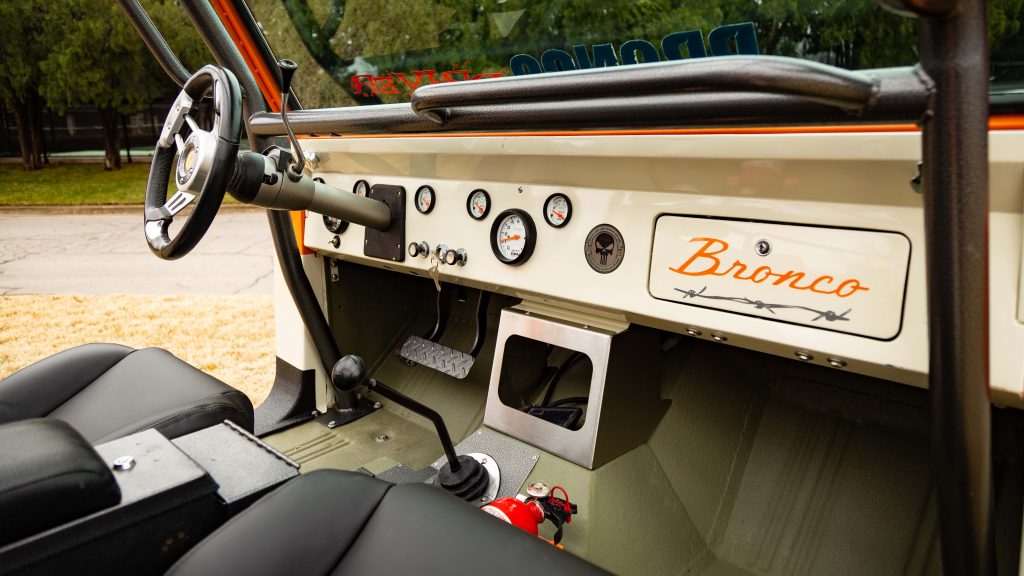 Part of the benefits (?) of my job are the “customer discards” and swapping of parts…this provided the engine, a C-4 take out (that needed some love) and a D-20 transfer case.  And that was what was needed to make it a true Bronco again!

Cleaning up the frame was pretty quick…weld up the holes that are not needed.  Then I move to the spring buckets and hangers to match the wheel base, then I built the shock brackets.  Then it was time for the sand blaster again…then down to powder coating.  Knowing this was going to be sold, my powder coater blocked out the VIN# on the frame and just used clear over the VIN plate.  Awesome detail.

In our last “go-through”, we discovered the wiring was kinda doubled-up.  So, re-wiring was in order!  Quite a bit of the original harness was engine specific, so that was sold with the engine. 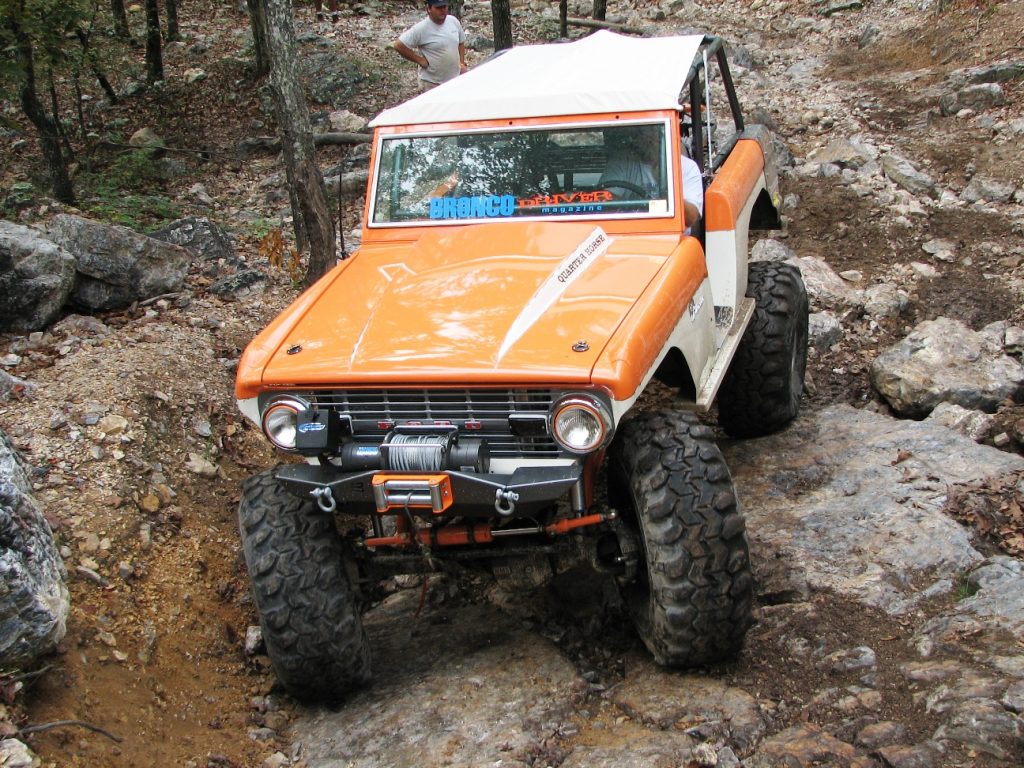 It’s always an exciting time to mate the body and chassis.  So, off with the old and on with the new!

Now for all the “finish up” work…this is when we were told it would be a great fit for the Mecum Auction…WHAT???  It’s a Bronco…and, look at some of the fancy on those auctions!  A friend of mine who builds for these types of auctions helped me by introducing me to his broker as well as giving me several tips!  I met with the broker, Jim, and he didn’t get the extent of the build.  After several conversations and a short amount of time on the creeper, the light turned on.  Fix a couple oil leaks and make it presentable…

You know you have some good guys on your side when the auction decides to start 5-hours earlier than their original plan!  We got in by the skin of our teeth…but…WE ARE IN! 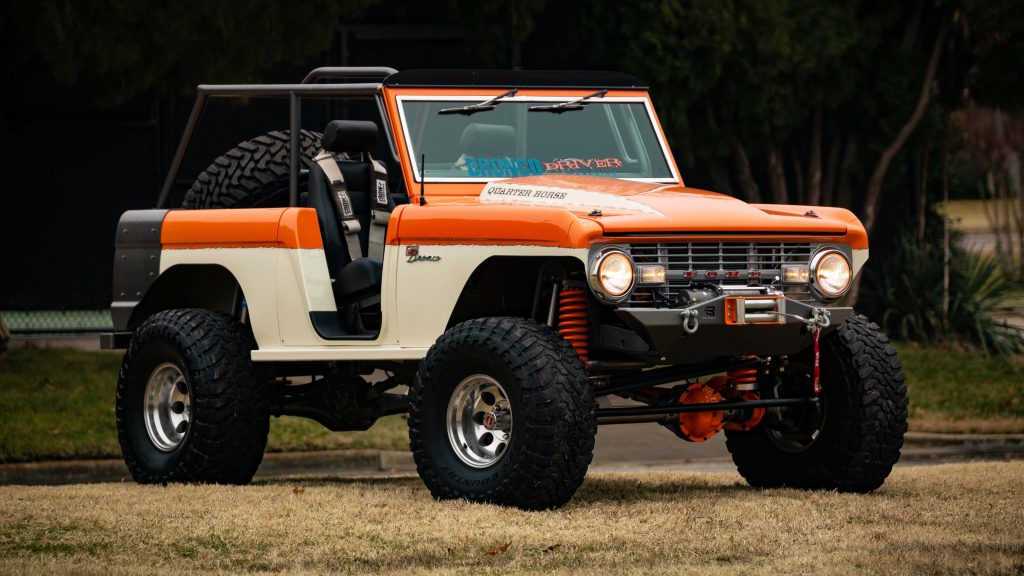 As of print date, the Mecum Auction just completed, can’t wait for an update to see if Quarter Horse found a new loving home. The lot # is T-102…the “T” means Thursday…the first day of the auction (NOT the best). Very exciting and NEW times for Bailie Bilt.